DOC NYC: Barbara Kopple on Her True Crime Tale, A Murder in Mansfield 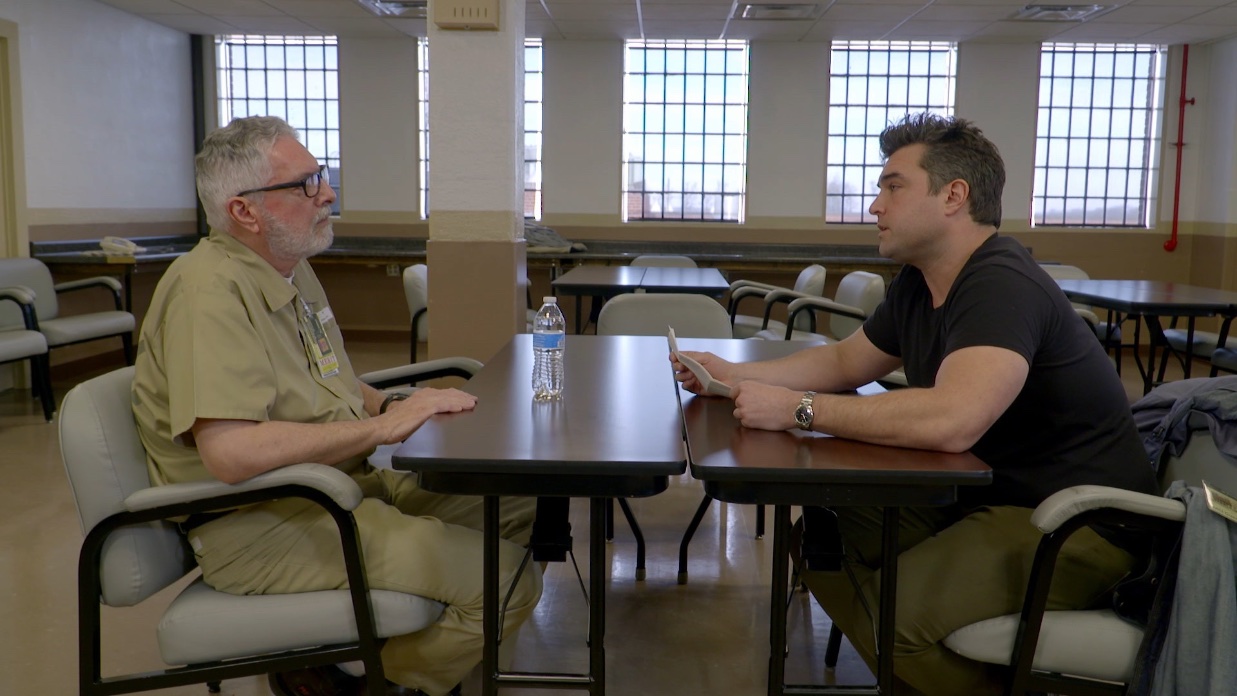 A Murder in Mansfield

by Soheil Rezayazdi
in Directors, Interviews
on Nov 12, 2017

“A friend of mine has this absolutely fantastic story that we should all do together.”

Morrissey wanted to pitch Kopple a film on Collier Landry, an L.A.-based filmmaker whose mother disappeared in 1989 when he was 11 years old. Twenty-six days after her disappearance, her body was found beaten, suffocated, and ultimately buried beneath the basement of the family home. All signs pointed to Collier’s father, a prominent doctor and unabashed philanderer in the town of Mansfield, Ohio, as the murderer. Collier went into foster care and testified against his father during the trial. The jury found him guilty, and with that Collier lost both parents in a matter of months.

Kopple’s film, her second this year after This Is Everything: Gigi Gorgeous, follows Collier as he returns to Mansfield to make peace with his past. His chief target, of course, is his father, who remains in prison and still maintains his innocence. Set against a brutal Midwestern winter, A Murder in Mansfield takes the form of a true crime saga to depict the insidious effects of childhood trauma.

Kopple spoke with Filmmaker ahead of the film’s world premiere tonight at DOC NYC. The two-time Oscar winner discussed her approach to documentary production, interviewing a sociopath and the power of small talk.

Filmmaker: The film opens with a montage of local news footage and images from the trial itself. In the news footage we see Mansfield citizens describe the trial as “better than a soap opera” and “just like a movie.”

Kopple: It was like a circus in Mansfield during that time. Nothing had ever happened to this sleepy town. People were standing outside trying to get into the courtroom. It was on TV every single night. Also this was a very well-respected doctor. He had a lot of patients and a lot of charisma. People couldn’t believe that he could do something like this. I think the finding of the body in the house under the basement floor with the plastic bag over her head really tipped the scale. He never admitted that he diabolically planned to kill his wife.

Filmmaker: Those quotes about the “soap opera” and the “movie” right at the start of the film made me wonder about the entertainment value of true crime stories, which seem to be having a moment right now. What do you think attracts people to true crime?

Kopple: I’m not really sure. I don’t look at this as a true crime story, although it is. I really look at this as the story of this kid named Collier Landry and what happened to him — the trauma and the residual trauma that falls on so many people. We already knew who committed the crime in this one. It’s not a search.

Filmmaker: But there is some mystery involved about whether it was intentional or an accident. I ask this question because at DOC NYC it is billed as a “true crime” film.

Kopple: Yes, it is. We will have to let an audience see it and see what they think about [his innocence]. To me, the evidence of listening to Collier and his adopted sister, who was only three at the time, says so much, as does the autopsy report. In it she says that they “wrapped mommy up like a snowman.” Collier heard a thump and pretended to be asleep because he was afraid that if his father came into his room and saw that he was awake it would happen to him also. So he just pretended to be asleep. In the autopsy report it says she’s been hit with a blunt object on the back of her head and yet the cause of death was suffocation.

Filmmaker: Although the film has some of the hallmarks of a true crime story, to me it felt more like a portrait of trauma and its lasting effects.

Kopple: That’s a true statement. It’s also about how to cure that trauma. It becomes clear that Collier needed to see his father again and get the truth. You really want the full story about what happened to his mother.

Filmmaker: All told how long were you in Mansfield with Collier?

Filmmaker: And was this a single trip or multiple trips?

Kopple: A single trip. He went down a month before us in October to see if he could find any of his family and see if people would talk to us. He also shot some things on his GoPro. Then we came down in December.

Filmmaker: That stark, Midwestern snow adds a lot to the film’s atmosphere.

Kopple: It was so cold. So cold.

Filmmaker: And course the murder itself happened in the winter. Was it an intentional decision to film during the wintertime?

Kopple: No, it just happened that way.

Filmmaker: I’d imagine the images would have a much different feel if Collier had visited Mansfield in the summer.

Kopple: It would have taken on a different feel. You’re right. But then we could have shown all this beauty around him with this person just being alone [at the center].

Filmmaker: Collier’s very striking testimony against his father as a child exists on video. I was curious if this footage was a deciding factor for you to make this film.

Kopple: It was that footage, but also the material that we shot in the field. I knew it couldn’t have been a 42-minute film. We would have lost too many wonderful things. We tried to let the scenes play out. The scene with the Messmores, the scene where he sees his mother’s autopsy pictures for the first time, the scene with his psychiatrist, the scene with his father in prison, the scene with the Zeigler family — it was just so much. We wanted to get a feel for how much this community loved him. Even on the radio people calling in and saying, “Collier, we’re so glad that you’re okay. We’ve all been praying for you. We love you.” This just toppled a whole community. He was loved. He maybe didn’t know who all these people were, but people on the streets would stop him.

Filmmaker: You mentioned that the footage in the field made you realize you had a feature on your hands. Did you not think of it as a feature when you began filming?

Kopple: Well, I never do. I think of it as a film you want to do and you don’t want to leave a stone unturned. You want to get everything you possibly can and not think about whether it’s going to be a long piece or a short piece. You don’t want to miss anything.

Filmmaker: The film opens with a six-minute sequence of entirely archival footage from the trial and local news. Can you discuss the decision to open the film in this way?

Kopple: To me, it was the beginning. It was really seeing who these characters were in their rawest form. To see this 12-year-old boy seemingly giving testimony as if he was in his 30s. He’s so clear. I was just blown away by what he said and seeing his father as a sociopath. He had nothing in his eyes. He was just scribbling doodles on a piece of paper. You felt nothing from him: no outrage, no passion, no anger. Just nothing.

Filmmaker: You mention the word sociopath. Collier asks his father at one point in the film if he believes he’s a sociopath. Do you think he is?

Filmmaker: What was the solo interview with Collier’s father like for you?

Kopple: It was a little creepy to know that I was interviewing him. I wanted to give him a space to really talk about himself, to look at himself, to tell us what he was like as a young boy, how he grew up, what he felt about his son and his family. That was something very important because I don’t do “I gotcha” films. I do films where I struggle to explore who people are and allow them to tell us who they are.

Filmmaker: How many cameras and how much time did you have for this climactic scene?

Filmmaker: What do you think that experience did for Collier? As a viewer, you watch it and it’s almost anti-climactic because you want the confession and you don’t get it.

Kopple: I think that Collier really understands that he’s never going to find out what happened. Maybe after all these years his father really believes his story. But Collier doesn’t believe it. There’s only so much that you can do. I think it makes Collier so much stronger because now he’s maybe going to be able to let go of ever finding out the truth or having that reconciliation with his father. His father saying, “I did it, I’m sorry. I know that I’ve caused you so much pain.” That’s not going to happen in a way that’s real. I think sometimes being a sociopath means maybe you go through a lot of therapy, but maybe the therapy doesn’t help you. You use it in your mind to be more manipulative. I think Collier got that, and I think also for Collier it was a sense of really being brave and confronting his father in a way he had never done before.

Filmmaker: For much of the film we watch Collier as he meets people from his past: his foster parents, his mom’s best friend, his father. To a certain extent he’s prodding them to speak like a documentary filmmaker would an interview subject.

Kopple: These are all people who Collier knows very well. The Messmores he was very, very close to. He really wanted them to be his adopted parents. Also the Zieglers, who became his parents. Collier and I discussed lots of things, but even if Collier wasn’t there, I really love making films where people bring things up and then you take them around on that path. If you go there with an agenda, that stifles the film. It doesn’t let the film breathe. It doesn’t allow these people to find each other. I like to see where it goes and see what memories come up.

Filmmaker: So did Collier dictate the people he met in Mansfield?

Kopple: No, it was who would talk to us. A lot of people didn’t want to rehash this drama. We tried to get his sister Elizabeth, who changed her name, and she wouldn’t get back in touch with us. We tried and we tried. These are the people who meant a lot to Collier and who allowed us to film.

Kopple: Well, when he was talking to Rusty at the radio station about the weather, he was freezing. He came from Southern California, where it’s really warm. This had been some of the coldest weather: December in Mansfield, Ohio. It was below zero or three degrees. We would jump up and down if it was 15 degrees. It was freezing out there. With the father, I think the father noticed Collier had on a t-shirt and wasn’t wearing warm clothes or a jacket. Usually they never talked about the nitty gritty. They never got deep. They talk about things that are very much on the surface. On the surface might be a ball game or the weather.

Filmmaker: I think that’s often the case with anyone and their parents. Parents love to talk about the weather.

Kopple: Sure, to get through to a place where you can say what you really want to say.