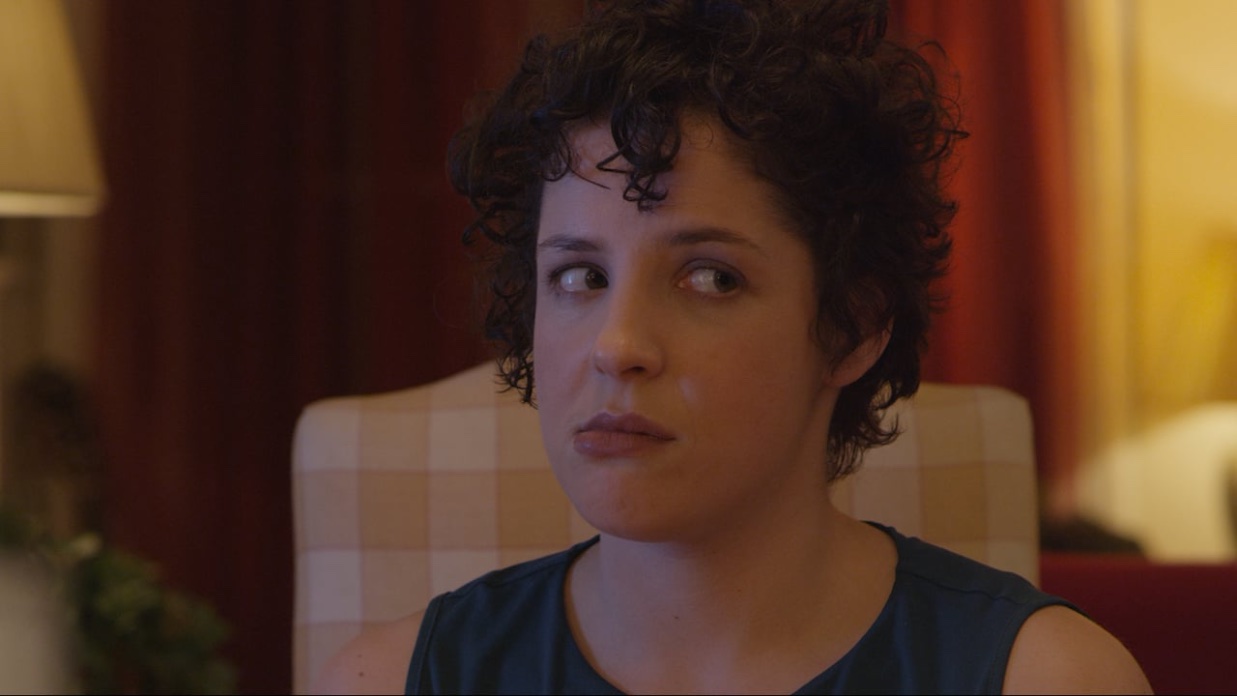 Sante Fe has archeological sites that date back 13,000 years. As we drove to my hotel from the Albuquerque airport, almost an hour-long trek at midnight, my driver told me about the history of the city, rooted in Native American culture, that I had no idea dated that far back. “History doesn’t repeat itself but it often rhymes,” Mark Twain supposedly said. After spending a weekend at the Sante Fe Independent Film Festival, the thought felt applicable — the lineup of films demonstrated the cynical nature of oppression, struggle and minority battles that indeed continue in familiar patterns. Set on the soil of ancient stories and epic wars for what we all call our “homeland,” the festival illuminated the need to re-write history and suggested that perhaps art can be a part of that penmanship.

“It took a lot of smart programming and strong guests that have made a serious impact on independent filmmaking,” commented Festival Director Liesette Paisner Bailey about the festival’s growth over its nine years. Bailey was just 19 when she started SFIFF with her brother, Jacques Paisner, co-founder, David Moore. Since 2009, the festival has expanded to screen over 100 films in its five-day span and turn out an impressive audience of locals and film lovers. The fest is centered in downtown Santa Fe, where all of the buildings are constructed with adobe bricks in warm earth tones. The architecture, settled between peaked mountains and big skies, is protected by city law — no one can build outside the historical mostly Spanish Pueblo and Territorial styles. Many regional film festivals support films made locally, but not many of them put such emphasis on films with themes and discussions relating to the intrinsic stories of their city. “We try to find films that represent the experience of women and minorities on camera,” Bailey explained. “This is why we thought it was important to screen films like For Ahkeem, Most Beautiful Island, Sami Blood and Pinsky.”

In Pinksy, an impressive and lively debut from director Amanda Lundquist and writer/star Rebecca Karpovsky, we have a keyhole into Russian-American life. It’s a combustive and comical look at generational gaps, the disintegration of tradition with every new grandchild, and the difficulty in which a queer woman has to navigate familial pressures. It packs a loving whack upside the head at how our family’s ideals can mess us up. This was Pinksy’s American premiere, and though it’s far from perfect, it made me excited to see a festival taking a chance on first-time filmmakers — and women, at that. Speaking of, Most Beautiful Island was also a debut feature from writer/director/star Ana Asensio and premiered this year at SXSW, taking home the Grand Jury Award. This film put me in a funk for 24 hours. It’s better to not know much about the story going in, but the brutal, and yet still accessible, portrait of an undocumented young woman in New York City was by far the most provoking experience at the festival. In maybe the most disturbing scene, Luciana (Asensio), pulls back the duck tape from her bathroom wall, and massive roaches trickle down to join her in the tub. And instead of running, she sits there and lets them swim at her feet.

Hostiles, director Scott Cooper’s sweeping Western, was paired with a centerpiece tribute to Wes Studi, who stars as Chief Yellow Hawk in the film. Studi’s career indeed deserves applause, with films like Dances with Wolves and The Last of the Mohicans jump-starting his decade-spanning portfolio. George R.R. Martin (Game of Thrones) led the tribute, a profound moment to have two deeply hardworking and talented artists share the stage. Martin owns the beautiful, quaint Jean Cocteau Cinema downtown where much of the festival was screened. As for Hostiles, Cooper’s past work has been skilled, if not highly male-centric. Yes, there are still guns in this film and there is still Christian Bale wielding one, but Cooper attempts to be more sensitive to his supporting characters and racial themes this time around — if not falling short. Captain Joseph J. Blocker (Bale), escorts a Cheyenne Chief (Studi) across the 1892 American frontier, meeting a woman along the way, Rosalie Quaid (Rosamund Pike), who has lost her entire family to an Indian raid. As specific as Cooper proves with Quaid and Blocker’s portrayals and their infinite, complex loss, the more general he is with the genocide of the time period. The Native American characters in the film, who share almost the same screen time, afford the same sensitivity and exploration as their white counterparts. Wes Studi most certainly does.

For Akheem, on the other hand, a lauded documentary that first premiered at Berlin, put its minority character front and center. Filmmakers Jeremy S. Levine and Landon Van Soest lace together Daje Shelton’s senior year of alternative high school in St. Louis. Gritty, a series of snap shots of Black teenage life, the coming-of-age story leads to the birth of Shelton’s child, Akheem. It’s a sobering look at the strength it takes to overcome the hardships that, indeed, rhyme and repeat themselves in these communities. “Landon and I were doing some work around education and were becoming increasingly alarmed and infuriated by what we read about the school-to-prison pipeline,” Levine explained. Given they’re “bearded white guys from Brooklyn,” they sought a strong partner and were lucky to meet and team with Shelton.

A panel at the Santa Fe Playhouse with writer William Broyles Jr. offered similar insight on tackling stories outside ones’ immediate experience. Known for his work on Cast Away, Unfaithful and Apollo 13, Broyles’ hour long Q&A with Kirk Ellis (John Adams) unpacked the often hidden intimate stories in his screenwriting. One might be surprised to learn that Cast Away was about his journey after coming home from Vietnam. He was less interested in telling his specific story. and more in using his experiences to inform a character’s emotional journey with God and isolation. With Unfaithful, Broyles argued endlessly with execs about Diane Lane’s character Connie, who cheats on her husband — even when he’s not abusive or necessarily mean. Broyles stood by the honest, if not puzzling to studios, motivations for his female protagonist.“The films that they would love to make, they’re afraid to make,” he says of many execs today. Indie filmmaking might be the only way a script like his Jarhead would ever get made today.

The festival was also interested in the space in which stories are created. There is something to be said of studying the product of art as much as the incubator in which its produced. Georgia O’Keeffe’s work later in life is so greatly colored by her time in northern New Mexico — some of her last paintings were done with the help of one of the members of the Lopez family, who took care of her estates. The shapes, the strokes, all evoke her surroundings and vice versa. In Memories of Miss O’Keeffe, director Chris Eyre layers a voice recording from a lost interview with the artist with a discussion with the Lopez family. As they unpack life with O’Keeffe, Eyre delicately introduces the viewer to the silence of the land, her whitewashed rooms and the sprawling views out their windows. The film excels in its simplicity, mirroring the quiet, calm life O’Keeffe built for herself. Many other selections also lay focus on atmospheric influence. Paris, Texas, screened in tribute to writer Sam Shepard, a Santa Fe resident and beloved writer who passed away this year. Fits and Starts, another female-directed debut from Laura Terruso, explored the ways in which cultural surroundings affect the creative process — how is it frustrating, inspiring, suffocating?

With tributes to John Sayles, Maggie Renzi and John Waters, artists who have paved the way for brave storytelling, the focus was heritage. John Sayles and Maggie Renzi’s films Lone Star and Passion Fish screened, as did Cry Baby and Cecil B. Demented, classics from John Waters. “The film is about you” — onstage during a Q&A, Sayles described how he always aims to make every performer on set feel like their character is crucial, special. He’s never been big on making autobiographical films either and is more fascinated with history and the buried stories within it. “I have to go this week,” rarely exists anymore in the filmgoing landscape, Sayles admitted, and cinema in general is becoming less remunerative for the filmmaker. But Sayles stays inspired, adding that where there is history, there is strife to be learned from. All movies are political, it’s just whether they’re conscious of it are not. John Waters — This Filthy World: Dirtier and Filthier roused the crowd in similar fashion on Saturday night at the legendary Lensic theater. Known for his decade-spanning antics, Waters continued to push boundaries in his discussions of gender politics. He seemed a bit worried about the next generation of spoken word and filmmakers — where are the artists that will follow in the same provocative footsteps?

As much as we’re seeing minority and underrepresented voices in cinema, praise be to the growing accessibility of cameras and film education, at a certain point, they’re bottlenecked by distribution opportunities. Major festivals now, too, have the pressure to sell tickets and cater towards their audience. This is when festivals like Sante Fe prove crucial. The programming took both risks on new filmmakers with new (if not historical) stories, and still managed to get butts in seats. On top of that, Q&As were rarely painful, as they often are. There’s nothing worse than standing up there as a creator, mic in hand, with no one who wants to know anything about the three years you put into an hour and a half movie. But the Georgia O’Keeffe short, at only 26 minutes, was surpassed by its Q&A, which lasted closer to 40 minutes — and that was even cut short. It helps that much of the community were, and still are, artists. In Santa Fe, with a history so willing to be re-visited and a sky so blue, big, there must be room for us all.