10 Tips on Scoring Great Locations when Producing a Microbudget Movie 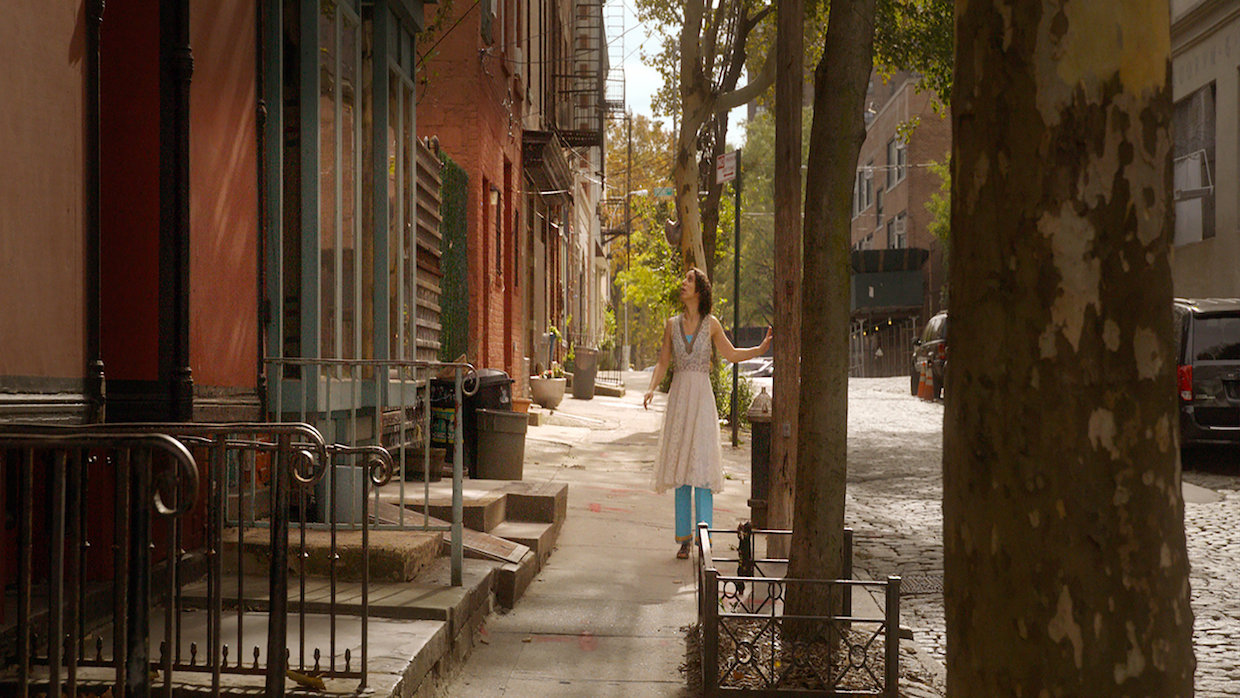 Winner of the Best American Indie at the Ft. Lauderdale Film Festival, Tomorrow Ever After, a time-travel tale directed by and starring Ela Thier, is available on iTunes and Amazon beginning Friday, December 22. Thier plays Shaina, “a historian who lives 600 years in the future, and is accidentally sent back in time to current-day America. War, poverty, pollution, greed, exploitation, depression, loneliness: these are things that she’s read about in history books. And while she studied this dark period of history (in which we are currently living) when money is viewed as more important than people, she has never, in the flesh, seen humans hurting other humans—until now.” In addition to her work as a director and actress, Thier also teaches low-budget filmmaking, and below she has guest blogged for Filmmaker a piece on how to find great locations for microbudget films.

Locations determine what your film looks like more than your camera or gear. But on microbudget independent films, they’re often the toughest, most laborious and time-consuming part of pre-production.

The video below, about locations and production design, is one in a six-part series on making big movies out of small budgets. (Sign up for the full series here.) Below is my list of 10 tips on scoring great locations with a shoestring budget:

This first part is obvious but so important that I must mention it: start with the people you know. Closest friends, family, cast and crew — these are your best bet to finding locations. If you’re crowdfunding, your backers are likely to be a source of support in finding locations.

Every time I produce a film, there are always several emails that go out to my backers, with a list of what we need, including and especially locations.

Showing up to a potential location with someone else gives you cred, even if this other person just stands there and says nothing. This will make the location owner feel like they’re getting involved with a community of people, and you will look like you’re having fun (because you will be having fun if you’re not working solo). Having someone with you will also boost your gumption level when you ask for favors or negotiate.

You have to forge a relationship when you show up at location you may want for your film. On a microbudget film, sending someone in your place is like sending someone to go on a date for you. I’ve seen colleagues lose locations they could have had because they sent a PA to meet the location owner. If that PA carried a check for $5,000, that would have worked. (Good producers, on the other hand, are professional friend-makers.)

Make friends with the location owner. If you know them well, use this opportunity to deepen your relationship even further. Create the relationship by listening to them. My equation is: at least 90% listening, 10% talking. When you talk, make the conversation about them.

Importantly: compliment their location genuinely. If the place is a dump, view it with love: does it have personality? Is the old wood pretty? Do you adore the plate collection?

I remember someone walking into my super messy room and as I apologized for it while overcome with embarrassment he said, “I like being in here. This place looks like you.” I never forgot that comment. That’s how you score a location.

Once the relationship is forged and the answer is “yes,” only then you hand the location over to your location manager to sort out logistics. (And make sure they meet in person.) Stay available as needed and keep it personal. Treat owners of key locations like you treat key cast members.

4. PRESENTING THE SCOPE OF THE FILM

If you present the film as a big, mega project that will premiere at Sundance and then air on HBO, the location owner will see dollar signs — lots of them. If you present yourself as a student film, paid for with money you saved waiting tables, the sacrifice and risk won’t seem worth it to a location owner.

The trick is to strike that delicate balance: this is a super exciting project that lots of people will see (because… what communities are you plugged into….?) But it’s a love-project that’s coming together through many small contributions and favors. You’re essentially inviting the location owner to join your backers in grassroots community project that almost everyone is volunteering themselves for.

Needless to say, never state the budget of the film. If asked, explain that your executive producer (real or imagined) requires that the budget remain confidential.

Once the connection is warm, the plate collection has been complimented sufficiently and you shared a laugh, it’s time to talk shop. Begin every conversation with the assumption that they’ll be offering you a favor. You’re asking for a donation in the form of a location.

Offer a special thanks credit, which you will honor on IMDb and not just in the end credits. If this is a major location, consider offering an associate producer credit. You could even offer a co-producer credit if most of the shoot will be there and they want to PA while you’re filming.

If film credits, favors and barters don’t fly, offer money. Begin by offering fifty-percent of what you can pull off. If you can pay $400, offer $200. Then go up from there. When you end up at $400, they’ll feel like they scored while you’ll have stayed on budget.

Always express appreciation for receiving so much for so little and apologize for how small your budget is. (Remember: a professional friend-maker is someone who freely and frequently expresses appreciations.) All of the above can and should be genuine.

My policy is to leave a location in as good a shape or better than how I found it, and I let owners (and crew!) know that in advance. I shot three different films in one person’s home because he had such a positive experience. I even shot a major food fight at a supermarket and am now besties with the manager. Any time I need a supermarket scene, I have somewhere to go.

I’ve not always pulled this off. I once spent a week filming in someone’s home while the family was on vacation and we forgot to turn the fridge back on. The family arrived with three young children and found all their food spoiled. Needless to say, they’ll never let me or anyone else shoot there again. In hindsight, what I should have done is reimburse them for the spoiled food and pay someone to go grocery shopping for them that day. I should have done that with my own money, even if it meant that I wouldn’t eat myself.

Whether you pull it off, the intention should always be to take full responsibility for a location rather than exploit it and run. That’s a matter of integrity, and it makes it possible for you and other filmmakers to keep doing what we’re doing.

Be sure you know which two or three people will be at the location after it’s wrapped to clean it up. Remember that people get excited about being on a shoot and a lot less excited about cleaning up when the shoot is over. So prepare personnel in advance for “wrap day.”

7. NO MAJOR ALTERATIONS AND NO SURPRISES

Plan no major alterations to a location unless the owner is psyched for it or you have the money to retrace your steps. That means no painting walls, drilling holes, etc.

If you’re going to deface anything, let the owner know in advance and show them exactly what you’ll be doing and how you’ll restore it. Don’t surprise them the day of the shoot by walking over their carpets with buckets of fake blood.

I once had to turn the outside of an impeccably kept white house with a perfect green lawn into a dumpy home. We discovered that wiping mud on the face of the house had good effect: it made the house look old and neglected, not muddy.

I brought the homeowner out and demonstrated what we’d be doing by covering just a tiny area by the side of the house with mud. I then showed her how, with a garden hose, the mud came off instantly, and the house looked even whiter and cleaner than it did before.

She got so excited that she brought us rusty junk from her attic to put on her yard and make her place look dumpier. We threw dry grass on top of her green lawn, hung some laundry lines, and boom: the set was amazing. The homeowner partnered with us in achieving that look.

When we hosed the mud off after the shoot, the house was even cleaner than before.

8. WHAT TO CONSIDER IN CHOOSING A LOCATION

If a location looks the part, the three logistical considerations that you don’t want to overlook are sound, access and a holding area. It’s okay to have creaky floors — they might even add character to the scene — but if a loud train goes by every two minutes, you won’t be able to film there. Secondly, you want your cast & crew there on time without spending a fortune. And lastly, is there a viable holding area within a five-minute walk, where cast & crew can hang out, eat and get changed, when they’re not on set? Sometimes the holding area is way more expensive than the location itself, so look into it before making a commitment.

Lastly: avoid apartments where there’s a roommate who’s not been looped in (‘cause “he’s never home anyway,” or something like that). There needs to be complete agreement by all parties involved.

If you’re working with a tiny budget, you probably can’t afford a location manager.. It’s the hardest job and the least glamorous. That’s why on shoestring-budgets, this job is almost always a second hat given to someone who’s also doing something they’re excited to do.

Figure out among your crew who is the most diplomatic people-person. That’s also the person you bring with you on your scouts and surprise them with the “location manager” title. Beg if you need to.

Your “location manager” can be your production designer, your producing partner, your production manager, your 2nd AD, your make-up artist. I’ve seen it all. Only person it can’t be is the director or a cast member, because the film will suffer. It’s a necessary role, and when there’s no money, a hapless crew member who’s been cursed with the skill of being friendly will have to get stuck with it.

10. GIVE YOUSELF LOTS OF TIME

Finding locations is the hardest and most labor-intensive part of microbudget filmmaking. When you don’t have money, your best friend is time. Start looking for locations as early as possible. How early? I often tell filmmakers to come up with a story idea and write a script with a location in mind that they already know and have access to. It’s never too early to start looking for locations.

My free online mini-course on making big movies with small budgets can be found here.