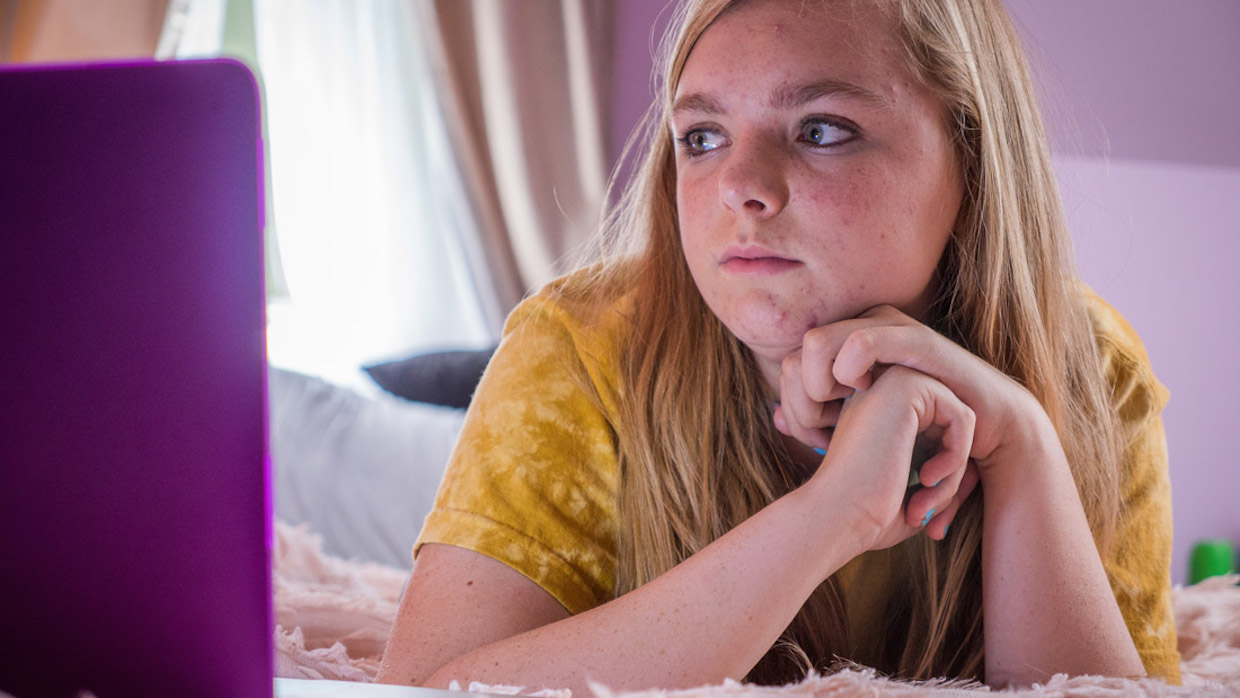 I suppose I should lead with Bo Burnham’s Eighth Grade, one of the fest’s breakouts or something along those lines — it arrived as an A24 production with Scott Rudin as one of the producers, so clearly people were going to be curious. The title is basically the movie: in her last week of middle school hell, awkward Kayla (Elsie Fisher) — voted by her otherwise indifferent classmates as most quiet — fumbles through a cool kids’ pool party she shouldn’t be at. Kayla shadows a high school senior and is invited to hang out with her crew. That temporary boost of  confidence leads to a fourth act Very Bad Thing and emotional crisis, gets a pep talk from her dad and ends in a relatively sanguine place.

First-time director Burnham displays a preference for traveling masters rather than coverage and cutting, avoiding conspicuously flashy shots but generally choosing the right place for the camera to go. The eighth graders here actually look like awkward adolescents rather than happy accidents of genetic fortune amplified by workout routines and Hollywood makeup, and their interactions feel credible. Relentlessly of the moment (get ready for jokes about dabbing and lots of Instagram scrolling), it made me feel ancient while cleverly acknowledging the potential age gap felt by viewers in a scene where a group of 12th-graders insist the generation gap between them and a girl four years younger is too big to be bridged (she got Snapchat in 5th grade, after all).

It’s certainly not Burnham’s fault that what’s actually a fairly accomplished film is already ridiculously overhyped, but here are my two significant problems. One is the rather standard coming-of-age arc: I don’t necessarily mind the YouTube monologues Kayla makes in an awkward stab at attaining popularity through vlogging, choked with so many “likes” and “ups” that making a legal transcript of them would be particularly torturous. I do, however, mind the way each one articulates sets up the theme and arc of each act (“The topic of today’s video is being yourself”). The other thing that’s killing me is the way the film resolves: with a heartfelt monologue from Kayla’s dad (Josh Hamilton) that’s warm, understanding and reassuring. The premise of the film is that growing into your own skin and becoming who you are as an adult will solve all your internal emotional problems, which in my lived experience is simply not true. I know a ton of accomplished and talented people who are good in their fields and still riddled with all kinds of self-doubts and anxieties: maturity is not a panacea for all that ails. This is the kind of reassuring warm hug that’s actually a lie as pernicious as one in any romcom.

Sandi Tan’s debut feature Shirkers is the 26-years-later compromise-of-necessity incarnation of a film that almost was. Shot in 1992, when Tan was in college, from a proudly illogical script of her own devising, Shirkers was meant to be a rare, hopefully transformative Singaporean independent film in a country without much history of those. Directed by Tan’s ambivalently-motivated mentor Georges Cardona — who subsequently absconded with 70 reels of unedited material– Shirkers is partially reconstructed alongside a personal memoir and decades-later investigation. No spoiler here: seeing vibrant footage with celluloid-specific colors from the get-go, it’s clear that Shirkers was relocated and exists in one form or another. The question is how and why it got away in the first place; not all answers will be provided.

To reconstruct her upbringing and the film’s history, Tan draws upon a shockingly well-maintained personal archive of physical objects so deep as to be almost post-iPhone in its comprehensiveness — home video, endless correspondence with friends, aforementioned Shirkers footage, clapboard scene-starts included. Tan’s youth is both locally specific and broadly familiar to anyone with any kind of countercultural teen roots: making zines with friends, constructing alternative pantheons of music (album covers from old photos bracket the Velvet Underground and Suzanne Vega within the same continuum), and — for Tan, an ’80s kid — an appropriately Sundance-friendly film diet heavy on Jarmusch et al. (“We gotta be the Coen sisters, I swear,” reads one of her old letters.) There was a locally specific desire to express herself in a society so infamously disciplined as to outlaw chewing gum, and a more broadly familiar wish to make her own art without much encouragement from the boy’s club that acted as her initial point of cultural entry.

Georges Cardona — an imprecisely-accented film school teacher, who claimed, with no immediately ascertainable plausibility, to be from New Orleans — was an exception. Undefinable accent, questionable Louisiana origins: he was just like Tommy Wiseau, perhaps, but the footage that survives from the shoot — starring herself, directed by Cardona — has gorgeous colors and textures, is lively in its archival capturing of period fashions and flecked with moments of true personality from mostly inexperienced non-actors. It’s not hard to imagine the finished film taking a place somewhere in the area where No Wave underground classics or early VHS slashers get appreciated: its weaknesses and charms are inextricable. Where the story goes from there is best left unspoiled, though the effect is inevitably a little melancholy. There’s a brief montage cutting from now-gone buildings as captured in Shirkers to their present incarnations: the effect of seeing one charming old structure replaced with placards touting (in the type of language way too familiar to anyone on a Sundance listserv) innovations for thoughtful creators or some such is depressing. The final Shirkers is a little busy: in the current fashion, there’s a great deal of graphics applied to bring densely-written letters to animated life (I would rather have just read the text), a score that sometimes sounds like a determined attempt to reimagine “O Superman” via Bobby McFerrin, Tan’s voiceover narration a little on the NPR overenuncation side for emphasis. But these are quibbles: the old footage is transporting, the story contextualizing it of considerable interest.

Nicolas Pesce’s first feature, The Eyes of My Mother, was an immaculate-looking black-and-white horror exercise in which all the scares came from precise framing and unexpected cutting rather than the sudden dropping of a loud noise. There were too many crucifixes on the wall and general injections of religious symbolism that seemed an attempt to class up what was basically a trashy horror movie — I kind of wished the movie had just accepted itself for what it was. Be careful what you wish for, I guess: follow-up Piercing is a fun, frivolous and (even at 81 minutes!) slightly overattenuated exercise that definitely does not waste time trying to justify itself.

The plot is simple: a man (Christopher Abbott) wants to stab a sex worker (Mia Wasikowska) to death with an ice pick, but she turns the tables. Pesce’s adaptation of Ryu Murakami’s source novel follows the arc and major events closely but omits all interior psychology and context. Murakami’s (excellent) book is, at its core, a story about a man abused as a child who thinks that performing this one act will make it all go away; shades of Claire’s Knee, but for failed attempts at displacing trauma. It’s deeply sad, but Pesce purposefully strips away all that information. What’s left is a psychology-free black comedy (with some prosthetics gore, less than you’d perhaps expect given the title) in which two very strange people perform a number of actions that veer from the understandably pathological to the totally inexplicable.

From the moment Pesce drops the first lush Bruno Nicolai track (of many) to ironically backdrop interior monologues of murderous fantasy, it’s clear what the tone will be. All the exterior sets (at least nearly all) appear to be totally constructed miniatures, while every apartment is also an elaborate set. (Typical example: a hotel room in which all the liquor bottles have been custom-designed with no logos but different typefaces for “vodka,” “tequila,” etc., and with a bookshelf inexplicably full of National Geographic issues for color.) The effect is somewhere between Wes Anderson dollhouse dioramas with less detail and the ominous art-installation-rooms of David Lynch. There’s plenty to look at and listen to, so I didn’t mind that it was all pretty academic. Sundance is not drowning in movies that are form-for-form’s-sake, but I was amused from the opening production company logos — following some kind of old home video “feature presentation” graphic, with the logos distressed by faux-VHS grain to liven things up a bit. I also wouldn’t blame anyone who hated it (the P&I screening had a lot of walkouts), but two films in Pesce has an interesting eye that, for me, compensates for his slightly inexplicable proclivities.