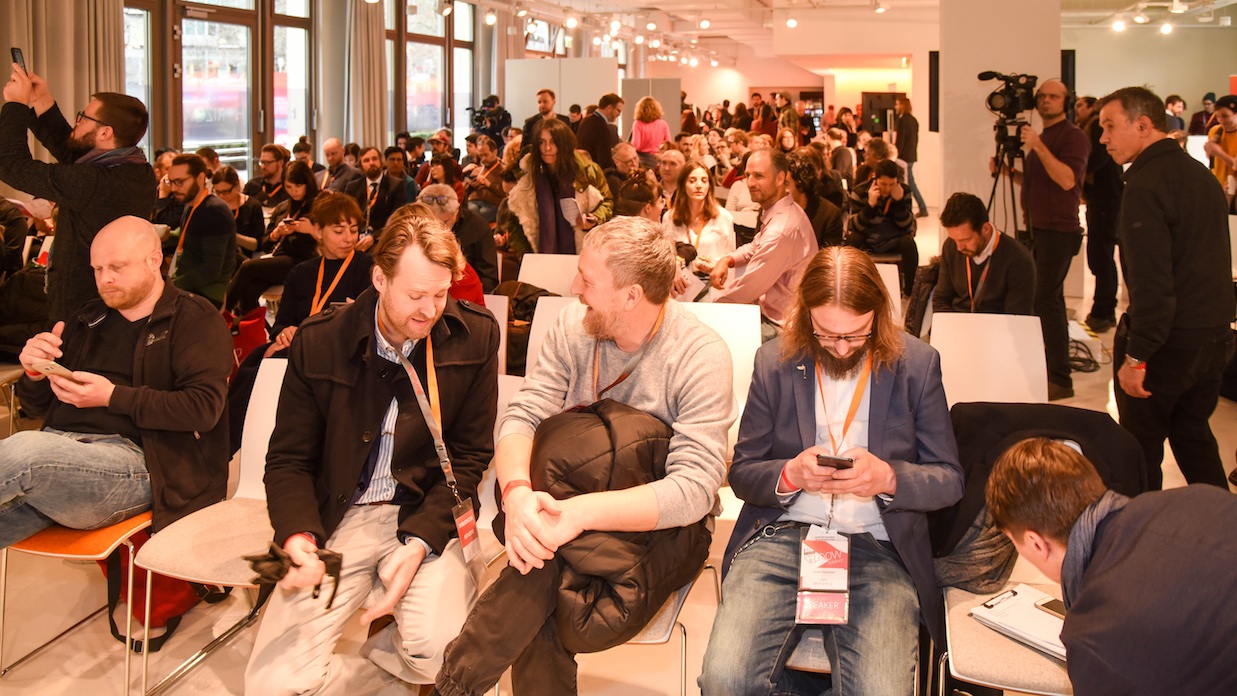 Artificial intelligence (AI), the blockchain and mixed reality were at the center of the recently completed Berlin Film Festival’s newly expanded Horizons section. Taking place within the European Film Market (EFM), the 2018 program’s focus on buzzy technological innovations bucked the predictions of some skeptics by drawing sold-out crowds and with several tech companies choosing the festival to launch their platforms.

The continued expansion of virtual reality (VR) was also in discussion, with a wide range of projects, including the virtual behind-the-scenes of Wes Anderson’s opener Isle of Dogs, available for viewing in the festival’s inaugural VR cinema.

EFM Director Matthijs Wouter Knol explained at the event that the industry is in a digital transformation. Blockchain technology and artificial intelligence, he said, will affect the way the film industry does business, and the way it will choose films to fund, buy or sell in the future. “They [AI and blockchains] offer the possibility to rethink how systems are working and for us to find out if and how the involved changes are adaptable to the film industry,” he said.

Bewildered yet curious filmmakers attended the blockchain workshop, where a range of startups and executives explained the fundamentals behind the decentralized system that uses cryptography to create and keep secure exchanges and crypto-currency to process financial transactions.

“We should not confuse this with bitcoin,” insisted Digital Media and Blockchain consultant Manuel Badel, who separated the utility of blockchain technology from the current spate of ICOs (initial coin offerings), which can appear to be nothing more than digital currency “pump and dump” schemes. He instead said the blockchain would ultimately find uses outside of pure currency exchange and offer alternative ways for both film industry individuals and companies to conduct business. Badel provided examples where the service could benefit media organizations, including intellectual property (IP) protection, digital rights management for tracking royalties, automated contracts with stakeholders, residual payment systems for production members and distribution companies, crowdfunding support, open sourced creative collaboration like scriptwriting and decentralized content distribution.

Announced during the EFM was Swedish start-up Cinezen Blockchained Entertainment AB, that deems itself the first decentralized and community-driven blockchain video-on-demand (BVOD) distribution model. Sales agents including Denmark’s Level K and the UK’s Celsius Entertainment have come on board, signing worldwide BVOD agreements that are similar to licensing for transactional video-on-demand (TVOD), except that consumers pay for the content with Ethereum, the world’s second largest crypto-currency after Bitcoin. The system does not require invoicing and royalty reporting as every content provider is part of a blockchain network that has direct access to ”incorruptible and transparent transaction data”.

Since the project started in August 2017, Cinezen’s CEO and co-founder Sam Klebanov has met with over 250 rights holders, both sales agents and local distributors, with, he says, an overwhelmingly positive response. The company vets an official launch later this year, while an alpha version will be made available for public testing before Cannes.

Further demonstrating how quickly blockchain technology is finding practical purposes within the film business, Glenn O’Farrell, a lawyer and CEO of Toronto-based public media organization TFO, said at the event that use of the blockchain is already enabling TFO to reduce costs and billing complexities by removing intermediaries and allowing the organization to deal directly with financial partners.

Several businesses within EFM’s Startup section, where technology businesses are coupled with film professionals, also included blockchain within their business models. Based out of London and New York, Big Couch co-founders Irina Albita and Maria Tanjala have coined the term “crewfunding” as part of their business strategy, which utilizes blockchain to help independent film producers fund their films. Toronto-based research and development studio Three Lefts meanwhile has developed a “smart contract” program using blockchain solutions. And Harold Dumur, founder of Montreal-based OVA, is integrating blockchain to his open sourced platform that allows non-professionals to develop their own VR/AR environments.

Additional speakers included Berlin/Brandenburg-based Chris Hobcroft whose open-sourced video-sharing company LivePeer is using blockchain to create a live streaming platform in which all participants have the ability to shape the business, rather than one single company or individual. Hobcroft is also using currency tokens as a means to further drive the business financially.

“It’s the way forward,” insisted Matthew Rappard, CTO and co-founder of Three Lefts. “Think about a production where you can easily hire non-union actors and crew members, where you can more efficiently work with third-party rights holders and where you can easily follow the trail of money for residuals. Then in one click, everyone can quickly be paid.”

Rappard also mentioned Disney has its own blockchain titled Dragonchain that allows the multi-faceted conglomerate to better interact with its studios, subcontractors and third party organizations.

The complexities of artificial intelligence were broken down in another panel, with “machine learning” as the on-topic buzz word. The group of panelists included Robert Richter, Google’s EMEA Partnerships Solution Exec, who explained that the function of machine learning is to give computers the ability to learn pattern recognition. Richter gave examples such as contextual ad targeting, that matches keyword-targeted ads to sites within the Google Display Network to assist advertisers focused on performance and cost-efficient conversions. He also referred to the company’s translation API that VICE is currently using to expand its global reach, as well as Google’s video intelligence API that allows users to search every moment of their video file within their catalogue.

“Imagine you have a large archive, or you have a lot of content from a film production, and you want to search for a specific moment. The pre-trained API can find it in seconds,” said Richter.

Specifically on the film side, Scriptbook was on hand to explain their script analysis platform that utilizes a stacking of algorithms to determine a script’s “DNA.” Using Suburbicon as an example, the company’s co-founder Nadira Azermai explained they correctly predicted its financial forecast through an analysis of the script’s projected cast and crew, its characters’ sentiments and a comparison to other like-minded films.

“Our machine learning algorithms are capable of automatically reading and analyzing a script, and from there generating an assessment of a film’s commercial value prior to financing, producing and distributing,” said Azermai.

Dr Marion Jenke of German film and television production company UFA GmbH was quick to put her hand up, insisting the likes of predictive analysis can be limiting. She used an example of an ad they placed on the television program Deutschland 83 whose audience trajectory was different than what the algorithms suggested was appropriately targeted for the popular German spy series.

“We wanted to be creative, we wanted to target different types of audiences, and it worked,” said Jenke, who was also dismissive of the secretive algorithms that the likes of Amazon and Netflix rely on.

Other topics of discussion were 20th Century Fox’s trailer for the 2016 film Morgan in which the marketers hired IBM supercomputer “Watson” to select the most appropriately dramatic scenes for a human editor to include. Richter said this process didn’t replace the human editor but instead sped up the process, allowing the editor to focus on more creative tasks. While this type of AI is still in the early stages, Richter said it’s likely the industry will see more of this type of footage evaluation in the near future. “We’re seeing how AI can make more interactive viewing experiences for less of the costs, while helping creators personalize content,” he explained.

While VR and AR may seem like they have taken a quieter turn, industry executives at the VR NOW Summit Day insisted the medium is still in full swing.

Following on from Sundance where CityLights acquired the three-part VR series SPHERES for a low-to-mid seven figures and where Dogwoof purchased the 15-minute interactive VR experience Zikr: A Sufi Revival, which also includes location-based installations and an interactive online version, chief content officer and co-founder of Littlstar Matthew Collado said his premium VR network would now start charging for content.

The move is integral for VR creators like Montreal-based Felix & Paul, whose work — Wild and Isle Of Dogs Behind The Scenes co-created with FoxNext (formerly Fox Innovation Lab); the Emmy-winning The People’s House (centering around eight years of the Obamas at The White House) and the eye-popping Cirque du Soleil piece, Dreams of ‘O — is helping to drive the medium forward.

“We are constantly working out how to streamline our budgets since financing is still not there yet,” said Felix & Paul co-founder Stephane Rituit. “We need to demonstrate there is a market, so for networks like Littlstar to start charging is important. This helps us better convince investors.”

Both Rituit and Collado were also excited about the continued innovation on the technology side, with handset creators such as Oculus, Google and HTC Vive working on less expensive standalone headsets that won’t require a device.

“These are ways we can entice people to try VR,” explained Collado. “But we need to keep focusing on content. Right now, we rely heavily on established IPs and marketing budgets.”

Rituit said Felix & Paul Studios are working hard to change this, with upcoming projects such as Vikings Valhalla, where MGM is giving them “carte blanche to explore VR, and not marketing.”

Antoine Cayrol of France-based Atlas V, who helped co-produce SPHERES, also said extending content across both linear and non-linear platforms, such as VR apps, YouTube channels, location-based VR and three-screen devices, is key to attracting audiences to the work.

“It’s just like releasing a film — we have to think in terms of getting am A-list cast and film-makers attached, followed by minimum guarantees, co-production financing and support from government funds, as more countries are realizing there is a market for VR,” added Cayrol.

MK2’s Senior Sales Executive Victoire Thevenin said the company’s foray into location-based VR continues to expand, as does their acquisition of VR series which they can distribute as individual segments or together as a series.

The session concluded with a look at the continued growth of MR, with all panelists eager to see this year’s roll-out of Magic Leap One’s mixed-reality headset with Digital Lightfield technology and the Microsoft MR capture studios that are opening in San Francisco and London. Apple is now also touting their ARKit with the iPhone X that combines device motion tracking, camera scene capture and advanced scene processing.

“The market is going to change very quickly once mixed reality makes its way into the consumer market. But first, we need more content,” said Cayrol.

EFM Director Wouter Knol added, “EFM’s new VR cinema allowed producers of VR content to book market screening slots, similar as they would for theatrical films. It is evident there is a growing demand to experience and buy VR content.”