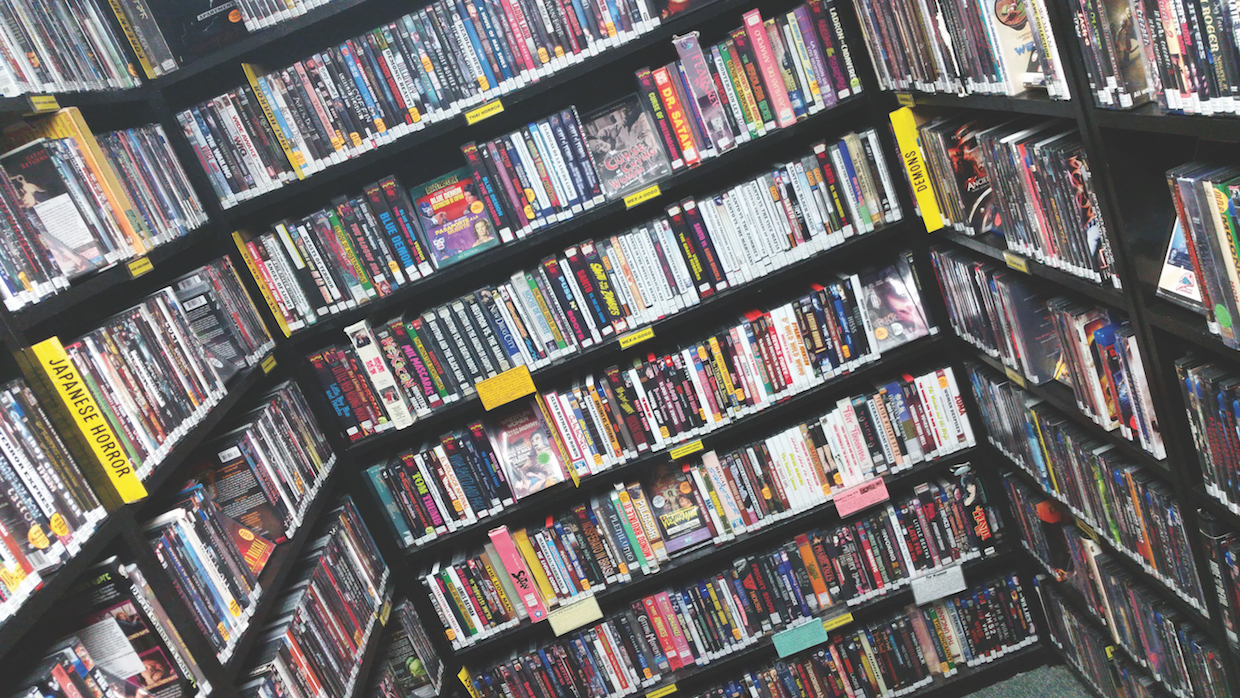 Skimming through Amazon Prime the other day, I noticed the recent addition of extreme oddity The Face with Two Left Feet, a 1979 Italian Saturday Night Fever cash-in about a loser who also happens to be a dead ringer for John Travolta, a fact he exploits to pick up his dream girl. I bring this up not merely to recommend the film (although I wholeheartedly do) but to point out that this is decidedly not what one might expect to find on a mainstream streaming service. Not too long ago, this sort of thing would be — if you were extremely lucky — the exclusive domain of your local video store, probably on a decrepit, badly dubbed VHS tape. For the most part, trash cinema freaks like myself used to have to go dumpster diving (sometimes literally) — scouring eBay, flea markets, Goodwills and soon-to-be-shuttering rental shops — to dig up a gem like this. But here it is, still dubbed but in OAR with a pretty clean transfer, free with my Prime subscription.

In their earliest heyday and with a desperate need to stock shelves, video stores were once flooded with shot-on-VHS garbage and straight-to-video erotic thrillers. The modern streaming service is similarly seriously thirsty for content. Boutique physical media labels like Code Red gladly subsidize physical media releases of piles and piles of exploitation and genre rarities by selling packages of streaming rights. Others, like Vinegar Syndrome, are opening up their own outlets, like exploitation.tv. As someone who survives on a cinematic diet of deep cuts, this is only good news, even as it marks a new stage in the perceived obsolescence of the video store.

I’ve worked in video stores nearly half my life and have spent most of those years at Seattle’s Scarecrow Video — as far as anyone can tell, the largest publicly available video rental archive on earth. We have a little more than 130,000 individual titles, way more than the big three streamers combined. That gap is mostly made up of foreign titles (our foreign section easily runs five figures, frequently available only on region-coded import discs), documentaries and exploitation and genre-detritus shelf-stuffers from the boom days of early home video. Since I’ve worked here, I’ve had almost zero difficulty getting access to the ultra-rare, nor have I missed an opportunity to pontificate on the inadequacies of streaming. Yet I’m forced to admit that it’s getting easier to see — and more important, share — the stuff I care about.

There will still be tremendous holes. Low-budget genre and exploitation were especially vulnerable to disappearance when new formats emerged. One of the reasons Scarecrow still carries roughly 15,000 VHS tapes is that almost none of the films they contain are available in any other format. They never made the jump to DVD in the first place, making it even more unlikely that many of them will be released on Blu-ray. It takes a lot for a boutique label to release these movies at all — to do the real work of obtaining decent source materials, cleaning them up, properly scanning them, and so on — and the profit margins are still pretty slim. That’s setting aside the issue of securing rights to 40-, 50-, 60+ year-old obscurities, which can be so knotty that many, many films simply vanish because nobody has the time or resources to track down who’s supposed to get paid for what. So, thousands of movies are still going to fall through the cracks. That’s where we would traditionally think a place like Scarecrow can step in: We’re still a clearinghouse of sorts for this stuff. It’s all here, in one place, accessible to anyone who walks through the door, and we’ll have it for as long as it lasts. In a sense, we’re an archive.

So, if it’s so rare and we’re so committed to sharing it, why don’t we just digitize the whole shebang and slap it up online for a nominal fee? First, it’s illegal, but for the sake of argument we’ll pretend that’s not an issue. So, we have Scarecrow’s 15,000 VHS titles. Let’s be conservative and say they run about 80 minutes apiece. Making a copy isn’t a matter of a few minutes, like with a DVD: You have to sit through all 80 of those minutes, then you have to watch the copy to see if it looks and sounds OK. So, again being pretty conservative, let’s say it takes three hours to make a copy of one tape. That’s three hours x 15,000 tapes: 45,000 hours, or a little over five years. You could cut that down if you had more than one person running multiple tapes at a time, but who’s going to pay for all that work? The video store preservationist mission is, intrinsically, extremely limited.

And yet, it turns out that a bunch of people have been quietly, semi-clandestinely been doing this great work for ages, copyright law be damned: pirates. Not guys who steal Oscar screeners so you can watch a grimy .mp4 of The Post with the parents on Christmas Day; no, these are dedicated cinephiles with the time and inclination to not only track down some super-rare Mexican horror western from 1959 but digitize it, in some cases make custom subtitles for it from scratch and upload it to a private bit-torrent tracker for likeminded weirdos. These little internet clubs (which would prefer I not name them publicly, but I’m guessing most people reading this have a pretty good idea which ones I’m talking about) have some fairly exacting standards for sourcing and quality control, specifying not just what sorts of work is allowed to be uploaded at all, but what sort of sources are acceptable, video bit-rate (ideally between 1,200 and 1,800 kbps for a standard-def rip), file-size limits, maximum resolutions (720 pixels in SD), which video and audio codecs are approved, frame-rates (everything needs to be 23.976), rules about cropping and even what sort of video container the file is in (no .mp4s, only .avi or .mkv), all so that anyone who downloads Rider of the Skulls will be able to play it on their laptop or on their Blu-ray player off a USB stick with as little difficulty as possible.

Personally, I can’t tell you how many times I’ve turned to some of these places to find a title that not even Scarecrow’s vast collection contains. It’s easy to imagine hours of effort being poured into a single upload, meaning that effectively these trackers are doing the job of boutique labels, archivists, preservationists and even the video store clerks proselytizing to you about the latest crazy movie they watched. And they’re distributing the fruits of that labor with anyone who joins up and is willing to share… all for free. These torrent trackers may not be the best model available: If nobody’s getting paid then nobody’s getting paid. So, that’s just one major issue. But as a crowd-sourced and -funded endeavor they’ve remained remarkably sustainable and continue to grow. One of these days, it or something very much like it might be the only real video store left.