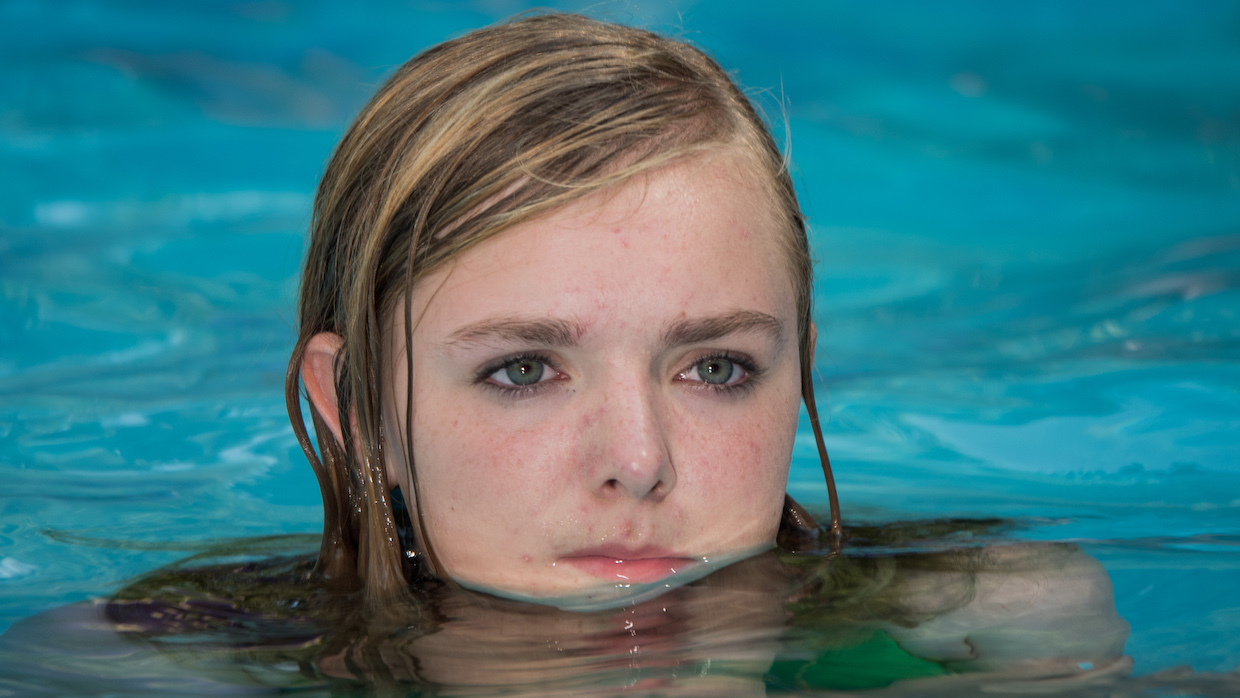 With Bo Burnham’s Eighth Grade now in theaters, we’re reposting this interview with the writer/director conducted during SXSW 2018.

The Plot: Shy and uncertain (except when doling out life advice on her sparsely followed vlog), eighth grader Kayla (a revelatory Elsie Fisher) struggles through her last days of middle school.

The Interviewee: Bo Burnham. Eighth Grade is the feature directorial debut for the multi-hyphenate writer/director/musician/stand-up comedian.

Filmmaker: Let’s start by talking about opening shots. The way you open the Jerrod Carmichael stand-up special you directed for HBO — this extremely tight close-up with Carmichael already on-stage and mid-statement—- is truly one of the great opening moments of a performance film. In Eighth Grade you have another memorable opening shot — a long, unbroken take of Kayla making one of her vlogs accompanied by a slow, revealing pullout.

Burnham: That’s real footage from her MacBook Pro with a digital pullback. We didn’t want to shoot it with our Red and then down-res it. At first our producers were like, “Is everyone just going to think our movie looks really shitty?” But we didn’t want to try to make the movie look like we shot on celluloid. We wanted to lean into the fact that this is a digital film, because this is a digital story. So that first shot is a digital zoom; it gets super-compressed and blocky in a very specific way.

Filmmaker: You talked in the post-screening Q&A about how those vlogs were actually pretty tightly scripted. They’re impressively naturalistic. The rhythm of Elsie Fisher’s delivery, the way she sprinkles in these awkward pauses and all these “likes,” feels almost like adolescent David Mamet.

Burnham: There was always a little flexibility in the dialogue, but the rhythm and the texture of what we were trying to get was on the page. It’s way less improvised than Elsie makes it appear. It was a lot to ask of Elsie to do that all in one take, but we thought, “If worst comes to worst, we can be cutting to black and put opening credits over that.”

Filmmaker: You’ve talked how your first inkling of this idea was to make this giant ensemble piece. How did Eight Grade become simplified into this story about Kayla?

Burnham: My first thought was, “A story about the internet – I better do some big, sprawling thing.” I started writing a bunch of things and stumbled on Kayla’s voice. I felt like I could say everything I wanted to say through that character, and it became more of a character study than some wild, multi-layered thing with all these bells and whistles. Especially for me out of the gate as a filmmaker, I felt like what I should do is make a film that leaned into my strengths. And I thought if I had any strengths, they were in simple scene work and clean storytelling. If I had tried to make something huge and crazy and wild I probably would’ve fallen flat on my face.

Filmmaker: What research did you do to figure out what it’s like to be in the eighth grade now?

Burnham: The really incredible thing is that if you want to find out what [contemporary eight graders] are like, they post their entire lives online. (laughs) I don’t have to go to a middle school and creep around. The internet has made research much, much easier — so easy that maybe we don’t always do the work that we should. But their entire world is there online and if you go find the kids that no one is looking at, they are being very honest and open and vulnerable. If you research eighth grade by who are the most famous eighth grade YouTubers you’re not going to find anything honest. I would just search “eighth grade vlog” and filter it by upload date, so it would be something posted 30 minutes ago by a kid who has ten subscribers.

Filmmaker: Once you decided that Kayla was going to be your lead character, do you remember the first scene you wrote?

Burnham: The way it kicked off was actually watching videos of girls that age speaking and just trying to transcribe it. I did that before I even had the character of Kayla in mind. I was just trying to see if I could capture what those videos sounded like, which was this very specific rhythm. It was like Mamet, that’s a perfect comparison. So I transcribed them and then I tried to write an original one. That was when the voice first came.

Filmmaker: Did you start writing with one of the vlog posts?

Burnham: Yeah, I think I started with “Being Yourself,” which is the one from the opening of the movie. It is a 13-year-old lecturing everybody on how to be yourself when you’re a different person every day when you’re that age. (laughs) So it started from the vlogs and worked its way outward to really refine her voice. I think peoples’ secret wants are much more vulnerable than people’s secret fears about themselves. When you catch people trying to be something they’re not, that’s actually the most truthful thing.

Filmmaker: The role technology plays in these kids’ lives is a big part of the film. I’ve been making this conscious effort the last few weeks to wean myself off my phone a little bit, because I was finding myself unable to stand in the deli line at the grocery store without taking out my phone. I’ve started leaving it in my glove box when I go places. Did you have some epiphany where you realized your dependency?

Burnham: Taking my phone to the bathroom. When I started peeing sitting down so I could be on my phone, I was like, “This is a problem.”

Filmmaker: I’m not that familiar with your work as a performer, but I love the stand-up specials you’ve directed — the Carmichael one and Chris Rock’s latest Netflix special. The lighting in the Rock special is fantastic. Even stand-up specials that are incredibly funny are usually visually nondescript. I love how you’ve played with that format. Who are some of your favorite directors?

Burnham: In the space of performance films, Jonathan Demme is the greatest director of all time. For this movie, I would say Andrea Arnold’s work, Trey Edward Shults’s Krisha was a big influence, and then The Wrestler, especially at first when I was thinking about doing the movie in more of a docu-style instead of the stylized thing it became.

Filmmaker: There’s some great zooms in the movie. You don’t see them all that often any more.

Burnham: That’s what we felt. It just seems like zooms are totally underutilized. There was a vague visual idea in the movie of playing against the flatness of screens. We tried to use a lot of wide lenses so you feel the depth of the real spaces as opposed to the flatness of the screens. There were very few long lenses in the movie, so using zooms was a nice way to link those two ideas of the compressed flatness of the screen you get with a long lens and the feeling of depth you get with a wider lens.

Filmmaker: When Kayla does her goodbye post on her vlog, which is one of the low moments emotionally for her in the film, you shoot it with a static, tight oner. Tell me about that decision.

Burnham: It’s a little bit linked to the opening scene and how we wanted to play with the idea of how we register differences in resolution. That shot starts with a frame similar to the first frame of the movie, but instead of the 720p of the MacBook camera you’re now looking at something from a Red camera shown at 4K or whatever it’s being projected at. When you change the resolution, it means something totally different. Now you see the shininess of Kayla’s skin. You see micro expressions on her face that you can’t see when the image is compressed.

Also, there’s nothing more powerful than an actor’s face. The answer to why I framed that scene like that is because by that point I was like, “[Elsie] is incredible. She can carry this.” That character is being the most vulnerable she’s ever been in that moment. If you have an actor who can hold a scene like that in a close-up, I think you should shoot it like that. A monologue in a close-up is very exciting to me.

Filmmaker: I really dug the score of the movie. It sounds like something out of Risky Business.

Filmmaker: Did she score to the movie?

Burnham: Yes. She scored to the movie and then we sat in her studio for a week in London and finished it. It was incredible to watch her work. She’s really theatrical and bold. I wanted the score to be foreground music, not background music.

Filmmaker: Let’s finish up by talking about my favorite scene — Kayla’s date with an equally awkward boy over a plate of chicken nuggets.

Burnham: That was a scene that had a little riffing in it. It’s not even that the lines are riffed, but the moments in between the lines. I would be like, “Wait five seconds before you say this” and they would improvise silently with their body language during that dead air. We shot about 27 days and I think we had five days where we could have two cameras. So we saved those days for things like the chicken nugget scene, the fire scene and the mall scene. The dialogue in those scenes had a looseness that would’ve been an absolute nightmare to cut together if we had shot them single camera. When two actors are vibing out together, you want to capture [both performances at the same time] — especially in that chicken nugget scene, because that scene was all about being messy and about talking over each other.