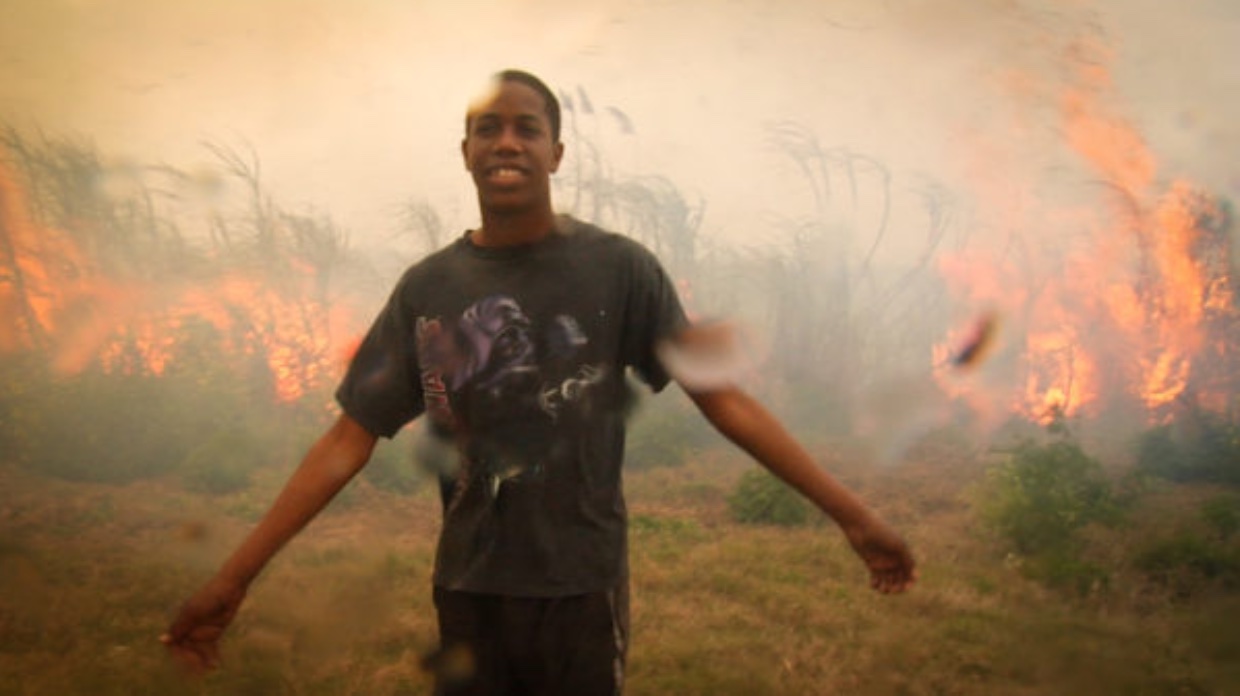 Well, the curtain has already risen, but I’ve yet to see a film — I’m heading to my first screening in about 90 minutes. So, it’s not too late for my annual list of movies I’m looking forward to at the Tribeca Film Festival. This list is just what it sounds like — anticipated movies based on buzz, knowledge of the filmmakers, word of mouth, etc. And it’s heavily skewed towards premiere titles that haven’t been reviewed yet. A quick note that this list has been easier to put together this year simply due to the sheer number of films across the sections that I genuinely have been waiting to land at one of the top festivals. There are plenty of 25 New Faces here as well as Filmmaker alumni, plus more than a few titles that just seem purely intriguing based on their descriptions. So, with the festival having entered its first full day of programming, let’s dive in.

To Dust. Shawn Snyder made our 2016 25 New Faces list with one of the most original screenplays we’ve read in years, the story of a Hassidic cantor obsessed with the decomposition of his deceased wife’s body. It’s less body horror than blackly comic philosophical inquiry.

All About Nina. I’ve been waiting for a debut feature from the very smart Eva Vives since working with her more than 15 years ago on Peter Sollett’s Raising Victor Vargas, for which she co-wrote the story. All About Nina stars the formidable Mary Elizabeth Winstead as an L.A. standup comedian who mines both her personal life and the headlines for raw, confrontational material. Common co-stars in this relationship drama from a director we highlighted on our 25 New Faces way back in 2000.

Island of the Hungry Ghosts. In what sounds like a fascinating metaphoric collision, Australian debuting filmmaker Gabrielle Brady explores a small island in the Indian Ocean that is the site of not just one of the planet’s largest migrations — the trek of 40 million crabs — but also a detention center for asylum seekers. History, psychology and nature film all coexist here.

Spheres: Pale Blue Dot. Eliza McNitt’s previous Spheres: Songs of Spacetime premiered at Sundance, and it’s one of the three of four best VR pieces I’ve ever seen. She continues her interstellar journey at Tribeca with this second installment of a planned trilogy, which connects headset-wearing viewers to the Big Bang.

The Fourth Estate. Documentary titan Liz Garbus ventures into the home of the Gray Lady for a story that was timely when she shot it and even more timely now: the way journalists — here, the New York Times — are handling the “fake news” administration of Donald Trump.

All These Small Moments. IFP Narrative Lab alumni Melissa Miller-Costanzo got me intrigued about her debut feature with these two pieces she wrote for Filmmaker on transitioning from a below-the-line art department coordinator to writer/director. Plus, she’s got amazing female costars (Molly Ringwald and Jemima Kirke) in this tale of first love set against parental relationship issues.

Chalkroom. If you can’t make the drive up to Mass MOCA, then make sure not to miss Laurie Anderson and Hsin-Chien Huang’s VR piece, Chalkroom, at Tribeca. I saw this work’s companion piece there not too long ago, and Anderson, whose work has grappled with new technology for decades, gracefully solved some of the VR medium’s most vexing problems with a single poetic swoop. I can’t wait to see this one that I missed.

Ghostbox Cowboy. John Maringouin, selected for 25 New Faces in 2006, is two for two in my book. Running Stumbled is the best drug-abusing-father-reconciliation doc I’ve ever seen, and Big River Man the best neo-Herzogian sports portraiture movie. His new fiction film, a dark and I’m sure anarchic business satire, stars David Zellner (yes, of the Zellner Brothers) as an American inventor trying to strike it rich in China, and I’m told the film skirts the edges of doc reality with its absurd story.

When She Runs. Following a stunning series of experimental shorts, Robert Machoian and Rodrigo Ojeda-Beck made their debut feature Forty Years From Yesterday and followed it with the affecting youth portrait, God Bless the Child. These filmmakers have an amazing eye for character and place and a hypnotic touch when it comes to the rhythms of story. Their third feature details the life of a twentysomething mom struggling to make an Olympic training team.

Call Her Ganda. PJ Raval, an extraordinary DP and director, brings his third feature to Tribeca twelve years after we put him on our 25 New Faces list. Teaming up with investigative journalist Meredith Talusan, he explores the murder of a transgender Filipina woman — a crime that was possibly committed by a U.S. Marine.

In the Soup. Before there was Filmmaker there was the Off-Hollywood Report, which I edited in its last few issues as well. And, I think, Alex Rockwell’s Sundance Grand Jury Prize-winning comedy In the Soup, starring Steve Buscemi and Seymour Cassell, might have been our last cover. If the title is unfamiliar to you, that’s because, despite its critical acclaim and crowd-pleasing nature, In the Soup virtually vanished after its theatrical run due to the vagaries of distribution licensing and archival practices back then. Rockwell has restored the film with the help of Kickstarter and Factory 25 so this indie classic of the early ’90s can now be properly discovered anew.

Phantom Cowboys. This is interesting: Following his teen drama Hide Your Smiling Faces, Daniel Patrick Carbone returns to Tribeca with another film about young adults, this time a doc, and set not in one location but three. What’s more, the doc was filmed over years, allowing Carbone to capture his subjects at two different formative moments in their lives.

Jonathan. I’ve been thinking a lot about the early days of Filmmaker in this 25th year, including all the great writers and editors who have passed through our doors. A large chunk of these folks have been early-career filmmakers themselves, and a pleasure of this job has been seeing them leave Filmmaker and, like Matt Ross, go on to make their movies. So, I’m especially eager to see what sounds like a fascinating piece of lo-fi sci-fi, Jonathan, by Bill Oliver, who worked as an associate editor for us in the very first years of this magazine. Bill went on to make shorts, and Jonathan, which stars Ansel Elgort, Patricia Clarkson and Suki Waterhouse, is his very first feature. I remember Bill being tremendously smart and savvy, so I’ll look forward to reporting back on this one.

Mapplethorpe. Early word is that this picture has that one thing a biopic needs — an extraordinary performance in the lead role, which Matt Smith reportedly deliver as he plays the transgressive New York photographer and artist Robert Mapplethorpe. The film is We Live in Public director Ondi Timmoner’s dramatic debut and is produced by, among others, Eliza Dushku. Nancy Schreiber lenses a film that received the support from the late artist’s foundation but not Patti Smith, who is played here by Marianne Rendón.

Roll Red Roll. Nancy Schwartzman, whose CV includes both film and tech (in addition to her film about consent, The Line, she created a mobile app, Circle of 6, that targeted sexual violence), arrives at Tribeca with her long-in-the-works debut feature, Roll Red Roll. It’s a deep look into the 2012 Steubenville rape case, covering not just the crime and trial but the aftermath and the attitudes it produced in the surrounding community.

Nigerian Prince. NYU Grad filmmaker won a million bucks last year from AT&T’s Untold Stories competition to make his debut film about an American teen who gets caught up in Nigerian cyber scams. Shot on location in Lagos, it was quickly post-produced to premiere at this year’s festival.

Ryuichi Sakamoto: Coda. The great Japanese composer and performer will participate in the Q&A following the premiere screening of Stephen Nomura Schible’s documentary, which covers five years in Sakamoto’s life, time that include his recovery from throat cancer as well as the recording of his magnificent last album, async.

Radium Girls. When I wrote my “How to Find a Producer” piece for Filmmaker a couple of years ago, Lydia Dean Pilcher was one of the first people I called for quotes. Her producing credits span three decades and include films like Jesus’s Son, The Namesake and Chinese Box. Here, she couples her longtime environmental activism by stepping, along with a fellow first-time filmmaker Ginny Mohler, into the director’s chair to make a period (1920s) drama dealing with industrial malfeasance, women’s health and the women’s movement.

Surviving Theater Nine. A couple of years ago Tim Sutton make Dark Night, a fictional feature that explored the lead-up to the Aurora, CO shooting during a screening of The Dark Knight Rises. Now, fascinatingly, there’s Surviving Theater Nine, a short — 40 minute — narrative made by one of the survivors of the shooting himself, Tim McGrath.

Yellow is Forbidden. Pietra Brettkelly follows up her excellent doc on archival film practices in Taliban-controlled Kabul (!) with something completely different: a portrait of couture designer Guo Pei, whose dresses are worn by the likes of Rihanna, that focuses on the relationship between her work and her success and her Chinese identity.