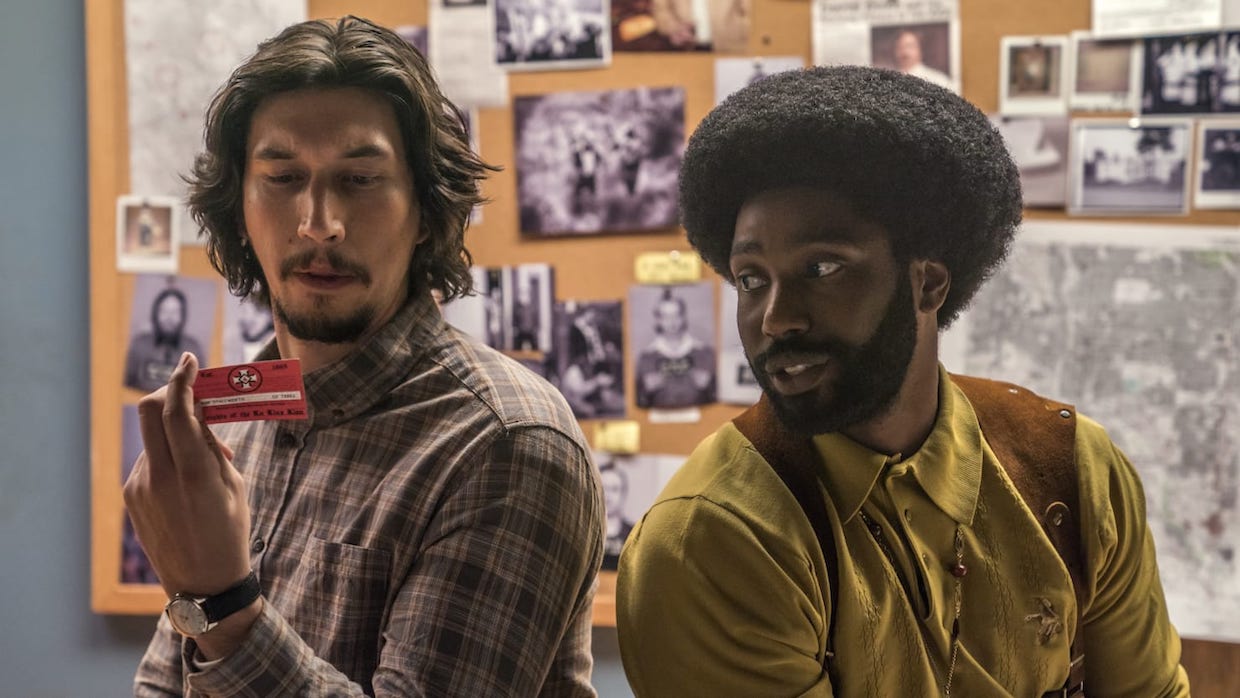 Among the markers of a great film—of a great work of art in general—is its ability to conjure itself up unannounced, repeatedly, in the light of neighboring films and artworks; it becomes a lens through which other work is viewed, a standard by which everything else is held, a shadow enlightening the world we now walk through. This is one way of briefly reiterating something I attempted to articulate in my third dispatch: Jean-Luc Godard’s The Image Bookis great art, corroborated for me by its persistent presence in my consciousness during the last several days of movie watching—most notably (and unexpectedly) in two of the festival’s most incendiary, contentious objects: Spike Lee’s BlacKkKlansman, and Lars von Trier’s The House That Jack Built. While all three of these films operate according to wildly distinct agendas, I was struck, even moved by certain commonalities between them: their attendance to cinema history (including, indeed, their makers’ own filmographies and legacies); their provocative engagements with current social and political temperatures; and their willingness to be laughable, offensive, even possibly harmful. Together, they’ve functionally reminded festival-goers here (at least those of us willing to listen) that an agreeable position is not always the most productive route to take.

For BlacKkKlansman—which is, in most ways, less confrontational than its title suggests—Lee frames a caricatured account of an actual early-70s undercover police investigation in Colorado Springs with appropriated footage: an endless field of wounded Confederate soldiers taken from Gone with the Wind (1939) to open the film, Trump-inspired racial clashes and attacks taken from national news networks for its epilogue. Additionally, near the film’s climax, Lee imagines a Ku Klux Klan initiation ceremony that’s chased with a rowdy, apparently complete screening of D.W. Griffith’s The Birth of a Nation (1915) for attending members of the organization—all beneath a monologue about lynchings and the absolute, irredeemable racism of Griffith’s films (a point that isn’t inarguable as it is presented here). Elsewhere, Trump’s patented one-liners and appropriated terms (“America first,” “Make America great again,” et al) liberally slip out of vicious white men’s mouths, lest anyone at all miss the line being drawn between then and now.

If there’s one road Lee takes that Godard never would, it’s the one towards clarity and didacticism. Lee’s might make for less dynamic art, but it doesn’t cheapen the stakes. There’s an urgency and implicit dread to Lee’s dogmatic approach—a fear that we can’t, at any cost, let these points escape anyone again. Also unlike Godard, Lee opts for an inclusive, popular form. The structure is clear, the images are occupied by affable celebrities, and the jokes are broad—preferring physical goofs and satisfying tell-offs over esoteric in-jokes and puns. As is arguably true of the recent, race-concerned films of Quentin Tarantino (sorry, he’s apposite), catharsis is achieved, and in some ways amplified, through reductionism. To evoke an equally less palatable figure, BlacKkKlansman often reminded me of Michael Moore’s documentaries: too determined and angry to be nuanced, placing most of its energy into arming its audience with the basic discursive tools that will allow them to become engaged with revolutionary thought. In that sense, BlacKkKlansman may, ironically, be Lee’s whitest film since 25th Hour; it operates under the impression that it can change people’s minds. And you know what, if it at all aids in the prevention of a 2016 repeat, it will at least have been more functional—indeed, more revolutionary— than much so-called great art.

And if we’re going to speak of great art, of unpalatable figures, of stakes and confrontation, we need look no further than Lars von Trier’s enormously problematic (and just plain enormous) The House That Jack Built—a film I have quite a bit of confidence and trepidation in declaring a masterpiece. Presumably deemed too antithetical to the current zeitgeist to compete for the Palme d’Or (or, also valid, too disgusting and misanthropic), von Trier’s film ambitiously attempts to accomplish no less than offer a treatise on the function of art, a take-down on the primacy of empathy, and provide a declaration of purpose and intent to anyone who has ever voiced an objection to his nature. Segmented, per usual, into irregularly-shaped chapters (five of them—like The Image Book!—plus an epilogue), the film recounts and illustrates several “randomly chosen” incidents in which the movie’s von Trier alter ego, Jack (Matt Dillon), meets and murders his (mostly but not exclusively female) victims. The movie is always willfully dire, but its initial “incidents” come across as cynical and tasteless for its own sake. The women are vapid, responsible for their own victimhood, and greeted with gruesome fates presented as swiftly as they are graphically.

But to say the movie is a galling exercise in pure sadism is as easy as it is ultimately incorrect. From its fourth incident until its conclusion, The House That Jack Built escalates into a full-on essay on the aforementioned themes and concerns, rigorously and spiritedly halting its procession into hell to dialectically defend itself—to argue, in conversation with a faceless man named Verge (Bruno Ganz, because I can only imagine that Udo Kier was unavailable), with the aide of images from art history, scenes from his own films, and animated charts and graphs, for the value of its approach, its strategy for representing women and men in the ways that it does. That von Trier should wear his pathologies on its sleeve is neither new nor particularly interesting in itself; that he is able to exhibit such a clear-eyed vantage of his doomed, self-destructive existence in a way that manages to be wrenching, sublime and never redemptive, is miraculous. Von Trier understands perfectly well that there is no turning back from his trajectory, and, likewise, that the most productive approach to humanism is to represent the world at its worst—suggesting that we can best understand ourselves, our moral standing, by experiencing the sensations generated by seeing the world at its most misbehaved and immoral. Through the unrelentingly inhumane depravity that seethes through every fiber of this hellscape, all I know is that what I saw and felt was filled with an indescribable beauty. If that unveils something in myself that I’d have best left undisclosed, so be it. As to what exactly that is, I’m a bit too scared to look.