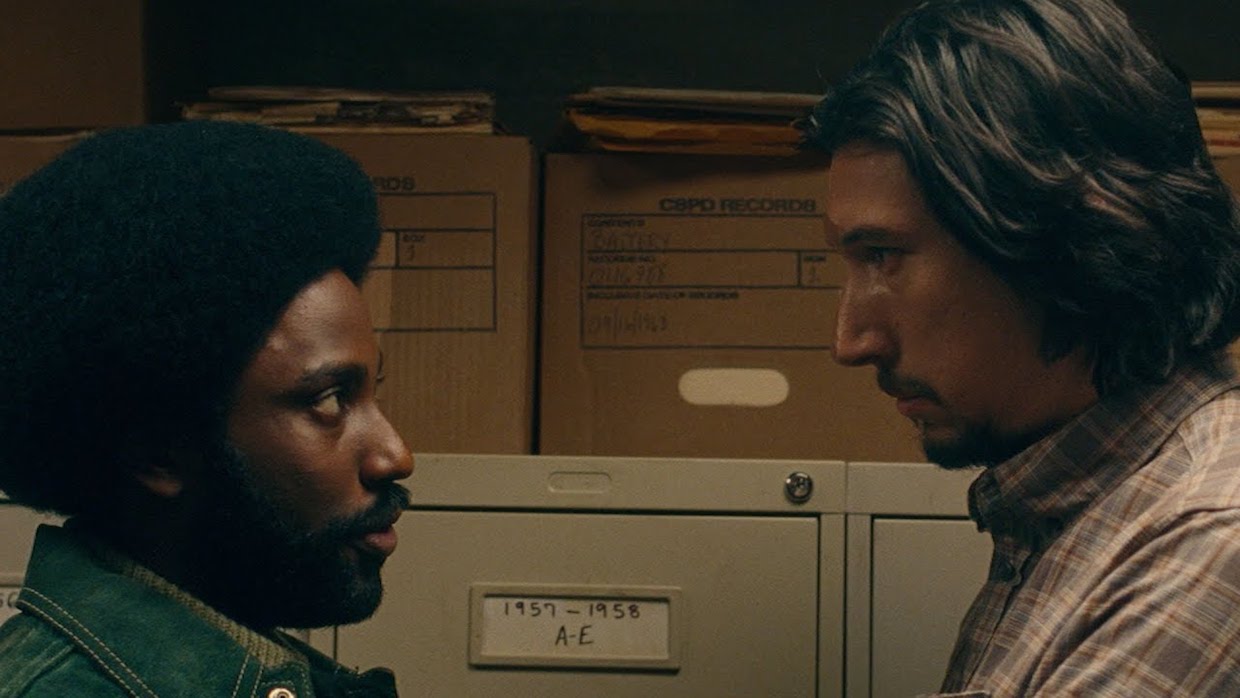 by Vadim Rizov
in Interviews, Screenwriters
on Aug 9, 2018

When I went to see BlacKkKlansman earlier this summer, I was startled to completely lose it two minutes in. The opening scene is a fire-breathing racist monologue by Alec Baldwin as a segregationist leader. I knew the premise of the film — the true story of how black police officer Ron Stallworth (John David Washington) infiltrated a Colorado branch of the KKK with the help of a white partner, Flip Zimmerman (Adam Driver), in the late ’70s — and figured a fair amount of racist invective would be involved. What I did not expect was to hear Baldwin spit out the words “fucking Jews” with great venom, and for this particular epithet to be dropped with great regularity over the film’s running time. It’s not that the KKK isn’t gunning for everyone who doesn’t belong to their especially moronic vision of White America, it’s just that I didn’t expect Spike Lee to go there. Despite his (very understandable) sympathy for Louis Farrakhan, I never thought Lee was even remotely anti-Semitic; I just didn’t know the topic was of interest to him.

I was surprised by the extent that BlacKkKlansman foregrounds the topic of anti-Semitism to perhaps a quarter of its running time; after seeing the film, I went back to reread the Cannes reviews, only to find that most of them mentioned this element in passing or not at all, so it’s not like I wasn’t paying attention the first time around. Fortunately, an essay published by Abraham Riesman today (just in time!) breaks this aspect down comprehensively. “Many of us have been passing, and I mean that in a very specific way,” he writes. “A white Jew can pass insofar as they can feel like they’re only part of a marginalized minority in theory. Given that, it can be all too easy to eschew solidarity with other minority populations.”

Screenwriters Charlie Wachtel and David Rabinowitz are two of the credited screenwriters on BlacKkKlansman, having optioned Stallworth’s memoir. The decision to make Zimmerman Jewish was fictional and their decision; in their telling, it was a decision Spike Lee took and ran with further than they anticipated. I was so struck by the film’s gutsy, fearless and utterly un-bathetic dive into the topic that when they reached out and offered an interview, I had to say yes. My questions are a little longer and more personal than usual; this one hit a nerve.

Filmmaker: When you guys were looking for a screenplay to write, was there an idea that a particular genre space make it easier to sell your work?

Charlie Wachtel: I think the decision was practical. Before BlacKkKlansman, we had literally written one other thing together, a TV pilot, and that had gotten us some meetings. That was a crime drama, so we knew we wanted to stay in the thriller space.

David Rabinowitz: We like thrillers and genre stuff. For whatever reason, we gravitate toward true stories, just like with the pilot. We like to say we do genre takes on true stories, and BlacKkKlansman was exactly that.

Wachtel: When people hear this BlacKkKlansman story, they think, “Oh, that sounds like the Dave Chappelle skit, or like something that could be a comedy.” But our instincts were to form it as a genre piece, while still preserving some of the comedic elements.

Filmmaker: You seem pretty seriously trained in standard screenwriting techniques. When you think about what it means to arrange a thriller like this, what are some of the points? Act divisions, regular spikes in the arc?

Wachtel: Every project’s different. When you’re adapting a true story, we’re looking at it from a macro sense: there’s a hook here, there’s some really interesting scenes in the book, but a few interesting scenes and some incidents aren’t a movie. So we were looking at it as, we’ve got a first act from the book and we’ve got some things that will get us to the end. It wasn’t until the part of the book where we see the encounter between Ron and David Duke, where we’re like, “Okay. That’s going to go in the climax. This is the third act moment that we can build towards.” What’s the thing that’s going to provide the engine to a story that’s going to carry the audience all the way through? We started looking at the book as the foundation for what would be a genre film. Then we pivoted, looking at it instead as being a character driven film. Once we started focusing on character, everything naturally fit into place.

Rabinowitz: I also think a major turning point was when we decided to make Ron’s partner Jewish.

Filmmaker: Yeah, could you talk about that? That’s part of a lot of my curiosity.

Wachtel: I think it was just a practical decision. If you’re going to be living with this character who is going to infiltrate the Klan, you may as well up the stakes by giving him some sort of personal attachment.

Rabinowitz: It’s already high stakes that he’s going undercover. Making him Jewish just makes it that much more. On top of that, we’re both Jewish, so it just makes sense writing something a little bit more from our perspective; it was our way into the story.

Filmmaker: There are three crucial scenes in this film regarding Flip Zimmerman’s awareness of his Jewishness. The first scene is this quick toss-off line. He’s asked, “Are you Jewish?” “I don’t know. Am I?” The second scene is this monologue about how he never thought about having to be Jewish, because that’s the whole point of assimilating; you don’t have to think about that. Now, he has to be aware of that, which is a conversation that I think I and every other secular Jew in this country have had since the election multiple times. The third scene is when he’s confronted by Stallworth. They’re talking about physical danger but then it just goes to the ideological level: why are you not able to connect these shared experiences of struggle? Why is this so hard for you? I know you’ve been working on this since 2015, but you’re getting into terrain that’s pretty directly connected to the present, although I also don’t know how much that has to do with rewrites after Spike and his writing partner, Kevin Wilmott, got involved.

Wachtel: We were hired to do a rewrite in 2016, when all of this Trump mania was going on. So naturally, we seized on the opportunity to find these parallels between what was going on in the current world and what was happening in our story. We were definitely sensitive to all of that.

Rabinowitz: When we first wrote the script was we wanted to make Flip’s Judaism something that was very matter of fact. His character didn’t really grow up practicing Judaism. That he’s not seeing really about other people as a Jew, makes him think, “Well, I’m not really a Jewish person,” even though he technically is 100 percent. You don’t think about it until you’re confronted with it. What Spike and Kevin Willmott did was, they not only preserved that, but they expanded on it a little bit more. A lot of what they did with the screenplay was take things that were already there and make them more extreme.

Wachtel: For example, the lie detector sequence. One of the small details they added was, they had the actor Jasper Pääkkönen asked Adam Driver to drop his pants, so he can see if he’s circumcised.

Rabinowitz: I don’t know how we didn’t exploit that. That passed over our heads.

Wachtel: Yeah, and that would seem like an obvious thing to think about. But they saw it and they were able to get it in there.

Rabinowitz: When Spike came on, though, yeah, we were pretty much like, “Hey, here it is. Do what you want with it. It’s not just our thing anymore.” It’s now a Spike Lee movie. You know that he’s going to do a pass on the script and inject his Spike Lee voice into it, and that’s exactly what happened.

Filmmaker: Had anyone ever seriously floated the possibility of you guys directing it?

Wachtel: I think it’s something that had crossed our minds at a few different times, but given the subject matter, and especially given this being our first big break for screenwriting, it didn’t seem appropriate or necessary.

Filmmaker: Were you on set during production?

Rabinowitz: We were not on set. We did read the shooting script, we were sent that.

Wachtel: We supplied notes once the shooting script came in and had more or less a pretty good idea of what the movie was going to look like by the time we saw it.

Filmmaker: The Alec Baldwin opening, was that you guys or their addition?

Rabinowitz: That was Spike.

Filmmaker: I’m wondering if this is, again, another one of those elements that you mentioned that he and Kevin amplified. Two minutes into the movie, when Alec Baldwin just screams, “The fucking Jews,” which you hear over and over again throughout the movie — I just started laughing because I know exactly what this stuff is about. On some level, it will never stop cracking me up because it’s so profoundly stupid, but it’s also really dangerous. But it was weird to be in the room as a viewer who looks white, because there are these other people in the room and they’re maybe like, “Who is this white guy who thinks anti-Semitism is really, really funny?” Was the script always that charged and with that level of constant anti-Semitism of it? Were you were worried about how that rhetoric kind of plays when it hits the screen and an actual audience?

Rabinowitz: The script always had language like that, for sure. I don’t know. For me personally, I wasn’t really concerned on how it would hit, mostly because a) you know it’s based in reality b) these characters are saying it. c) you want it to make that impact. In terms of the anti-Semitic language specifically, I think part of the reason why that was such a big part from the beginning was not just the KKK, but David Duke’s involvement as a central figure of the story. When you research David Duke, especially now, he’s almost more against Jews than anyone else, which is kind of interesting. Jews are enemy number one. The anti-Semitic stuff throughout the script was always there. It’s probably something that was amplified a little bit more once Spike got involved.

Wachtel: David Duke called us out by name on one of his podcast episodes, which we stumbled upon. It was pretty… how would you describe it?

Rabinowitz: It was an honor, I guess.

Wachtel: And also kind of scary at the same time.