IFP PARTNERS WITH UN FOR ENVISION | By Mary Anderson Casavant 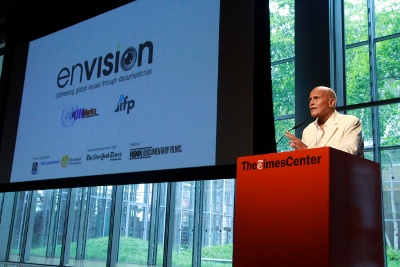 This weekend the documentarian as activist was discussed at “Envision: Addressing Global Issues Through Documentaries,” an event presented by the IFP and UN and hosted by The New York Times at The Times Center. In her introductory remarks, IFP Executive Director Joanna Vicente pledged that the program, now in its second year, would continue to use the UN’s Millennium Development Goals as its focal point and praised the program for attempting to “envision a better world for all and achieving that through media.” It was a sentiment echoed by Kiyoa Akasaka, the United Nations Under-Secretary-General for Communications and Public Information, who professed himself a “die-hard” fan of documentaries and praised filmmakers for “deepening our understanding of complex issues.”

The morning got off to an impressive start with a keynote speech by the iconic actor, singer and activist, Harry Belafonte. The former UNICEF ambassador passionately exclaimed that there was no “greater cause than the welfare of the children of our planet,” and went on to praise the power of media to instigate change, asserting, “Most of the solutions are not really complicated. What is needed is the human will to commit ourselves to what is morally right.”

Belafonte praised Jennifer Arnold‘s A Small Act, the documentary screening after his speech, saying that it had “deeply moved” him. (For more on Arnold, check out our interview, here.) Picking up the film’s theme that even the smallest act can make the largest difference, Belafonte recounted how he, Eleanor Roosevelt and Jackie Robinson had once organized an airlift that helped place 143 Kenyan students in various American universities — an action that violated a treaty between Great Britain and America. 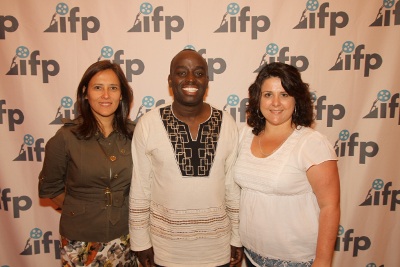 One of those students? Barack Obama, Senior. Belafonte marveled at how event the smallest charitable act can reshape the history of the world.

During the panel discussion “Education Obstacles & Solutions in Africa,” the power of documentary to change lives was driven home by the experiences of UN employee Chris Mburu, a man whose life story is featured in A Small Act. The recipient of a scholarship that sent him to secondary school, college and Harvard Law School, Mburu founded a small non-profit Hilde Back Education Fund, named after the Swedish woman who sponsored his education.

After one screening of the film at the Sundance Film Festival, he received more than $90,000 in donations, an astounding sum for an organization used to functioning on less than $8,000 a year and proof of what his co-panelist Penny Abeywardena, the Senior Manger of Education/Girls and Women for the Clinton Global Initiative, termed “the advocacy function of documentaries.” Although grateful for the money, Mburu said his real hope was that the film would encourage other Kenyans to form similar organizations to his in their own communities.

A later panel, “The Individual as Documentarian and the Impact of User-Generated Media,” explored the work of citizen journalists, activists intent on building what one of them, Malika Dutt, termed “a human rights culture” through user-generated material. Each panelist screened an example of work produced through their organizations, small videos created by some of the world’s poorest citizens. As Ryan Schlief, the Asia Program Manager of Witness, repeatedly pointed out, sometimes being a true media activist is about, “getting out of the way and allowing the local activists to take charge.”

It would be nice to say that the event shifted focus with a screening of Waiting for Superman, a documentary about the problems with the American education system directed by Davis Guggenheim and produced by Lesley Chilcott. It would be nice to say that the problems facing the American education system are worlds away from that of a developing country like the Kenya of A Small Act, but it was impossible not to notice the parallels between the faces of Kenyan students, anxiously waiting to find out if they got a spot in a scholarship program and the faces of the American students, desperately hoping that their number will be picked at a charter school library. As the afternoon keynote speaker and foreign editor of The New York Times, Susan Chira pointed out, both films are about children forced to “rush for just a few spaces.”

Waiting for Superman is documentary advocacy at its best — an intelligent takedown, unafraid to point fingers, mainly at a teacher’s union bent on protecting all teachers, even the bad ones. Threaded throughout its often shocking statistics and interviews with educators are the stories of parents desperately trying to get their kids out of a failing public school and into a thriving charter. 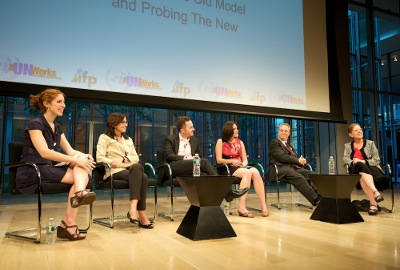 During a rather lively panel discussion afterwards, Chilcott recounted how after the Sundance screening, “People got all emotional, and people got all angry we didn’t give them anything to do, so we added the call to action at the end [directing people to the website.] On our website you can find out about your local school system and about volunteering.” However, she and her other panelists warned that volunteering alone can’t fix a broken system. As Christopher Cerf, the former deputy chancellor at the Department of Education in New York City pointed out, “there’s a requirement for moral outrage.” He went on that “most Americans believe their kids’ school is fine,” a belief he called a “falsehood.”

Waiting for Superman is sure to outrage when it’s released this fall. It’s only a matter of time before it’s accused of being too pro-charter by those who support the teacher’s union, an accusation Chilcott welcomed, pointing out that no matter how the debate is framed, it’s an important thing that we have it. Based on the success of An Inconvenient Truth, Guggenheim and Chilcott’s previous film, I have little doubt that Welcome to Superman will provoke a similar sized debate, a feat that is certainly no small act.