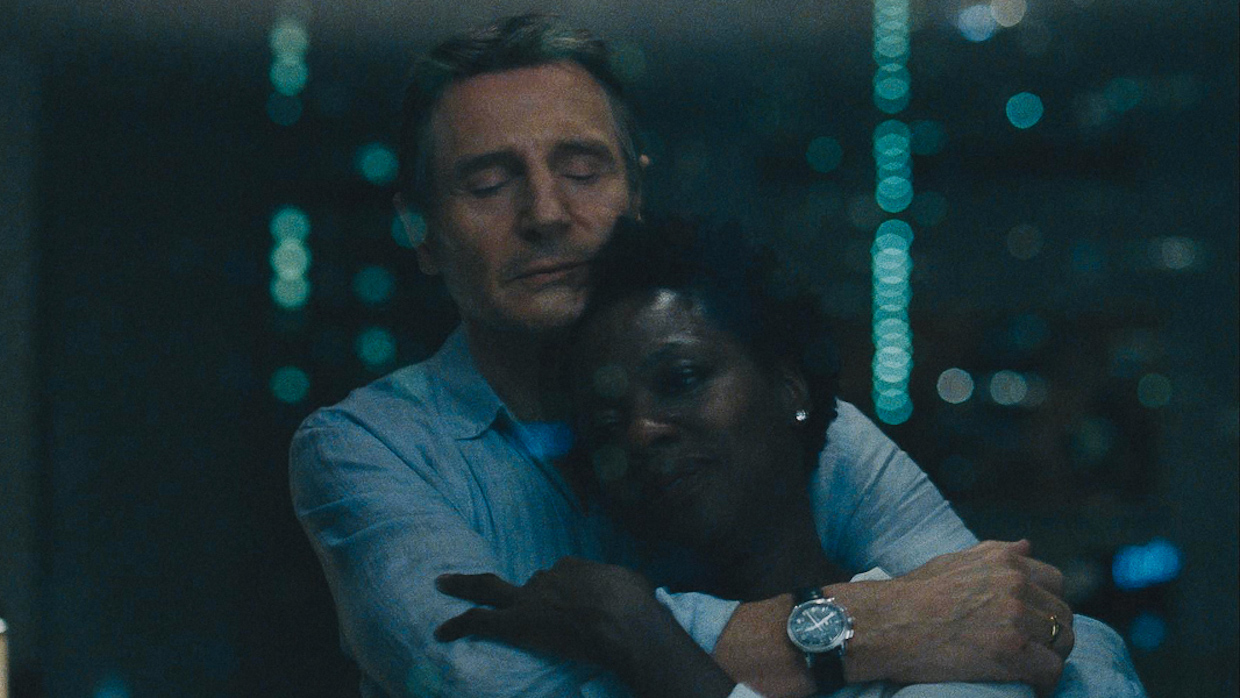 The first shot of Steve McQueen’s Widows is in keeping with the Master Shot Severity of Hunger, Shame and 12 Years a Slave: an overhead two-shot of Veronica (Viola Davis) and Harry Rawlins (Liam Neeson) in bed, held at great length, allowing for durational “naturalistic” acting in a rigorously defined space. “Severity” is descriptive, not necessarily a pejorative: the solemn Steadicam virtuosities and meticulously imprisoning static compositions of Shame only heightened the silliness of the story of a rich man who does zero work onscreen while having sex with an effortlessly accrued slew of partners but who, like Brian Wilson, sometimes still feels Very Sad. McQueen’s methods to date, which effectively restrict him to either conspicuous movement or master shot framing, worked better in Hunger and 12 Years a Slave; still, it was probably time for a change. That comes in the second shot, which cuts right to a heist-gone-wrong; McQueen alternates the domestic past and action-movie present, climaxing with a massive gasoline-fueled explosion of the type mandatory in ’80s action filmmaking. This is an impressively executed set piece, no less so for being a bit silly; it’s nice to see McQueen relax. Throughout Widows, he retains his signature formal tics (one character spends as much time running in Steadicam shots as Michael Fassbender did in Shame) but cuts much faster in a film that (unsurprisingly, based as it is on a six-episode 1983 BBC miniseries) feels like one season of TV crammed into 130 minutes.

Obligatory twists aside, the plot is simple: after Harry and three co-conspirators die in said heist, their completely unprepared widows are forced, for various plot reasons, to pull off one big score of their own. Relocating the story from London to Chicago, Widows world-builds by linking the widows and the criminal milieu they must master to big-city political corruption. This allows for heavy nods to, or explicit discussions of, how e.g. minority-owned businesses are denied the opportunity to establish themselves because of banks’ unwillingness to loan them money. This is a small inserted speech that feels more than a little like an explainer, but as it’s pretty right-on I’ll allow it. Faster cutting or no, Widows isn’t termite art where social comment sneaks in at the edges; the movie alt-tabs between Entertainment and Edification, each clearly occupying its own separate space. Because I agree with many, if not all, of its diagnostic moments, I’m mostly OK with this, but one scene’s way over-the-top (skip to the next paragraph if you don’t want to know): the shooting of an unarmed young black man by a trigger-happy cop. This familiar scene isn’t Too Much, but reverse-cutting at the moment of death to an overhead crane angle that takes in an ironically juxtaposing wall of Hope/Change Shepherd Fairey posters (how far we haven’t come, etc.) definitely is.

Widows is all over the place even when it isn’t purposefully serious. There are four widows, and though Davis is definitely the main protagonist that still requires establishing four different socioeconomic landscapes even before you get to Colin Farrell’s reluctant Democratic politician, his perpetually barking, beyond-Daley-evil father (Robert Duvall!) and their primary opponents, one an underdog (Brian Tyree Henry) with an enforcer who’s come straight out of some other, much more shamelessly violent film. As stone-cold psychotic Jalemme, Daniel Kaluuya threatens to unbalance the whole enterprise; his character is the kind of implacably unkillable force of violence that’s closer to Robocop than anything human. (See also Amy, the antihero of co-writer Gillian Flynn’s Gone Girl, who in David Fincher’s movie version kills a man, then drives home and gets out of the car cartoonishly soaked in blood hours later.) Kaluuya’s two big scenes involve killing people; he lurches into each with inhuman assurance, and he’s incredibly/cartoonishly compelling to watch. (McQueen tries to underline this a little too hard; setting a torture scene in a bowling alley is going to bring memories of There Will Be Blood whether it’s intended or not, and no one gunning for that is likely to win.) The unhealthy relish for specific forms of bloody violence seems very in keeping with Flynn’s oeuvre, as do the recurring scenes of women being incredibly nasty to each other.

The incoherence doesn’t detract from what’s a mostly entertaining movie. There is a final heist to look forward to, but until then this is mostly fast-paced drama, tracking a lot of different threads with reasonable dispatch; there’s not much more to it, but it’s certainly more nimble and entertaining than a lot of prestige-y fare. McQueen sometimes comes up with admirably perverse approaches to script problems; there’s a long scene which is basically Farrell in the back of a car bitching—necessary to establish some key points about his character but not all that interesting. Solution: mount the camera on the dashboard, pointing left with a nice view of the passing streets, hold for a third of the shot, re-orient to a head-on view full on for another third, then pivot right for the final third. That keeps the eye moving, takes in a lot of passing scenery on both sides that establishes how the topography changes in a short ride from the poor to rich side of town, and allows for different types of reflections on the car’s hood and glass, and it diminishes the dullness of the scene as a bonus. A certain ideological incoherence is probably unavoidably imbricated in any major production, and I was amused to see in the end credits that Widows (a film, in part, unabashedly about systemic racism) credits as a consultant Bernard Kerik, the disgraced former NYPD police commissioner sentenced to four years in federal prison for tax fraud. Kerik was also a regular on Fox News at one point, which means ideologically he’s the opposite of everything this movie is for; this is a Fox film, so it’s also an example of synergy in action. Weird things happen when you bundle together a large quantity of money for production purposes.