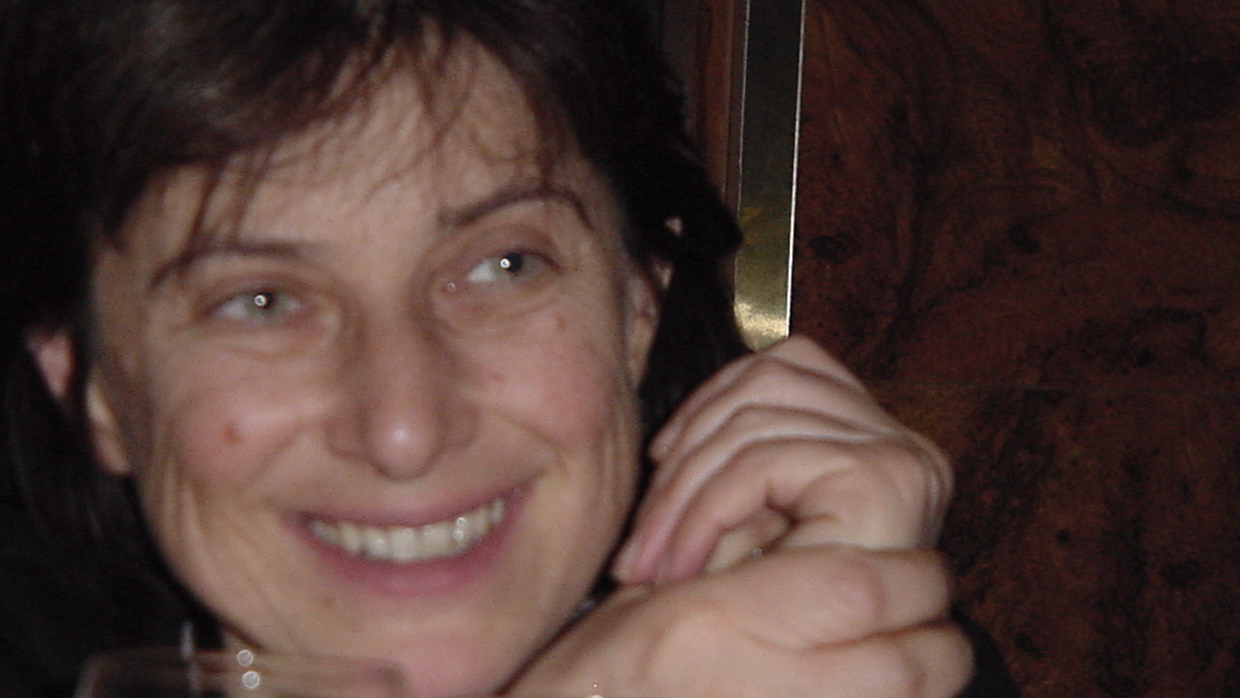 Director Chantal Akerman died three years ago today, and I wrote the following remembrance in the Filmmaker newsletter just a few days later but never posted it online. I wrote it from the Venice Biennale College Cinema, where I arrive again today. So, it seems fitting to remember Akerman once again by finally posting it here. (Photo above, taken on an 1MP digital camera at the Rotterdam Film Festival, 2001.)

Here in Venice, on the small island of San Servolo, we were talking about Jeanne Dielman. Tom Quinn, one of the filmmakers attending the Biennale College Cinema, had included a still from Chantal Akerman’s masterpiece in his project’s look book. Like that film, Quinn’s film deals with a middle-aged woman and work, and the image unlocked a discussion about many things. Quinn said that he used it as a formal reference, so, of course, we talked about style, composition, framing. But that shot of Delphine Seyrig in her kitchen also made us talk about the historical context of the labor performed by Quinn’s protagonist — how her performance of her work represented broader ideas about, in her case, not gender roles but class, tradition, technology and the effects of a changing economy on the workers it leaves behind.

And we talked about the challenges of depicting routine, tedium, and the importance in filmmaking of well-observed detail. Later, I went back and watched some clips from Jeanne Dielman, 23 Quai de Commerce, 1080 Bruxelles on YouTube, because it has been a while since I’ve seen it. As Dielman, played by the great Delphine Seyrig, peels potatoes, or sits in her living room, Akerman’s camera, always from a single fixed position, gazes directly at her. The shots make us restless but, strangely, their coolness, and Seyrig’s stoic performance, suggest, or, rather, make us ponder her interior state. If we are bored, she must be too. What is she thinking? What have so many who have been performing this work been thinking?

How vital that film remains! Forty years later, it is still inspiring and provoking, not just in pages of academic publications but in rooms full of young filmmakers puzzling out their scenarios in hopes of making their features next year.

Our conversation on San Servolo about Jeanne Dielman occurred before the terrible news this week that Akerman passed away in Paris at the age of 65. As this newsletter lands in your inbox, the Film Society of Lincoln Center, as a sort of memorial, is screening it at Lincoln Center.

For many, Jeanne Dielman was their first encounter with Akerman’s work; for me, it was another masterpiece, News from Home, which I saw in college, when I was away from home and encountering New York City for the first time. Also conceptually rigorous, it consists of static shots of New York streets and building exteriors overlaid with voiceover of Akerman reading letters sent by her mother in Belgium. “I dream about you and hope you’re happy,” one letter reads. News from Home is a movie about many things — displacement, longing, distance, histories, mothers and daughters. Like much of Akerman’s work, its formal restraint and elegantly simple concept allow space for the viewer to find his or her own meanings. (I like, for example, Eric Hynes’s essay about what the film has meant to him.

I got to know Akerman over the years, not as a journalist, but through the worlds of film production and festivals. I can’t say we were close, but I grew to consider her a friend. And while much of the press that has come out this week has rightfully asserted her place in the film pantheon, I keep remembering the person who was such a passionate, bracingly funny, at times fragile, yet always magnetic presence. There was a gravity in her deep, rich voice, and it could produce a theatrical effect which, with full self-awareness, she’d use as much for humor as seriousness. And for someone thought of as so intimidating — which, yes, she could be — Akerman was shockingly open and accessible, especially to the young. Akerman regularly taught, and our most recent encounters involved a particularly talented student of hers she wanted to support. Her classes were legendary (“Tears were usually spilled,” one colleague of hers told me) yet life-changing for her students. Perhaps her ability to connect to the young had to do with her fundamental lack of pretension, and this had to do with her constant engagement with the world. She was always working, and never one to rest on her formidable reputation. And because her work — not just films, but writing, visual art and gallery installations — traversed seismic change both inside and outside the film business, she was always fighting for its creation. A young filmmaker wanting to talk about the struggle to make work today would find a willing soul to share a cigarette with in Akerman.

In articles, social media postings and blog posts, others have captured her well this week. On his Facebook, screenwriter Howard Rodman, who once worked with Akerman, calls her “complex, generous, impish, demanding, brilliant.” And in a post on the Film Society website, Kent Jones, after correctly citing her “opposition to grand pronouncements” and her “horror of cliches and neat formulations,” remembers Akerman as “direct, tough and emotionally extravagant. She was small in stature, but she commanded a room with her fatigued stance, her grand and sometimes wicked smile, her wild rough-grained voice and her eyes. The eyes had it. I’ve rarely looked into a pair of eyes so bewitching.”

As for me, I’m remembering little moments, like her lying on our bed in Rotterdam at the smoke-free Hotel Westin, looking with interest at short work by young American filmmakers on my iPad. She was smoking up a storm, as always, and I was stressfully waiting for that knock on the door and the 125 euro fine while Robin was telling me to calm down. Or the last time I saw her, about a year and a half ago at, rather ignominiously, a Pain Quotidien. She was intense and revealing that day, and there was a Five Easy Pieces-type moment having to do with the inauthenticities of the menu. (“You call yourself Le Pain Quotidian! You should be representing the French!”) And then the time I’ll always remember, when my phone lit up with her name one afternoon. Robin had told her that my own mother died several days previous, and she was calling to offer her sympathies. Our call lasted several minutes, and I remember few of the words — just the force of her attention and the kindness of the call from someone who knew mothers well.

I’m writing this at the airport, on my way home to New York. Yesterday I took the boat into Venice proper, to the Biennale to see Akerman’s newest installation. I didn’t know anything about it, but I imagined it dealt with her mother, who was the subject of the last Akerman work I viewed — another installation, Maniac Shadows, at The Kitchen in 2013 — and whose death is the subject of her final feature, No Home Movie, which screened this week at the New York Film Festival.

The new work, simply titled Now, is in the Biennale’s Arsenal section, about midway through, and consists of five hanging screens in a dark room. There’s a gallery plaque outside on which someone has scribbled “— 2015, RIP” next to Akerman’s birthdate. On the five screens: not images of her mother, or apartments, but exteriors, traveling shots of countrysides from somewhere in the Middle East. The camera is shaky, as if the material was shot from a speeding car escaping through a combat zone. On one screen occasionally the image will be still, the camera simply gazing at a rocky countryside. On the soundtrack: noise, calls to prayer, voices, bullets, explosions.

Scrunched on the floor in the corner, taking it all in, is a girl — late teens, dark, unruly hair, white t-shirt, black jeans. Across from her, I notice something in the other corner of the room. There are flowers — a makeshift memorial left, most likely, by a fan compelled to this work on the occasion of Akerman’s death. I wonder if it was the girl who left them. I sit on a bench in the middle of the room, between the various screens and take it all in too.

After several minutes, the girl gets up to leave, and I see that she was obscuring from view, on the floor, a little plastic light-up diorama, the kind you might see in a trinket stand, market stall or airport gift shop. There’s a river, and a mountain, with elephants in the distance, an airplane flying overhead, and, in the foreground, swimming fish. A child’s imagined paradise. I look back over at the little memorial and see there’s another one of these plastic dioramas on the floor there too, but the light has burned out, or it has been left unplugged. And there’s sundry junk strewn around the flowers, including a soda can, a non-Western brand. I realize that this might not be a memorial but part of the installation. I think the flowers are plastic. As I stare down at them, the surround sound in the room grows, and the rocket explosions get louder. But my ear is drawn to sounds coming from a tiny speaker mounted above the flowers, diorama and soda can. From it, cutting through the noise in the room, are the sounds of chirping birds.