“I Didn’t Want the Movie To Fall Into the Category of Just Being a Film for Other Filmmakers”: Duncan Skiles Talks About Directing The Clovehitch Killer 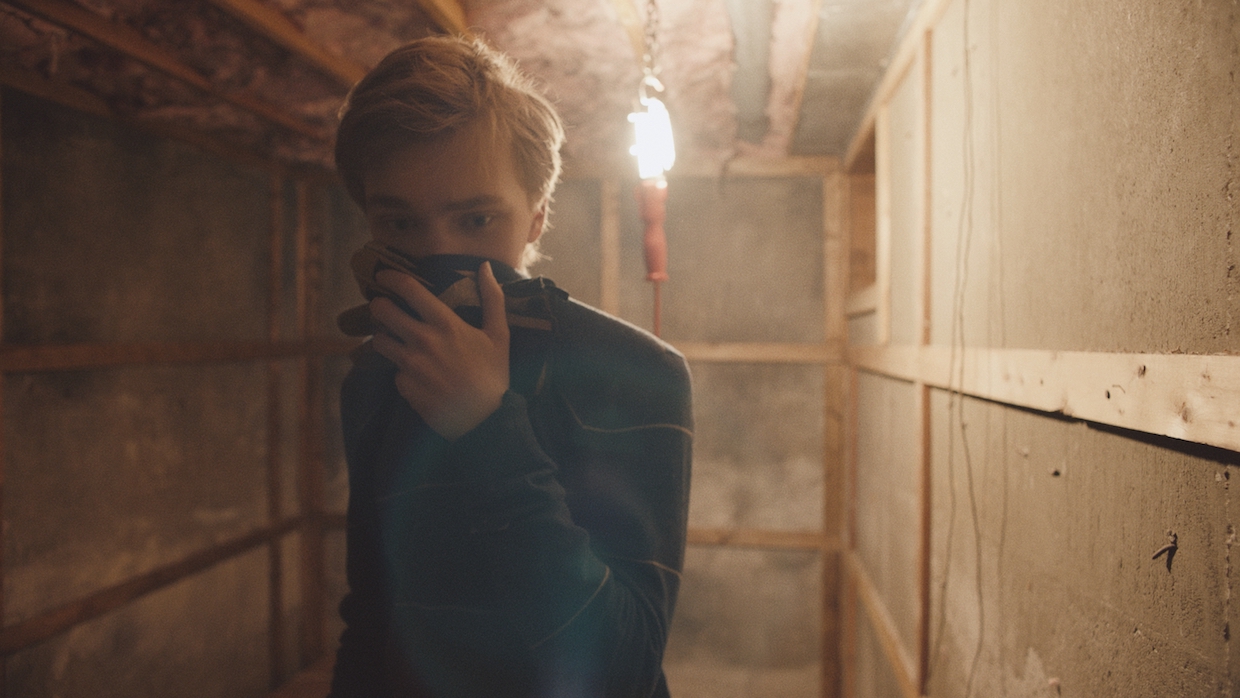 by Jim Hemphill
in Columns, Directors, Interviews
on Nov 14, 2018

Duncan Skiles’ new thriller The Clovehitch Killer is the kind of horror movie that gets under your skin and stays there, reverberating in the viewer’s head for hours, days, even weeks after it’s over. Its impact is all the more impressive given its low-key, understated quality. Skiles patiently, meticulously creates a mounting sense of dread without melodrama or explicit violence, relying instead on eerily stark, formal compositions and a career-best performance from Dylan McDermott.

McDermott plays Don Burnside, a family man and active member of his community whose affable, slightly goofy façade masks a serious dark side. When Don’s teenage son Tyler (Charlie Plummer) finds some extremely unpleasant photos and pornography hidden in his father’s truck and shed, trust starts to erode in their once solid relationship — especially when Tyler begins to suspect that his dad is a notorious local serial killer.

Deftly shifting points of view between Tyler, Don and a local girl (The Master’s Madisen Beaty), who’s obsessed with the serial killings and joins forces with Tyler, Skiles crafts a riveting meditation on evil and moral responsibility that’s genuinely cathartic without compromising its grim core. It’s last thing you may have expected from a director previously known for his work in comedy, including the puppet show The Fuzz.

Filmmaker spoke with Skiles by phone a week before The Clovehitch Killer’s release; it opens theatrically and on demand on November 16.

Filmmaker: The first thing I wanted to ask you about was the overall tone of the movie, which is beautifully sustained throughout. It’s subtle but forceful, and unsettling in an unusually restrained way. What other films and filmmakers did you have on your mind as models or references?

Duncan Skiles: The 1988 version of The Vanishing was a big influence, because of the way it took something that’s very disturbing and treated it matter-of-factly. There were a lot of scenes set during the day and there wasn’t much music and it switched perspectives and played around with the time line a little bit. I thought that the space it gave the audience just made it more frightening. David Fincher does something similar in Zodiac in the scene where the killer approaches the couple on a beautiful day, and it’s shot with wide frames and no music. I was thinking about that, and about Funny Games and Michael Haneke’s work. Right before shooting I saw Stranger by the Lake — again, no music, a lot of two-shots. I find that in all those movies less is more.

Filmmaker: One of the things I really liked about your film was that I felt you were really unerring in your awareness of how much disturbing material you needed to show the audience to get your point across without being exploitative. There’s very little onscreen violence, but the overall effect is quite chilling because you know just where to plant upsetting imagery and information.

Skiles: As an audience member I’m not into the cinema of suffering; I don’t like to watch torture or extreme realistic violence or anything like that. But I wanted to create enough tension for the audience that they would wish it was over, and then be relieved when Tyler comes back into the story after disappearing for a while. I paid very close attention to the presentation of the crime scene photos and all the supplemental material, like a Polaroid of someone tied up in a bathtub. I think that stuff goes a long way toward planting things in the audience’s minds.

Filmmaker: I also think the power of Dylan McDermott’s performance is effective in putting the audience on edge, because he’s so recognizable as a type of affable Midwestern dad but so clearly conveys the sense that something is way off. Where did the idea for that character come from?

Skiles: He was inspired by a real guy, a serial killer with a family who was a church leader and a Boy Scout leader. I’d prefer not to say his name, because I know that he enjoys the attention. I mixed the real guy with my own experience being in the Boy Scouts for a year, basing some things on my troop leader there. And there’s a little bit of my own dad in there. Not the serial killer part, but the dork — no offense, Dad [laughs] — who loves classic rock. We used to have Steely Dan on the soundtrack, but unfortunately we had to pull it out at the last minute. In terms of the wardrobe and things like that, I got a lot of details by going to Kentucky the summer before we shot and shooting candid pictures of people at churches and gas stations.

I was reticent about casting Dylan because he’s so handsome. I’ve always admired him and knew that he could go to a dark place, given his work on American Horror Story. But I wasn’t sure he could transform into this dorky Midwestern dad. But after years of trying to cast this role he was the first high profile actor who really wanted to do it, and he changed his hair and put himself on tape doing the accent. It was clear that he could do it, and then I got excited about doing a prosthetic belly and shaving his hairline back a little bit and doing that cool thing where you make an actor unrecognizable.

Filmmaker: You mentioned earlier that the shifting perspectives in The Vanishing were on your mind, and the movie very subtly moves back and forth between Tyler’s and Don’s points of view. Could you talk about how you differentiated between those visually?

Skiles: The cinematographer, Luke McCoubrey, and I talked a lot about how we wanted the visual style to feel somewhat reserved yet have two modes in the movie. One is Tyler mode and one is Don mode, and Tyler’s mode is a little bit more subjective; when he leaves the story the style becomes really objective and much more cold. The whole movie is reserved, but once Tyler leaves the story the frames become wider and the style reaches its peak point of cold precision. Then when Tyler comes back in, it gets a little bit warmer again. We wanted the whole thing to be fairly precise; the only time you see handheld is a confrontation between Tyler and Don that was probably out of necessity because we had so little time to shoot that stuff. Luke operated and he nailed it.

Filmmaker: I loved the rock solid quality of the compositions and camera movements, and I felt like that extended to the editing, which was very rigorous. In a movie like this, a shot or scene lasting just a few frames too long or too short could be really detrimental. How did you calibrate everything in the editing?

Skiles: After we wrapped, I let Andrew Hasse and Megan Brooks, who were the editors, take the footage for six weeks and work on their own without me. They had been on set too and were cutting a little bit while we were shooting and also making a few suggestions for pick-up shots here and there. It was kind of a first for me, but I stepped away and they made a script cut which was 2 1/2 hour long, and then they made their own cut where they re-ordered things that was 80 minutes long. The three of us convened in Hawaii, in Kauai, where the person who financed the movie has a house, and we worked for a month there going over the relative merits of different ordering and lengths. There was a lot of passionate advocating for various perspectives, which I appreciate; I like having collaborators with strong ideas that they fight for. When we showed the 80-minute version to the producers, they were like, “where the hell is the movie you shot?” So we started to fill it back in, and then we started showing it to all the people who worked on the property, like the groundskeeper and the housekeeper — anybody I could get who had no idea what it was about, and who preferably didn’t know much about movies or filmmaking. I feel like if the groundskeeper is into it, then it’s working on some level, and that was important to me because I knew I was taking some risks with the pacing and style and I didn’t want the movie to fall into the category of just being a film for other filmmakers.

Filmmaker: Were you nervous working in a genre that was a little different from what you’re generally known for, which is comedy?

Skiles: I moved towards comedy because things were going that way for me, and when you start working you kind of have to pick a label to get consistent work. That was the label I got, but I don’t think I was ever fully comfortable with it. I’m actually more comfortable creating suspense, but it was difficult convincing people to finance this movie given my résumé. It took a lot of time but I made a mood reel out of clips from other movies that helped a lot. It also helped that Chris Ford, who is the screenwriter on The Clovehitch Killer, had some success with Cop Car with the same production company, and he vouched for me. Initially I was scared that it wasn’t going to work, but I ended up rediscovering where my strengths are and where my interest is after a decade detour into comedy.

Jim Hemphill is the writer and director of the award-winning film The Trouble with the Truth, which is currently available on DVD and Amazon Prime. His website is www.jimhemphillfilms.com