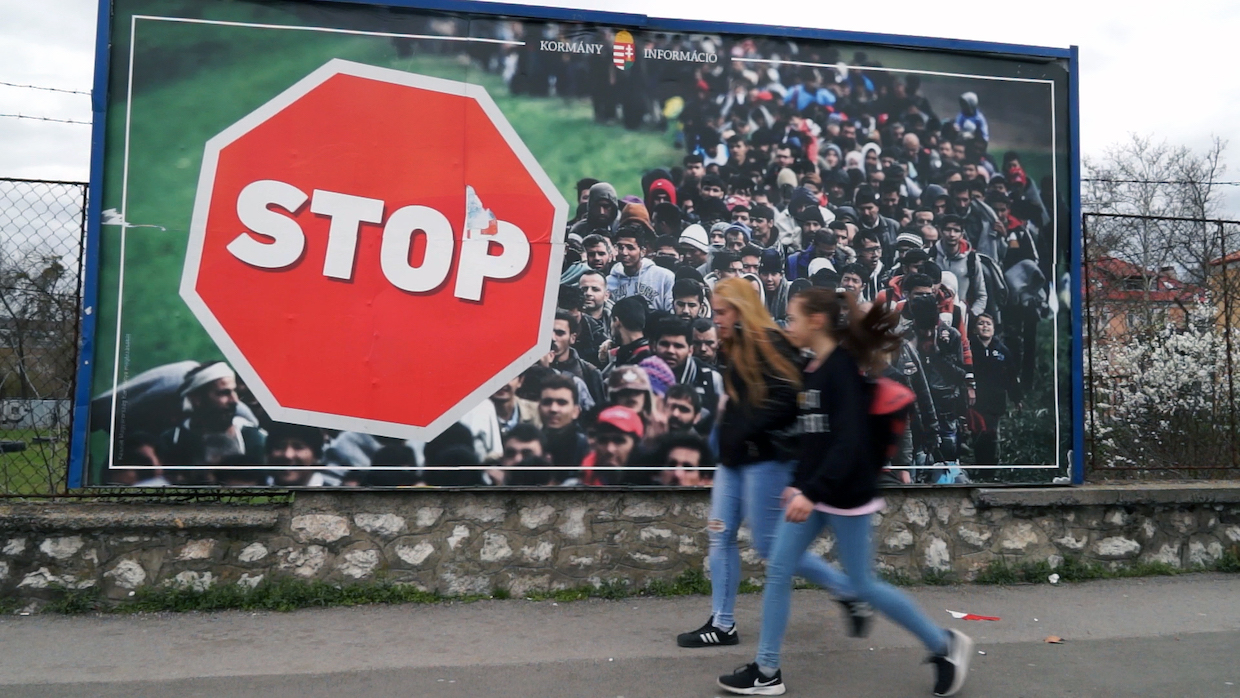 This edition of the International Documentary Film Festival Amsterdam (November 14th-25th) — now in its third decade, but also marking its inaugural year under the exciting new leadership of Syrian documentarian Orwa Nyrabia — offered one of the most binge-worthy lineups I’ve experienced in all my years covering the world’s largest doc fest. Of the nearly two-dozen films I managed to catch both in Amsterdam during my stay (once again guests were put up at the lovely — and couldn’t get more convenient — Hotel NH Carlton, which doubles as the fest’s headquarters) and online, not one disappointed. Indeed, veteran filmmakers working at the top of their game were well represented by some stellar films. This included Vitaly Mansky (Putin’s Witnesses), Werner Herzog (Meeting Gorbachev), Errol Morris (American Dharma), Ruth Beckermann (The Waldheim Waltz), Kazuo Hara (Extremely Private Eros: Love Song 1974), Sergei Loznitsa (The Trial), Maria Ramos (The Trial), Nikolaus Geyrhalter (The Border Fence) — and that’s just off the top of my head.

Which also means that these doc world luminaries don’t need my advocacy to convince you to support their work. (Anyone unfamiliar with Morris and his most recent Steve Bannon “horror film” is probably not reading this article.) So instead of ranting about how Netflix should just give us a Herzog History series already, I’d rather rave about another set of nonfiction artists that might not be on the wider radar — but who certainly deserve Stateside acclaim in the years to come.

Firstly — and in keeping with IDFA’s status as a signatory to the 5050×2020 Pledge for Gender Parity and Inclusion in Film Festivals — a trio of female filmmakers rocked my world this time around. Two of them were filmmakers whose latest projects I’d put on my IDFA must-see list: Katja Fedulova, a Deutschland-residing Russian expat whose Faith Hope Love I championed in my Hot Docs coverage last April; and Hungary’s Eszter Hajdú, who I’ve been anxiously awaiting a follow-up from since 2013’s Judgment in Hungary. The third, Swiss director Anja Kofmel, I knew nothing about (despite her doc’s Cannes debut), but whose Oscar-quality film intoxicated me for days.

Internationally premiering in the Frontlight section, Fedulova’s short The Patriot packs a slowly unfolding punch into its 35-minute running time. It also feels like a companion piece to Faith Hope Love, the director’s attempt to learn what it means to be a feminist in Putin’s Russia by following three young, politically-minded women in the homeland who upend all preconceived notions at every turn. With The Patriot, the clear-eyed expat focuses her acute gaze on Vassily Vlassov, who at 21 is the youngest member of the parliament and right-hand man to Vladimir Zhirinovsky, aka the “Russian Trump.”

While at first appearing shy and reserved — or perhaps that’s only in relation to his fist-fighting boss — the sweet young Vlassov incrementally opens up to reveal some increasingly disturbing values. In addition to being breezily racist, xenophobic and homophobic, he’s a staunch believer that a woman’s place is in the home, or in some “female job” like teaching — a stance made all the more heartbreaking as his wife struggles to find her own individual meaning in life. He’s also full of calculating ambition, with plans to be president by age 35. And yet Fedulova’s portrait of Vlassov is anything but dour. On the contrary, set to a silly, jaunty score, her elegantly composed shots capture more about the absurd state of Russian — and perhaps world — politics than any Duma stump speech ever could.

Director Eszter Hajdú is likewise concerned with current politics in her native land — in this case, Viktor Orbán’s Hungary. She spent the year leading up to last April’s election following the campaigns of both Orbán’s right-wing Fidesz party and its main rival, the pro-European, left-wing party headed by former prime minister Ferenc Gyurcsány, to whom she got incredible, fly-on-the-wall access. The resulting film, Hungary 2018, which premiered in the Competition for Feature-Length Documentary, is at once an engaging political campaign doc — with a charismatic former prime minister doing his best to “go high” as the current prime minister and his scare-tactical cronies sink ever lower on the xenophobia scale — and a canary-in-the-coal-mine history lesson. Forget the devastation felt in 2016 by the majority of the US that voted for Clinton over Trump. As Hajdú pans the faces of Gyurcsány and his left-leaning supporters on their election night, one thing is clear. They are not merely upset at having been defeated by Orbán and his power-consolidating party. It’s the loss of the country itself, and with it the hope of a democratic future. That’s ultimately evidenced by the end titles, which note that several crew members asked not to be listed in the credits for fear of government retaliation.

As cinematic and thought-provoking as those two standouts proved to be, though, it was Anja Kofmel’s astonishing Chris the Swiss that I couldn’t shake. Appearing in the Best of Fests section, the film is a true-crime detective story which combines Kofmel’s evocative, inky B&W animation with her own contemporary, live-action journey to tell the story — and learn the truth — about the life and death of Christian Würtenberg. “Chris the Swiss,” as he was known, was a young conflict journo from Switzerland who perished under mysterious circumstances in Bosnia during the Yugoslav Wars two decades ago. He also happened to be the cousin of Kofmel, who was only 10 when he died and has been haunted by the incident ever since.

Beautifully composed, with a strong sound design, era-appropriate score, and deft use of archival color images, the film is riveting in its unexpected twists — such as a phone call Kofmel makes to Carlos the Jackal, who sends her his condolences from prison — and harrowing turns. It’s also heartfelt and surprisingly eerie, as the director uses Chris’s own journals to retrace the last days of his life, rendering her cousin’s journey in her childhood memory, trapped-in-the past animation, while her own steps in his shoes are taken in today’s time. “In war the choice isn’t between good and bad — it’s between bad and very bad,” a mercenary who briefly knew Chris tells Kofmel towards the end. Ultimately, her highly idealistic, courageous cousin seems to have gotten caught in some funhouse mirror of moral clarity, the consequences of which continue for us all to this day.

As for the unheralded male filmmakers, three were behind two of the most compelling VR projects to be found at this year’s transformative IDFA DocLab. The first, selected for the IDFA DocLab Competition for Digital Storytelling, was a visceral work by Danish documentarian (and poet) Pejk Malinovski, which made me think that virtual reality just might hold the key to ending solitary confinement (if we can convince lawmakers to don those headsets). This Room is a virtual trip to an asylum center in Europe, specifically the tiny space that’s meant to house a refugee as he or she awaits a decision, sometimes for months if not years. As the viewer sits on a bunk bed, listening to first-person stories of quiet desperation and the whittling away of hope, the claustrophobia of the place becomes downright palpable. And yet, just when you think the situation couldn’t get more depressing, something shifts — or rather waves. Outside the window appears an ever-expanding, tranquil sea, simultaneously offering a sanctuary for memories, and an unexpected calming respite from those fierce political storms.

The second VR project, featured as part of the IDFA DocLab Spotlight program, was the lyrically named Accused no. 2: Walter Sisulu, an imaginative creation from filmmakers Gilles Porte and Nicolas Champeaux, whose feature-length doc The State Against Mandela and the Others seems to have served as inspiration for this piece. Combining (recently restored and digitized) audio recordings from South Africa’s infamous Rivonia Trial of the early 60s — which ultimately led to the life imprisonment sentences of 10 ANC anti-apartheid activists, including Nelson Mandela — with charcoal drawing-like animations, Accused no. 2: Walter Sisulu is a courtroom drama of epic racist proportions. From the center of the proceeding we watch as ANC member Walter Sisulu, calm and dignified, is cross-examined by a pompous white prosecutor, turn to see the towering white judge looming like a robed reaper nearby, then spin a bit more in our seat to take in the nervous black faces similarly condemned. The carousel of injustice just goes round and round.

Finally, I should give a brief mention to “Ryoji Ikeda: datamatics” (ver.2.0), a mind-blowing exhibition at the Eye Filmmuseum presented in partnership with IDFA, in which the Japanese sound and visual artist has taken over giant screens (and a floor) with computer-generated images, software codes and patterns throughout multiple rooms. It proves both hypnotic and oddly lulling — in other words, the perfect way to let the mind wander after a deep thinking, doc-filled day.