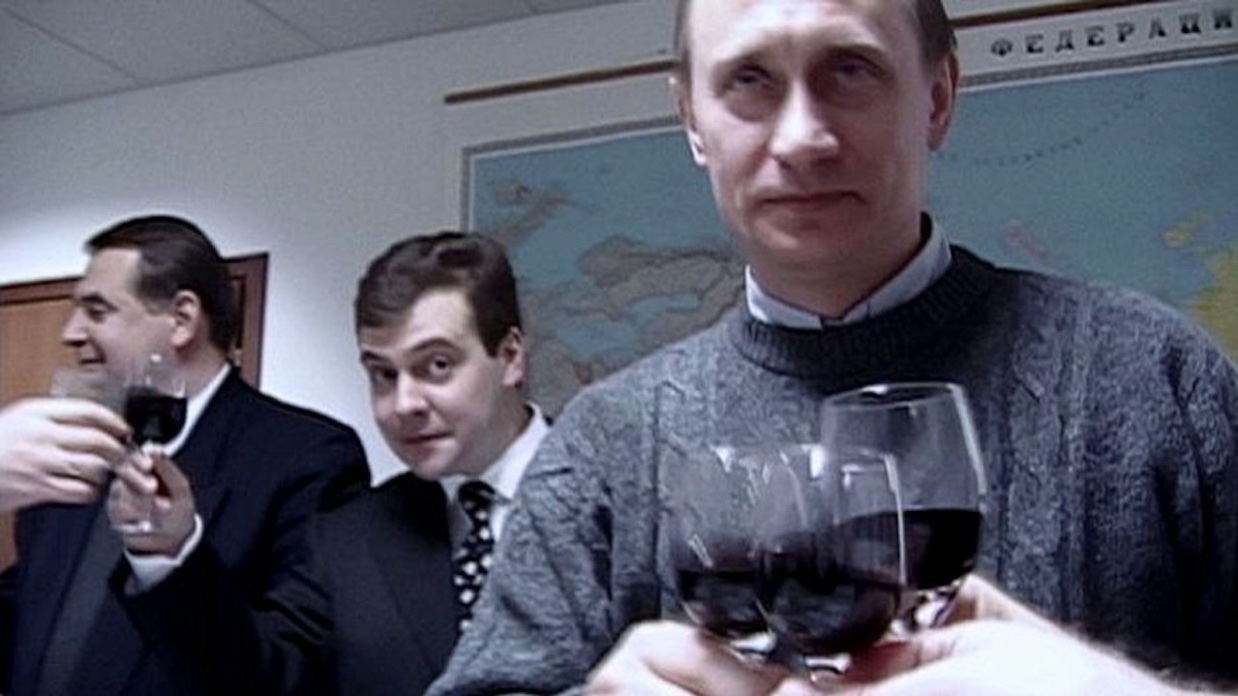 If there was one theme that dominated the landscape on the doc fest circuit this year it was politics — and not just that of the Trump administration or the Kremlin (though those subjects were well represented). Filmmakers around the globe seemed to be in obsessive pursuit, trying to find some rational explanations for the irrational hell that’s been going on. Which means that as bad as the decline of western civilization might seem in our current time, there is one upside — it makes for some stunning cinematic art. So with that in mind I’d like to give a shout to a trio of must-see character studies, portraits of men in power that both chilled me to the bone and opened my eyes to the bigger picture.

Putin’s Witnesses:
Timing is everything. Vitaly Mansky is still probably best known on these shores for 2015’s Under the Sun, in which he managed to gain access to a family in North Korea for a year in order to paint a picture quite at odds with what the dictatorship had in mind. (Though after Mads Brügger’s 2009 The Red Chapel it’s a wonder the Kims never figured out that foreign filmmakers are adept at dodging propaganda. And that goes double for a guy like Mansky who grew up in the USSR.) And now the Russian director, who is of Ukrainian Jewish descent, has created a second portrait quite at odds with what the dictatorship had in mind. In this case one of Vladimir Putin at a crucial point in his life.

What makes Putin’s Witnesses so remarkable is that Mansky actually had intimate access to the Russian President at the very beginning of his leadership, when Yeltsin passed the baton to the political unknown — and Mansky happened to be the head of documentaries for Russian national television. Drawing from his home movie-style archive, the Russian expat (who now lives in Latvia) is able to craft a surprising time capsule, one in which today’s evil emperor comes across as having no clothes. For the most striking aspect of this younger Putin is his awkwardness, his utter discomfort with being in the spotlight. One of the most telling scenes involves a staged visit to his favorite teacher’s small, Soviet drab apartment. Mansky’s camera follows Putin as he enters, then pans to the winter coat he’s dropped in a corner rather than hang up. Is this really the Machiavellian genius the West seems to think he is?

Indeed, the one big takeaway, as journalist Masha Gessen and quite a number of Russian dissidents have consistently pointed out, is that Putin is more craven opportunist than brilliant tactician. When the rising autocrat expresses horror and disbelief to Mansky’s lens about the first in a series of apartment bombings — that later spawned rumors that it was an FSB plan he’d hatched to increase his poll numbers and cement his power — I believe him. Which doesn’t mean he didn’t ultimately see the terrorist act as a strategic advantage. In fact, that brutal incident may have been the quintessential moment Putin realized that keeping tensions high with Chechnya (and later with Ukraine, and with the West) could be a means to an end. Unlike our wannabe dictator-in-chief, Putin’s a hardcore true believer in actual values — in this case Soviet ones. Which is even scarier.

The Trial of Ratko Mladić:
A coproduction from BBC Storyville and Frontline, Henry Singer and Rob Miller’s blow-by-blow account of The Hague trial of “The Butcher of Bosnia” — the last case of the biggest war crimes tribunal since Nuremberg — makes for riveting courtroom drama, to say the least. But beyond the headlines is a complicated backstory that the co-directors deftly tease to light. This includes the crucial reminder that Yugoslavia only devolved into ethnic rivalries after strongman Tito’s death. (Not unlike what happened in Iraq post Saddam.) Which in turn gives disturbing credence to the Putinesque POV that a dictatorship is more desirable than chaos.

Enter the Bosnian Serb General Ratko Mladić to serve as a lens through which we see the opposing sides of the Yugoslav Wars. Alternated with cinematic shots on the contested land, the filmmakers cut behind the scenes of both prosecution and defense — as well as spend time with the conflict’s innocent victims. And unfortunately for Mladić, the Butcher was not camera shy. (Both the filmmakers and prosecutors had a wealth of archival news footage to draw from.)

But what’s ultimately so unnerving is that the man responsible for the Siege of Sarajevo and the Srebrenica massacre — not to mention convicted of crimes against humanity and genocide — is steadfast in his belief that he did nothing wrong. (As is his family, his legal team, and quite a number of his fellow Serbs.) And he can make that case because what happened in Yugoslavia was a series of dirty wars, one in which nearly no one abided by the Geneva Conventions. Thugs, irregular soldiers, militias committing mass atrocities were the norm. And viewed in that light, The Butcher of Bosnia was just an everyday foreman — who happened to be in charge of the largest slaughterhouse.

The Waldheim Waltz:
With its arresting opening — a jazz score over titles before a cut to B&W archival images shot by the filmmaker herself — Ruth Beckermann’s engaging doc immediately sweeps us back in time to 1986. That was when Kurt Waldheim, former UN Secretary General, started campaigning for the Austrian presidency. But this oft-praised man, who painted himself as a moral force, had a shady and mysterious past. (Made all the more cinematic by Beckermann’s alternating between grey footage and intense colors.)

For right before that Austrian election a magazine dropped the bombshell of Waldheim’s membership in the Nazi party, and specifically his role in a military unit that had deported Greek Jews. Which leads the deep-diving director to wonder why on earth it took so long for this news to be revealed. (Indeed. After Waldheim’s long career as a politician and two terms as UN Secretary General — a so-called “champion of human rights” — one has to ask, doesn’t anyone at the UN do background checks?)

Perhaps not so surprisingly, Waldheim feistily responds with what we now consider Trump talk: calling the allegations a smear campaign, fake news, even hinting at a global (Jewish) conspiracy. In voiceover Beckermann notes that up until the election no one had ever bothered to look into Waldheim’s past. The story that he was simply drafted by the Germans, served for a short period of time, was wounded and discharged — all aspects accepted at face value. And yet there had always been glaring signs that this history had been rewritten. Cut to footage of Waldheim during a solemn ceremony at Auschwitz — where he refuses to cover his head even as every man around him has donned yarmulkes.

An investigation by the World Jewish Congress then unearths another stunner — that Waldheim served closely with a convicted war criminal, a man who was hanged in 1947. (And later honored in Austria with a plaque that wasn’t removed until 2015.) Which is when the story of Waldheim reaches far beyond one mortal man, to an entire society that in many ways felt the Nazis got a raw deal. Shrewdly, Waldheim categorically and consistently denies the charges, casting himself and the many who died fighting in WWII as victims. Predating Charlottesville by decades, he even chillingly notes that there were “casualties on both sides.”

Which only adds fuel to the whataboutism fire, as Austrian politicians backing Waldheim double down, refusing to be forced into “collective guilt” by the foreign conspiracy (i.e., the World Jewish Congress). There’s a phenomenal scene during a US congressional committee hearing when California Congressman Tom Lantos — a Hungarian refugee who himself experienced the atrocities of the war firsthand — takes Waldheim’s son, who is coolly defending his father, to task. (That he does so calmly and with utmost respect by simply dismantling every single one of the son’s exculpatory explanations like a deft prosecutor is something our incoming Democratic House would do well to learn from.)

And yet, it’s necessary to note that the Allies are in part to blame for Waldheim’s rise. With communism as the new post-war threat it had just been more important to “integrate” former Nazis into a democratic system rather than punish them. Germany was the only nation to truly take responsibility for the Holocaust — it had to. Other countries, like Austria and Poland, could continue to play victim at the hands of an aggressive Deutschland. Never having to face up to their culpability in a genocide, Waldheim’s countrymen became captive to this specific societal mindset.

Indeed, right before the election Austrians are seen on camera defending Hitler for bringing employment, and blaming the Jews (who rule the world). “Does the past determine the present or does the present choose a useful past?” Beckermann ponders in voiceover. And yet there is also a strong-willed segment of the Austrian population who demand Waldheim step down and are sick and tired of their nation’s obsession with denial. Waldheim’s line that “as tragic as the Holocaust was we can’t forget that Austrians suffered under the Nazi regime, too,” just doesn’t cut it for this younger generation. As one protestor puts it, those in power in Austria “love the 6 million dead Jews” – but the ones that are alive need to be silenced. Victimhood can never substitute for accountability. Another lesson we still haven’t collectively learned.