Tips on Driving to Park City (Especially in a Government Shutdown) 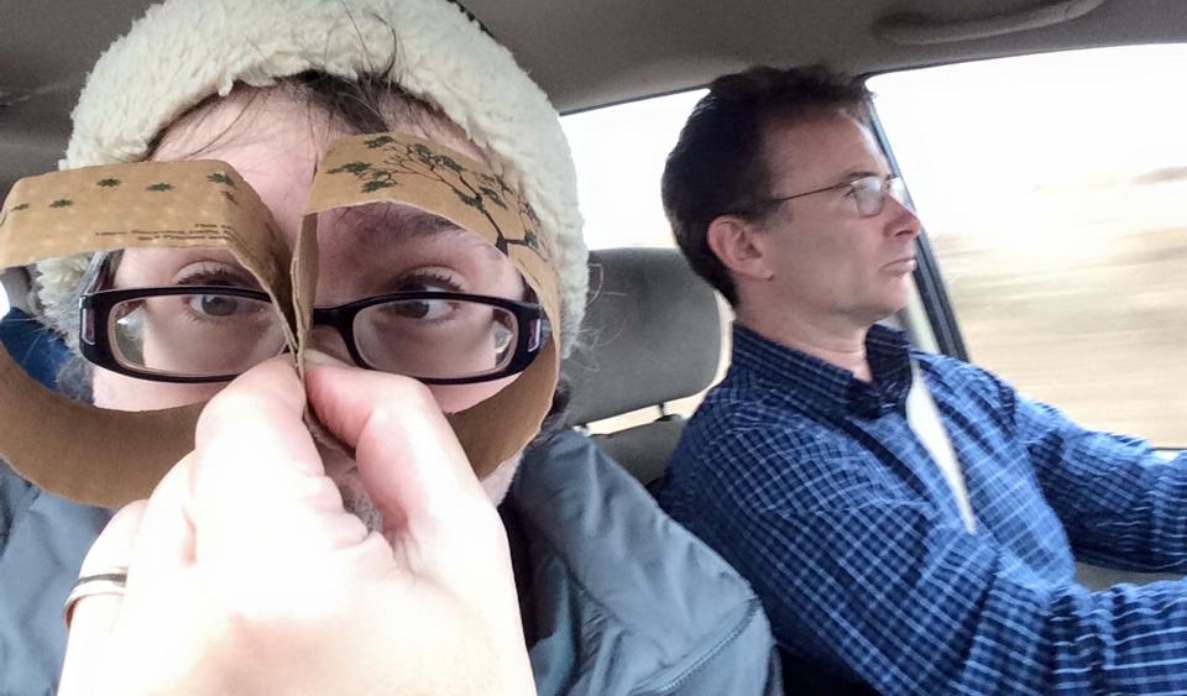 Dan Mirvish and Paul Rachman on the road to Park City

With the government shutdown lingering indefinitely, there are some concerns that furloughed safety inspectors, moonlighting TSA agents and “sick” air traffic controllers are impacting the safety of air travel. If you’d been planning on flying to Park City in late January for Sundance, Slamdance or the Art House Convergence, and you’re concerned, you might want to think about driving there instead.

If you live anywhere west of the Mississippi, driving is definitely a solid option. One advantage to driving is that when you get to Park City, you’ll have a car. Perfect for going to screenings, parties, Staples, Walmart, etc! One disadvantage? You’ll have a car! And you will have to deal with parking, snow, ice and giving people rides. Of course, if you’re an Uber or Lyft driver in your home city, it would behoove you to bring your car and work as a driver for hire in Park City. Every rider is a potential distributor, agent, actor or producer! And with the money you make (almost any time of day seems to have surge pricing), you might even be able to afford a couch to sleep on. Even if you’re not “officially” a rideshare driver, you will become one whether you like it or not.

So if you do decide to drive, it’s not a bad idea to carpool and/or convoy with other drivers. It’s a road trip, so have fun! For example, from Los Angeles, it’s a 12-16 hour drive, depending on the weather, and if you get stuck in Vegas. I drive from LA every year in my Toyota minivan packed with Slamdancers and Sundancers and it can be a rolling film festival. Usually I go with fellow Slam/Sundancers Paul Rachman and Karin Hayes, and often with Oscar-nominee Adrian Belic. But we try to mix it up, mainly so we can tell all our old stories to someone new each year. Sometimes we’ll convoy with one or two other cars, too. (One year, we briefly met up with America Ferrera and Chelsea Clinton at a bar on Fremont Street, and had to spend the night at a cheap motel in Mesquite, Nevada… but that’s another story.) 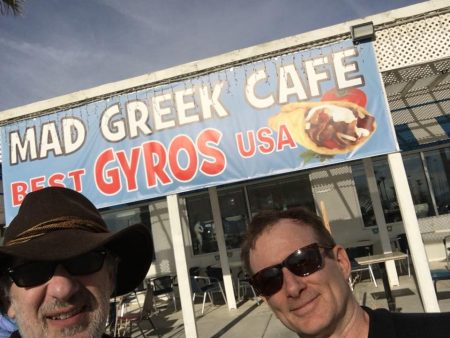 Dan Mirvish and Paul Rachman at the Mad Greek

If you want to muscle through in one day from LA, the trick is to leave by 8am to avoid downtown traffic. When you head north on I-15, highlights include the scenic and windy (both pronunciations) Cajon pass, outlet malls near Barstow, and the world’s tallest thermometer in Baker, California. Try to forge ahead to have lunch in Primm, Nevada, on the state line, just past the massive solar farm. The Mad Greek Cafe is fast, but salty. The Original Pancake House is good, but slow. Call ahead if you want the yummy Apple Pancake, which takes an extra 20 minutes to make. Bonus? It’s in the casino, so it’s perfect if you still need finishing funds for your film. And if you’ve really got time on your hands, the casino buffet is… well, at least faster than the ones in Vegas.

That puts you driving through Vegas midday, which is the best way to avoid traffic. Even a “short” stop on the Strip or at In-N-Out Burger just off Tropicana Avenue could set you back an extra hour. And forget about getting stuck in a casino. You may as well go a day early and spend a night in Vegas if you plan to gamble seriously. 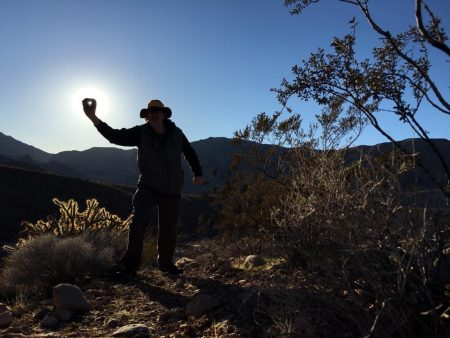 Just a couple hours northeast of Vegas is the bizarre 30-mile stretch of I-15 that winds through a beautiful corner of polygamy — curious Northwest Arizona. We always pull off the road in the middle of this section, in the heart of the Virgin River Canyon. We usually go to one of the campgrounds just south of the highway. If you time it right either direction, you’ll get there around sundown and it’s gorgeous. Stretch your legs and go for a short hike down to the river. If you’re trying out, or showing off, a new camera or lens, this is the place to take some amazing pictures, shoot an album cover or film a Kickstarter video. And if you’re traveling with potential investors or film critics, this is the perfect place to shake them down and threaten to abandon them if they don’t cough up finishing funds and/or give you a good review.

There are decent indoor restrooms there, but because the area is run by the Bureau of Land Management, they may not be picking up trash during the federal shutdown. But even if it’s closed, there will still be plenty of places to hike and pee.

Heading into Utah, you’ll get some beautiful views of the red rocks near St. George. (If it looks familiar, it’s because High School Musical 2 was filmed here. Go Wildcats!) Of course, if you’ve got an extra day or two, this is where you’d head off the main highway and go to Zion or Bryce Canyon National Parks. But again, with the shutdown, this might not be the best year to visit them.

The highway north of St. George has some stunning scenery, but as one Utah Highway Patrolman told me after he pulled me over for speeding down one of the endless hills (“Shazam! Do you know how fast you were going?”), the snowy weather can do a number on the highway: “It gets a little skiffy up ahead.” There are definitely years when blinding blizzards can slow interstate traffic to a crawl. Twenty-five years ago, in our first year of Slamdance, cofounder Shane Kuhn and I had to bivouac in a Provo motel for the night.

We’ve never needed chains on the interstate, but they’re a good idea to have handy in Park City itself. Be sure your windshield wipers are in good shape and that your washer fluid is rated for well below freezing. Sub-zero washer fluid is surprisingly tough to find in LA — you may have to wait til you hit a truck stop on I-15 to get the good stuff. 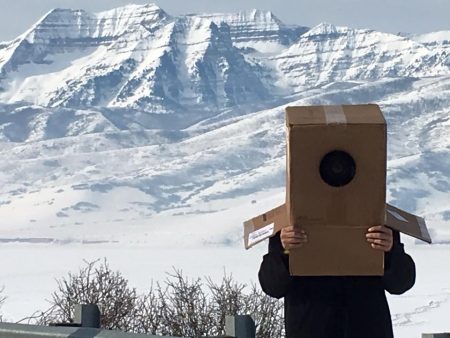 Beaver, Utah, has some decent dinner options, as well as being a plentiful source for juvenile giggles. (“Beaver….Heh, heh.”) Think about venturing into town, between the two Interstate exits, and stopping at Arshels Cafe for an authentic Utah diner experience (Honey-Pecan Chicken & Shrimp is probably the closest you get to a vegan meal here). And if you really want film-cred bragging rights when you arrive in Park City, then buy the 1937-built, 300-seat single-screen Main Street Theatre in Beaver when you drive through there!

Of course, if you’ve got more time to kill either there or back, you can take routes far more scenic. But make sure you’ve got some real AAA paper maps with you. One year, we lost all cell service and almost wound up in a dinosaur graveyard in Colorado. Even if you want to add a little scenic detour, consider the route to Park City through Heber (via route 189 through Provo), rather than through Salt Lake City. If it’s daylight and the roads are in good shape, it’s much prettier than the SLC route and almost as fast. There’s some great coffee shops and thrift stores in Heber, and the only place to find Tex-Czech Kolaches in Utah are at Dotties. Of course, there’s also the picturesque circa-1962 Holiday Lanes bowling alley, too, which has an old-school diner inside that can’t be beat!

Finally, if you do have a car in Park City, bring two sets of keys. One year, filmmaker Tom Quinn, who was staying in my condo “accidentally” flew back to Philadelphia with my car keys in his pocket. The good news? Four years later he came back to Slamdance as a director and won our grand jury prize (it was the only way I could get him to return the keys).

Filmmaker Dan Mirvish is the cofounder of the Slamdance Film Festival which is celebrating its 25th year in 2019. He’s the author of The Cheerful Subversive’s Guide to Independent Filmmaking. And Dan’s award-winning film Bernard and Huey just became available on Amazon Prime.