Wrapping Their 25th Year, Slamdance Co-Founders Discuss the Festival’s Past, Present and Future 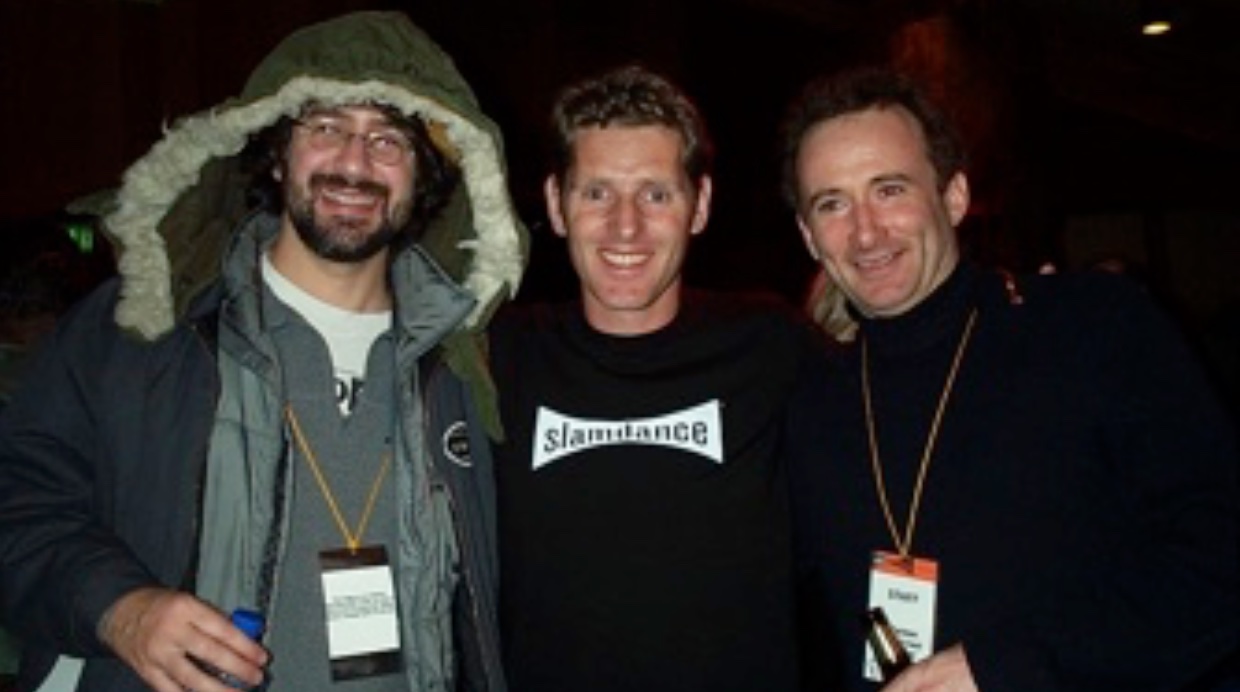 Dan Mirvish, Peter Baxter and Paul Rachman at Slamdance in 2010

“In a way, I see the festival as run like a punk rock label — a successful one!” says filmmaker and Slamdance “co-conspirator” Paul Rachman. With its award ceremony and final screenings, the Slamdance Film Festival concluded its 25th year last night (read the full list of winners here) — an astonishing fact of longevity that none of its founders could have predicted when they launched the outsider event in Park City back in 1995.

“We were a wild bunch of filmmakers who got together to do something different,” says co-founder Peter Baxter. “And we’re realizing now how naive we were back then — and how lucky we were to be that naive. If we had known then what we know now, we might not have continued Slamdance. Fortunately, we had all of us to support each other.”

Of Slamdance’s history, filmmaker Dan Mirvish, who, along with Baxter, Shane Kuhn and Jon Fitzgerald co-founded the festival, says, “Like any 25-year-old organization, we have had our ups and downs, behind-the-scenes dramas, and organizational and economic challenges as the economy has gone up and down and other festivals have come and gone. But we always come back to why it is we are doing this, and what our purpose is, [and ask] does it still make sense? And [we conclude], yes, we should still keep doing this, and in more or less the same way.”

Twenty-five-year anniversaries can be challenges, events prone to excess nostalgia, but Slamdance’s has been one of, says Mirvish, “business as usual, which is in a way keeping with [our mission] of first-time filmmakers and low budgets. That’s the mantra that has led to our longevity. A little nod, though, is showing Steven Soderbergh’s new film [High-Flying Bird] — he’s been such a big part of our history.”

Soderbergh received this year the Slamdance Founder’s Award, which previously went to festival alumni the Russo Brothers and Christopher Nolan. Other returning alumni this year included jury members Jeremiah Zagar and Lynn Shelton. Says Rachman, “That was our approach — joining the past to the present and the future, and bringing back the family from a historical perspective.”

Venturing down memory lane, all of the Slamdance heads I talked to all referenced the challenges of Slamdance’s first year in 1995, which began after three of the founders had their films rejected from Sundance. Also, reported Noah Cowan — then a programmer at the Toronto Film Festival and now the Executive Director of the San Francisco Film Society — in Filmmaker, the Slamdance founders were spurred on by a quote from producer’s rep John Pierson about the IFP’s Independent Feature Film Market and relayed in the New Yorker. Pierson said to a young filmmaker at the IFFM, “If some percentage of people in their twenties who want to make an independent movie would build some infrastructure, that would help.” As Cowan noted, “the cowed filmmaker was none other than [Slamdance co-founder] Fitzgerald.”

That first year saw flyers placed all over Park City proclaiming, “The first annual guerrilla international film festival.” The films selected — including the microbudget God Drives a Pontiac as well as a Mimi Rogers/Billy Zane-starrer Reflections on a Crime — were drawn from submissions following a front-page Variety article just weeks earlier announcing the festival. Films screened in Salt Lake City at the University of Utah campus and were free for Sundance badgeholders and $3 for others. Additional showings were added at the Yarrow and Prospector hotels — both now Sundance venues.

“We had no idea that we would even make it through the 1995 edition,” says Baxter. “The Park City police said our days were numbered,” adds Mirvish. “When we first started, Sundance had a lot of influence over the city of Park City, and Sheriff Bell tried to run us out of town. By the third year, we had run into this young hip couple who ran the Treasue Mountain Inn” — the Slamdance festival’s longtime homebase — “and he took us in. And now, years later, the guy from that couple, Andy Beerman, is the mayor of Park City and our best friend. He brings council members to our events.”

Indeed, engagement with the local community has been a Slamdance priority. “We have discounts for locals,” says Mirvish, “and we have made a point to show student films by Brigham Young University students. One of those films was Jared Harris’s short, Palooka. At his Q&A there were two producers who told him, ‘We love your short, do you have a feature?’ And he was ready with the script for Napoleon Dynamite in six months.”

But while in the early days, Mirvish says, “Sundance tried to run us out of every venue,” Baxter says a more amorphous force has been the biggest challenge to Slamdance in recent years. “Our biggest battles have been with celebrity culture,” he says. “How difficult it has been to compete with celebrity and corporations and media outlets that were besotted by celebrity culture that financed events around that. Slamdance hasn’t done that. We have dug in.”

Other stories from Slamdance’s history include Christopher Nolan walking into the first screening of his debut microbudget feature, Following, in 1999 and finding only 14 people in the audience. The film had been picked up by Zeitgeist Films, and Nolan and producer Emma Thomas had assumed they’d be promoting — and, as Mirvish says, “vice versa.” “We told him, ‘Go down to Kinkos, make some flyers and pass them out! Don’t be shy!’ And he did and got people into his second screening, which Roger Ebert and Elvis Mitchell came to. And his career has done okay ever since.”

Rachman recalls other Slamdance memories, like the time Soderbergh first showed up at the festival with Greg Mottola’s The Daytrippers, which he produced. “It was the year we were using these portable 35mm projectors, and every couple of screenings they would fail. Soderbergh was on the floor fixing the projector himself, and afterwards he said, ‘I’ll be back next year.’ And he showed up then with Schizopolis.” And then there were the two years — 2001 and 2002 — that Slamdance moved to the Silver Mine, which coincided with even more festivals (Lapdance, Nodance) crowding Park City and parties fueled by the dotcom craze.

“We had tried to expand the festival, but it was a trek up there, and it kind of stopped working after the second year,” says Rachman. “But that was the year Bong Joon-ho had come to the festival with Barking Dogs. It was his first time in America, and he had a blast.” And all of the founders cite LeAnn Rimes attending the premiere of Jordan Brady’s Dill Scallion in 1999. “We had two fire alarms go off in the screening, which has never happened before,” says Mirvish. “LeAnn sat frozen still, as if she was made up of asbestos, while everyone cleared out. At the end of the screening, Jordan introduced her, and without a word of intro she belted out ‘Amazing Grace’ and blew the room away. And then sat down.”

Baxter breaks down both the history and identity of Slamdance into three parts. There was the first year, the origin story, so to speak. Then there were the years following, “when we realized that we wanted to continue doing this.” And finally there’s Slamdance in its current iteration, which is not just a festival but a community serviced by a year-round organization based in a Los Angeles office and staffed full-time by Baxter and a small team. “This artist-led community that we have created — we have done this on our own terms,” he says. “And some of our better-known alumni are really going to be part of the development of our future. There’s the Russo Fellowship, where they are giving a filmmaker a $25,000 prize and mentorship.” Yassmina Karajah’s 2018 Slamdance short, Rupture, for example, is being being turned into a feature film with their help.”

There’s also the Slamdance Screenplay Competition, which, Mirvish notes, “is one of the more respected ones out there, and is one of the first to give coverage back to the writers. That’s now almost a standard thing.”

The Slamdance founders are all keen to note the box-office returns of some of its alumni directors — “Between the Russo Brothers, Christopher Nolan and Rian Johnson [Marvel, DC and Star Wars, respectively], it’s not a stretch to call Slamdance ‘the birthplace of the masters of the universe!” says Mirvish. But this proclamation folds into part of a larger point about careers and longevity. Says Mirvish, “We recognized very early that most of our films are not going to get picked up, certainly not at the festival, although there have been dozens of cases over the years. We measure success by where the careers have gone for these directors.” Adds Baxter, referencing not just the festival but the year-round programs, “Slamdance had to start getting involved in nurturing talent whole heartedly and passionately because the industry doesn’t invest in developing new talent over a longer period of time.”

Would Slamdance ever consider moving away from Park City and to another spot in the calendar where there’d be less competition for viewers and easier access to larger screening facilities? Says Rachman, “Every year at Park City gets more expensive, but we feel that our energy and our raison d’etre is there — we’re part of the ecosystem. So it’s been discussed, but we’ve never gone beyond thinking about it. We have always come back to Park City.”