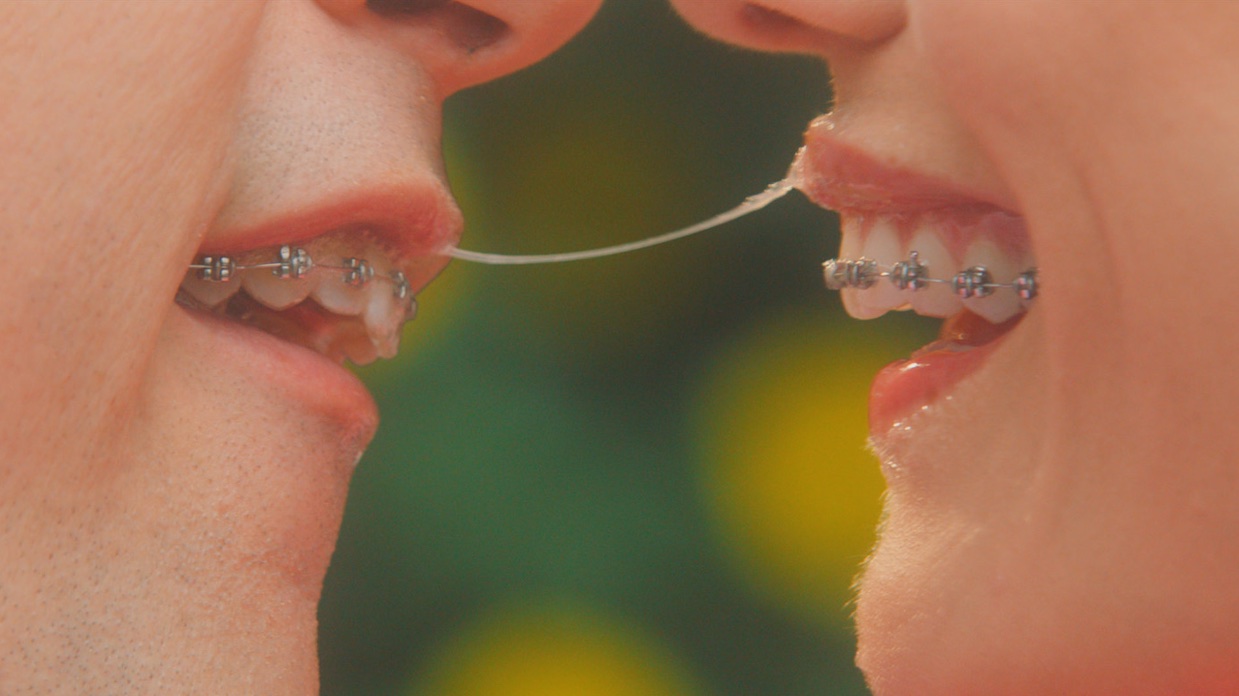 I know we’re in high elevation here at Sundance but it still freaks me out when I go to buy coffee and also have the option of buying a small personal oxygen tank. It makes me feel like we’re preparing for some kind of apocalypse, when, in fact, people are only preparing to ski and watch movies. The altitude is tiring though, I slept so deeply the other night that I missed whatever fun my roommates had, which, judging by the drying swimsuits and empty Corona case, was plenty. There are 14 people in my condo on the outskirts of Park City in an area called Deer Valley. I still haven’t met three out of the four other people sleeping in my room. Sundance housing can be a bit like early NYC Craigslist full of strangers, shady deals and crawlspaces advertised as bedrooms.

The Lodge
Midnight
Veronika Franz and Severin Fiala / 2018, 108mins. / USA,UK
In attempts to force a bond with soon to be stepmother Grace, young Aiden and Mia spend Christmas with her in their family’s wintry, isolated cabin. If horror movies have taught me anything: nothing good comes from going to a wintry, isolated cabin. As their attempts to push Grace out of the family portrait escalate, a slow unraveling begins. Plot twists and jump–inducing turns keep one wondering where things will go as the film darts around the heavy wooden interiors and placid, remote exteriors with measured insanity. Riley Keough transforms into Grace, who lives in a tangle of cult-induced PTSD. Keough’s performance is full of a restless dispassion that truly shows her range and potential as a performer. The moments of shock almost make up for the sluggish pacing and familiar tropes (dollhouses, cabins, cults). An appearance by Alicia Silverstone made me realize how much I’ve missed her pert presence onscreen.

An unassuming older woman with lightly dangling pink earrings whispers to no one in particular on the bus, “I have tickets to a lot of things if you need them.” Sundance turns grandmas into ticket scalpers. Hours later, a woman on a nearly empty shuttle negotiated deal terms with a fortitude and eloquence, guiding her client into decisions with quiet, assured strength. It was also fitting that as the latter scene was going down, the bus passed by two intrepid young girls capitalizing on the crowds by selling cookies on a busy residential corner, complete with golden retriever lure. At a panel recently I heard the statistic that only 2.5% of venture capital money went to women in 2018 (a quick search says 2.2% is more likely). Judging by the hustling on display at Sundance this number just feels stupid. Scenes from a bus are a weird and necessary part of Sundance as venues reach out across the area, stacking all kinds of fest-goers into one shared environment. The uptick in Uber and Lyft has resulted in a lot of traffic, hence a lot of time on the bus transforming it into an office, a bed, Stubhub, a cafe, a networking event and so much more.

Queen of Hearts
World Drama
May el-Toukhy / 2019, 128mins. / Denmark
A disorienting opening shot spirals upwards in a forest canopy, swirling one’s equilibrium to prepare for the taut, beautiful, dizzying family drama to follow. Anne is a successful lawyer, mother and wife, thriving in a sleek Scandinavian lifestyle complete with handsome doctor husband and perfectly detailed twins. Her balance of identities and the increasing sense of invisibility that comes with age begin to wear her sense of self. Her delinquent stepson Gustav unexpectedly joins the model family, forcing a palpable friction between Anne and Gustav. The halting tension erodes a sense of trust, which gives way to dissolution. All of Anne’s good qualities slide downward, bleeding into taboo as control falls from her grasp. Trine Dyrholm brings the character of Anne to life with such realism that one begins to fully dwell in her shocking deceptions. (Indeed, there were audience gasps.) An unlikeable, middle-aged, female character is a rare thing to see onscreen, and the resolute fearlessness of Anne’s characterization is a true filmmaking feat in itself.

Two teenage girls wielding autographs after meeting some idol dash down Main St., yelling into cell phones, “Sundance is magic!” through tears of pure pubescent joy, soon followed by a man explaining the rousing fervor to his friend: “It’s the film industry, it’s always extra.” Parties are an inherent part of Sundance, but we all know that most parties here are just work with open bars. The storefronts of Main St. transform into sponsored lounges and fetes, glowing with warm light or strobe lights late into the night, often flowing with free hats, stickers or other branded giveaways (this year I scored a metal straw). At night, the street becomes congested with people wearing clothes that are inappropriate to the weather (some conveniently wasted enough to not feel a thing), heavily bundled professionals, and those that are famous/rich enough to be dropped from door to door by vehicles. A Vimeo happy hour was a nice reprieve from the hectic streets as I caught up with old friends, had terribly awkward conversations with new ones and finally met another one of my bunkmates. Following that, driven by some form of unfortunate early 2000s Brooklyn nostalgia and the promise of good food, I waited in a line for 30 minutes for a Vice event. The line stretched blocks, becoming longer and wider by the minute. Without ever moving, the venue was at capacity. Sunday it was clear that the top of the party hierarchy was with HBO as individuals hummed about their invitations with coy trepidation: “Am I really going? Aren’t you going?”

Koko-di Koko-da
World Drama
Johannes Nyholm / 2019, 86mins. / Denmark, Sweden
I just asked a very lovely bearded Italian man sitting next to me in a lobby to stop singing the title lullaby of this film because it is terrifying. Tom Wolfe’s evil twin, his two fairytale sidekicks and a set of pit bulls descend upon a couple’s campsite, the campers interpersonal woes quickly dissipating in the face of these fantasy torturers. As the film progresses, the agonizing encounter is set on repeat as different versions of the same scene play out, a striking and unrelenting structure. A parallel tale of rabbits and peacocks unfurled alongside, embodied in a wistful puppet show loosely re-telling the couple’s backstory, including the opening family tragedy that evoked this cyclical fate. The aesthetic of the two modes of the film are somewhat at odds with each other in a way that was hard to reconcile, the vivid brutality highlighting the splitting seams. It is the type of work that deals in shock and experimentation as if it is testing an audience’s endurance, spiked with moments of pure genius in form or beauty in frame to keep one sustained — a bit like the sometimes nightmarish experience of life.

Though the ticketing system for New Frontiers felt in transition this year, I was able to catch a panel on volumetric filmmaking and another titled “Breaking the Frame: A New Blueprint for Socially Engaged Media” (Ford Foundation & JustFilms) that fulfilled my curiosity on the subject. Kamal Sinclair, the Director of the New Frontiers Lab Programs, was on both panels. She kept referring to this moment in transmedia as being in need of the “two turntables and a microphone” cataclysm that revolutionized hip-hop: the accessibility of tools will lead to huge creative and cultural shifts from innovators and outsiders. Sinclair so eloquently said that there is a need to “bend technology to justice,” a phrase that exposes the potential for good in this new tech. Reps from Scatter, Vimeo and Emblematic Group spoke on ways in which their companies were working towards more usable resources (i.e. streaming VR platforms, accessible workflow apps). It feels like we’ve been at the crossroads of VR for decades now, but this want of democratizing the media and creating new, inclusive opportunities makes me feel like there is a real chance to move beyond the dull, elitist bubble this genre keeps retreating to.

Greener Grass
Midnight
Jocelyn DeBoer and Dawn Luebbe / 2018, 101mins. / USA
The cinematic equivalent of a razor blade in a piece of Halloween candy, swallowed out of politeness. Or maybe it’s a hot pink Twin Peaks? Never have I seen a film that captures the clawing competition of suburban parenthood with such ferocity, doing so with an eerie deadpan and a multitude of pompoms. It is like the women of Edward Scissorhands and The Stepford Wives fell into a vortex where winners and losers are created hourly in games of exaggerated etiquette and nightmarish paint your own pottery. Jill gifts her newborn to Lisa. Lisa births a soccer ball named Twilson (“We couldn’t name him Wilson. Wilson was Tom Hank’s baby’s name.”) Jill’s husband drinks his obsessively clean pool water by the jug. Everyone wears braces. This is just a handful of ongoing weird that flatly presents itself in this skewed universe shining with brightly colored sickness from the twisted conceptual minds of Jocelyn DeBoer and Dawn Luebbe, the film’s writers, directors and stars. Though pacing isn’t exactly even, the film is an oddity whose inside joke potential and very specific references will no doubt find an audience. It is nearly impossible to convey the timing/tone of the film which alone makes it deserving of a distributor but, if it doesn’t find one, it will no doubt amass an equally as deserved cult following.

For every person at Sundance there is a different experience. The glamorous images of red carpets and stardom that emanate in the media are real but exclusive. Industry people are herded into lines like cattle in heated white party tents. Townspeople just want to be able to go grocery shopping without three theater venues in the way. But it is the intersection of experiences — especially the moments of unguarded star power — that are what make this fest an equalizing wonder of indie spirit. As I treated myself to a watery Indian meal of spinach and cheese cubes my own personal idol, Desiree Ahkavan, sat alone at a table waiting for someone to join. Ahkavan is a comic genius and immutable force who I’ve followed since her early web series days. Seeing the creator of work that has resonated so deeply with me, knowing that for a moment we are both regulated to the same grossly flat soda, made me feel truly part of a larger movie-watching/making real world for a brief sparkly moment and made me think of all the potential of each unknown filmmaker sitting among us. Then I picked a bunch of cumin seeds out of my teeth.