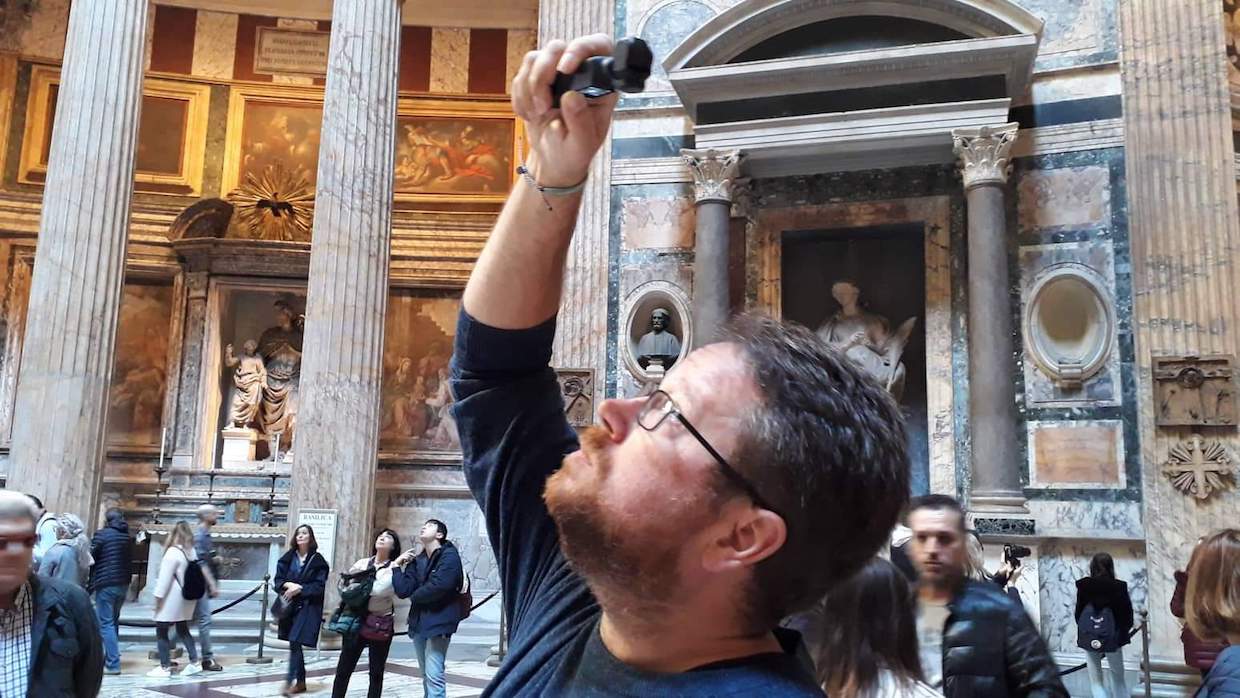 The Osmo Pocket in action

The notion of the camera-stylo, introduced by Alexandre Astruc in 1948, had a very circumscribed meaning: “the cinema will gradually break free from the tyranny of what is visual, from the image for its own sake, from the immediate and concrete demands of the narrative, to become a means of writing just as flexible and subtle as written language.” Quickly, though, the metaphor of camera as pen took on its own life: the French New Wave used it to propel auteur theory, while others used the metaphor in the opposite direction—filmmaking as a giant pen held by a crew, with the director trying to get everyone to coordinate long enough to form a readable letter.

I’ve always been drawn to this metaphor in a more quotidian way. Even though most writers type these days, the simplicity of the pen is unimpeachable, an unattainable ideal for filmmakers. The notion of frictionless boundaries between creativity and implementation is embodied in a creative tool you can fit in your pocket. A pen? Easy. A film production unit? Historically speaking, no way. All that’s changed to some degree in the cellphone era, as we reach the tail end of the notion of “shot on iPhone” even being a selling point. However, said films often use the phone simply as a capture device, rigging it with frames and lenses to the point where it wouldn’t fit in a backpack, much less a pocket. And even if you’re content with the onboard stabilisation on a phone, there’s a fiddly ergonomics to the whole practice. Ditto the GoPro—while you can buy external gimbals, such as the one we used in this documentary, there’s a cumbersome quality to the setup that keeps it from being a true camera-stylo.

Not everyone gives a shit about this—most people would rather shoot on an Alexa—but I was besotted by the Osmo Pocket when it was announced. For those that haven’t been paying attention, Osmo is DJI’s gimbal brand, used for both phone-mount kits and stand-alone cameras. I’ve had a few friends play with the original stand-alone Osmo, and I’d been impressed by the footage, but it was a bit bulky for everyday use.

The Osmo Pocket promised more with less. Here is a camera that can fit in your pocket (122 mm, 116 grams), containing a powerful 3-axis gimbal for mechanical stabilisation, providing 1080p and 4k options along with timelapse and still photo settings, and, of course, slow motion (promised to 120 fps at 1080p, although only available at 60 fps out of the box), optimised to be held in your hand. What’s not to like?

Setting the bloody thing up, for starters. You’ll need to connect it to your smartphone to register and, at least on my Android phone, the USB-C connector is fiddly as all getout, dropping out with maddening frequency. It could be a phone-specific problem, but nonetheless, the lack of a wireless connectivity option in-box (you can buy it as an accessory, although it wasn’t available til a month after ship date) was infuriating. The random screen that popped up on my smartphone in an Asian language during registration added to the feeling that the product launch wasn’t wholly baked, and I’m still struggling to update the firmware. (I’d been hoping that the recently released wireless module would fix my woes on this front, but apparently it’s only compatible with a limited number of phones, of which my LG G5 is not one.)

Thankfully, once I put my phone aside and got my hands dirty, my satisfaction went through the roof. The minimalist design: apart from the camera and handle, there’s merely two buttons, a USB-C charging port, a micro SD slot and a hidden panel where the phone connectors attach. Oh, and of course, a display, which measures less than a square inch. (The form factor of this thing is nuts: it fits fully nestled in my fingers, with the camera head poking out.) By swiping the display, you can access various touch menus, and while the control options are limited—you’re stuck with auto exposure, no ISO control and limited options for frame rate—they’re enough to get you started playing.

And I think play is the mindset with which you have to approach the Osmo Pocket. I can’t hope to compete with some of the more detailed technical reviews that have already hit the web, and while I can attest to some of the weaknesses they flag—relatively limited dynamic range in mixed lighting environments is the biggest—I kind of feel they’re missing the point. Sure, you can use this camera in manual mode and carefully set exposure and architect complicated shots. Or, you can just carry it in your pocket; when you see something you want to shoot, five seconds later, you’re rolling.

This divide is usually expressed as the distinction between “consumer” and “professional,” but there’s more than one way to slice a cake. Are films like Another Girl Another Planet, Voyage of Time: Life’s Journey, Tangerine or Inland Empire “consumer” or “professional” because they use gear (in part or in whole) that serious camera geeks would scoff at? In my filmmaking worldview, there’s gear that expands your creativity and gear that doesn’t. There’s no question that there are certain professional situations where its 4:2:0 colour space limitation, H.264-only recording format and lack of external audio inputs would all prove problematic, but that’s not the space I’m working in.

Of course, just because it’s something you can play with doesn’t mean it’s simple. While I grasp the distinction between the gimbal modes of tilt lock (holding the horizon constant in frame), follow (moving up and down but holding the y-axis constant) and FPV (basically a controlled free follow, allowing the horizon to go diagonal with your hand motion) and between slow follow and fast follow (I mean, you’ve probably already guessed that one), finding the best mode for any given circumstance is still a bit of trial and error for me. I’m often convinced I’m shooting gold—partially because of the small display, partially because I’m splitting attention between a distant monitor, a subject and how I’m moving—but my footage often surprises me in post with the unpredictable slight reframings characteristic of gimbal usage. (Others have noted issues with the constant auto-focus; that hasn’t been a major issue for me thus far, but may be more a use case scenario than anything else.)

I’ll be interested to see where the Osmo Pocket goes, both in terms of firmware (assuming I finally figure out how to upgrade it)—after all, in 2019, who’s to say what features your camera might have in six months?—and in terms of filmmaker usage. I’ve showed it to documentary filmmakers who would never feel comfortable using a phone that fell instantly in love with its surreptitious quality. There will also be drama feature filmmakers who purchase all the add-on components and push the manual side of the camera to its maximum to get lovingly exposed shots in controlled environments with incredible stabilisation. I don’t expect it to fill that latter role for me, but as I prepare for a five-month trip, I’m expecting that this camera will live in my pocket the entire time as my default go-to. Not bad for US $350. (Yep, I paid for it.)