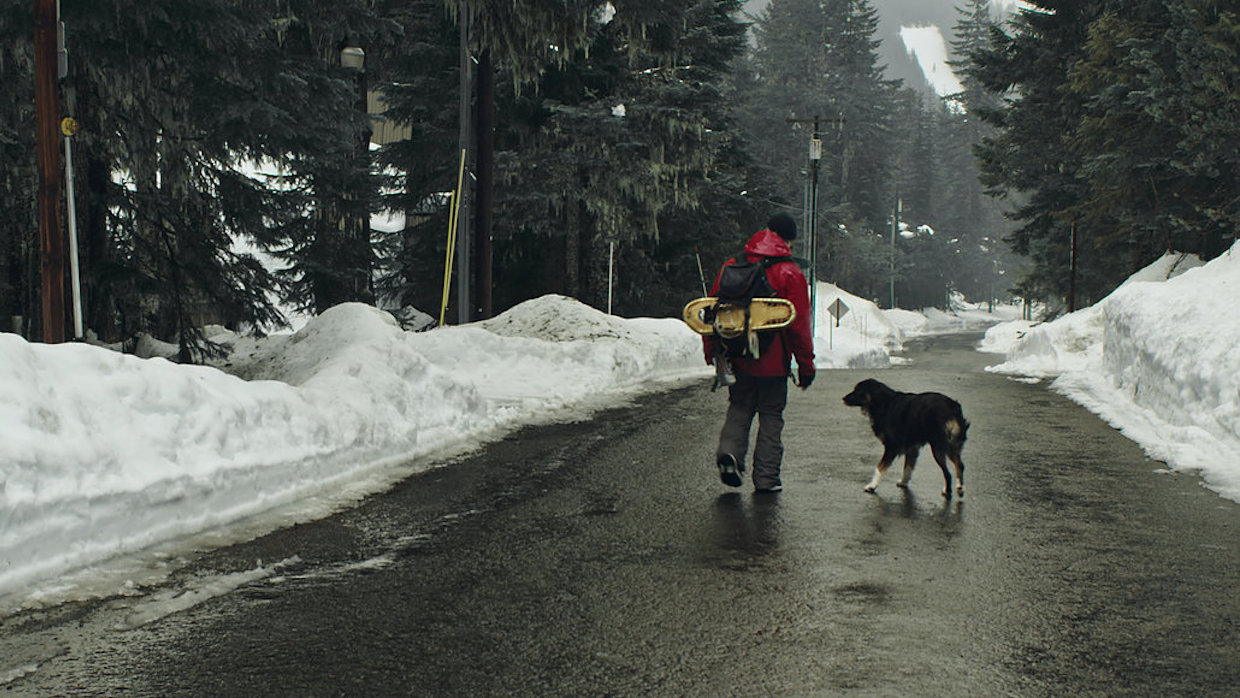 In 2014 I shot a documentary in roughly three weeks. It took place exclusively in the small town of Government Camp, OR, the closest feeder village to the Mt. Hood ski resorts of Timberline, Mt Hood Meadows and Skibowl. I had cast 19-year old Sadie Ford as the lead character. She responded to a flyer I posted at the Govy Market searching for someone who ticked off my boxes: Sadie was a passionate snowboarder (not a pro), planning to live on the mountain full-time for the winter season, and was willing to let me follow her around with a camera. She had saved money from working as a snowboard instructor, spent her days riding at one of the resorts or hiking in the backcountry, and had been sleeping most nights under a tarp in the woods.

She moved the location of her campsite every now and then; I’m not sure whether this was out of boredom, as an experiment to find the best spot, or to keep Forest Service officials off her trail, as it were.

The plan was to film with Sadie as much possible during the three week window I had arranged to take off from my day job. My goal was to portray a character I resonated with strongly, and yet hadn’t ever seen onscreen, with the layered complexity that my own experience as a female snowboarder deserved. I wanted to use her perspective to reflect the posturing, bravado, camaraderie and devotion of the snowboarding culture at the height of the winter season. The film would be equally a celebration and a critique, equally highlighting Sadie’s inner experience and outer world.

We planned to shoot from late February through mid-March on Mt. Hood, expecting the same snowy forested wonderland I had experienced countless times before—the classic winter landscape that had inspired me as a teen and kept me awe-struck, riding and and spending time in the woods well into my thirties.

I was prepared to snowboard, but not super prepared to film in the snow. We maybe purchased some handwarmers. We had a warm condo to sleep in. Our DP, Jerred North, had recently shot a teen snowboard-camp reality show and so was comfortable in the snow and cold, and was an able skier. But for unexplicable reasons he insisted on wearing jeans during our entire shoot. Like me, our producer Janique Robillard was an experienced snowboarder. She and I basically dressed as we would for a day of riding on the mountain. Our rotating cast of ACs had to be competent skier/snowboarders as well.

We showed up on a classic Pacific Northwest gloomy grey day. Likely the air was thick with mist and moisture. We waited for it to snow. It did not. The landscape became less and less white as the snow melted away, revealing brown ground and evermore grey skies. All told we got one good snow dump during the three weeks of filming. It was awful. It was not the landscape of my dreams, or anyone’s dreams. It rained, a lot. It was too warm. The town felt empty and dead—locals tried to make the best of the crummy weather, and businesses closed their doors for days. Tourists stayed far away. Climate change is very, very real, and it was hardcore messing up the fundamental bedrock of our movie. (This is where I shoutout Protect Our Winters, an amazing organization led by the outdoors sports community working to stop climate change).

We filmed anyway. Normal cold-weather challenges like making sure the camera batteries didn’t freeze up were less of an issue, though protecting the camera from moisture seeping in was a constant concern. It was often wrapped up in plastic. What we needed was a giant umbrella, but there was nothing even close to that available for purchase in town. Janique and I had to make a special trip offsite to get one. After many fruitless stops at various outdoor sports stores, finally we scavenged an umbrella from a local golf resort about 15 miles down the mountain—beware the sound of water dropping onto an umbrella creeping into your sound mix! The umbrella was priceless to our shoot.

There was enough snow on the ground, however, to make getting to Sadie’s campsite a formidable challenge. She was staying in the woods about half a mile up a snow-covered mountain. Before leading us there on the first day, she told us we’d need snowshoes. I initially stubbornly ignored this advice, thinking I had neither the time, the budget, or the need. We were wearing regular snow boots, and planning to hand-carry all of our gear, including the heavy Red Epic camera and a very heavy, cumbersome Sachtler tripod. That first day, each step up the mountain was a sinking-into-snow, uphill nightmare, took forever, and required a ton of physical exertion. While Sadie flew up the mountain wearing snowshoes, Jerred and I lagged far behind, exhausted, unbalanced, and worried about dropping/ruining expensive equipment. By the time we reached her campsite spot, it was clear that this travel scenario could not repeat itself. We rented crappy snowshoes from the local mountain adventure store for the next two weeks (they gave us an absurdly great deal), and a long coffin-shaped sled with a looped rope attached to it, meant for parents to haul their children behind them while cross-country skiing. From then on, we snowshoed up the mountain each time. I dragged the sled, which carried the heavy tripod in it, sometimes the camera too. Later we tried to use the sled as some kind of dolly: I’d haul it like a sleddog with Jerred laying down inside, holding the camera. In the end this gave us one usable tracking shot of Sadie’s feet snowshoeing through the snow. Totally worth it.

We had to embrace the rain. It was already late in the season, so there was no sense in waiting for better/snowier weather to arrive (which of course it totally did the moment we left), and due to crew availability there was no flexibility to reschedule the shoot dates anyway. I couldn’t bear to wait for another winter. As any snowboarder would be, Sadie was disappointed about the lack of snowfall, but tried to make the best of it. When the snow did finally arrive, she vanished into its jowls in a flash and became harder to keep track of. Her patience for our camera setups understandably thinned. But with the “free” time afforded by all the rain, we had plenty of opportunity to collaborate and work together. We got a lot more time to film the details of her lifestyle and all of her activities that weren’t snowboarding, which in the end made for a more interesting film and a more complicated character study. The weather became part of the narrative, but it also shaped the texture of our time together.

Snow has a unique ability to offer what we need—whether a shift in perception, a magical sense of wonder, or an invitation to fun and perhaps adventure. For some of us, we feel most ourselves in this container. Where there is snow, there is a clear visual indicator that our inner world is in a state of flux. We’re changing; we’re growing.

With less snow than anticipated, there was a kind of loss that Sadie and I both experienced. For Sadie this loss seemed to be echoed in the unexpected death of a family member during our time filming. But it allowed her contemplative, searching nature to shine through all the clearer. Snow, like life, is not a guarantee. For me, the loss of snow was reflected in an unexpected feeling of grief I experienced on the shoot. I had recently become a new mother, and my identity was shifting too—my days as a carefree snowboarder like Sadie were officially behind me, and I was mourning them. It kind of made sense. It’s funny how a change in the environment can be felt so deeply in our bones. I think ultimately Woodsrider turned out exactly how it was meant to be. Both the process and the final product feel truthful to the human experience.