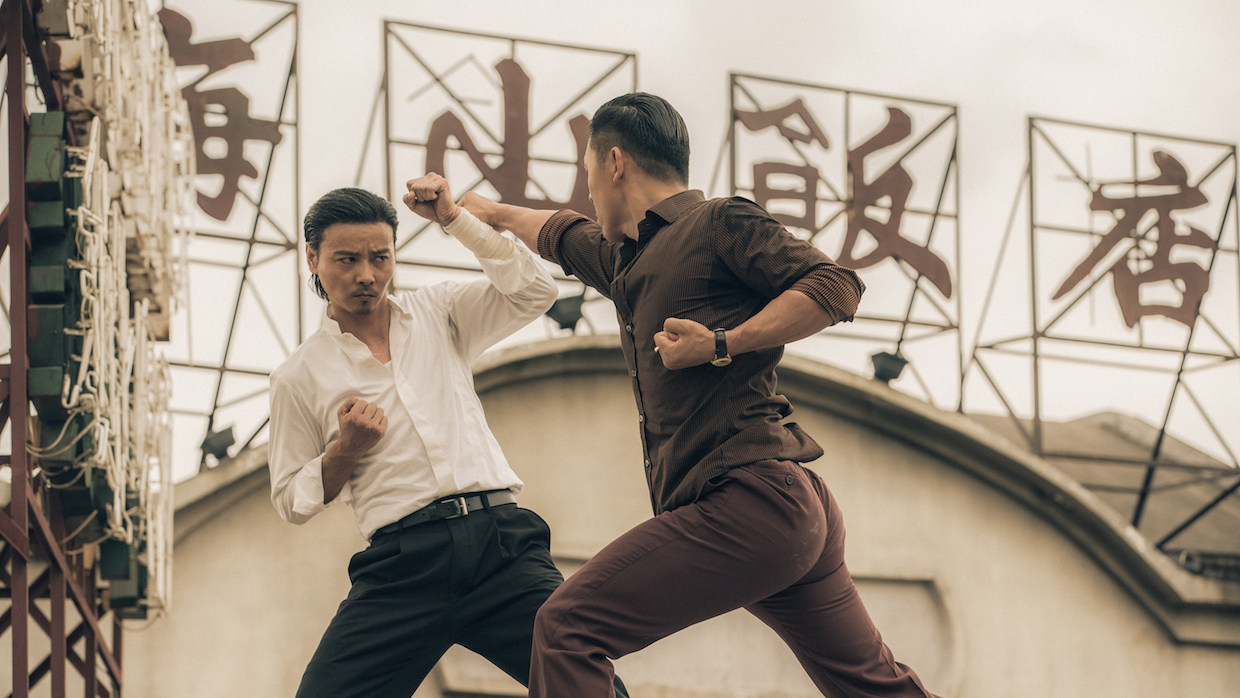 Master Z: The Ip Man Legacy (2019) closes out Yuen Woo-ping’s fifth decade in martial arts filmmaking. It is an astonishing run in which he helped launch the careers of Jackie Chan (Drunken Master, 1978) and Donnie Yen (Drunken Tai Chi, 1984), while shaping the style of Hollywood action for a generation with his fight choreography for The Matrix (1999). Master Z is a spinoff of the Donnie Yen-led Ip Man franchise, following Cheung Tin-chi (Max Zhang), a kung fu master humbled by a loss to Ip Man who tries to rebuild his life as a grocery store vendor. Of course gangsters (led by Michelle Yeoh) and an evil English colonist (Dave Bautista) force him back into fighting. With its balletic wirework and lean narrative line, it’s a thrilling throwback to Yuen’s greatest films. I interviewed Yuen over e-mail about Max Zhang’s standout set of skills, his childhood memories of Hong Kong and his time watching Dave Bautista pro wrestling videos.

Filmmaker: How important is Max Zhang’s training in kung fu to his transition into films? Of all the martial artists you’ve worked with, is there anyone you would compare him to?

Yuen: Being a great martial artist as well as a great actor is equally important for success in this genre. For performers who can’t fight we can always use a stunt double, but you can’t do that with someone who can’t act. Max has worked very hard at both and I think that is why he is successful. There isn’t anyone I could compare him to, because people who have found success in this genre have usually foraged their own way.

Filmmaker: What martial arts forms do you think are most useful in movie fighting?

Yuen: Martial arts in cinema and traditional martial arts are very different. In cinema, we take creative liberties to create a compelling sequence. We may borrow a punch from here and a kick from there. The goal is to create a clear storytelling experience. Michelle Yeoh with a massive dao [a type of Chinese sword], I think that reads very well.

Filmmaker: Is it true you first noticed Max Zhang on the set of Crouching Tiger, Hidden Dragon (2000) as a stunt double for Zhang Ziyi and Michelle Yeoh? What were your impressions of him then?

Yuen: Max was selected for the stunt team. I was very impressed with his abilities and because he was very thin back in those days, I chose him to double Ziyi and Michelle. I could tell in those days that he had ambitions to be not only a stunt performer but an actor.

Filmmaker: Master Z: Ip Man Legacy takes place in post-WWII Hong Kong, around the time you were born. Do you have any memories from this period, and if so, did you use them to inspire the look and feel of the film?

Yuen: I have many memories of that era. I grew up in a small apartment and a large family—there were 12 of us. The sights and sounds of that time are still very vivid. The bustle in the streets to the sweets in the shops. The production designer, Raymond Chan, also grew up in Hong Kong around the same time, so he had a keen eye for recreating that period.

Filmmaker: There are some beautiful set designs in the film, especially the marquee signs that fill the street outside the bar. Could you talk about how you developed the look of the film, which is very different from the Ip Man series?

Yuen: The goal with the look was to create a sense of that period to contemporary audiences. I didn’t want to create these beautiful sets and props and shoot it like a modern film, so we took some creative liberties. For example, Hong Kong street lights at that time were white, but we chose sodium vapor lights to give a more aged texture that we often see in old photographs. If the world is believable, then the characters can be more believable, and then the story is little more believable.

Filmmaker: Your previous film was The Thousand Faces of Dunjia (2017), a very effects-heavy fantasy film, whereas Master Z is more of a throwback to your earlier work in its use of practical effects. Do you have a preference between those styles?

Yuen: Dunjia was meant to be a take on The Miracle Fighters, which I directed back in 1980. That film was done completely with practical effects because we had no other choice back in those days. It took a lot of ingenuity to do that film. It’s much easier to make a film with practical effects as the actors and crew know what they’re reacting to. That organic feel is something audiences subconsciously pick up on. I think audiences were expecting something along the lines of The Miracle Fighters and the Dunjia story threw them for a loop.

Filmmaker: One of the highlights of Master Z is the nightclub duel between Michelle Yeoh and Max Zhang, in which they battle in swift silence over a whisky glass, using only their hands on the table to shoot it back and forth. It is a challenge in which Yeoh’s mobster is gauging Zhang’s skill level, and they fight each other to a draw, the glass rising and falling between their blows as if buffeted by a wave. It reminded me of a similar fight in Dance of the Drunk Mantis (1979) between your father Siu Tin Yuen and Hwang Jung-Lee in a tea shop, where they use cups as weapons. Was this a conscious reference or just a coincidence?

Yuen: I hadn’t made the connection until just now! In Master Z I wanted to have a scene where we could see two kung fu masters size each other up without actually coming to blows, so I thought of this kind of dance with the whisky glass. I wanted to show a different side to these characters, where they think before they fight, where they realize serving their own egos doesn’t always achieve the best results. That’s really the core of Max’s character in this film.

Filmmaker: Could you talk about the importance of your father to your career and give a little background on his life? He is such an important figure that deserves more attention.

Yuen: My father was the first person that brought me on to a film set, where he started to give me gigs as a walk-on stuntman or extra. More importantly, my father was the first fight choreographer in film history which eventually created the industry I have worked in for 50 years. So not only do I owe my existence to my father, but also my career. Looking back, many of my films have been based on father figures, and that is probably not an accident.

Filmmaker: Could you talk about how that whisky glass duel between Michelle Yeo and Max Zhang was choreographed? How much planning goes into a sequence like that?

Yuen: It was very much an old school sequence, done mostly practically with fishing wire and many, many takes. It was a sequence I thought up when we had already started principal photography. To speed up the shoot, we shot the glass empty and “filled” it in post. The concept was easy to conceive, but the execution is arduous, like every sequence in this film.

Filmmaker: How would you describe Michelle Yeoh as a performer after working with her for so many years?

Yuen: We have an excellent rapport and she dials into every project very quickly. Michelle is always thinking of ways to bring something new to each role. Master Z was her first time playing a villain and after her first costume fitting, she felt a cheongsam would be the perfect contrast to her broadsword. I agreed. She had never worn a cheongsam on screen before. Even though we had only a couple weeks, we found an 80-year-old tailor who still makes cheongsam in the traditional style. Her first scene in the film was well worth the effort.

Filmmaker: How did Dave Bautista adapt to working on a Hong Kong production after being on so many Hollywood blockbusters?

Yuen: Even though Dave had made films in China, I don’t think he was quite prepared for the controlled chaos of a Hong Kong production. I think he was nervous his first day. I told him we were never going to ask him to do anything he wasn’t comfortable with and asked him to have fun with the process. I think Dave did a fantastic job with the character and his fights look amazing. I hope he had fun.

Filmmaker: How much did you know about his fighting skill before planning choreography for him? There is a moment in the movie where Bautista powerbombs a man to the floor. That seems to be a reference to his pro wrestling career.

Yuen: I studied Dave’s wrestling videos and films to get a feel for how he moves. His stunt double Rob de Groot is actually very skilled in wushu. But I wanted a believable contrast for Dave’s character among the rest of the cast. I don’t think it would be interesting for Dave’s character to do wushu as well. So I wanted Dave to be more a street fight boxing style. I wanted those punches to look like boulders dropping on Max!

Filmmaker: Who are the performers or filmmakers that you most admire that are still working today?

Yuen: I’m always interested to see which young stars will break through. Wu Jing has had two very successful films these last couple of years. Max Zhang is also someone to watch for. People often ask “Who is the next Bruce Lee?” “Who is the next Jackie Chan?” And I think that’s the wrong question. I think we need to nurture new voices and only then can this industry grow and adapt.

Filmmaker: If you had to recommend one of your less famous films, what would it be? (Dreadnaught might be my personal favorite.)

Yuen: I have fond memories of making Iron Monkey (1993). I’m sure you’ve seen it, but watch it again!