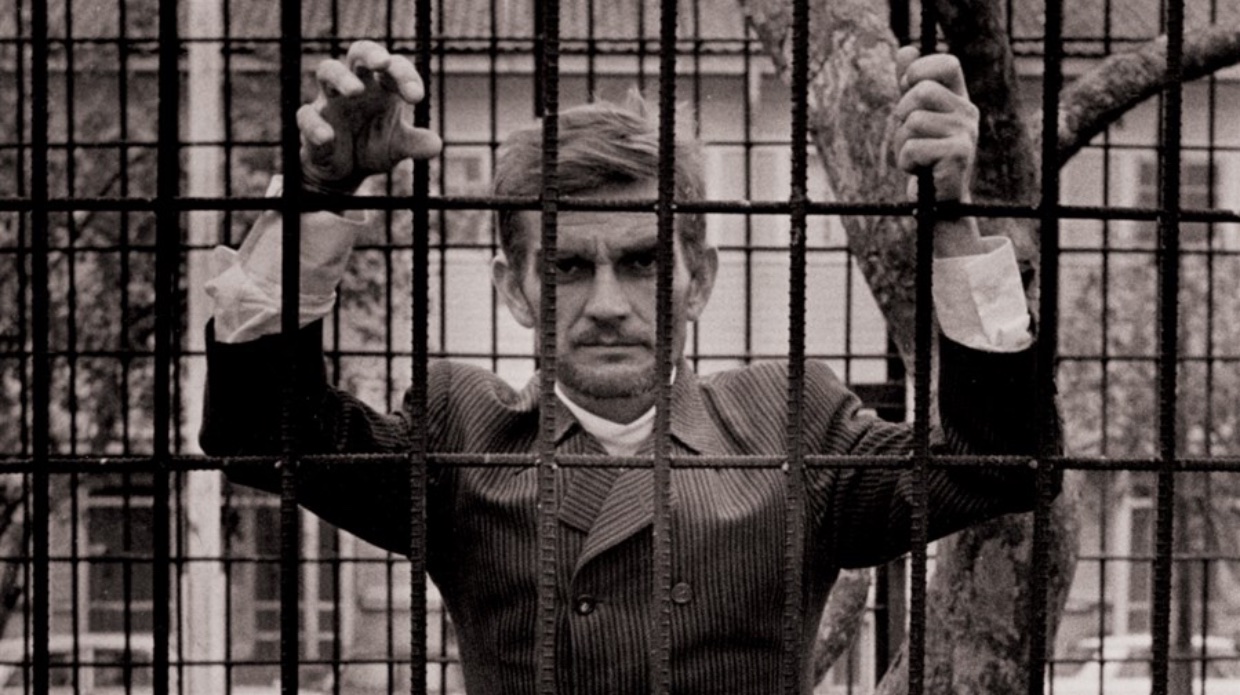 Documentary, Exodus, Hi AI, Hot Docs Documentary Festival, On The Inside of a Military Dictatorship, Our Godfather, Searching Eva, Strip and War, The Corporate Coup d’Etat, The Hypnotist

It goes without saying that the upcoming 26th edition of Hot Docs (April 25th-May 5th) presents a wealth of topnotch nonfiction films to choose from. With over 200 pictures — not to mention numerous events, immersive media and the two-day industry Forum — North America’s largest documentary festival might even feel like too much of a good thing. Fortunately for me, between the miracle of Vimeo links and traveling on the doc fest circuit since IDFA, I’ve seen a good chunk of the feature-length selections, many of which I fear will be buried beneath the headline-grabbing buzz. (Much of it well-deserved. Not only are the majority of this year’s films female-helmed, but there’s even a “Persister” section dedicated to “Women Speaking Up and Being Heard.” And then there’s the honoring of the two Julias: “Focus on Julia Ivanova,” will showcase the near two-decade long career of the USSR-born director, while the US’s own Julia Reichert will receive both the Outstanding Achievement Award along with a retrospective.)

So rather than hail any audience pleasers (Ryan White’s Ask Dr. Ruth certainly doesn’t need my help packing the house) or the splashier guests (i.e., ”A Conversation with Ai Weiwei”) I’ll just offer a wide-ranging list of standout films both likely to be overlooked and not to be missed.

The Corporate Coup d’Etat
An Inconvenient Truth for our current Gilded Age. Emmy Award-winner Fred Peabody (All Government’s Lie: Truth, Deception, and the Spirit of I.F. Stone) sounds a crucial alarm in a film that tackles the same infuriating topic as his fellow Canadians Mark Archbarand and Jennifer Abbott highlighted in The Corporation over a decade and a half ago (when I first learned that corporations are people, too). Through thorough research and the human element (Cornel West and journos Chris Hedges and Matt Taibbi share screen time with equally astute laid-off workers and union bosses), the doc makes the damning case that today’s runaway inequality and decline of liberal democracy can be traced directly back to the birth of corporatism — a concept developed by none other than Mussolini. (And that Trump is merely the “endgame of the corporate-dominated system,” as one talking head puts it. Chillingly, we’ve really nowhere left to go except fascism.)

Searching Eva
Pia Hellenthal’s addictively cinematic, and truly unusual, Berlinale premiering portrait of a restless, gender-ambiguous, philosophical millennial who documents her entire life — from fashion week to freelance sex work —  online was my top choice when I served on the Danish film magazine Ekko’s International Critics Jury at CPH:DOX this past March. Between Hellenthal’s exquisitely composed shots and her titular protagonist’s surprising bon mots (Eva longs to “go to the beach or start a revolution — depends on what my friends are up to”), it’s also pure poetry in motion.

On The Inside of a Military Dictatorship
Danish director Karen Stokkendal Poulsen’s expertly edited, behind-the-scenes peek at the political chess match that led to the thrilling rise and devastating tumble of Burma ranked a close second in my International Critics Jury picks at this year’s CPH:DOX. Poulsen’s astonishing access — to both the country’s military elite and Nobel Peace Prize Laureate Aung San Suu Kyi herself — is also unnerving. And as I put it in my final assessment, the film’s “slow-motion, literary tragic unfolding, which leads to the inevitable clash with the Rohingya, renders the flick a thriller, and genocide the cinematic time bomb under the table.”

Exodus
Crisis at the border — Iranian style. From Bahman Kiarostami (yes, Abbas’s son) comes a skilled cinema vérité look at the reverse migration happening at the line between Iran and Afghanistan — a bureaucratic nightmare that makes Trump’s manufactured emergency seem quaint. As a result of Iran’s recent currency collapse an unprecedented number of Afghans (since the Soviet-Afghan War four decades ago 2.5 million of them, half undocumented, have made Iran home) are fleeing the country — or at least trying to. But the Kafkaesque level of red tape is leaving many trapped in Iran, as helpless as at a Buñuel dinner party.

Luckily, Kiarostami and his camera are right there in the Tehran facility that’s processing these (mostly male) expats. Seamless, swift-moving editing coupled with the inventive use of Bob Marley’s Exodus as background soundtrack paint a grand portrait of the delicate dance between the exit interviewers (less harsh interrogators than bumbling social workers) and the desperate Afghans, culminating in a comedy of the absurd. (One leaving laborer is asked why he’s wearing a coat. He says he’s sick, has a headache. “And wearing a coat helps?” A 12-year old boy who’s been picking up litter on the streets to survive is asked what kids his age do in Iran and Afghanistan. “They go to school in Afghanistan — and here…Trash.” “Godspeed,” says the interviewer, and quickly calls for the next in line.)

Our Godfather
With Kim Longinotto’s Shooting the Mafia and Francesco Patierno’s Camorra also making the recent festival rounds it’s shaping up to be a good year for Italian Mafia docs. And now filmmakers Mark Franchetti and Andrew Meier delve into the underworld subject through the tale of Tommaso Buscetta, a Mafia boss who, after nearly a dozen of his family members (including two sons) were murdered by a rival Sicilian don, turned state’s evidence in the ’80s and changed Mafia lore forever. Since Buscetta was the first big boss ever to reveal the inner workings of the organization, resulting in the conviction of over 400 Mafiosi both in Italy and the US, it’s no surprise he also became Cosa Nostra’s Enemy Number One. What is surprising is that Franchetti and Meier managed to get three members of Buscetta’s surviving family — his wife, a daughter and a son — to cooperate on camera (and even provide intimate home videos), giving us a revelatory insider look into their decades-long life on the run.

The Hypnotist
Director Arthur Franck might just be the Finnish answer to Penny Lane. One of the wackiest flicks in the Hot Docs lineup, The Hypnotist walks the line between fact and fiction, truth and conspiracy, experimental artistry and unreliable narration — all in service to the real-life story (I think) of Olavi Hakasalo, aka Olliver Hawk. Hawk was a Cold War-era celebrity (con artist?) who gained fame and fortune appearing on TV and traveling the Nordic countryside hypnotizing folks — until 1980 when the charismatic showman was revealed to be a fraudster. Or was that a covert operative? The only thing I learned for sure — other than Finland’s President Kekkonen serving for a whopping 26 years (WTF, Finland?) — is that the film is so engaging I couldn’t care less.

Strip and War
Magic Mike in Minsk? Well, not quite. Andrei Kutsila’s beautifully shot doc follows Anatol and his granddad, an odd couple living together in rural Belarus, yet as apart as night and day. Literally. While the retired lieutenant colonel spends the daylight hours fretting about his garden and revisiting Soviet glory through veterans organization activities, his apolitical grandkid spends most of it sleeping. That’s because the buff millennial earns his dough as a stripper, traveling with his (male) dance partner to perform well-rehearsed erotic numbers to screaming middle-aged ladies and nightclubbing bachelorettes alike. Yet unlike Channing Tatum’s half-naked businessman, the equally straight Anatol sees himself firmly as a burlesque artiste – a calling for which he gave up an engineering career (something that still baffles his staunchly traditional grandpa). What the two share in common, though, is also what makes Kutsila’s film so unexpectedly touching — a desire to understand one another, regardless of whether they ever will.

Hi, AI
With exceptional artistry, Isa Willinger’s startling doc ponders the possibilities of robot-human relations through the stories of two humans and their AI companions in disparate parts of the world. In Japan, Grandma Sakurai’s roboticist grandson has gifted her Pepper, a talkative android tasked with keeping loneliness at bay. While in the American southwest, Chuck has Harmony, a blond bombshell (when her wig — and head — is screwed on properly, that is) who likewise provides solace from an otherwise isolated life. Haunting and meditative, the film smartly eschews providing any ethical answers, content with using excerpted episodes from the “Waking up with Sam Harris” podcast as a running narration, set to sci-fi cinematic images. Do androids dream of electric sheep? I have no idea. But when Pepper spontaneously asks a human visitor if she dreams one can’t help but wonder.