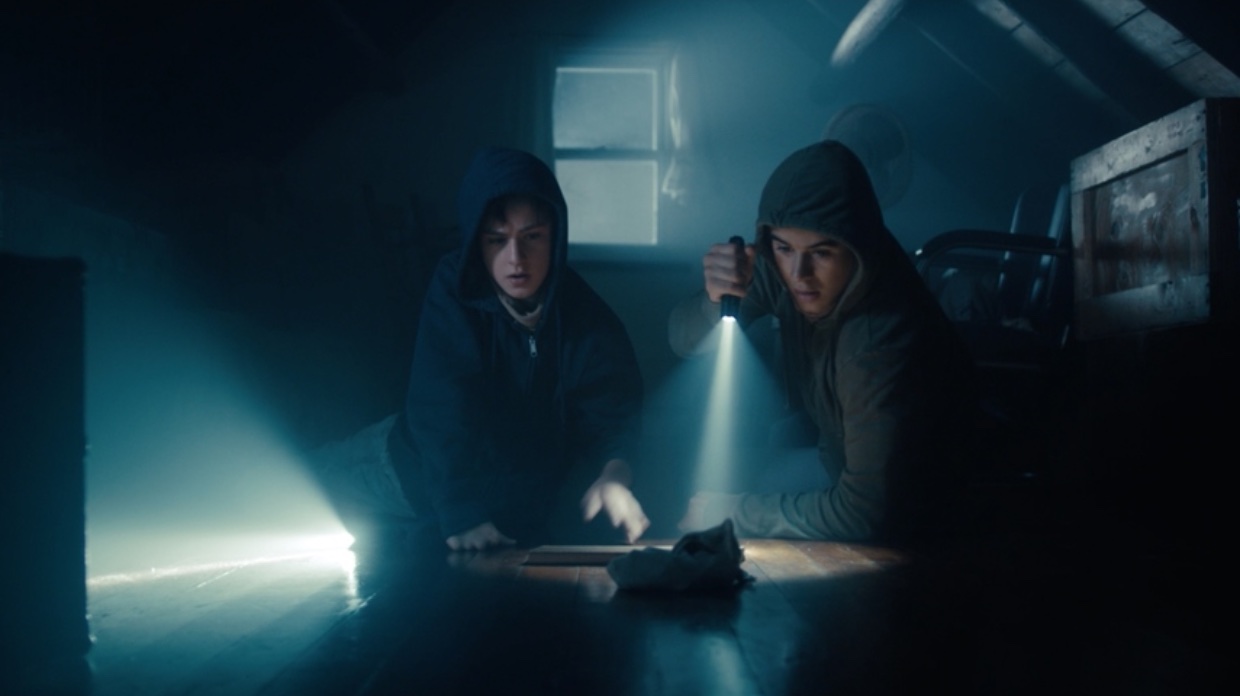 New Jersey-born Kevin McMullin, a shorts and commercial director who runs the NYC production outfit Boy and Star, makes his feature debut in the Tribeca Film Festival’s Narrative Competition with the location-rich teen crime drama Low Tide. Alan (Keean Johnson), Red (Alex Neustaedter), and Smitty (Daniel Zolghadri) spend their summer breaking into houses along the Jersey Shore, an enterprise that escalates from youthful petty crime into something much darker when one particularly valuable score — a bag of gold coins — is discovered. The gang is fractured apart, a division exacerbated by the presence of the local beauty, Mary (Kristine Froseth). Slickly shot, with a great feel for the Jersey coast, the film is aptly described in the Tribeca catalog as “marying a gritty tale of thrills and double crosses with an Amblinesque adventure story.” Below, McMullin discusses his background and commercial work, the film’s blend of tones and styles, and casting young actors.

Filmmaker: You’re from New Jersey, and the film is set one summer on the Jersey Shore. What personal experiences and memories did you bring to Low Tide?

McMullin: I was fortunate to grow up near forests and water. I spent my summers in Point Pleasant Beach, NJ near an old harbor and inlet and marine welding yard. Half a mile down the road it feels like a different world at the touristy beach and boardwalk. I was attracted to this contrast and felt that it was a good dramatic starting point. So I began writing for this specific pocket along the Jersey Shore and stole from my own memories as a kid getting into trouble with my older brother during long, hazy, parentless summers.

Filmmaker: The Tribeca program guide refers to your film at one point as an “Amblinesque adventure story” as well as to its “gritty” elements. What were you interested in doing tonally with this film? What kind of teen films did you look at for inspirations?

McMullin: I wanted to take classic themes of greed and betrayal and apply them to youth protagonists. Tonally, I was interested in taking the sense of wonder and adventure of an old Amblin film and slowly descending into something darker. Big influences were The Treasure of the Sierra Madre, The Last Picture Show, The Outsiders and Rumble Fish.

Filmmaker: As a first time feature director, but one who has a commercial company and who has done many short pieces, what did you find most challenging about Low Tide, whether that be related to its financing or its production?

McMullin: I made a proof-of-concept teaser in conjunction with the script, which helped prime readers to what I was trying to execute. These materials were passed around and ultimately helped the project land producers. Financing followed shortly and the entire prep process was relatively seamless. Our main challenges occurred during production in the form of locations and physical elements. We were trying to make an extremely low budget adventure film in a seasonal shore town during peak tourist season. The locals were welcoming but we could not afford to buyout entire beaches, boardwalks, harbors, or restaurants. Heading into production we only secured a handful of locations, so nights and weekends were spent scouting and booking the following week’s locations, which often mandated script rewrites or pursuing a different visual approach than originally storyboarded. The second main challenge was battling the elements — sand, water, forests, night shoots. I remember filming an entire week on a remote beach that had a terrible fly problem during a heatwave. But adversity tends to bring people closer together, and we had an amazing cast and crew that kept pushing to make every shot better.

Filmmaker: Speaking of your commercial company, how do you balance that with your filmmaking aspirations, and how do those two professional activities support but then sometimes conflict with each other?

McMullin: Commercials have offered me a ton of experience working in different genres and has been a fantastic way to build a network of extremely talented crew members. If I want to try out a new lens or piece of equipment, a commercial can often be a wonderful playground. The projects tend to have quick turnaround times that can be stressful but also means that within a month or two I’m on to something completely new. I try to take a few weeks off between jobs to sit down and write, which is how I slowly piecemealed together the script for Low Tide. The balancing act boils down to making a living with commercials to fuel the pursuit of making independent film, which can be expensive!

Filmmaker: Finally, tell us about casting and directing the ensemble of young actors, particularly the group of boys who comprise the house-robbing crew? What kind of balance and interplay between them were you looking for, and how did this goal play itself out on set?

Early in prep I received a call that Jaeden Martell was interested in playing the younger brother character of “Peter.” I had been a big fan since St. Vincent and Midnight Special and we hit it off over a Skype call. Jaeden is preternaturally talented and wise beyond his years, and I knew he would bring an emotional depth to the role. Moving forward, I was in the enviable position of envisioning submissions for other roles in context of Jaeden. Our wonderful casting directors Susan Shopmaker and Lois Drabkin put an obscene number of gifted young actors on tape. We found Keean early — he is so charismatic and played “Alan” with a sense of impulsivity that I knew would work as a potent foil to Jaeden since there is a bit of a role reversal regarding dynamics between younger and older brother in our story. I next saw a tape of Alex as “Red,” and what struck me was his confidence and the heavy silences in his reading- he was intimidating in the best possible way. And of course you meet him and Alex is very sweet and introspective. During our final day of casting, I saw a tape of Daniel that he submitted for a different project. In two mintues he made me laugh out loud and then tear up and I knew he could do anything. When I met him I was struck by his intelligence, and his character “Smitty” instantly took on darker, more Machiavellian layers. Kristine came in for a read and she had an archetypical innocence about her that was at odds with her sharp wit, and I loved that she provided “Mary” with a really strong backbone. Shea Whigham found the project early and really connected to this idea of “Sgt. Kent” being a father figure to the kids, as he is one of the only adults featured in the film. I’ve been a big fan of Shea since I first saw him in All The Real Girls and was honored to work with him. Shea is an excellent actor, and supremely collaborative. He’d overhear an adjustment I was seeking with another actor, and suddenly he would change his off-screen performance to help assist. In between takes he would talk about the craft with our young actors — everyone really looked up to him.