“That’s What Public Art is All About…Everyone is Invited”: Andrey M Paounov on his Christo doc Walking on Water 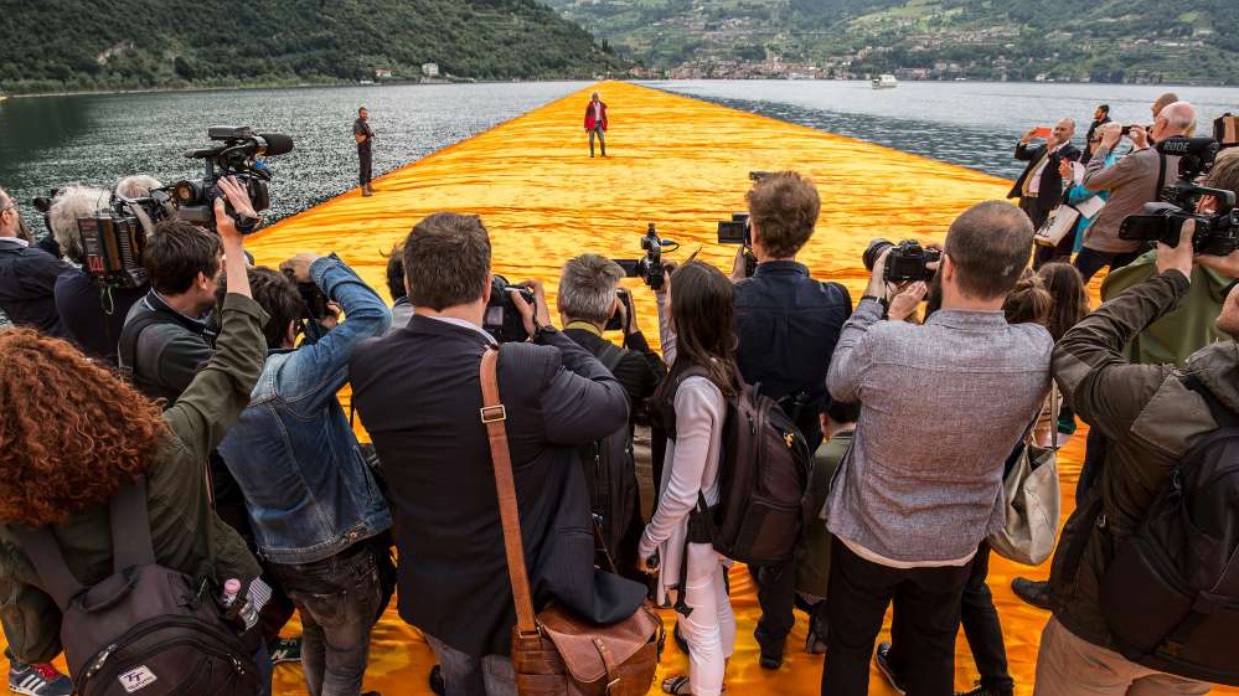 by Lauren Wissot
in Directors, Interviews
on May 17, 2019

Andrey M Paounov’s Walking on Water centers on the legendary environmental artist Christo and the realization of his most recent project (his second since the 2009 death of his beloved partner in life and art Jeanne-Claude). 2016’s The Floating Piers was a two-mile-long walkway of monk-yellow fabric that allowed over a million visitors to “float” on foot across Italy’s Lake Iseo.

What Walking on Water is not, thankfully, is your standard celebratory portrait of an unconventional maestro (though Christo, who brings to mind a Bulgarian version of Bernie Sanders, is certainly that). Indeed, what makes Paounov’s Locarno-premiering film so refreshingly unique is the parallel artistry behind the lens. Employing stunning cinematography and a reverent score, while smartly eschewing any context or backstory, Paounov thrusts us right inside the fast-moving, tension-filled creative process itself — a drama in which a grand vision can be dashed by anything from mindless bureaucracy to a sudden downpour.

Filmmaker spoke with the acclaimed Bulgarian director (whose last film was the TIFF-debuting The Boy Who Was a King) prior to the doc’s May 17th opening at NYC’s Film Forum.

Filmmaker: So how did this project initially come about?

Paounov: Christo always documents his projects. In the process of creating The Floating Piers, ten different crews documented various stages and aspects. I was approached by the producer with the idea to explore the possibilities of shaping a film out of all that material — 750 hours of documentation footage. That’s how we started.

We did some additional shooting, but also collected all kinds of extra coverage, including YouTube uploads and iPhone videos. The film is a combination of all of this.

Filmmaker: The access you got to Christo and his team seems pretty remarkable. Did you have to build a rapport with these characters in such a high-stress situation from the start?

Paounov: As I mentioned, there were cameras following the process 24/7, so the producers were really running the filming crews and staying in close contact with Christo’s team about all of the developments with the project. Besides the ending of the film and some minor additional stuff, most of the footage came from there. It was my dream to shape a film about this.

Filmmaker: Your film is also a shining example of filmmaking matching subject matter, in that it’s a truly cinematic portrait of a large-scale artist. So could you discuss the choices you made regarding your own artistry, perhaps specifically the cinematography and sound design?

Paounov: All the elements in a film are only there to serve the story and the characters. For me these aspects are an organic extension of the storytelling. I was really fascinated by the roughness of some of the footage in juxtaposition to the beauty of the project. The sound and score helped greatly to inject energy, and to enhance the sense of wonder around Christo’s art.

Filmmaker: Speaking as someone who, admittedly, wasn’t all that impressed experiencing The Gates back in 2005 — I found it a bit pretentious — your film made me change my mind about Christo, and specifically about how much control the creator has over their creation once it’s made public. (I realized it wasn’t the work — and by extension the artists — that I found pretentious, but the mostly white uptown crowd I was experiencing it with. Context does matter.) So as a filmmaker could you relate to this difficult reality — one that certainly seems to pain your subject?

Paounov: Well, that’s what public art is all about. Everyone is invited. And the crowd becomes part of the work of art, as do all the other elements — the light, the wind, the colors of the season, etc. That’s what brings the work to life. And for cinema that’s priceless.