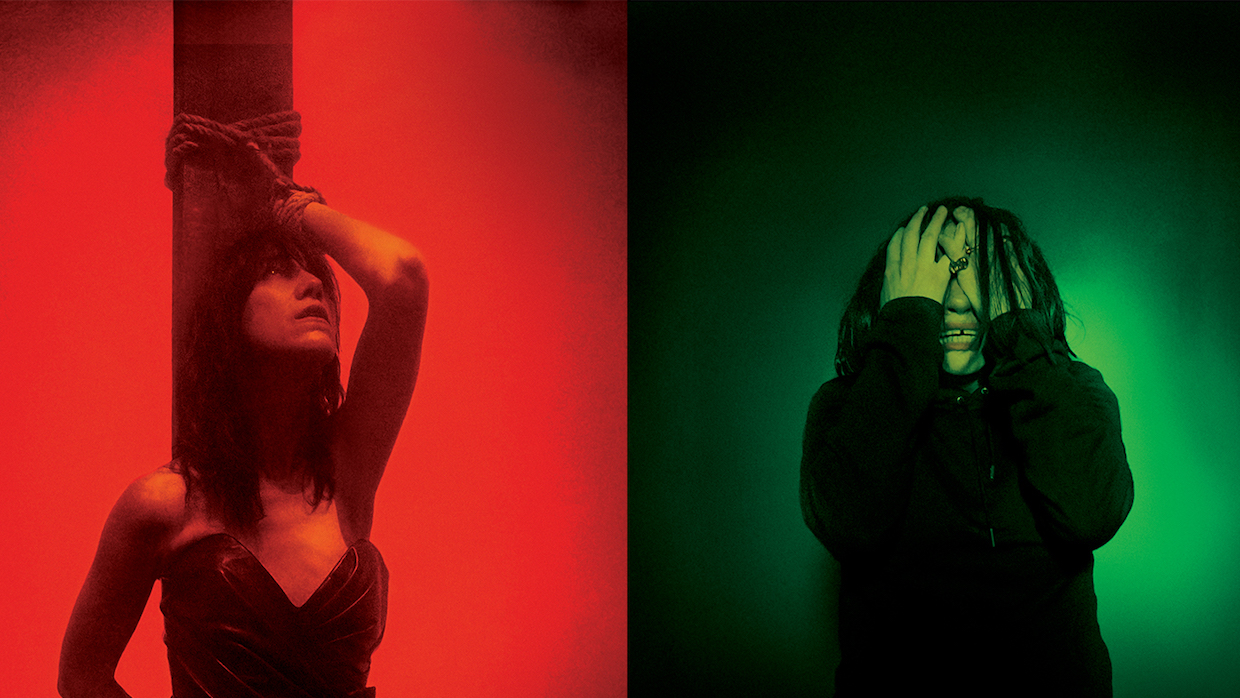 Gaspar Noé may never mature in the ways his detractors wish (rather, many of them long for the day that he disappears completely), and yet his work, especially from his erotic 3D film, Love (2015), to the present, continues to surprise me. Creator of his own distinct cinematic idiom—one almost always described as both formally and thematically extreme—Noé returns to Cannes only a year after his Directors’ Fortnight success story, Climax, with a medium-length, stroboscopic, essayistic polyptych titled Lux Æterna. Even as Lux opens with a gently flickering title card that quotes Fyodor Dostoevsky on epilepsy—a state he said offers him a “happiness unthinkable [and] unimaginable for anyone who hasn’t experienced it” —it remains unclear to me the extent to which Noé uses his cinema to seriously investigate transcendent experience, or if he simply gets a kick out of trance cinema’s vocabulary. This is one of the tensions that I find most productive in his movies, and so it was encouraging to see him double down on it here, as actors (namely Charlotte Gainsbourg, Béatrice Dalle, and Love playboy Karl Glusman) play themselves being driven to madness while on the set of a movie that’s filming a witch-burning scene.

Noé, who’s never been docked marks for forgetting to cite his sources, frames Lux with a brief history of witch trial narratives in cinema, pausing on Day of Wrath (1943) to admire Dreyer’s method tactics for evoking authentic faces of hysteria in actors tied to the stake, and later dropping in filmmaking philosophies from the likes of Godard and Fassbinder, whose words are, like Dostoyevsky’s, printed on the screen. Other citations are more implicit, as Noé borrows tools from the avant-garde’s structural film toolbox, especially dual-screen projection works like Warhol’s Chelsea Girls (1966) and Paul Sharits’ Razor Blades (1968)—the former while the film rests in its calmer, improvisational hang-out mode, and the latter once the set’s rear-projection display glitches out, rendering the film space into a flattened RGB light show (that will, I’ll warn, induce an epileptic fit in those sensitive to flashing light). The result is an invigorating, if slight, encapsulation of certain cinematic traditions, left intentionally devoid of ideas (“Keep in mind that this is a dreamlike film! It’s not about politics, but poetry!” exclaims the film-within-the-film director) so that we’re better  able to focus on the personal/appropriated philosophies being presented to us. “Thank God I’m an atheist,” reads yet another citational intertitle, redirecting sardonic Buñuel into a seemingly serious mission statement. Whatever makes you happy, Gaspar.

Since this year’s Cannes is all about running themes: Lux Æterna was one of a few films featuring actors either tied to and/or burned at the stake. Finishing what he started in Jeannette (2017), Bruno Dumont returns to Charles Péguy’s Le Mystère de la charité de Jeanne d’Arc for another quasi-musical take on the Joan of Arc narrative with Joan of Arc, which dials down the silliness (though not entirely) and cranks up the grace. Whereas the earlier film cast two actors to plays France’s most famous martyr—Lise Leplat Prudhomme as her adolescent self, Jeanne Voisin in her teenage years—this time it’s Leplat Prudhomme who returns, despite being several years younger than Joan was when these events occurred, to offer a solo rendition of her final years. Likewise, the music provides a quite different scaffolding for the film, swapping out Igorrr’s metal for French soft rock icon Christophe, whose presence—in the speakers, and at one point on the screen—nevertheless upholds the film’s ambivalent tone, riding a fine line between reverence and sacrilege.

We get this awkward tonal instability right from the start, when we see Joan kneeling to pray, eyes piercing into the sky as her body sways and jerks, Leplat Prudhomme’s body struggling to maintain balance in this pose. To state the obvious, in the image, we don’t see prayer, but a young girl in character, negotiating a persona that isn’t hers with a body that is. The amateurism of the supporting cast, whether they’re portraying peasants or bishops, contributes to this as well, as DP David Chambille’s camera tends to be more interested in the actors’ inexperience than in their line readings, the film cutting always a few beats later than a more conventional production might have. It’s this distinction between amateurism and professionalism that most marks Dumont’s recent comedic period: prestige actors performing circus acts with their faces, non-professionals striving for divinity. Indeed, the sense I had while watching all 137 minutes of this movie was that the dialogue hardly mattered; I recalled early cinema, and the way filmmakers discovered the language for cutting together narratives by presenting passion plays, for which the films’ predominantly Christian audiences would be able to follow the story simply because most of them would have already long ago internalized the chronology of events being represented on screen. From Dreyer to Bresson to Dumont and Dumont again, I knew these scenes, this tragedy, and always felt I should be devoted to something else. It’s in this way that this film, even more than Jeannette, achieves grace through a startling rejection of illusionism and embrace of materialism.

Which offers a good opportunity to say a quick something about the Dardennes brothers’ Young Ahmed, a film the press corps here would have already burned at the stake were it materially possible. An objectively touchy project that has been rife for a critical lashing since it was first announced however many months or years ago, the film follows, The Kid With a Bike-style, the teenage boy who gives the film its name, who is clearly en route to Islamic extremism. As a character he is sketchily developed, an archetype for an ideology that consumes him—and our understanding of him and his psychology—all-encompassingly. Ahmed punches through his existence according to a most concentrated and reductionist interpretation of what he’s been taught in life, which clouds the dynamics of thought—informed by morality, desire, instincts—that tell us that that destructive acts only lead to further destruction. That his absolutist thinking is attached to Islam—which is, by POV necessity, presented without nuance—has given many critics pause (to say the least), but I cannot say I’ve seen a more affirmative and humanist gesture in this year’s festival, than the brief instance in which Ahmed does experience and succumb to desire: the cognitive processes that have organized his way of thinking about himself in the present and in an eternal sense breaking down, giving way to another, contradictory way of being alive in the world. This, to me, in no way disrespect to the religion of Islam or any other religious individual; it’s simply a bracing way of presenting some of the fundamental quandaries of human existence.