“A Dog That Had a Lot of Stress in His Life”: Dog Trainer Massimo Perla on Dogman 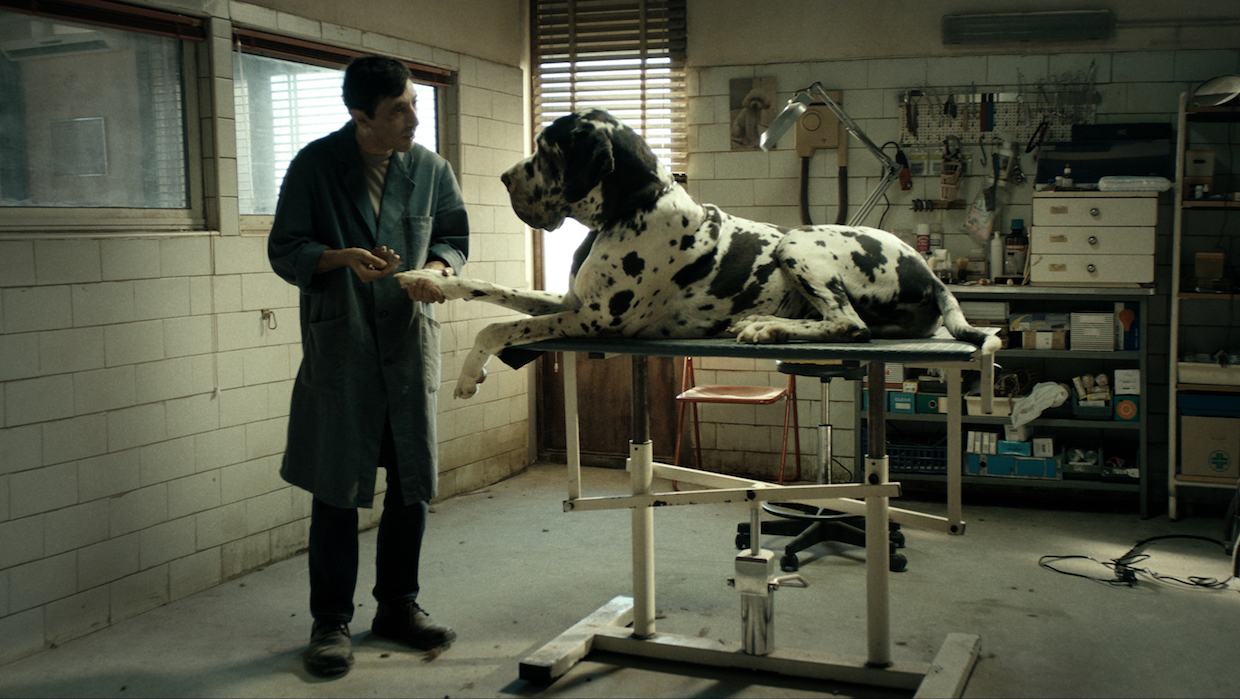 Matteo Garrone’s Dogman, a deceptively simple story of a professional dogsitter’s attempt to achieve recognition among gangsters in a small Italian town, reminds me of the great “art-house” films I watched when I was a teenager: The Magician, La Strada, Bicycle Thief, Black Orpheus. A spare story grows and builds and pushes itself until it swells to the bursting point and then: suspension. Viewers are forced to meditate on what they have watched, as all of the mini-scenarios that have built it gain their own weight. Marcello (Marcello Fonte) is friends with Simoncino (Edoardo Pesce), a small-time crook; Marcello is a mild-mannered and peaceful but troubled father of a loving daughter, while Simoncino is a human vessel for testosterone, drug-addled and enraged for most of the film. Simoncino will always be top dog, so to speak, in the friendship. The relationship is pushed too far when Simoncino asks Marcello to help him with a theft and Marcello ends up taking the heat; Marcello’s attempts to get revenge after doing prison time backfire in a grand and tragic fashion.

The story takes place against vast, poetically empty spaces: a vacant lot, an empty street, the ocean. The drama of each moment is amplified to operatic heights, proving devastating in the end. And through it all, we hear the barking of dogs. Dogs are the Greek chorus of this film, reminding us that the violence these characters do to each other (and to animals—at one point Simoncino puts a dog in a freezer) is not normal, and that we should be shocked, we should be saddened. The dogs’ alarm at the events of the story becomes our alarm. I talked to Massimo Perla, the dogs’ trainer, who has worked on over 700 films, about how he worked with the dogs to acclimate them to sharing the screen with actors, and vice versa.

Filmmaker: How did you choose the animals for the film?

Perla: I have known Matteo Garrone a long time and wanted to do this movie for many years. Three years ago, we met specifically to talk about the film. Garrone explained what kind of dogs he wanted and what kind of situations he wanted to recreate in the movie, what kinds of reactions.

Filmmaker: How were the dogs trained to respond to the events on screen in a way that was not too uncontrolled?

Perla: All these dogs are prepared for this kind of work. They know the commands. In the first scene, for example, Matteo  didn’t want the dog to really be bad; he wanted the dog to communicate the idea of being bad. To get that reaction, they needed a dog that felt afraid of something. When the dog shows his teeth and is growling, he is drawing a line, saying not to come closer. That would mean the dog is innately a little fearful, not so sure of himself, because only this kind of dog has that kind of reaction.

Filmmaker: There was a horrible scene where one of the dogs was put in a freezer and then thawed. I’m wondering how that particular scene was carried out.

Perla: For this particular scene, we used a dog that had a lot of stress in his life. The dog came from a breeder, so he knew nothing other than the breeder’s home. He was very shy and naturally inclined to shiver. We trained the dog to shiver as well as play dead. The dog naturally shivered very often—not because he was afraid of the set or the movie, but because it was his attitude. When the dog was taken out of the freezer, he needed to be very stiff. Marcello put the dog in the basin and then went to find a blanket to keep the dog warm. At that exact moment, we switched the real dog with a fake dog. The dog in the freezer was fake, but the dog in the basin was real. When the actor goes back to the basin, the real dog is lying there. They put some makeup on him to make it look like he was asleep. Obviously, he wasn’t. Then the dog started to shiver when he was warming up again. When a scene makes special requirements of a dog, you have to find a dog that has those conditions in its life. The chihuahua shivers on his own, but you can’t make a dog really afraid so that it starts to shiver. That would be horrible. You use a dog that shivers naturally, and you train it. I sort of adopted the dog.

Filmmaker: What is involved in the training of dogs used in films and how long does the training process take?

Perla: I am the founder and owner of a dog school here in Italy. I have a staff working with and around me. The most difficult part was to identify and find the kind of dogs Matteo was looking for, especially for the first dog you see in the movie. I work with the actors, obviously, because they actually need to get used to working with the dogs in the movie. They have up to ten meetings sometimes. You can’t really prepare a lot with Garrone, because very often he improvises. Whatever happens on the set at that moment, he may record it. At the same time, the dog needs to have natural reactions to the actor. The most important thing is that the dog, in that case, feels comfortable and safe. The director explains what kind of expressions he wants from the dog. It’s up to us and our knowledge of the behavior of the dog to figure out how to trigger that kind of reaction. Often, we learn from the dog.

Filmmaker: In America the common thinking is that stray dogs are easier to train because they’re very happy to be in the hands of an older master to work with. Do Italian animal trainers feel the same way?

Perla: It’s not always true, especially because often stray dogs don’t have such a strong trust in humans because of past experiences. Sometimes it can be even more difficult to train them. In very rare cases you might have a stray dog in a neighborhood that everybody knows, but that kind of reality is very difficult to find in Italy.

Filmmaker: How are trainers are actually trained themselves? For example, the animal trainer for the American Benji movies was trained by a protégée of the trainer for the film Lassie. Is there a similar process in Italy, in which older trainers pass on their knowledge to the younger trainers?

Perla: Most of the people that are working as dog trainers in Italy in the movies studied with me. My method changed the way people worked with dogs in films, especially in the sense of thinking about the wellbeing of the animals. That wasn’t always the case when I first started. For example, before I started, in order to make dogs play dead they would give them drugs. No longer.

Filmmaker: You mentioned that the dogs were acclimated to working with the primary character in the film who’s at heart a good person. Are they trained differently to deal with characters who are more violent or antagonistic?

Perla: Sure. First we let the dog meet the actor that will act in an aggressive or violent way, then we slowly help the dog get used to that kind of behavior, always associating it with something good. For example, every time the person shouts, the dog will get another treat. That way, the dog will learn that the person is not dangerous and will be prepared for anything the person might do. This is very important for us. There can be a noise or action the dog doesn’t expect, and then the dog is afraid, and you have a problem. It’s easier for us trainers to be there because we can say certain words the dog knows, telling him what he has to do, so that he can relax. That makes it much easier for us when the scene is synchronized, because you can speak to the dog during shooting.

Filmmaker: You mentioned that working with Matteo Garrone is sometimes challenging because he improvises. What other challenges were there in working on this film?

Perla: Well, some directors have a specific exact plan for the dog: The dog will go from A to B, in the middle of the scene the dog needs to lie down, and so on. In a Garrone film, he would place the camera and then say, “Okay, put the dog on the ground and start with something.” The trainer doesn’t know what Garrone has in his mind. He obviously knows perfectly, but we don’t. To prepare the dog for that kind of situation is more challenging, because you never know what Garrone may ask or what he wants from you.