With a Focus on “Story and Power,” Camden International Film Festival Announces Its 2019 Program 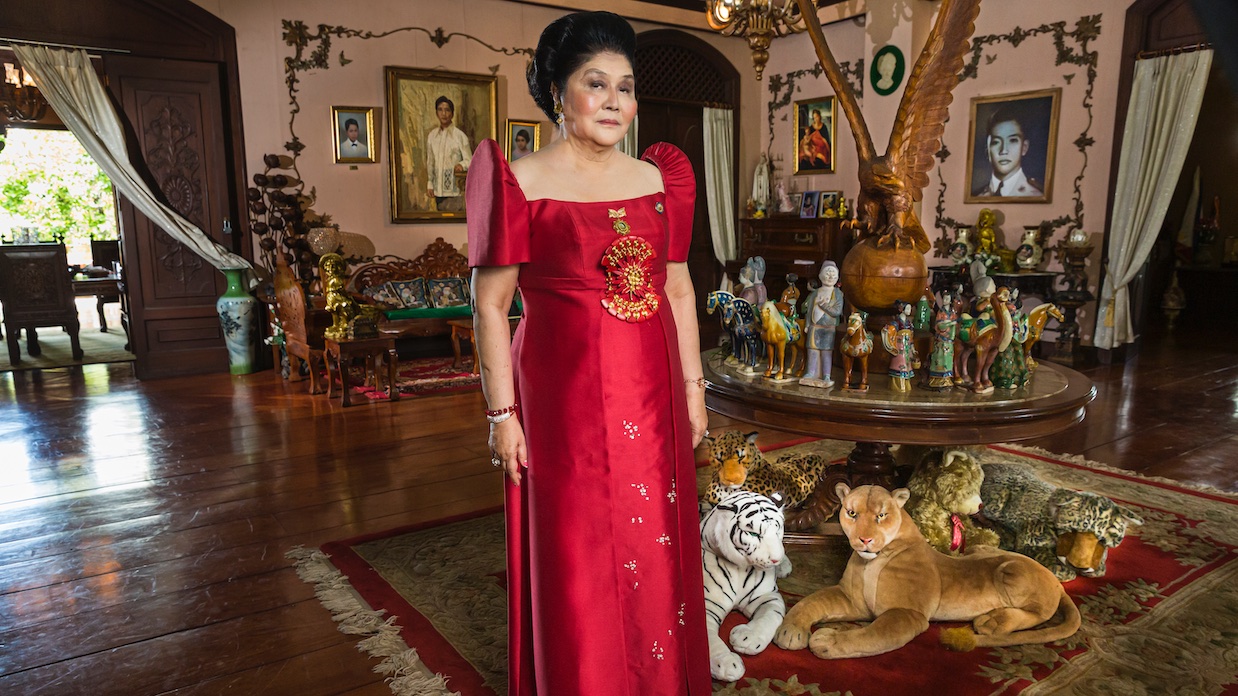 The Camden International Film Festival (CIFF) announced today the 38 features, 51 short films, and 17 virtual reality and immersive experiences that comprise its 15th edition, taking place September 12-15, 2019 throughout Camden, Rockport and Rockland, Maine. “Story and Power” is the theme of sorts for this year’s festival, which aims to prompt industry-wide conversations that examine “the ways in which power structures deeply embedded in society have continued to shape the documentary field, including which stories are told, by whom and for whom.”

“Our 2019 slate celebrates documentary as a reimagining of the ways we engage with stories from both near and far,” says Ben Fowlie, Executive and Artistic Director of the Points North Institute, and Founder of the Camden International Film Festival in the press release. “As programmers, we have been transformed by these films. They take us beyond the headlines and into the hearts of people and their stories, while also engaging us with the creative, political, and ethical decisions that went into these unforgettable films.”

“We’ve been thinking a lot about how power is inherently embedded in the way films are made, in the stories we uphold about ourselves, our values, our places,” says Senior Programmer Samara Chadwick. “As a way of normalizing the questioning of that power, we have curated constellations of works within the program that, together, offer varying approaches to common narratives.” Examples include three films that “present very different angles on the interwoven histories of the US and the Philippines. The world premiere of Alexander A. Mora’s The Nightcrawlers offers a harrowing undercover look into the Duterte regime’s brutal war on drugs. Sung-A Yoon’s Overseas, a study of filipina domestic workers training to work abroad, is set in sharp contrast to Lauren Greenfield’s The Kingmaker, which tells the story of Imelda Marcos, exposing her family’s long history of corruption, extravagance, and brutality.”

In the immediate aftermath of the devastating 2018 shooting at Marjory Stoneman Douglas High School, filmmakers embedded with students and parents whose lives were forever changed—from quiet hours of grief and reflection to those of political awakening.

ALAN MAGEE: ART IS NOT A SOLACE

This film explores the ways in which art can address the greatest challenges that we face as a society—social injustice and the urgency of speaking truth to power. World Premiere

A deep dive into a post-industrial Ohio, where a Chinese billionaire opens a new factory in the husk of an abandoned General Motors plant and hires two thousand blue-collar Americans. Early days of hope and optimism give way to setbacks as high-tech China clashes with working-class America.

BY THE NAME OF TANIA

The Amazon flows lazily through the goldmine-gashed landscape of northern Peru. Using real eyewitness accounts, directors Bénédicte Liénard and Mary Jiménez tell the story of a young woman who winds up forced into prostitution. The film reconstitutes a space of dignity and returns voice and identity to that which has been formally rendered nameless. North American Premiere

Members of a Mexican village slowly losing its old-fashioned lifestyle recall a young man’s death as the camera observes the setting.

Olivier Myron’s “Celebration” offers a rare, behind-the-scenes look of Yves Saint Laurent’s last few years of genius at the helm of his self-made fashion behemoth, before his exit from the house in 2002.

Released in 1974, Ike White’s Changin’ Times was an extraordinary album recorded in extraordinary circumstances. The film charts Ike’s journey from prison to his life as a free man, and a subsequent reinvention of himself as a performer for hire called David Maestro. World Premiere

Two young Haitians find themselves stranded at the US-Mexico border, searching for a way forward with no one to depend on but each other.

How do you explain to your friends that your mom and pop run a gay pornography shop? That is just one question asked in this playful documentary about the titular LA store and its unlikely proprietors.

This latest film from Oscar-winning documentarian Alex Gibney considers the strange case of Mikhail Khodorkovsky — once believed to be the wealthiest man in Russia — who rocketed to prosperity and prominence in the 1990s, served a decade in prison, and became an unlikely martyr for the anti-Putin movement. US Premiere

A Lithuanian doctor, priest and a war refugee resettles to Amazonian jungle in 1960’s and becomes a local hero. Yet, as he gets involved in a brutal crime, countless fake narratives that he had created around himself begin to resurface. World Premiere

Several billion tons of earth are moved annually by humans – with shovels, excavators or dynamite. Nikolaus Geyrhalter observes people, in mines, quarries and at large construction sites, engaged in a constant struggle to take possession of the planet. North American Premiere

An intimate and epic journey into the female experience of war.

Memories of the relations between the GDR and Syria return in the ruins of the former GDR-factory “Fortschritt” (Progress), when former workers and Syrian refugees meet. North American Premiere

A feature documentary that journeys beyond the global headlines that have accumulated around ‘Sudan,’ the last male northern white rhino in existence, and explores the painful emptiness of extinction through the eyes of Sudan’s three primary caregivers.

A puma stalks Pueblo Nación Ranquel. Hunting is a rite of passage, and the older boys want to kill it. But Uriel decides to take another path. US Premiere

Along the dark country roads of rural Germany, prostitutes from foreign countries work in old caravans. ln this uncanny world, the murder of one of the women takes place. North American Premiere

In Mexico City’s wealthiest neighborhoods, the Ochoa family runs a private ambulance, competing with other for-profit EMTs for patients in need of urgent help.

When the Taliban puts a bounty on Afghan director Hassan Fazili’s head, he is forced to flee the country with his wife and two young daughters. Capturing the family’s uncertain journey firsthand, Fazili documents their harrowing trek across numerous borders revealing the danger and uncertainty facing refugees seeking asylum juxtaposed with the unbreakable love shared amongst the family on the run.

NARROWSBURG follows a French film producer and a mafioso-turned-actor as they turn a tiny town upside down, peddling Hollywood dreams and persuading the town it can become the “Sundance of the East.” World Premiere

Childhood and happiness are great and sacred concepts. Even war,  cannot destroy these profound and holy words. North American Premiere

After becoming a mother, a filmmaker uncovers the untold history of China’s one-child policy and the generations of parents and children forever shaped by this social experiment.

In a learning center dedicated to the domestic work in The Philippines, several candidates prepare themselves for homesickness and for the abuses that they will possibly endure. North American Premiere

Andrew Renzi’s heartfelt and hard-hitting documentary sheds light on the lives of three of the estimated thousands of immigrants who volunteer for service in the American military, yet find themselves deported from the US once their tours of duty are over. US Premiere

SANKARA IS NOT DEAD

When a heartbroken mom asked the world to help honor the memory of her beloved son, the loss of one became the journey of many. World Premiere

Filmed on location in Harlem, USA and in Claude Monet’s historic gardens in Giverny, France, The Giverny Document is a multi-textured cinematic poem that meditates on the safety and bodily autonomy of Black women. North American Premiere

Ordinary people in New York are asked to talk about their lives and their hopes for the future in a time marked by political division and climate change.

Acclaimed documentarian Lauren Greenfield (The Queen of Versailles) aims her lens at Filipino politician and former First Lady Imelda Marcos, who, despite disgrace, remains unbowed and enmeshed in her nation’s politics. US Premiere

THE SEER AND THE UNSEEN

A magic realist documentary about invisible elves, financial collapse, and the surprising power of belief told through the personal story of an Icelandic grandmother  who speaks on behalf of nature under threat.

In midcoast Maine, a series of scientists, artists, hunters, paragliders, and naturalists reveal the wonders of a small plot of land they have never seen before. World Premiere

Agnès Varda’s new documentary sheds light on her experience as a director, bringing a personal insight to what she calls “cine-writing”.

Co-founder of Greenpeace and founder of Sea Shepherd, Captain Paul Watson has spent 40 years fighting to end the destruction of the ocean’s wildlife and its habitat. Part pirate, part philosopher, Watson’s methods stop at nothing to protect what lies beneath.

A man, a dog, a cabin near the sea. Steinar, age 75, has chosen to live a life in communion with nature.

He lives in an isolated, frozen universe at the outermost point of Europe, barely one kilometer from the Norwegian-Russian border. North American Premiere

Rooted in New Orleans, AMERICA is a modern day silent film, challenging the idea of Black cinema as a “wave,” or “movement in time,” proposing instead a continuous thread of achievement.

The Atomic Tree is a virtual reality journey into the memories of one of the most revered trees in the world—a 400-year-old Japanese White Pine bonsai that survived the atomic blast in Hiroshima.

Welcome to the Aylesbury Estate, home to thousands of Londoners, a concrete monument to the history and legacy of social housing in the UK, and a stark insight into the realities of gentrification and social cleansing.

A mysterious tree watches over a forest while humans traverse its paths, planning construction zones and searching for a lost person. As civilization slowly unravels, quiet new dynamics emerge.

Gladys, an undocumented immigrant, cannot visit her dying mother, América. Defying this separation, Gladys finds a way, however ephemeral, to reunite with her mother.

The oasis of the Sahel, Lake Chad, is not who she used to be. Ninety percent of her water is gone, leaving her feeling depleted, wary, scared and insecure.

Set in the Black Hills of South Dakota, the experience takes participants into the subterranean depths of Wind Cave and Sanford Research Lab as they unravel the cosmos from different angles. World Premiere

Stealing Ur Feelings is an AI-powered augmented reality experience that learns your deepest secrets just by analyzing your face.

A speculative essay film, presented in a Virtual Reality version, that explores the limits of perception through advances in camera technology, and the accompanying human presumptions which fuel such advancements.

Whiteness Project – Intersection of I

Whiteness Project is multi-platform media project that examines both the concept of whiteness and how those who identify as “white” or partially whiteprocess their racial identity.

Confronting the way we understand and talk about race in America, this virtual reality documentary immerses the viewer in the long history of restriction of movement for black Americans and the creation of safe spaces in our communities.

Transported back into a world of secret court sessions during the apartheid nightmare, discover the testimony of an exceptional man who instigated one of the turning points of 20th century history.

Dreams of the Jaguar’s Daughter

A three-part Experimental VR Documentary where Achik’, the spirit of young Mayan immigrant, guides the viewer’s through her dreams and memories of the journey north.

Follow blocks of prized Carrara marble as they are hewn from pristine peaks in Tuscany and travel down the mountainside to artisans’ studios and out into the global export economy.

The hills and canyons of a massive Kenyan landfill represent an emerging microeconomy where the discarded plastic is both a commodity and a future geological marker of humanity’s time on Earth.

Witness the largest ivory burn in history, when over a hundred tons of confiscated elephant tusks and rhino horns were torched in Nairobi National Park to send a deeply symbolic and visceral message to poachers and illegal trade syndicates.