“It’s About Pursuing ‘Truth’ and How Each Journalist Interprets That Word for the Rest of Us”: Yung Chang on His TIFF-Debuting This Is Not a Movie 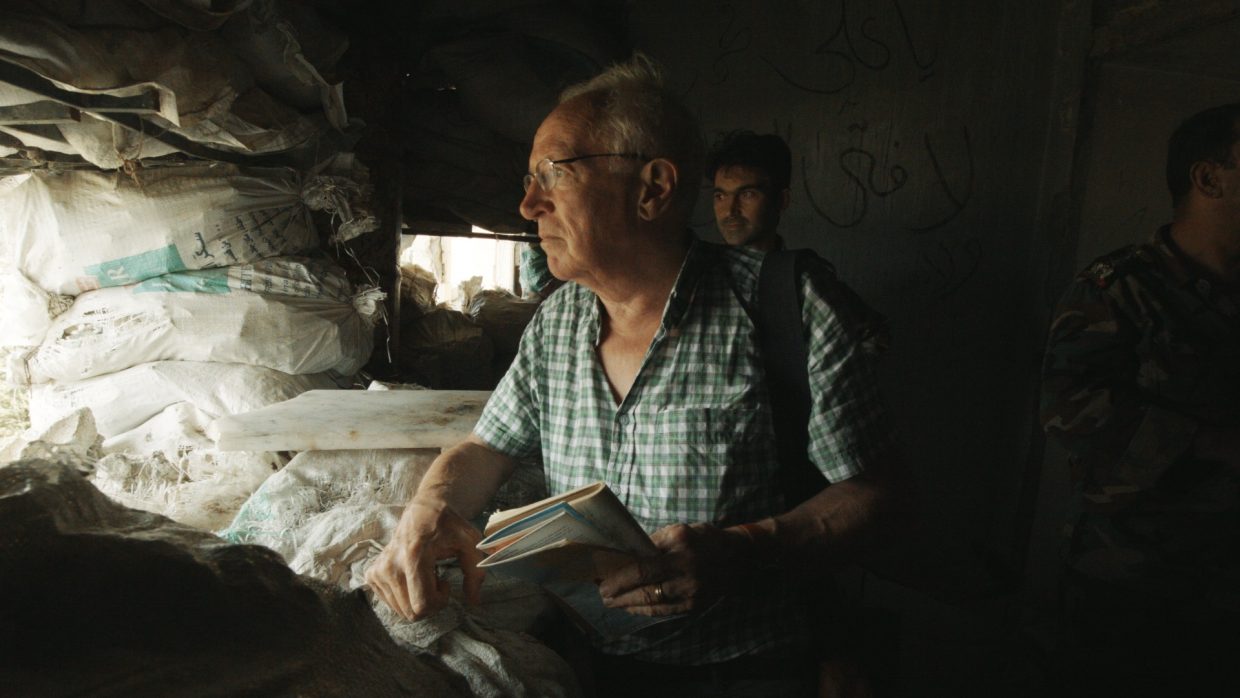 This Is Not a Movie

China Heavyweight, Documentary, This Is Not a Movie, Toronto International Film Festival 2019, up the yangtze, yung chang

Long a thorn in the establishment’s side, veteran foreign correspondent Robert Fisk has spent the past four-decades-plus reporting “subjectively” from frontlines the world over, most notably in the Middle East. An Arabic speaker, who interviewed Osama bin Laden three times before 9/11, Fisk has forever served “on the side of the suffering,” political implications be damned. Unsurprisingly, this has caused the Beirut-based Brit to become a controversial, if highly respected, figure, labeled both human rights advocate and terrorist sympathizer alike.

Now in his seventies and still dodging bullets, both literally and figuratively, Fisk continues to file columns for The Independent (he left The Times soon after Murdoch purchased it) with a near-religious dedication. It’s a dedication perhaps matched only by Canadian documentarian Yung Chang (Up the Yangtze, China Heavyweight), who tags along with Fisk on his current reporting crusades — and in the process paints a revealing cinematic portrait of an uncompromising journo hellbent on exposing modern-day news’s (i.e., Murdoch’s) “fair and balanced” charade. As Fisk himself damningly puts it at one point in Chang’s riveting This Is Not a Movie, if he were covering the Nazi death camps he would not be seeking comment from the SS spokesman.

Filmmaker had the good fortune to catch up with the Ottawa-born Chang just prior to his fourth feature’s Toronto premiere (September 9 and 11).

Filmmaker: So why turn your lens on Robert Fisk? Had you known him personally before deciding to do the doc?

Chang: I didn’t know Fisk personally. I was familiar with Fisk’s books and his writing, having followed him post-September 11th on the website Z Magazine, along with other writers like Noam Chomsky and Naomi Klein. But I hadn’t actively been following him. It wasn’t until producers Anita Lee and Nelofer Pazira reached out to me with the project.

I, too, asked myself, “Why do I want to make a film about Robert Fisk, a British journalist who covers the Middle East?” For one thing, I was weary of giving a platform to someone who hasn’t had to fight (as a privileged, “older white male”) without giving voice to someone else who could benefit from being given such a spotlight. But after an initial research trip with Fisk in Beirut, I realized this film wasn’t just about Robert Fisk. It’s about reconsidering how journalism fits into today’s saturated and abbreviated news cycle. It’s about the importance of media literacy. It’s about pursuing “truth” and how each journalist interprets that word for the rest of us. This is a film about ideas, propelled relentlessly through Fisk, but it isn’t a biography. I want the audience to engage with Fisk, to question him, to criticize him. Known by many to be abrasive, Fisk has a higher mission in the pursuit of truth than being likeable — and those are often our canaries in the coal mine.

Filmmaker: I love the film’s opening, in which you segue seamlessly from a young Fisk covering a combat situation in the Middle East to contemporary Fisk riding through the ghost city of Homs. It made me think that this decades-long career must have generated a wealth of material to choose from. So what was the editing process like? How did you decide what footage to use in the final cut?

Chang: I’m so happy that you picked up on this. The opening of the film captures the essence of the film for me. It’s this idea of compressing past and present as commentary for how Fisk thinks about the Middle East, and how history is seamless.

The structure of the film harkens back to when I first started researching. I imagined that Robert Fisk would be a very somber, brooding, morose character. I thought he would be intimidating. Here’s a dinosaur of journalism, part of a “lost generation” of reporters, the only Western journalist to interview Osama bin Laden three times — and he’s going to eat me alive! But, in fact, he’s quite the opposite. He’s welcoming, charming — always relentless and intense — but verbose and generous. This pointed me in the creative direction of the film — to join Fisk in his present-day investigations and to let his conversations guide the structure of the movie.

Discovering archive films featuring Robert Fisk through the decades opened up the possibility that the film could be built nonlinearly. As a result, I think Mike Munn, the legendary Canadian editor (Stories We Tell, Picture of Light, Road Kill), captured the essence of the present to past organic structure of the film exactly as I had imagined it. It’s free-flowing, yet hard-hitting, driving Fisk’s ideas that are intricately woven into the spine of the film, almost like a dream (or nightmare)-like essay. You come out of it in a daze. But hopefully aggravated to ask bold questions, and maybe a tad bit angry.

I had no idea where the film would take us. It’s the first film that I couldn’t impose a defined structure or narrative. There was no road map. So I just had to go with it.

And that was also to complement the journalistic integrity of the film. I’m not a journalist, I’m a filmmaker, so I had to shed a lot of my filmmaking habits, especially when making observational film. There’s no second takes. The production had to be messy and fast, and cinematographer Duraid Munajim couldn’t miss any of the dramatic moments we needed for the film. Joining Fisk in Bosnia felt like I was part of an espionage film, but without the Hollywood sheen. It was dangerous to visit arms factories and weapons dealers. It was that trip in particular that taught me a lot about the kind of journalism Fisk does.

Filmmaker: You’re Canadian, Fisk is a Brit long based in Beirut, and you’re following his reporting journey mostly through Syria and Israel. So how did you put together the funding, and logistics generally, for this international production?

Chang: I should let the producers tackle this one! The funding process began in Canada with support from the National Film Board, Telefilm, Ontario Creates, and Canadian distributor Blue Ice Docs. It was decided that a coproduction with Sutor Kolonko in Germany would open more funding opportunities, especially with a pre-sale with ZDF/ARTE and the support of a healthy German regional fund. When we pitched the film at the IDFA Forum in 2016 other partners joined us – UK’s Doc Society, Netherlands’s VPRO, and Switzerland’s RTS. We also received support from the Canadian Film or Video Production Tax Credit and the Ted Rogers Hot Docs fund. With that we had enough to make a movie.

We knew early on that we had to make sure to build a diverse team and key teammates who are insiders of the region, including producer Nelofer Pazira (Afghan-Canadian director, actress, journalist and star of Mohsen Makmalbaf’s Kandahar), Duraid Munajim, an award-winning Iraqi-Canadian cinematographer, and our Israeli-Canadian composer Ohad Benchetrit and co-composer Justin Small. In addition, without the instrumental contributions from producers Allyson Luchak (The Staircase), German co-producer, Ingmar Trost (Solitary), producer Anita Lee (Stories We Tell), and editor Mike Munn (Stories We Tell), this film would not have come to light.

Filmmaker: You include a number of scenes in which Fisk addresses the state of journalism today — digital versus print, yes, but also his bolting The Times for The Independent once it became clear Murdoch would not be taking the hands-off approach he’d originally pledged. Was making 20th-21st century reporting itself (personified through Fisk) the true “star” of the film always the plan, or did that happen more organically?

Chang: You identify this concept — making 20th-21st century reporting personified through Fisk — perfectly. Yes, early in development it became clear that the main theme of the film should focus on insights on journalism through Fisk. We knew that we didn’t want to make a history lesson about the Middle East, and that we didn’t want to make a biography about a journalist. What we had was an actively working journalist whose longevity and experience could provoke debate in how we consume the news in today’s reshaped mediascape.

I’d also add that this is a film about a foreign correspondent, someone whose job it is to translate what is happening in another country, and Fisk is one of those reporters who redefined that process of translation.

Filmmaker: Other than the fact that Fisk reveres his courageous father, who disobeyed an immoral order during WWI, and that Hitchcock’s Foreign Correspondent led him to the journo life, we actually don’t learn a lot about the man himself. For example, we’re never introduced to Fisk’s family, nor really given much insight into how he’s avoided PTSD, as he claims. (And if that’s truly the case then VA researchers should be studying him!) Did you find it difficult to get him to open up about his personal life?

Chang: Fisk is certainly a throwback to that “long lost generation of reporters,” a rare breed who believes the work is more important than the person behind the work. He protects his privacy as a working journalist, and I respected that request. This also helped me to focus the film on his ideas. A reference for me was Peter Wintonick and Mark Achbar’s film Manufacturing Consent about Noam Chomsky. I felt we had to reveal just enough of his personal life to let go. Truth is, Fisk’s personal life is his work life. He reads, he writes, he reports. It consumes him in a way.

Like in any documentary relationship there are ups and downs. But the more we got to know each other, I think Fisk trusted me enough to open up about his personal life, especially during our interview conversations.

I also wanted to reveal parts of Fisk’s character, the more prickly parts, to imply that this film isn’t hagiography. Rather it encourages the audience to question these ideas, especially the soon-to-be-infamous PTSD comment that you’ve noted. I mean, I also question how Fisk can’t carry some baggage from the massacres, murders and deaths that he’s witnessed over the 40 years he’s been working as a journalist.

My feeling is that he channels those feelings into his writing. And I can attest, and hopefully it comes through in the film (for example, in the scene with Nirmeen, the daughter whose father was murdered by drug dealers in the Sabra-Shatila camp, and in the scene about Fisk’s father) that Fisk is an emotional human being. My true hope is that this film will test the audience’s own beliefs about journalism, the subjectivity of truth, our complicity in war, and what, if any, is the relevance of the written word in the changing face of media consumption.