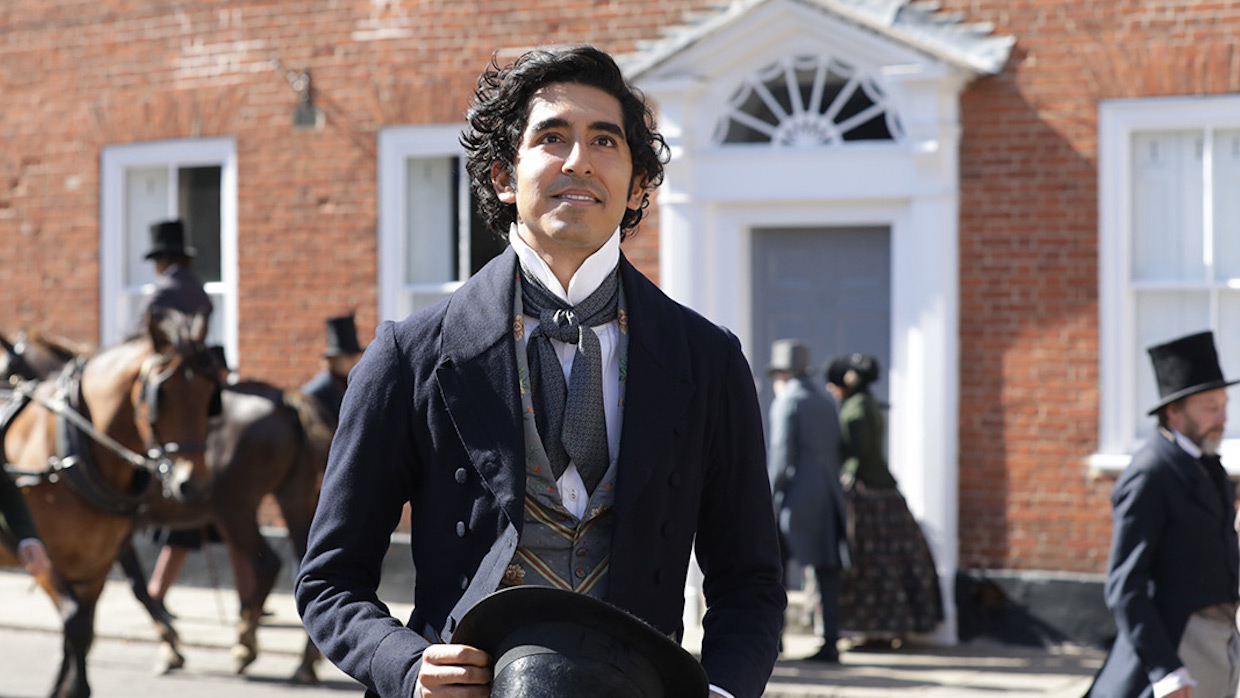 Dev Patel in The Personal History of David Copperfield

Does Armando Iannucci’s The Personal History of David Copperfield have an obvious/meaningful relationship to his other work, and what attracted him to this adaptation in the first place? The former is easier to answer: Iannucci, age 55, studied English literature at Oxford and almost wrote a PhD on Paradise Lost, so it’s not surprising he has an affinity for Charles Dickens, any more so than it’s unexpected that the overeducated Oxbridge students at Monty Python’s core would perform a sketch about Proust. Nor is Iannucci’s love for Dickens recent news: check out his hour-long 2012 BBC special Armando’s Tale of Charles Dickens, where he seeks to affirm the writer’s relevance for contemporary readers. Dickens, Iannucci says here, must surely be “more than just a designer logo attached to television costume dramas and West End shows about street urchins.” “The true Dickensian world is our world,” he continues, and “speaks to us now.” That probably explains David Copperfield‘s casting, with Dev Patel as the Dickens stand-in and numerous performers of color, all of which goes unremarked. Iannucci is insisting on Dickens’s ability to transcend the fustian Victorian culture he’s unavoidably part of (or, indeed, the limits of his own historically inscribed imagination)—that’s he’s more than a holdover from an increasingly anachronistic/racist canon appealing only to those who somehow still long for a time when the sun never set on the British Empire.

David Copperfield tracks a writer in the making who rises from abuse and neglect to the first rungs of real success, with some painful lessons along the way about class consciousness/snobbishness. Per his paid-by-serial-chapter-wont, Dickens adorned this narrative with the usual cast of comic and/or bathetic side characters, numerous odd but pleasing metaphors and slow-burn narrative arcs that take hundreds of pages to pay off. Condensing this down to compact feature length places Iannucci in the usual Dickensian adaptation dilemma of which greatest hits scenes to retain or discard—short answer, he gets most of the memorable setpieces in, chops some characters and rushes through the back third without seeming like he’s running out of time, considerably softening a few of the retained characters’ fates along the way, which is fine by me.

Before and after seeing this version, I asked friends on the ground whether they personally cared about Dickens in general and David Copperfield specifically, and the answer was uniformly no. That tells me nothing about how currently popular Dickens is or isn’t in general, but does suggest that enjoying Iannucci’s good-faith pass at rendering the novel’s high points taken care of in under two hours is crucially predicated on both familiarity and fondness. I was unexpectedly thrilled by the opening, with Copperfield at the lectern (like Dickens himself) plunging right into the text: “Whether I shall turn out to be the hero of my own life, or whether that station will be held by anybody else, these pages must show.” Patel turns away from the lectern and strides into his character’s past, the forward-rushing camera’s momentum underscored by Christopher Willis’s shamelessly neoclassical (and, honestly, disarmingly lovely) string-heavy score. The general tenor of the childhood passages is soaring rhapsody, with lots of English countryside crane shots and a general longing for an unrecapturable past. This might all be unbearably bathetic, and perhaps it is. I really can’t tell, because as a rapid-fire evocation of a book I like and will probably never read again in full in my life, I was moved by the memories it stirs in rapid succession. Iannucci will occasionally break out a characteristic bit of business, in which a handheld camera records clearly improv’d back-and-forth between performers: e.g., David’s birth has his mother in agony while the maid keeps upping the estimate for when she’ll be there to aid labor (“just two seconds” becomes “five seconds” and “45 seconds” and so on). But Iannucci generally plays the material straight while necessarily upping the rhythm throughout, leaning into its pre-existing comic emphases while downplaying its more melancholic and depressive elements.

There are some imaginative touches: David’s happy seaside sojourn with relatives Ham (Anthony Welsh) and Emily (Aimée Kelly) is interrupted by the giant-die hand of his brutal stepfather Mr. Murdstone (Darren Boyd) reaching through their upside-down-ship boathouse, a nicely near-animation transition. Sometimes the text is amended by side notes of comedy, as in David’s introduction to the perpetually impecunious Mr. Micawber (Peter Capaldi), which leads to a nicely choreographed bit of business in which creditors’ hands reach through windows, snatching objects with great physical comedy timing—still, the text is the priority. For all its period-handsomeness and surface wit (Tilda Swinton and Hugh Laurie are just as fun to see playing Dickensian comic characters as you might expect), this probably only works if you know/like the material: otherwise, I suspect it plays like an obviously rushed pass at underrealized material. As for whether this plays like Iannucci: aforementioned handheld improv bits aside, not really. However, it’s not hard to imagine why Iannucci might be very interested in a writer whose arc he depicts as one of mastering language first in fragments, then conquering narrative itself, leading to an ability to not only write one’s perception into mass consciousness but (as the narrative gets briefly Charlie Kaufman-ish) to alter reality itself. It’s a short path from benevolent Dickens to malevolent rhetorical optics.

A lower-profile world premiere on a subject I know much less about, the primary attraction of Alla Kovgan’s Cunningham is that it’s in 3D, which has obvious appeal for a movie about a choreographer that’s heavily comprised of dance performances. The opening shot leans into 3D hard, tracking in to a dancer in a tunnel that snakes back very far indeed, then performing a Spike Lee people-mover shot to bring the dancer forward while the tunnel extends even further into space. 3D is used to both emphasize the depth of the spaces, interior and exterior, where the dances unfold, and to jazz up the tepidity of providing biographical context. Mercifully, Cunningham avoids the usual story-editor-approved best biographical practices—no dreary march through childhood, no opening chorus of talking heads testifying to Merce Cunningham’s greatness or legacy—but does need to provide some background material along the way. To this end, when archival photos or footage take center frame, it’s foregrounded while an imaginary stage light shines from further back, normally stage right. At other points, a background image is the base layer, topped with photos at two different levels of depth, handscrawled graphics of Cunningham’s letters taking the top—all intelligent ways to keep the eye moving through necessary material.

Cunningham’s key collaborators included John Cage, who was always good for quotes: I chuckled at his proposition that contrary to the idea of art as something that makes life bearable, he sought “an art so complex, illogical and bewildering that we could return to life with real pleasure.” (His “Totem Ancestor” is a banger, and the movie is fun of classical modernist tracks.) Robert Rauschenberg (whose foundation is listed as one of the producers) and, later, Andy Warhol and Jasper Johns were also important—Warhol’s “Silver Clouds,” floating gray Mylar balloons that look like impractical pillows, add a novel dimension to the staging of Cunningham’s 1968 “RainForest.” That dance is filmed in a black-box theater, with lots of reflections and overhead shots of the balloons, which is pretty mesmerizing. I wonder how dance purists will respond to the film: the aesthetic template is clearly Wim Wenders’ Pina, but a crucial difference. Wenders kept all dancers within the master shot frame, respecting the unity of choreography—placing performers outdoors was a nice touch but didn’t alter the material. Kovgan’s restaging is done from constantly moving cameras, inevitably reframing and excluding dancers, creating new and unintended symmetries or going overhead for the full Busby Berkeley. Insofar as all of this was pleasing to watch, I’m not bothered but wonder if it’ll be thought to be disrespectful of the work that’s being celebrated—it’s almost like the target audience is people who might be bored by dancing.