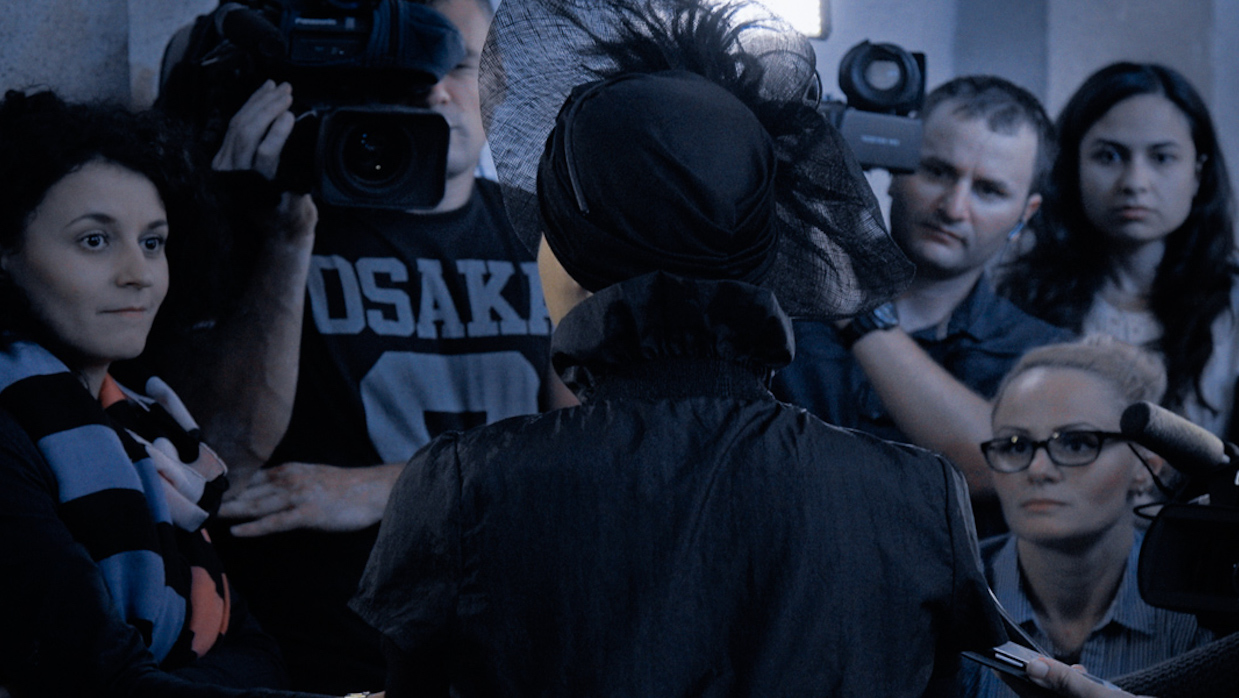 One benefit of an extended stay at TIFF (if you can swing it) is is allowing time for friends with trustworthy taste and far more patience to slog through non-obvious titles, then adjusting my endgame schedule accordingly for what they recommend. Hence the unexpected highlight of 29 TIFF screenings (24 features, four Wavelengths shorts programs and one revival screening of Pickpocket), Alexander Nanau’s verite doc Collective, about a scandal that had entirely passed me by. Opening title cards establish the fundamentals: a pyrotechnics accident at a 2015 concert led to a fire killing 26 on site, the death toll swelling to 64 as many of the hospitalized were infected, with subsequent anti-corruption protests leading to the Romanian prime minister’s resignation. Collective presents two sequences before jumping into its main storylines. The first is one of the only times the victims are directly highlighted, a meeting at which relatives of those killed and share their stories—potentially a super-manipulative to preemptively assure viewers are Moved or Involved, but there’s no music or other gilding of the footage. What happens next is, at first, seemingly funny: footage of a band growling out death metal lyrics against Romanian corruption, which might seem to be a response to the events already described. It’s not: it’s footage moments before the concert fire itself, which then plays out in horrendous real time until it’s mercifully cut off. Predictably, it’s extremely hard to watch.

Unexpectedly, the rest of Collective turns out to be a grimly good time in two parts. The first is a journalism procedural centered around Sports Gazette reporter Catalin Tolontan, introduced with zero fanfare identifying himself at a press conference. Nanau acts as his own DP (per usual, IMDB tells me—I haven’t seen his previous films), displaying a seasoned instinct for always pointing his camera in exactly the right place. He’s there for car stakeouts as photographers take concealed camera shots of Dan Condrea, the owner of pharmaceutical company Hexi Pharma at the scandal’s center (actual investigative journalism with a budget!) and in the room for whistleblower meetings. The trail of corruption is unusually flagrant, the government’s attempts at pushback optics not remotely plausible: after the Gazette has a chemical analysis performed on Hexi’s products and finds the active agents are all diluted, the government runs its own tests and declares 95% of hospital disinfectants are chemically correct, a disparity of results that doesn’t remotely pass any smell test.

Official lies fall apart at dizzying speed, creating an unavoidable undercurrent of black comedy. This section also low-key doubles as a portrait of a contemporary newsroom: journalists look at Facebook to see how their articles are doing and implement new standards for comment moderation (delete anybody posting “kill them all,” writing “it’s a genocide” is OK). Some moments are older-school narrative beats out of All the President’s Men (numerous editorial sit-down recaps of the story to date, Tolanton pumping his fist as a source comes through over the phone). There are no fully-developed “characters” outside the subject at hand, but the newsroom’s distinct personalities shine through their work; my favorite is the reporter who digs up bank account documentation and enthusiastically says he can dig up much more (that’s OK, he’s told, and basically asked to chill out). He’s only in two scenes: in the first, he’s wearing a black Dream Theater t-shirt. In the second, he’s wearing…a white Dream Theater t-shirt.

In the second half Nanau switches POVs to the new health minister, hastily appointed after his predecessor has to resign. Vlad Voiculescu endearingly introduces himself at a press conference thus: “Good morning, I am Vlad. As of Friday, I am Minister of Health.” I would love to know how Nanau obtained god-level access to government meetings as Voiculescu (profiled here at the beginning of his appointment) discovers government corruption in real time. Thanks to the Romanian New Wave’s standout directors, over the last 15 years I have watched countless scenes of Romanian bureaucracy in inaction. Radu Muntean’s 2015 One Floor Below‘s protagonist is a man who greases the wheels of vehicle registration; Cristian Mungiu’s 2015 Graduation subject practices corruption to ensure his daughter can study abroad rather than having to inevitably grow up to perform her own unavoidable ethical compromises. The New Wave itself kicked off with Cristi Puiu’s 2005 The Death of Mr. Lazarescu, in which what should be a relatively simple ambulance trip to the ER is an endless nightmare of doctors trying to abdicate responsibility and endless impossible paperwork, the title subject slowly expiring as turf wars unfold. These are a small sample size of similar examples rooted in reality; as of last year, Romania was ranked the world’s most corrupt country, and not for the first time.

There are numerous comparably staggering moments in Collective: when Voiculescu tries to understand why products that create deadly, unsterilized conditions can’t be immediately pulled from the shelves, he’s told that the companies can’t do that without issuing corrective invoices, which they can’t do because their bank accounts have been blocked, and that’s just that. In sane countries, Voiculescu sputters, a known deadly agent would be pulled without any kind of nonsense about corrective invoices, and that’s before he’s explicitly told that neither he nor his team are expected to have ideas, only to wait for guidance from (inevitably corrupt) “experts” within the system. Voiculescu’s a dream subject, both for the levels of access he presumably enabled—it turns out that when he talks about transparency and accountability he actually means it, which is a nice surprise—and because of his generally unflappable demeanor. He’s more bemused and trying not to laugh than actively angry, with good energy in the face of odds so crushing they can’t be hyperbolized. I have enjoyed many of the Romanian New Wave titles in a bleakly comic way, but now it feels like I only abstractly understood what I was seeing: the nonfiction equivalent is incredibly galling and completely outrageous. It feels like the hammer has unexpectedly come down down on one of the more important film cycles of the millennium.

I was often mildly bored while watching Kiyoshi Kurosawa’s To the Ends of the Earth, but it’s sat well since. It’s definitely a sketchbook film, whose structure feels improv’d on the road as Kurosawa shot his first-ever production in Uzbekistan. What plot there is centers on a Japanese TV crew shooting a travelogue. The presenter projecting a hardy traveler’s enthusiasm to viewers back home, Yoko (Atsuko Maeda), isn’t actually happy with her career: she wants to go home, commit to a singing career (Maeda is an IRL J-pop star) and marry her boyfriend. But on camera she’s selling a good time, and watching her switch from pre-roll pensiveness to heavily telegraphed pluckiness is compelling and jolting, that tension stretched to its max when she takes repeated, vomit-inducing trips on a grueling amusement park ride that shoots her in 360 circles in a cage that performs its own flips within those arcs: she has to do it over and over for B-cam purposes. Elsewhere, she has a couple of city perambulations that build to extended rambles and anxiety attack escapes from others, sequences that are alternately slack and intriguing local color. There are also some unexpected oneiric reveries and (why not?) a couple of musical numbers—the woozy working-but-maybe-also-vacation? tone fit the festival setting.

I’m not really sure where to start with Pablo Larraín’s Ema, which is almost certainly a bad movie but in ways idiosyncratic and lively enough that it’s a fiasco rather than a straight failure. Following the extremely turgid twin biopics of Neruda and Jackie, Larraín returns home to make a movie whose plot defies concise synopsis or attempts to impose coherence. Ema (Mariana Di Girolamo) is a dancer in a turbulent relationship with choreographer/dance company head Gaston (Gael Garcia Bernal): they adopted a young pyromaniac, things didn’t go well, they gave him back, and now everything’s gone to shit. The first ten minutes throw a lot of allusions to weird stuff going down without explanation, which is nicely mysterious but instead of teasing out the reveals, there is shortly thereafter a massive amount of exposition info-dump that clears everything to date up quickly. The subsequent proceedings have many new, baroquely outrageous developments, including Bernal delivering a Jordan Peterson-esque rant against the evils of reggaeton, which turns women in sexual objects and men into slavering lustful beasts (I’m paraphrasing, but not by much), the liberal deployment of flamethrowers and the casual use of the phrase “male dinosaur cum.” Stage center is Ema, who turns out to be way hornier than literally any Gregg Araki character—and yes, the word “horny” comes up a lot.

At first I thought Larraín was proceeding from the assumption that young millennials are all bisexual and horny, but as the narrative expanded it’s clear that everyone here fits that description, with age not being a factor. Calling this movie’s sensibility legitimately “bisexual” or “queer” is as much of a stretch as saying Blue is the Warmest Color is peak lesbian filmmaking—the ladies are all bi, the dudes are straight, and there’s a ridiculously straight-gaze montage cutting together Ema’s orgasms with four different partners (those must be some tough weeks to schedule!). Is this a deliberate rendering of overheated heterosexual hysteria as tragicomic camp? I’m probably giving this too much credit, but in between long dull patches (surprisingly so for a movie whose whole intent is to be overheated) there were four or five times I grinned and thought “OK, go on…” at some fresh development that inevitably led to something even brasher and stupider. This is a clear failure, but I’m kind of glad it’s out there (and has at least brought a fun Nicholas Jaar score into the world).