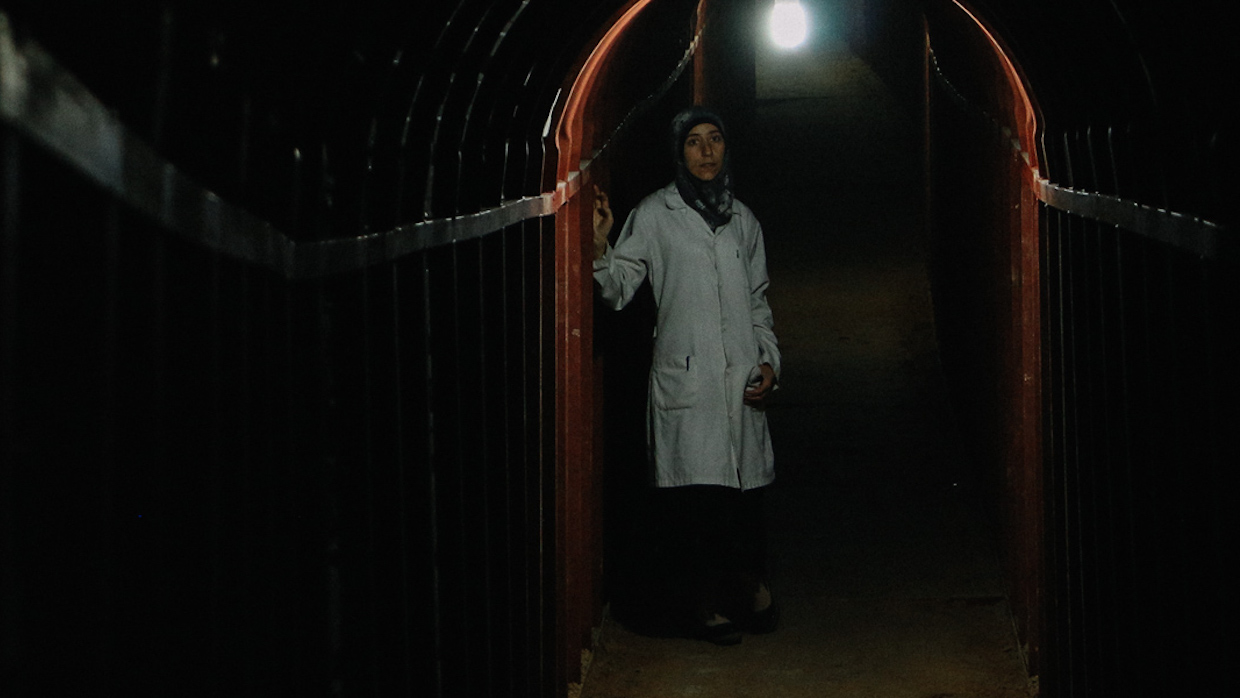 Every year, the Camden International Film Festival manages a nifty magic trick. Its ambition swells within the concise duration of what amounts to a holiday weekend (if the second Friday of September was deemed, say, National Non-Fiction Day), with the same handful of venues, including two opera houses and a gorgeous vintage bijou, in three adjacent towns in northern seaside Maine. Marking its 15th year this September, CIFF–produced under the umbrella of the Points North Institute – consistently ups the stakes for filmmakers and audiences, without suffering from the dreaded festivalitis: the condition that arises when film festivals become all tangents and no core and start to disconnect from their communities

So far, CIFF remains one of the most thoroughly grounded community-driven festivals in the US, whether that community is the local one from which the festival sprang or the more global network of documentary filmmakers that it reconvenes annually on the cusp of autumn. The 2019 edition was reliably chock-full of thoughtful programming, formidable guests and singular late-night party environments (created at Rockland’s legendary Bicknell Building, a former manufacturing warehouse that has seen its last karaoke blowout and is sadly slated to become a mixed-use development).

There were reliably intensive occasions for conversation and investigation. The Points North Forum explored the theme of “Story and Power,” with two days of panels concerned with issues of social justice, narrative engagement and representation, as guests zeroed in on such topics as “Story and Relinquishing Power” and “How to Watch a Doc.” The Storyforms sidebar surveyed recent evolutions in VR, exploring the cosmos from the depths of a cave (Lux Sine) or cleverly illustrating in real time how the Internet collects data from your selfies (Stealing Ur Feelings). The program also included facing installations that explore race and identity: New Orleans artist and filmmaker Garrett Bradley’s acclaimed America–a lyrical kaleidoscope of African-American history–with a revised 2016 installment of Whitney Dow’s The Whiteness Project.

While CIFF reliably acts as a launchpad for new films destined for major platforms—such as Lauren Greenfield-Sanders’ opening night The Kingmaker, about Imelda Marcos and her visions of excess, and Alex Gibney’s latest, Citizen K, which explores the radical transformation of Russian oligarch Mikhail Khodorkovsky into a pro-democracy dissident—the festival rewards anyone eager for a deeper dive. It’s especially valuable for international perspectives.

Some of the strongest work came out of Syria, as it has for the past few years, as filmmakers bravely document the catastrophic conflict that has shattered the country over the past several years. The Cave, which just won the documentary audience prize at the Toronto International Film Festival, captures the fight of a female-led team of doctors to save lives in an underground hospital, while Russian bombs explode above. Director Feras Fayyad (Last Men in Aleppo) delivers both a white-knuckle dispatch from Syria’s civil apocalypse and a moving portrait of a fiercely determined physician, Dr. Amani Ballor, who fights a second battle against the cultural prejudices that would deny her the role she fulfills so heroically. The parallel drama For Sama, which has been laden with festival awards since its premiere at Sundance, also screened, with its powerful and lyrical first-person account of writer and co-director Waad al-Kateab’s five years surviving the Syrian civil war as an activist who serves along with her husband in an improvised hospital. The period sees the birth of their daughter, Sama, to whom the film is composed as a testimony.

The notion of raising a child amid such devastation is terrifying, but also underscores a stubborn resilience. That vibe animates Copper Notes of a Dream, Iranian director Reza Farahmand’s doc about a tight-knit gang of kids, led by the exceedingly confident 10-year-old Malook, a Palestinian refugee living in a sector of Damascus shelled to smithereens amid conflicts with ISIS. The verite camera whirls and spins with its subjects as they strip vacant properties of their copper wiring, in hopes of parlaying their bounty into a massive free concert. Without overtly playing to sentiment, the story is as quietly heartbreaking as it is hopeful in the childrens’ zest not only to abide but to transform the damaged world around them.

Florian Kunert’s Progress in the Valley of the People Who Don’t Know considers the challenges faced by Syrian refugees abroad—in this case, relocated to a far-flung corner of the former German Democratic Republic once beyond the reach of Western broadcast signals, which left its population out of the loop during the Communist era. As such, the film balances twin diasporas: the geographical one of the Syrians, now housed in the industrial ruins of the once-churning Fortschritt (Progress) factory, and the philosophical/temporal one of the former workers, retirees whose glory days are revisited through the strange mix of nostalgia and totalitarian absurdity evoked by archival footage from the 1950s and ‘60s. Likewise, as a group of young Syrian men take language and cultural lessons from the elderly townsfolk, the shattered monument to Soviet idealism reminds them of the decimated homes they left behind, an irony that offers only cold comfort. Kunert finds in these situations a kind of deadpan profundity, suggesting bonds between disparate people stranded by dramatic historical disruptions.

There’s a whole other kind of accommodation served up in Lovemobil, Elke Margarete Lehrenkrauss’s gritty portrait of two women who work as prostitutes in the forest off a roadway outside Berlin. They pay steep daily rent for their use of aging Volkswagen campers, which are managed by an elderly former sex worker named Uschi, who—despite her maternal posture as she dishes out bits of tough love—also profits from the seemingly limited options her immigrant tenants face. (Although Uschi, too, has a story). The camera’s intimacy with its subjects–Rita, from Nigeria, and Milena, from Bulgaria–unlocks a world within the cramped interiors of these boudoirs-on-wheels, offering glimpses of carnal transactions but more often emphasizing the boredom, frustration and anxiety of the women’s complicated situations with humor and compassion. The film begged loudly for a post-screening discussion with the director, but for reasons that seem inexplicable, Lehrenkrauss was denied a visa that would have brought her from Germany to the festival.

The heart of the festival is, as ever, the annual Points North Pitch. The two-hour public session plays out across the stage of the Camden Opera House, with an array of jurists representing funders and institutions (Tribeca Film Institute, Sundance Institute, ITVS, RYOT, Cinereach and more), seated “Last Supper”-style, as filmmakers take their position in the wings stage left to make their cases for each of the six invited projects. The aspirants, girded by healthy applause from a packed house and bootcamp-style preparation with a team of blue chip mentors (Sundance Institute’s Kristin Feeley, Back Allie Film’s Andrea Meditch and Sabaah Folayan, a former Points North fellow with the film Whose Streets?), enter the non-fiction octagon, to use one of moderator Brian Newman’s apt descriptions of the event. They do their damnedest not to appear as if their every nerve is ablaze, with a handful of minutes to hit all the high points with as much focus as passion. A clip is shown, and the panel weighs in, offering praise and encouragement, but also candid critiques and, now and then, a dose of tough love.

Nesa Azimi, whose Driver scored the winning pitch, was grateful to share her project after developing it in “relative isolation,” taking away a sharpened vision for its progress and a better sense of how to talk about it. “It’s been a gift to have been thrown into an instant community of fellow filmmakers who are all going through many of the same challenges as we craft our films,” said Azimi, a former intern at the Maysles Documentary Center who has worked as a producer for Frontline and Al Jazeera’s Fault Lines. “There was real complicity—a sense that we’re all in it together.”

Azimi’s film addresses sexual harassment and assault in the trucking industry, with long-haul truck driver and advocate Desiree Wood at its center. “I called her on a whim and we ended up speaking for four hours,” Azimi said. “Desiree is an extraordinary and generous person and that first call convinced me that I needed to get on the truck with her. A couple months later I rode with her from Florida to North Dakota. That’s when I realized this would be more than a short film about a single issue, but that it would be a close-up portrait of a remarkable and under-known community, a universe.” Azimi claims a $10,000 post-production package from Boston-based Modulus Studios. Tailings, which captures the difficult fight of Brazilian environmental activists, received a special prize that includes a $5,000 discretionary grant from the Seattle NGO Nia Tero, for director Pedro de Filippis and producer Bronte Stahl.

While some fellows confronted social and ecological issues head-on, there also was the lively and provocative Deep Inside the Shaman’s Den, an archival portrait of the Berkeley performance artist (among many other things) Frank Moore (1946-2013), a cultural gatecrasher who explored frontiers of sexuality, disability issues–he was severely stricken with cerebral palsy– underground art and spirituality. Director Keith Wilson delivered one of the most spirited pitches I’ve yet seen in several years of attendance, as his iconoclastic subject kept popping up on the screen to interrupt the pitch. Grace Harper, a London-based filmmaker, then took matters toward the explicitly personal with her family memoir In Another Life, an emotional rollercoaster ride through “addiction, death, grief and love” as she explores the complex life of her late father. It was Harper’s first public pitch for her first feature, which she has worked on mostly by herself for the past seven years. “The public nature of the pitch is really special because you get a sense of how an audience is responding to your work at an early stage,” she said. “My film is very personal, and I was really moved by people afterwards coming up to tell me their stories. When you’re working on something for a long time, particularly a film that’s this personal, you can’t underestimate what it means to hear from an audience that it’s working on that universal level.”

Making docu-dreams come true is certainly a huge part of the “small town/big vision” mission that defines Camden, but it doesn’t always work out as well as it does here. An often ruefully comic cautionary tale about filmmaking was the perfect wrapping for this year’s fest: Martha Shane’s portrait of an auteur-gone-wrong, Narrowsburg. Well, auteur might be a stretch for Richard Castellano, a character actor best-known for a small role in Analyze This, who parlays his reputation playing Italian-American heavies into an extravagant long con at the expense of the gullible citizens of a New York hamlet 100 miles northwest of Manhattan. The excitable Castellano shows up, all fast talk and glad hands, and spellbinds the town with talk of both a movie (a crime saga called Four Deadly Reasons) to be filmed there, and a film festival that will make Narrowsburg, Pop. 431., the “Sundance of the East Coast.” His French-accented wife, Jocelyne, joins Castellano in an increasingly shady and desperate shell game that exploits the kind of show-biz fantasies that seem encoded into American DNA. Shane, who previously co-directed the intense, illuminating late-term abortion documentary After Tiller, really digs into the darkly comic potential of the story, making clever use of a volume of film and television clips and archival footage (including a good bit of amateur documentation) dating back to the late 1990s to reconstruct what became a very public catastrophe. The film concerns itself as much with its small-town dreamers as their deceivers, making what could be yet another oddball true-crime narrative into a story about how images, and the desires they generate, can intoxicate people and make them do crazy things. And in the end, who knows what can happen? Narrowsburg’s extended coda is packed with surprises.