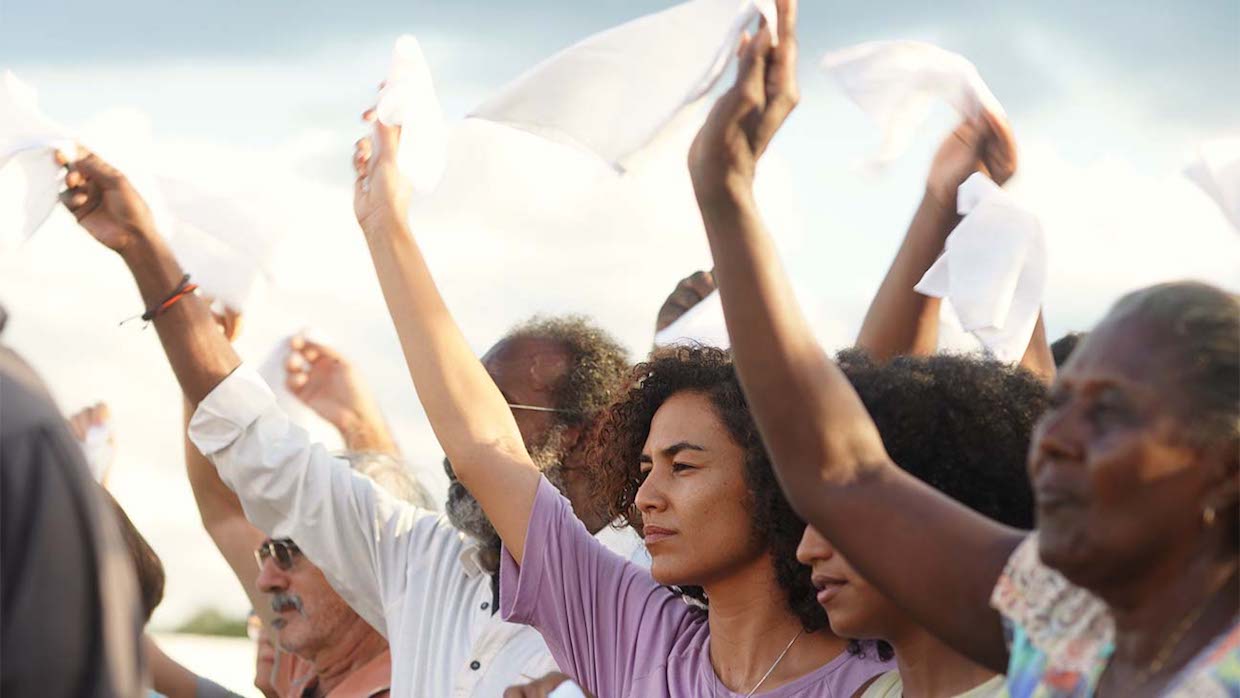 The 2019 New York Film Festival kicks off tonight with Martin Scorsese’s The Irishman — and do you really need us to recommend it to you? With our editorial staff seeing the film tonight, we’ve been avoiding Film Twitter, where extremely positive reactions have been leaking out from this morning’s press screening. But Scorsese’s long-anticipated, epic, effects-driven film is just one of many highlights we’re certain of as New York brings together some of the best out of Cannes, Venice, Telluride and Toronto along with some fantastic short-film premieres, talks (Lynne Ramsay!, DP Denis Lenoir!, Olivier Assayas!), and new VR and immersive theater work. With more reports coming as the festival unfolds, here are some first-round picks from us (myself, Vadim Rizov and, culled from his Cannes reports, Blake Williams)  — mostly films we’ve seen along with shorts programs we’re looking forward to.

Marriage Story. After viewing Noah Baumbach’s latest, a movie about divorce, its title — Marriage Story — is less ironic fillip than signal of intent. The director’s autobiographically-inspired charting of the dissolution of a couple — both its interpersonal breakdowns as well as the ways in which divorce is brutally commodified by our legal system — has plenty of caustic exchanges and simmering he said/she said angst. But the overall effect is one of melancholy regret and life-moves-on endurance. The marriage here is a chapter being closed, the filmmaking looking back from a distance, like an image receding in a rear-view mirror. The bracingly messy edges of some of Baumbach’s earlier relationship dramas (Greenberg, The Meyerowitz Stories) are smoothed here by his extremely well-crafted screenplay — all subtle setups, unexectedly emotional payoffs, the negation of the negation, etc. — and Adam Driver and Scarlett Johansson’s assured, awards-season performances. — SM

I Was at Home, But… The Dreamed Path, Angela Schanelec’s ninth feature, was also her international breakthrough. Less elliptical and wrenchingly personal, her follow-up I Was at Home, But… centers around a woman (Maren Eggert) two years out from the death of her late theater director husband. Performances range from deadpan Straub-Huillet readings performed by children to a 10+-minute monologue about the artifice of performance—this is a display of different acting modes in addition to being fairly devastating. — VR

Liberté. Albert Serra’s Liberté, Blake Williams wrote from Cannes, is “an indecent, shameless/shameful art film that—honestly, who am I to say isn’t a masterpiece? Following up his most accessible film yet, The Death of Louis XiV (2016), Serra here premieres the climactic third form of his “Liberté” project — first a stage play, then a two-channel installation that, I’m told by those who’ve seen it, contains a lot of overlapping material with this filmed version — letting it all hang out for what may very well be the most radical and uncompromising thing I’ve ever communally experienced in a theater (here or anywhere else).”

Vitalena Varela. Near the beginning of Pedro Costa’s Locarno prize-winning Vitalena Varela, the titular protagonist — who previously appeared in the director’s 2014 Horse Money — emerges, dripping wet, off a jetliner, having flown from Cape Verde to Lisbon. She’s hoping to reunite with her husband after a nearly 40-year estrangement, but her arrival delivers a cruel joke: he died three days earlier. Moving into his delapidated apartment in the labyrinthian Fontainhas neighborhood, she literally inhabits his absence, his spartan dwelling becoming a kind of chiaroscuro-lit theater of grief, memory and the questioning of faith. The film’s pitch black visuals, drawn-out rhythms and flashes of gallows humor become deeply immersive even as they prompt questions: what degree of masochism, or delusion, has sustained this woman’s love for her unfaithful, absent husband — or, more properly, the memory she has of him — over all these years? The resonant, truthful answer arrives with an elegantly simple image that, departing from the gloom, sears the eyeballs. — SM

To the Ends of the Earth. One of Kiyoshi Kurosawa’s weirder experiments, which is saying something, To The Ends of the Earth follows a small Japanese crew filming a TV travelogue in Uzbekistan, centering around the perky on-camera, extremely anxious off- presenter who just wants to go home and pursue her musical career. There are a few songs to top off this predictably unpredictable film. — VR

Young Ahmed. Writing from Cannes, Blake Williams noted that the Dardennes brothers’ Young Ahmed was “a film the press corps here would have already burned at the stake were it materially possible. An objectively touchy project that has been rife for a critical lashing since it was first announced however many months or years ago, the film follows, The Kid With a Bike-style, the teenage boy who gives the film its name, who is clearly en route to Islamic extremism. […] That his absolutist thinking is attached to Islam—which is, by POV necessity, presented without nuance—has given many critics pause (to say the least), but I cannot say I’ve seen a more affirmative and humanist gesture in this year’s festival, than the brief instance in which Ahmed does experience and succumb to desire: the cognitive processes that have organized his way of thinking about himself in the present and in an eternal sense breaking down, giving way to another, contradictory way of being alive in the world.”

First Cow. There are mix-tape elements of Kelly Reichardt’s latest, First Cow — call-outs to Old Joy, Wendy and Lucy, and Meek’s Cutoff. But this 1820 (or so)-set picture is its own thing and one of Reichardt’s loveliest, a beautifully measured, quietly emotional tale of entrepreneurialism and friendship on the Oregon frontier. “Cookie” Figowitz (John Magaro) and King Lu (Orion Lee) work are craftsmen hustlers, working in the crevices of an emerging Western capitalism. At night, they steal milk from the region’s sole dairy cow, owned by the region’s wealthy British landowner; by day, they use that milk to cook delicious little breakfast cakes, bought by their outpost’s hungry settlers, including the landowner and his crew. There’s a delight to watching the ironies of this political economy play out, pleasures accentuated by the intimacy of the film’s 4:3 framing  (cinematography is by Chris Blauveldt) and the sparse beauty of Leslie Shatz’s sound design. Bookend scenes featuring an inquisitive Alia Shawkat give this fable-like story a melancholy glow. — SM

Jonathan Schwartz Program. The experimental filmmaker Jonathan Schwartz, whose The Crack-Up was a highlight of Projections two years ago, passed away last year at the age of 45. He’s remembered with a free-to-the-public program of seven of his shorts, all but one projected on 16mm. It’s on a Friday afternoon, but go if you can. — VR

Uncut Gems. Working with a bigger budget, stars from both film (Adam Sandler) as well as sports (an excellent Kevin Garnett in a full-on supporting role as himself) and music (The Weeknd), as well as DP Darius Khondji (who they first collaborated with in this Jay Z video), the Safdie Brothers certainly aren’t mellowing in their now mid-career. Uncut Gems is an exhiliarating, relentless, full-on adrenaline rush of a film, with Sandler fully inhabiting the mania of a man addicted to all manners of personal and professional chaos. (Remind you of anyone these days?) The plot is set in motion when Sandler’s character, a midtown diamond dealer, receives the titular jewel, straight from an Ethiopian mineral mine. Although he intends to use it to erase gambling debts that are sure to accrue again a week later, it winds up spinning his life even more out of control as Garnett, for whom the gem is a good-luck talisman with deep historical meaning, borrows it before a big Celtics game. There are no other filmmakers working today who capture the streetwise, libidinal and addictive rhythms of New York City with the vivacity and inventiveness of the Safdies. — SM

Shorts Program 2. Shorts Program 2 is comprised of two films by two of Filmmaker’s 25 New Faces. Following the political kefuffle around his Rat Film, Theo Anthony returns with another essayistic doc, Subject of Review, a world premiere, about what sports replay technology has to say about the limits of human perception. And Demonic is the U.S. premiere of the Australian experimental filmmaker Pia Borg’s 28-minute film in which the Satanic Panic of the 1980s is plumbed and remixed through archival footage, recreation and computer animation. — SM

The Raven. A group of creators including long-time Filmmaker contributor Lance Weiler along with Ava Lee Scott, Nick Fortugno, Nick Childs, Joel Beckerman are behind this work of site-specific (at the four-story American Irish Historical Society) immersive theater based on the death, if not the life, of Edgar Allen Poe. — SM