Allowing for Transitions: Editor Anne McCabe on the Restorative Rhythms of Marielle Heller’s A Beautiful Day in the Neighborhood 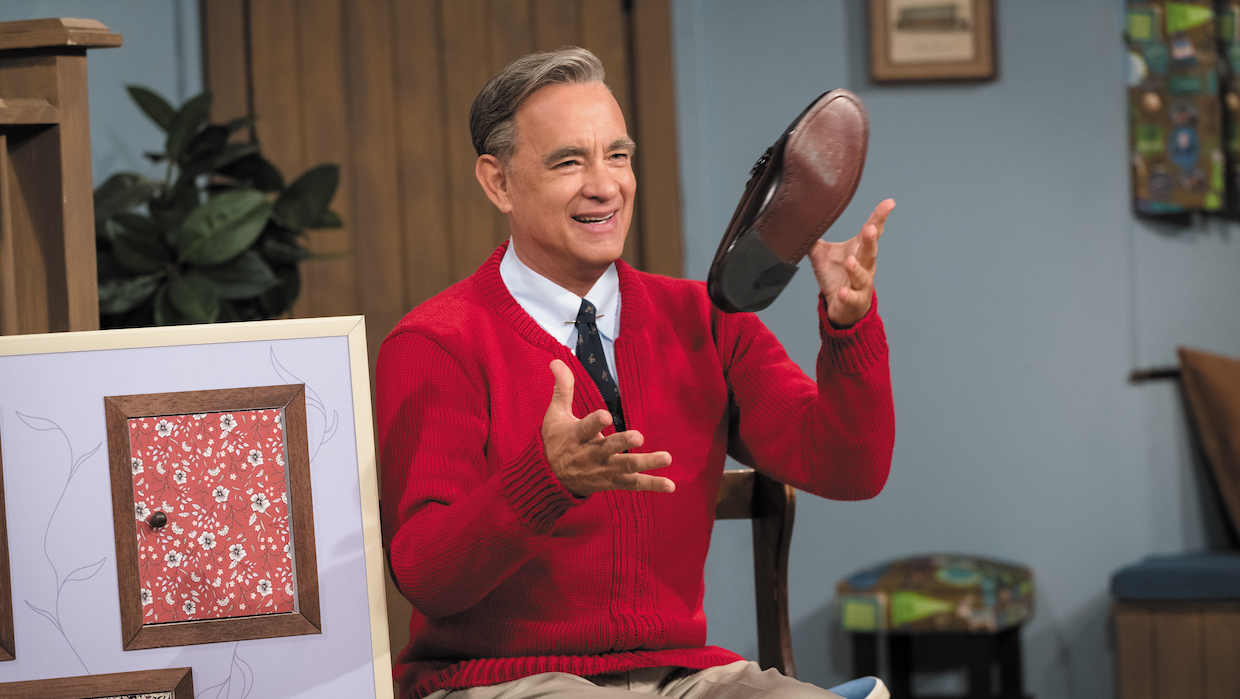 Tom Hanks in A Beautiful Day in the Neighbored

Marielle Heller’s A Beautiful Day in the Neighborhood centers on New York–based journalist Lloyd Vogel (Matthew Rhys), who’s assigned to profile Fred Rogers (Tom Hanks) for Esquire in the late 1990s. For editor Anne McCabe, who cut Heller’s previous feature, Can You Ever Forgive Me?, and Beautiful Day, the process was fundamentally the same on both: She began cutting dailies on day two of production while working through familiar challenges. “Any movie I work on is a lot longer at the beginning,” she observes. “Almost always you’re working on the setup. There’s usually too much at the beginning, and you’re paring it down. There was a lot more material about being a journalist, and we pared that down because it was pretty clear we wanted to get Tom Hanks and [Rhys] together.”

Beautiful Day begins with a seamless recreation of the opening of an episode of Mr. Rogers’ Neighborhood, with Tom Hanks in character on set. Throughout, the film toggles between 4:3 segments shot on the reconstructed Neighborhood set (built in the original Pittsburgh studios where the show was filmed) and 1.85:1 for the larger narrative unfolding outside the studio. To recreate the show’s look, DP Jody Lee Lipes used the production’s Ikegami broadcast camera, while shooting the rest of the film on an Alexa Mini. The show was cut live, which wasn’t an option for Beautiful Day’s recreations because of the number of takes involved. Instead, McCabe says, she tried to mimic the feeling of being cut live, for a movie that itself “is like a long episode of the original show.”

As it moves between the studio and the outside world, Beautiful Day makes clever use of miniature sets, expanding the original Neighborhood to include Pittsburgh and New York, transitioning as Vogel goes back and forth. “The wonderful thing about the miniatures is that in movies you’re always finding these transition shots,” McCabe notes. “Often, the editor is asking the production team [for a way to ensure] a break, or a beat, to match one scene and a larger scene. This was a wonderfully inventive way to have transitions without going, ’Let’s get a shot of the Brooklyn Bridge.’” After a shoot lasting 33 days, the team took a few days off, then shot the miniatures. “About a week later, Marielle came into the cutting room and we worked together until we finished the movie,” McCabe recalls.

McCabe studied original episodes of the show to capture its rhythms, though she had strong memories of watching it as a child to draw upon. Some episodes are directly recreated with the original participants, including a string quartet that performs for Rogers (although, McCabe notes, one of the original ensemble members had passed away since the episode was taped). Whether recreating the show or the outside world, the production “avoided a super-slick look. Mr. Rogers was not a slick guy, and we were not trying to create a different look for him.” The number of takes varied—a wedding sequence early on, with a large number of extras, had more coverage than other scenes—but “sometimes it’s just a few takes because [Heller] knows when that’s the right material,” McCabe says. “She’ll do as many takes as she needs, and she always knows when she’s got it.”

Both Can You Ever and Beautiful Day had test screenings, though McCabe thinks the latter might have had one more. “Those are always hugely challenging,” McCabe observes. “You’re putting the movie up, not finished, without final sound and color, to 400 people off the street who write down if they like the character. But you really see how it feels with an audience, which is very different from showing it to friends and family. You want to feel that they’re still engaged. You don’t want to have too many endings. What is the right time to leave the scene?” One climactic scene cut from the final movie showed Vogel’s father (Chris Cooper) leafing through a book of clippings of his son’s work. The scene, McCabe says, was strong but redundant for the overall project: “It was like, ’We don’t need another beat about the two of them.’” Beyond structure, the biggest challenge was tonal. “It was a really different kind of movie to make from what I work on,” says McCabe, whose recent credits include Chris Rock’s Top Five, Dirty Grandpa and episodes of Succession. “I tend to work on comedies, and it’s challenging to work on a movie that deals with childhood trauma, emotion and how to be a responsible man. I thought it was incredible to work on this type of movie.”