“Human History is Created by People with the Courage To Do the Right Thing”: Eunice Lau on Accept the Call 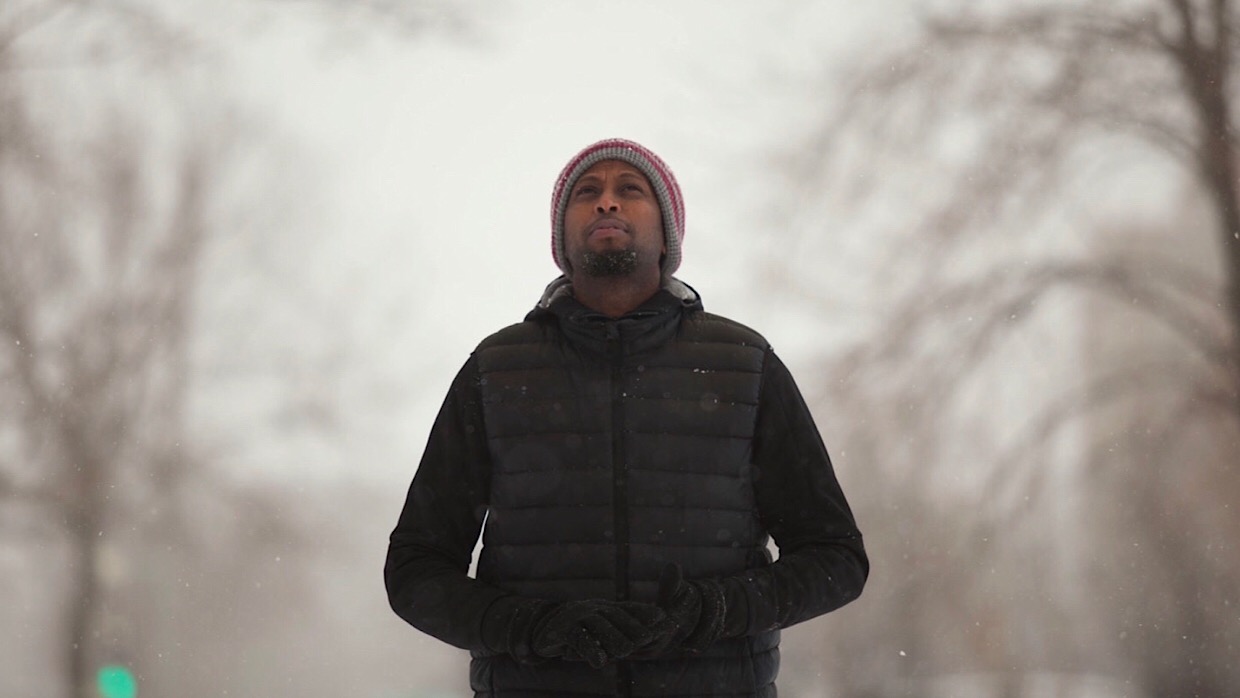 by Lauren Wissot
in Directors, Interviews
on Jan 17, 2020

Based in NYC but born in Singapore, filmmaker Eunice Lau is intimately familiar with the immigrant experience. And yet, her own history seems a far cry from that of the family portrayed in her most recent (IFP supported) doc Accept the Call. One of my top picks for the Human Rights Watch Film Festival last summer, the nuanced character study centers around Yusuf Abdurahman, a refugee from Somalia who fled that country’s civil war in the ’90s. Abdurahman now lives in Minnesota, where he married (and subsequently divorced), had seven kids who he’s wholeheartedly devoted to, and currently serves as a translator and facilitator at a Head Start program. On the surface this refugee’s life would seem to resemble that of many men in his Somali community — the largest in the US — if not for one personal (and political) tragedy. His eldest son Zach is currently serving a 10-year prison term, the result of having been arrested (and many, including Abdurahman’s activist daughter Ikraan, would say entrapped) in an FBI counterterrorism sting at the age of 19.

Filmmaker took the opportunity to discuss the thought-provoking doc with Lau prior to her film’s January 20th airdate on PBS’s Independent Lens.

Filmmaker: So how did you discover this story in the first place? How exactly did you meet Yusuf and his family?

Lau: I learned about the story when news of the arrests hit the headlines. In 2012 I traveled to Somalia and made a short documentary that explored how the civil war forced millions to leave home. Since then I have always wanted to explore a story about the Somali diaspora in America and how their lives have changed. Specifically I wanted to know how their identity — and especially that of their American-born children — evolved in their adopted new homes. I saw an opportunity to do that when the story of the arrests broke.

Through a contact I approached some of the families of the teenagers arrested. I showed them the short I’d filmed in Somalia, so they knew I came with an understanding of their history and journey. Yusuf and Ikraan were among the first to participate in the film.

Filmmaker: Though your short Through the Fire deals with Somalia’s civil war, you yourself are a Singaporean based in NYC. Did being a fellow immigrant make it easier to gain the trust of your subjects — or were you always aware of your role as an outsider?

Lau: I approach every story as a fellow human being, and my ultimate desire as a storyteller is to capture the essence of what makes us human. I seek to understand, not to judge. I realize that when I do that I find more commonalities in experience and emotions, despite the apparent differences between the film subjects and myself.

One of the books I introduced to Zach is Viet Thanh Nguyen’s The Sympathizer. He was surprised to learn that the history and experience of Vietnamese refugees is so similar to that of Somali refugees. I’m fascinated with exploring identities and conflict because my hyphenated identity has the same footprints. My ancestors left China because of conflict and ideology. Like Zach, I went through a similar confusion of self while growing up as a Chinese-Peranakan Singaporean whose first language is English because of my country’s colonial legacy. I left Singapore as a young adult, and lived in several countries as a journalist before settling in New York City where I began my journey as a filmmaker. So I guess I’ve always been an outsider. But that’s okay, because I think it gives me a perspective that allows me to be empathetic to those who are vulnerable or marginalized. And the tension of not belonging to a singular identity or space keeps me skeptical and always questioning what appears to be self-evident.

At the same time, I am aware of my lack of depth in understanding Islam and the Somali culture in telling this story, so I defer to the film’s subjects to educate me and the audience. I’ve always maintained that this is Yusuf’s and Zach’s story to tell. I am merely the medium through which they share it with the world.

Filmmaker: So did you set out to focus almost exclusively on Yusuf (and his relationship to his daughter Ikraan to some extent)? Or was this the result of others declining to participate in the film? Yusuf’s ex-wife, for example, is only present in old photos, and with her face obscured.

Lau: We started off with many characters, including two families whose sons were arrested during the FBI sting operation. Also elders in the community, and leaders in law enforcement, including chief judge for the U.S. District Court John Tunheim and former U.S. Attorney Andrew Luger. But Yusuf’s determination to find out what happened to his son took on a life of its own, and his interaction with his American-born children, especially Ikraan, gives us an intimate look into the acculturation gap between them. So it became apparent then that the focus of the story should be on the Abdurahman family because Yusuf is such a compelling character. This is ultimately a father-and-son story, universal and relatable in so many ways, because it allows the audience to experience the personal and understand the political.

Zach’s mother declined to participate in the film and requested that we conceal her identity, but she gave her blessing since Zach is happy to share his story.

Filmmaker: Were you at all concerned that filming might make things worse for Yusuf or for Zach, though? We never actually see Zach in prison, and I noticed you make a point of including scenes in which your crew was asked not to shoot around various mosques.

Lau: In terms of the law, the outcome of Zach’s sentencing had already been determined before the filming concluded, so his participation in the film will not hurt him. But the court did not ask the pertinent question of why, which is what our film seeks.

In terms of personal safety, we talked about some of the challenges Yusuf and his family might face throughout the filming, but he was adamant that we should not cave in to the threats of extremists or naysayers in pursuit of the truth. His courage comes from the fact that he’d already been speaking out against the growing influence of an ultraconservative interpretation of Islam for many years before we started filming with him. He had received death threats in the past and that had not deterred him. Back then Zach had issues with his father’s advocacy, but now he agrees that more dialogue and honesty is needed in order to help youth like himself who may be vulnerable to being manipulated by extreme ideology.

I included the scenes of Yusuf’s confrontation with some members of the Somali community because I wanted to be honest about the reality he was facing. More importantly, though, the tension encapsulated a lot of latent emotions that have finally come to the surface. It is a portrayal of a father in grief, a father whose heart was broken twice. First it was the betrayal of his son by pledging allegiance to the very kind of people he’d warned his community about. Then it was betrayal by his government, for entrapping his son in order to convict him instead of giving him a second chance. His anger stems from his sense of helplessness that he could not save his son. You may not agree with Yusuf’s way of trying to win the community over to his point of view. But when you see what a parent whose child was taken away from him feels like, you begin to understand why he was blindsided by this almost-messianic fervor to stop another child from entering harm’s way.

Filmmaker: What are your hopes — and perhaps fears — for the film? As someone with a journalism background, have you prepared your subjects for any potential backlash (either from the authorities or from the Somali community itself) now that the doc will be available nationwide?

Lau: I hope our approach to telling this story through a father-and-son lens will allow audiences to connect to the story emotionally as parents, siblings, or fellow citizens. Ignorance is what keeps us fearful, and storytelling is a powerful tool to keep fear at bay. Yusuf is not naïve about the reality of a potential backlash. We talked about it a lot, but he convinced us that human history is created by people with the courage to do the right thing. As a documentary filmmaker I have to support him and get the story out there as far and wide as possible. Beyond our broadcast on PBS’s Independent Lens, Accept the Call will also be streaming worldwide on the Independent Lens YouTube channel.

I am hopeful that the film will receive more positive outcomes than negative ones. Our experience traveling the film festival circuit from New York to San Francisco, and even to Singapore, has already shown us that. A young Hispanic-American shared how Zacharia’s story of growing up as a second-generation American resonated with her. A white American filmgoer at Woodstock confessed that her perception of Islam was shaped by the news headlines until she watched our film and learned much from Yusuf. A filmgoer who considers himself a conservative said that the film made him question if the convicted teenagers deserved such long sentences. A Chinese-Singaporean grandmother said that she identified with Yusuf, and that the film had made her realize why we must always overcome our prejudices and stereotypes.

At the invitation of Pica (Parents in Community Action) Head Start, the pre-school where Yusuf works, we also screened the film in Minneapolis to about 400 people. Among them, many were Somali. We could not be more grateful for the outpouring of love and support that Yusuf received. One Somali dad said that he hopes the film will galvanize the community to do more to support kids growing up in single-parent households, while another Somali parent said he was going home that night to tell his children that he loved them.

I hope this film will begin urgent dialogue and build bridges where fear and ignorance reside — all while entertaining our audience with the tale of a father and son finding their way back to each other’s hearts.