“You Can Bend Time and Space Within the Film to Create New Meanings”: Editor Aacharee Ungsriwong on The Mountains Are a Dream That Call to Me 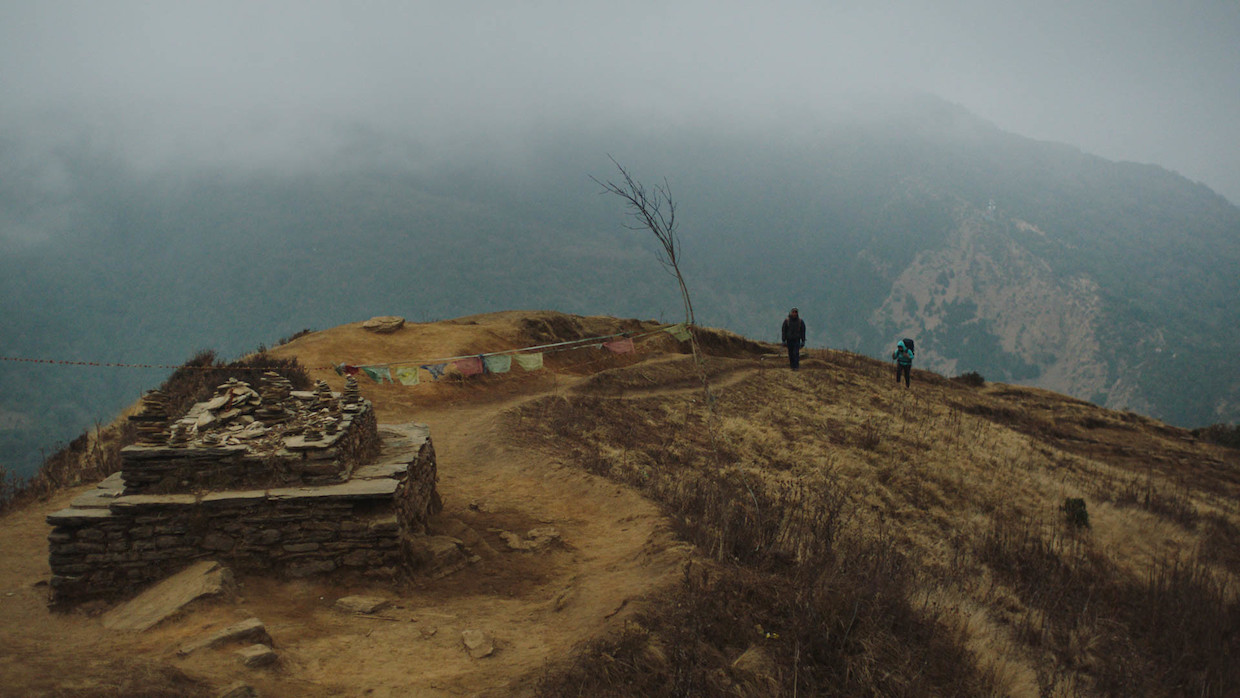 Aacharee Ungsriwong, Sundance, Sundance 2020, Sundance Film Festival, The Mountains Are a Dream that Call to Me

Cedric Cheung-Lau’s The Mountains Are a Dream That Call to Me characterizes landscape in a way that almost seeks to anthropomorphize it. Its central characters, Tukten, a young Nepali man on his way to Dubai and Hannah, an elderly Australian woman traveling on her own, cross paths while traveling in opposite directions on the Annapurna mountains. Their relationship is fleeting, but the Nepali mountain range holds a heightened command of the narrative. Taking great influence in part from the dreamscape style of Apichatpong Weerasethakul, Editor Aacharee Ungsriwong speaks about the creative nuances of the film.

Ungsriwong: Director Cedric Cheung-Lau loves Apichatpong’s films, so he sought out Lee who edited many of Apichatpong’s films. Lee read the script and really liked it but, due to scheduling conflicts, he didn’t have time to edit the film alone, so he asked me if I could collaborate with him. We had edited another feature film together before (By the Time It Gets Dark directed by Anocha Suwichakornpong) and that was a wonderful relationship, so after speaking with Cedric, I was brought on.

Ungsriwong: For me, the goal of editing every film is the same—to help the film be what it is supposed to be by combining the director’s visions with the available materials. For this film, I wanted to enhance the majestic mountains and preserve the rawness of the landscape while still allowing for the characters’ story to resonate.  As for reshaping the film, we took out a lot of narrative elements that we didn’t feel worked within the film we were sculpting. We did a lot of writing in the editing room, in the sense that what we began to understand is that the film is really guided by an emotion, so we had to experiment a lot structurally to find a rhythm and language that spoke to this feeling.

Ungsriwong: Despite the distance, we worked very closely with Cedric. We had a lot of Skype meetings and screen-sharing sessions when we first started building the skeleton of the film. After we designed the initial framework of the film, we worked a lot quicker because the ideas were able to bounce back and forth. What was important to us was how we felt when we watched the film, even though the feelings were abstract, we really had to let our emotions guide us. In such a subtle film, we had to trust these instincts and let that shape the film. We tried a few different techniques and tactics, and had a few feedback screenings that were really helpful, but ultimately, we just really trusted what the three of us were feeling.

Ungsriwong: I started making my own short films when I was 15 after watching Nobody Knows (directed by Hirokazu Kore-eda). That film showed me that cinema is not just blockbuster films. Not that there’s anything wrong with blockbuster films—I love many of them and hopefully will get to edit them one day. Nobody Knows just moved me in a way I never felt before. After doing my own studies on filmmaking, I was drawn to editing because it’s such a powerful craft—you can bend time and space within the film to create new meanings. A few years later, I got an opportunity to assist Lee when he was editing Apichatpong’s Uncle Boonmee Who Can Recall His Past Lives, which won the Palme d’Or at the Cannes Film Festival. I’ve learned so much from Lee for over 10 years now. He believed in me and recommended me to many directors. That’s how my editing career started. He is one of the biggest influences in my work.

Ungsriwong: We used FCPX because we believed it would be the most suitable for the project.

Ungsriwong: I can’t think of any particular scenes that were particularly challenging, and in fact one of the things that we discussed early on was that the entire film was one scene, or should feel like one in the way that it flows seamlessly from one space to another. It was particularly challenging to maintain this idea and this flow in the second half of the film.

Ungsriwong: The film ended up different from the script, so the meaning of the film has evolved, though the overall mood and tone are quite similar to what I had in my head. I won’t say what the film means to me though, as I feel that it has a different meaning for everyone and I do not want to influence that. You just have to relax and let the film take you.