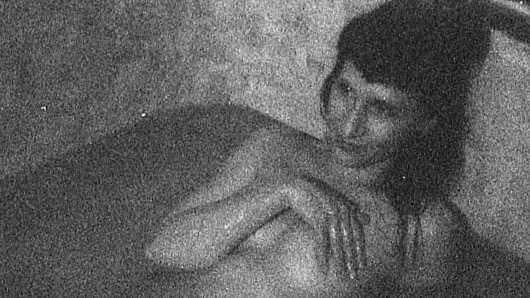 This is the first line of voice-over spoken in French across the opening seconds of black that launch While I’m Still Breathing (Tandis que je respire encore), a 12-minute short film playing in Sundance New Frontier by a creative collective that includes writer and actress Laure Giappiconi; sound and performance artist Elisa Monteil; and photographer and filmmaker La Fille Renne.

The voice, a woman’s, speaks over a whirl of black and white grain in a medium shot showing a woman standing against a horizon of black tree trunks and blurred branches. The images are a montage of stills quivering and stuttering, and the speckled footage nearly dissolves the difference between figure and ground.

And yet, the figure is undressing, so we look more closely. The black coat is shaken off to reveal fetching underwear, which, too, is removed as the speaker ponders the desire to disrobe, to pose, to be seen by others. The questioning unravels easy voyeurism, especially as the woman admits a desire to achieve youthful immortality prior to the inevitability of aging and death.

“I began to make movies after meeting La Fille Renne, a film photographer,” explains Laure Giappiconi, who wrote the film and is the woman featured in the opening sequences. She explains that the project is based on a text written by Giappiconi. Then the film was shot using a $50 hand-cranked LomoKino, one of a suite of analog plastic cameras from the Lomographic collection that shoots silent 35mm in 144-frame segments (which is about six seconds at 24 fps).

“La Fille Renne works almost as a chemist,” Giappiconi says. “She loves double exposure or special treatments when she processes films. And she processes them in her bathroom, then scans the images – 2600 photos! – and we edit everything on the computer.” The sound design was created by Elisa Monteil, and includes a gentle mix of atmospheric musical elements, sound effects and the voice-over.

The toy camera and bathroom-based processing together explain the dreamy fluidity of the imagery. When asked about the appeal of this handmade, analog process used by La Fille Renne, Giappiconi explains, “In her photos, you can see different stratas, and it’s something really timeless but also really concrete. It’s one of the things I find really rich in analog photography: the materiality of the pictures.”

The filmmakers of While I’m Still Breathing are not alone in their fascination with materiality and analog filmmaking techniques. Many contemporary film artists have returned to the chemicals, emulsion, hand-processing and old cameras from the past. Kathryn Ramsey’s 2013 book Experimental Filmmaking: A Guide to Experimental Processes With Film and Video offers a terrific introduction to a variety of such techniques, from cameraless filmmaking to eco-processing, while Greg Zinman’s new book, Making Images Move: Handmade Cinema and the Other Arts, charts a historical context and evolution of this practice across nearly 120 years of filmmaking. For many artists using these analog techniques now, the tactility and physicality of film and the serendipitous results of hand-processing can serve as an appealing refusal of a deluge of digital imagery and its lack of a clear connection to the physical world.

For Giappiconi, the handmade aesthetic is also rooted in a longer history of cinema. “When I was a child, there was no TV or computer at home,” she says. “I grew up in the art-house cinemas of the Quartier Latin, in Paris, seeing a lot of old movies. For instance, Chris Marker’s La Jetée, Jean-Luc Godard’s Une femme est une femme or Nelly Kaplan’s La Fiancée du pirate… I quote the first that come to my mind but there are so many! As a human being and an artist, I’ve been made by all the movies I saw.”

Giappiconi says that a return to an older way of seeing, at a moment when we are inundated by images, “renews our sight.” She notes, “Shooting on film is not about nostalgia or a tribute to the past. It’s about the certitude that this special media will sustain at best what we want to tell with our movies. It’s about dreams, intimacy, sensuality and souvenirs…”

While Giappiconi may find that renewal of sight to be central, what makes the film compelling is not entirely visual. Instead, it’s the riveting assertion of the power of pleasure announced in the film’s second section, shot in a bathtub. Yes, we see a watery display of sexy self-gratification, again in a fuzzy, stuttery blur, but it is Giappiconi’s verbal description of a first orgasm – “I am powerful and light,” she says – followed by what she would do to reignite that same shudder of pleasure that is truly exhilarating.

While I’m Still Breathing is also an act of reclamation. The garish, brightly lit aesthetic of online porn does not favor subtlety or intrigue, and indeed, works incessantly toward quick satisfaction and through clear categories of sexual interest. In contrast, Giappiconi says that she appreciates the ways in which the grain of the hand-processed 35mm film conjures the softness and texture of human skin. “We live in a hypersexualized society which actually avoids talking about sex,” she says. “The floor is given mainly to men, who present an ultra-normalized and sexist vision of sexuality, for a commercial purpose. We find that it is urgent that artists deal with the subject, in a feminist and political way! And so we do it!”