“Not Playing Any Moment Expressly for Laughs Without Emotion”: Editor Robert Grigsby Wilson on The 40-Year-Old Version 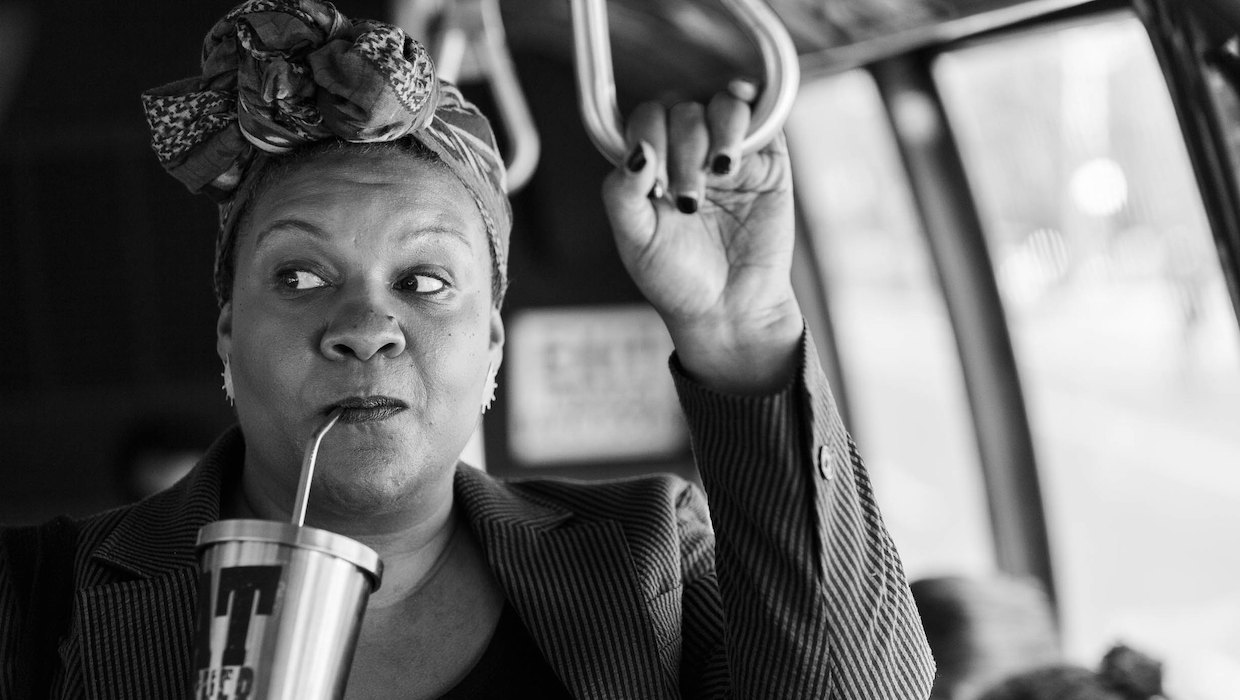 Radha Blank writes, directs and stars in The 40-Year-Old Version, about a woman named Radha who struggles with the stigma of being single and struggling with her art at the age of 40. After what seems like a barrage of rejections from theater companies, Radha finally feels reinvigorated when she revisits her long-forgotten love of rapping. She eventually feels torn when interest is finally shown for a play of hers when she is in the midst of working on a rap demo tape. Editor Robert Grigsby Wilson talks about his own love of hip-hop, his own professional trajectory as an editor and some helpful advice gleaned from Thelma Schoonmaker.

Wilson: Radha and I met and worked together at the 2017 Sundance Directors Labs, where she was developing The 40-Year-Old Version. We bonded over classic hip-hop, classic comedy, and the classic B&W aesthetic of her approach. I think we built a trust that summer together that she wanted to carry over into making the film. I was truly honored that Radha asked me to edit the feature when it came around.

Wilson: From my first assembly, I could tell the film was there. It’s a very exciting feeling when you believe a film is going to work when you first watch it, even though you know there’s work to be done. In the edit, Radha and I spent a lot of time talking about balancing Radha’s head (her career as a playwright) and Radha’s heart (her new creative outlet in hip-hop). Our biggest goal was to pace the different stories equally, to not linger too long in one journey while losing the narrative of the other. Fortunately, Radha had written a tight script which gave us an excellent starting point, so the structure largely remained intact. We also wanted to balance the drama and comedy, not playing any moment expressly for laughs without emotion behind it and not letting any moment in the film take itself too seriously without a good joke in it. It was a lot of fun to cut.

Wilson: For a project this creatively and technically complicated, I had to employ every skill I had developed over the years. My first assembly of every scene was cut with “tap dailies,” which were ProRes proxies recorded by our on-set DIT straight out of our camera eyepiece. With our budget and workflow, there was a four-day turnaround for the digital scans of our B&W film, but with our schedule we couldn’t wait. So I did my first assembly with this ugly footage, and Sam Salvodon, our brilliant and talented assistant editor, had to eye-match and over-cut the entire film—picture and sound—with the film dailies when they arrived, sometimes a week behind camera! I really couldn’t have made this film without him.

In my career, I’ve developed a lot of techniques also for manipulating footage in post, but these abilities were founded in working with digital footage. I found that on this film though I had to re-evaluate my entire approach because there actually is a chemical reaction happening on-screen, twenty-four times a second. Digital movement, artifacts, and interpolation all read much more apparently when you are applying digital effects to an image with true film grain. I had to really stretch my brain to employ my skills while never forgetting that it all had to appear like it was recorded in-camera.

Once we got into the director’s cut, we had many feedback screenings to gauge the audience’s response to certain characters and storylines. I find the most valuable lessons you get from these screenings are not what people say afterwards, but how they react in the moment—be it through some audible response, like laughter, or watching when the audience decides to shift in their seats. All these small clues can tell you whether the film’s pace and moments are working.

When we locked picture, we took every frame in the cut, cleaned the original negative, and re-scanned it at 4K so we could have the most pristine image for our DI. It really put a lot of pressure on us to stick to our schedule and make the right decisions before we locked, because once we did there was no going back. But Radha and I remained focused and the film is better for it.

Wilson: My first job in post was working in movie trailers at Buddha Jones in Los Angeles. The people I worked with there were, and are, some of the best in the business and I learned a lot technically and creatively. But I was eager to work in long-form narrative, so I left the company and started at the bottom again working on large studio features.

My first work as a union assistant editor came just as digital formats like RED and Alexa were making their way into the world and indie films were looking for ways to be nimble technically without sacrificing quality. Fortunately, that skillset led me to assisting some of the best editors to ever do it, like Alan Heim, Craig McKay, Anne McCabe, and Kevin Tent. Their skills with story are unmatched and their demeanor in the cutting room taught me a lot about the importance of being a good collaborator and partner to the director. They also told me to edit everything I could find and I was able to sharpen my skills with their mentorship. A lot of young editors want to skip assisting and go right to cutting, but I’ve found that the lessons I learned working under established editors are invaluable.

When I moved to NYC in 2012, I became firmly entrenched in the indie scene here, mixing editing work on smaller projects and assisting on larger films and TV shows. Some of my editing work got the attention of the Sundance Institute, which led them to invite me to be an editor at the labs. That’s how I met Radha. I’m forever indebted to the Sundance Institute for support in my career.

Wilson: We chose Avid Media Composer because it’s simply the industry standard tool. Working in a shared environment, with different teams in different departments and especially with multiple iterations of the footage, I trusted Avid’s sturdy architecture and reliable workflows, as well as the built-in tools that allowed me to play with the footage without moving into another application. I am platform-agnostic, but I believe there’s the right tool for every job, and Avid is still my weapon of choice.

Wilson: Every scene posed unique challenges, but the scene that we kept reinventing was the scene in the film when D, the DJ that Radha has been working with, takes her to see the Queens Of the Ring, an all-female rap battle event. There are so many layers to the scene, from these dynamic and exciting women battling it out through rhyme, to the crowd’s response to these women, to Radha’s response to these women and the confidence it brings her, and finally to the dynamic between Radha and D, which is getting deeper and more connected during the scene. It’s so crucial to the development of Radha’s character and the story, but we were always battling the length and heightened elements of the scene, trying to keep the pace of the story up but never wavering from the verité style of the film. Right before I did my first cut of this film, I was lucky enough to catch a screening of Raging Bull where I heard Thelma Schoonmaker recount the editing process of that film. That primed me for action on a 35MM B&W scene in a boxing ring!

Wilson: We had incredible collaboration on this film with colorist Nat Jencks, sound supervisor Eric Hirsch, and the incredible team of technicians and artists at Goldcrest in NYC. They helped us through every step of the process, from our first day to our last. Their knowledge, work ethic, and helpfulness are why the film looks and sounds as good as it does, and I am thankful for them signing up to help see us through.

Wilson: From the moment I read the script in 2017, I knew Radha was a brilliant and original voice with an important story to tell, but it wasn’t until we started screening the film for audiences that I saw how important it was. Along with the short film Little Chief, directed by Erica Tremblay, I’ve had the great fortune to edit films by two women of color at Sundance 2020. Being a part of those collaborations specifically has been incredibly rewarding, and working on films that tell stories that are not always represented or reflected on-screen is one of the best parts of this journey for me, and every day that goes by, the value of that grows. These are two amazing films by two amazing filmmakers, and I’m so honored to be a part of both.