“Watching The Battle of Chile Helped Me to Have the Courage to Trust my Intuition…”: Petra Costa on Her Oscar-nominated Doc The Edge of Democracy 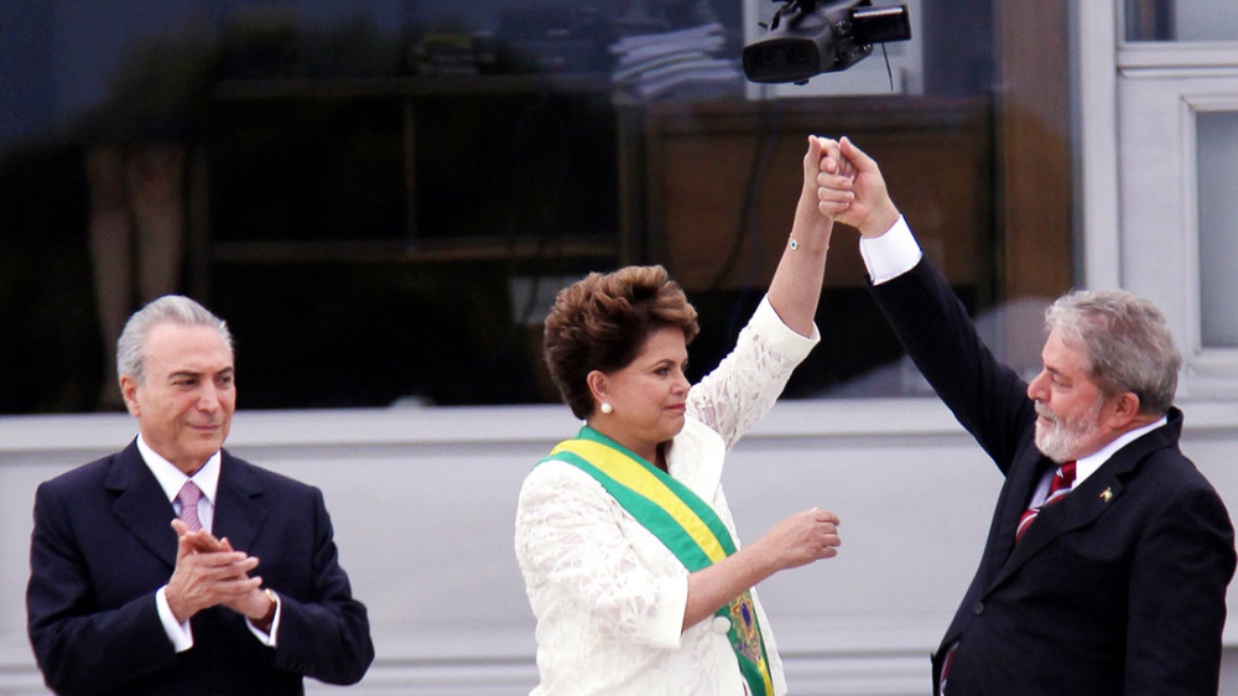 The Edge of Democracy

by Lauren Wissot
in Directors, Interviews, Oscars
on Feb 5, 2020

Access, access, access — be it physical, emotional, or preferably both — is the doc filmmaker’s equivalent of location. And Brazilian director Petra Costa manages to get it in spades. Currently streaming on Netflix, her Oscar-nominated epic The Edge of Democracy, the third film in a personal, award-winning trilogy that began with the 2009 short Undertow Eyes, followed by her debut feature Elena three years later, is easily Costa’s most ambitious to date.

With fly-on-the-wall camerawork, and guided by her eloquent voiceover narration, Costa captures up close and in real time the democratic car wreck of recent corruption scandals in Brazil that led to the impeachment of one president (Dilma Rouseff), the jailing of another (Luiz Inácio Lula da Silva), and the election of a military dictatorship-glorifying strongman (Jair Bolsonaro). And, as if shooting in the presidential palace as the nation’s first female leader’s belongings are unceremoniously packed up, or filming as Lula hunkers down in an office awaiting potential arrest weren’t enough, Costa adds to the drama by deftly weaving in archival images encompassing the country’s fraught history, including her family’s own complicated role in it.

“My grandparents, who were the protagonists of Undertow Eyes, were actually in conflict with my parents for a very long time because of political disagreements, which I reveal in this film,” Costa explained by phone soon after the Academy Award nominations were announced. “While my grandparents supported the military coup, both my parents fought against it and were imprisoned by it, and had many friends tortured and killed.”

“We’re a younger country, and it’s crazy to look at it,” she continued. “There are more presidents that fell than finished their mandates in Brazil. It’s a country built on coup after coup after coup. One of the first coups was after the king and the prince decided to declare the abolition of slavery. That’s when the republic was proclaimed and they were kicked out, because the oligarchs in Brazil were against the abolition of slavery.”

As she went on to explain, “It’s a country built by a few oligarchs, like if slavery in the South in the United States had never been challenged with a civil war. But then the government finally did do affirmative action, and changed the landscape of Brazilian institutions. Today there are more black people in public universities in Brazil than whites. The impeachment and everything else was really a revolt against that as well. I think a question we all have today is, Is this the last scream of agony of white supremacists, or will they actually destroy democracy to be able to maintain power?”

But to contextualize the elite oligarchy Costa claimed as original sin she chose to look far beyond her nation’s borders, not north but south. “The first chapter of Patricio Guzmán’s The Battle of Chile is The Insurrection of the Bourgeoisie. That is precisely what was happening here,” the filmmaker said, citing the renowned Chilean documentarian. “The bourgeoisie was having an insurrection after 13 years of the Workers’ Party. The idea was that if Dilma was not impeached then Lula would be elected, and the Workers’ Party would continue to be in power.”

“It was clearly an insurrection,” she continued. “That was so obvious. My desire at one point was to cut between the right wing protests in The Battle of Chile to our right wing protests, because they were just a copy of each other. But then I saw that what was happening in Brazil was subsiding. And I had a feeling, like, this has all calmed and we’re back to normal.”

Unfortunately, as she was quick to point out, this was not to be. “When six months later the streets exploded in protest I felt that now I have a duty to do what he did. I was really inspired by how he did it, and how he was able to be in the streets, in Congress, and in the presidential palace. So that’s what we were constantly trying to do. I would watch that film with my DP almost every day before going to shoot.”

“I thought about how clearly he put his own point of view in that film, in terms of the analysis of each event,” Costa emphasized. “One thing that everyone here was saying: “You have to be neutral, you have to be neutral.” Or, there was just this shift in the entire media landscape towards a very conservative perspective of everything. Watching The Battle of Chile helped me to have the courage to trust my intuition about what was happening.”

She continued, “In the beginning there was so much doubt, and everyone was trying to kind of prove that what was being done was right. But then there was leak after leak after leak that just revealed so clearly what the real intentions behind the impeachment and Lula’s imprisonment were. There was a leak that came out 21 days after Dilma’s impeachment of the Congressmen saying that she has to be impeached or we’re all going to go to prison. Because she wasn’t stopping Operation Car Wash. And then, there was the leak six months after Lula was imprisoned that shows the prosecutors coordinating with the judge. Lula had to go to prison or else the Workers’ Party would win the election.”

Contemplating that time of nail-biting uncertainty and how she was able to document it, Costa noted, “The most cinematic moment was, of course, Lula’s imprisonment. We’d already built access over three years with Lula by then, so I knew most of the staff that worked with him, and had several points of connection. For three days he was kidnapped inside his own, like, workers union. And the entire country was watching that — while we were inside filming and also looking at that from the televisions. No one knew if he would give himself up, or if the police would invade the building. It was like a thriller.”

As for how Costa was able to wade through what ended up being a daunting, often head-spinning, 10,000 hours worth of footage, she explained, “I was mostly editing in Brazil, though for about three months, or four, I went to Paris to work with this editor, Tina Baz, who works with (Japanese film director) Naomi Kawase. It was great to be able to kind of zoom out of what was happening in Brazil, and have her foreign perspective, and not be intoxicated by the passions here, which were very high. The discussions here could often go into a football cheering mode, for one side or the other. So for me it was really important to look at this from a different, more distant perspective.”

“And in England I worked with Joanna Natasegara, who produced two amazing political films, Virunga and The White Helmets,” Costa continued. “She helped us a lot in getting the facts right, and having a political perspective that would also be less impassioned and more journalistically precise. And in the US, we had producers Shane Boris and Sara Dosa. The production was mainly in Brazil, the US, and the UK. The international help of these people that were working with us was really essential, as were the editors. It’s like how with each article I read about Brazil that is written abroad helps me understand a lot of what is happening here.”

And what happens in Brazil, of course, doesn’t stay in Brazil. As the filmmaker explained, the parallels to the political discourse in the US leading up to the 2016 election were at times uncanny. “There’s the concept of sexism, and how this process was extremely sexist. There were a lot of similarities to what happened to Hillary in many ways. Like the chants of “lock her up,” which was for Lula. Every protest they were saying “lock her up” for Lula. But the sexism that Hillary suffered during the campaign was very similar to what happened to Dilma. It showed how incapable most people still are of respecting female politicians. And then you elect someone who says that women should be raped!”

Though Costa was swift to add that, as in the US, the profit-hungry tech giants were likewise damningly culpable. “I think the reason that this has been unleashed has a lot to do with social media,” she lamented. “People wouldn’t even say that they were right wing before 2013 in Brazil. You would be center or you’d be left. But in 2013 these protests started to happen, and a very strange movement started to happen in social media where these pages supporting far right thought went viral.”

“One of these main pages actually had funding by the Koch brothers,” she then revealed. “It’s called MBL (Free Brazil Movement). One of the leaders got a grant to found Students for Liberty, so that’s also funded by the Koch brothers. So there’s a lot yet to be unveiled about how some companies are possibly paying for these movements in social media that are actually perverting our democracy worldwide.”

As the conversation wound to a close, Costa added what, in retrospect, could only be described as a chilling global warning. “I feel that what is happening is, more than anything, a decision by certain corporations that they’re tired of democracy.”