Looking for the New at the 2020 Sundance New Frontier 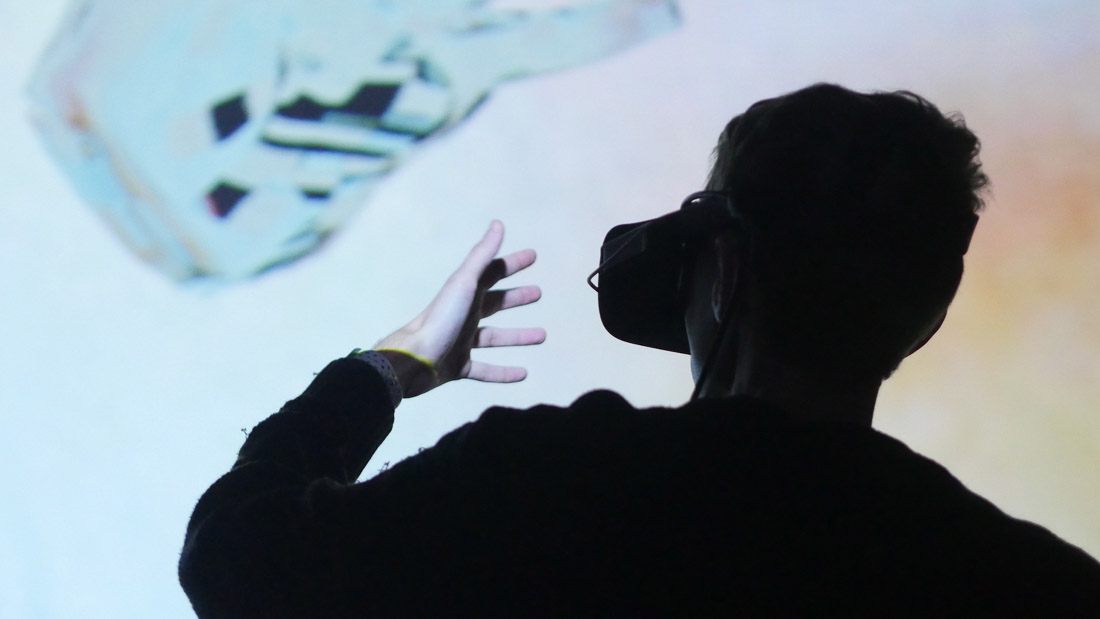 A Machine for Viewing

Like couture as the harbinger of everyday fashion, Sundance positions New Frontier — New Frontier at the Ray, New Frontier Central and the Biodigital Theatre — as the pilot showcase for what is coming down the pike for moving-image storytellers (a likely justification for programming what only relatively few people wearing headsets can experience at a film festival, which, by definition, caters to large audiences).

Begun in 2007 with art installations, Sundance’s New Frontier shifted in 2012 with Nonny de la Pena’s Virtual Reality Hunger in Los Angeles, and now the exhibition portion of NF exclusively shows new technologies. I attend every year to discover those projects that stretch the new media — VR (Virtual Reality), AR (Augmented Reality), AI (Artificial Intelligence), XR (Extended Reality), 360° cinema — to create unique, innovative works that could only be experienced in this new realm, rather than simply using new toys to dress up the conventional.

A Machine for Viewing, a real-time VR performance on the relationship between the audience and the cinema by Oscar Raby, Richard Misek and Charlie Shackleton, voiced a cautionary note. It presented the 3D virtual image of a traditional movie theater and then showed how film pioneer Sergei Eisenstein envisioned the Dynamic Square format, which would have allowed different screen shapes, including vertical, for his Odessa Steps sequence in Battleship Potemkin, rather than the conventional landscape aspect ratio. It was never enacted.

Said Shackleton in the piece, “Like something out of Eisenstein’s worst nightmares, we’ve built the future in the image of the past, and obscured the true promise of this place… as a boundless blank canvas.”

But there are possibilities of a different future, and at its best, the blank canvas can be glimpsed at New Frontier.

Here are the projects I saw this year that took risks by experimenting in form and in content, whether successful or limited — the virtual equivalent of Eisenstein’s hope. Notably, in the interest of fostering experimentation, New Frontier is the only Sundance section that has no awards. Rather, Shari Frilot, New Frontier Chief Curator, wants an atmosphere free of competition to foster inventiveness.

A standout was The Book of Distance by Randall Okita about his grandfather, a Japanese immigrant who was interned during WWII in Canada, his adopted homeland (I was surprised to learn that Canada followed the U.S.’s lead on internment). Truly interactive, you participate by virtually opening a book, tossing a horseshoe, presenting a passport, hammering a fence post, taking a photo — and the story doesn’t progress until you take action. You go through the experience with grandfather Yonezo, listen to his son’s recollections and hear grandson Randall’s first-person narration. It is a lyrical, personal and moving story told with stylized figures in a 360° landscape.

Scarecrow starts with an acknowledgement of early media with a 2D silent B&W film, then shadow puppets, before launching into the interactive. You are then thrust into, writes Sundance, a “one-on-one VR immersive theater piece [that] converges gaming, thermal haptic, dance, and painting” by lead artists Jihyun Jung, Sngmoo Lee. Taewan Jeong and Cooper Yoo. You must help the scarecrows, whose hearts have been removed, from swarming birds. An actor, who appears as a virtual scarecrow, dances with you, encourages you to draw colored lines with your haptic gloves which get hot and cold, and hugs you. You really are transported to another realm, and the live partner changes the equation.

Interestingly, “immersive theater” also appeared with the U.K. National Theatre’s All Kinds of Limbo, a concert performance by singer Nubiya Brandon, who is a lead artist along with composer Raffy Bushman and Head of Digital Development Toby Coffey at their Immersive Storytelling Studio, which creates VR experiences. (In 2019, NF featured the Royal Shakespeare Company’s Seven Ages of Man, and I’m told they are working on a VR A Midsummer Night’s Dream this year, and Frilot says Britain is leading the way with public subsidy. I’m watching to see how VR coming from the live performance realm differs from work by filmmakers.) Here, All Kinds of Limbo featured volumetric capture, a technique also being developed by Intel and Microsoft, and featured 14 costume changes and the ability to stand right next to the performer in what was otherwise a conventional concert.

Perhaps the best example of the difference between a linear film and VR at New Frontier this year was Persuasion Machines, a direct outgrowth of The Great Hack, the film screened at Sundance last year about Cambridge Analytica’s interference in the 2016 U.S. presidential election and Brexit. The Great Hack co-filmmaker Karim Amer teamed with architect/technologist Güvenç Özel to take the same Facebook data gathered by Cambridge Analytical and craft it into Persuasion Machine’s virtual world. You begin in a familiar surrounding, a living room where you click on the TV, the iPad and phone and agree to the “terms and conditions.” You are then led through an archway where personal data made graphic surrounds and flies past you. It’s a visceral, emotional wakeup call to how your own information is being used and manipulated. Interestingly, Hillary Clinton, a victim in The Great Hack, and who was at the festival accompanying Nanette Burstein’s doc portrait, Hillary, visited Persuasion Machines and talked to co-lead artist Karim Amer at length.

Chomsky vs. Chomsky: First Encounter also uses existing material but here producer Sandra Rodriguez deployed it in “conversational AI” where you ask questions to the father of modern linguistics, Noam Chomsky — also a philosopher, cognitive scientist, social critic, and political activist — has spoken on a wide range of subjects, so you can ask about anything and the answers are pulled from his recordings. Although my questions did not mention food or dating, I got answers on these subjects, so the work is still in an early stage.

Breathe gives physical form to your own breathe via a belt wrapped around your torso and viewed through a Magic Leap head-mounted virtual retinal display, writes Sundance, “superimposes 3D computer-generated imagery over real world objects, by ‘projecting a digital light field into the user’s eye.'” Created by artist and scientist Diego Galafassi, you move through space and play with your own vapors created through biometrics (body measurements).

Also in the corporeal realm was Spaced Out, which takes place in a swimming pool. You lie in a dead-man’s float using a VR goggles, earphones and snorkel to take a trip to the moon inspired by the 1902 Georges Méliès film A Trip to the Moon heard along with Neil Armstrong in NASA Apollo 11 audio recordings. Creator Pyaré (the artist Pierre Friquett) says floating is meant to make you feel weightless, but I found it hard to forget I was in cold water. I also wondered why you needed a real pool when VR can place you anywhere. This is one piece that could have used 360° but it was only a 2D underwater flat screen. Still, it was an unusual experiment.

The pool might have been a welcome venue for those in the 360° film, VR Free by Milad Tangshir. Jailed Italian prisoners in Turin are given VR headsets so they can imagine themselves back in their un-incarcerated lives, at work, at home, and at play. Then, they are back in their bleak prison cells.

Atomu indirectly addresses an illegal act in Kenya — homosexuality — by using a local Kikuyu tribal myth. A giant sacred tree stands at the center; if one walks around it seven times, a man may become a woman and a woman may become a man. The artists Shariffa Ali and Yetunde Dada plan to bring this work across Africa as a form of activism. The is also one of PBS’s POV Spark’s African Interactive Arts Residency inaugural projects.

Another form of engagement was Metamorphic, an open-ended digital playground where you walk through a mirror, encounter your own avatar who you can can touch, dance with and engage with other avatars in a virtual community driven by people and code. In this work by Matthew Niederhauser, Wesley Allsbrook, Elie Zananiri and John Fitzgerald, your actions change the environment.