“I Don’t Want to Work in a Place Where I Can’t Touch the Camera”: Gerardo Naranjo on Tribeca 2020 Premiere Kokoloko 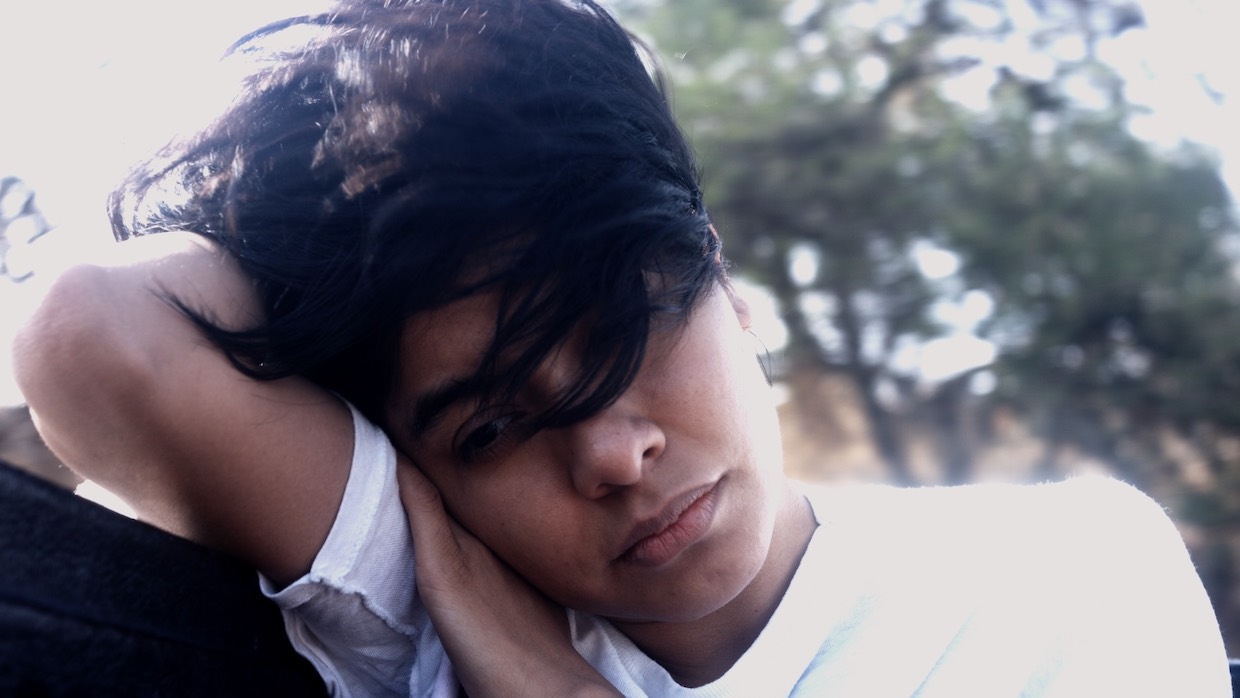 by Vadim Rizov
in Directors, Festivals & Events, Interviews
on Apr 23, 2020

A girl, a number of guns, also some cars: recombining knowingly archetypal elements from Gerardo Naranjo’s first two features, Drama/Mex and I’m Gonna Explode, Kokoloko is delightfully loose and unconstrained. In Oaxaca, Marisol (Alejandra Herrera) loves Mundo (Noé Hernández), much to the disapproval of her thuggish cousin Mauro (Eduardo Mendizábal), who literally picks her up and throws her in his car to separate the two. The not-quite-love-triangle unfolds in a larger, equally unsettled arena: road blockades are plotted, cartels are in orbit, and violence erupts at every level. The beachside backdrop recalls the Acapulco setting of Drama/Mex, Marisol and Mundo’s lovers-on-the-run arc I’m Gonna Explode‘s teen fugitives. Once again synthesizing the spirits of Gun Crazy (low-budget innovation in a noir framework) and Pierrot Le Fou (extremely, sometimes comically extreme melodramatic gestures, driving an emotional car into the metaphorical ocean with self-awareness), Kokoloko resembles Naranjo’s first two films much more than the claustrophobic action setpieces of his last feature, 2011’s Miss Bala.

Naranjo co-edited and co-shot Kokoloko, indulging moments of visual abstraction that zone out from the main plot. When the storyline actively takes over, it’s lively: the trailer teases a machete fight that does not oversell what’s in the film, while at another point the lovers spend hours having reunion sex rather than trying to flee their pursuers, with predictably unfortunate results. This is boisterous, untethered, hand-made/-held filmmaking where no emotional extreme (that’s realizable within the constraints of a relatively-low budget context) is off the table. Kokoloko is one of two features with a 2020 date on Naranjo’s IMDb page; the other, Viena and the Fantomes, is a band-on-the-road drama starring Evan Rachel Wood, Dakota Fanning and Zoë Kravitz. Release dates in both cases are uncertain, but Naranjo got on the phone to talk through Kokoloko, which premiered at this year’s Tribeca Film Festival, although it is not entirely clear what that means.

Filmmaker: Miss Bala involved a lot of choreographed action and precision, then you directed episodes of Narcos and Fear the Walking Dead. I’m wondering when, during that latter period of work-for-hire, you started thinking about returning to feature films, and what, if anything, you learned from working on these larger productions that you brought to Kokoloko, or whether you were relieved not to have to deal with that anymore because you had much more hands-on control.

Naranjo: I’m currently working on bigger films, and hopefully I’ll do my Hollywood fare, but certainly this one, after trying so much—you know, I was developing movies in Hollywood and none of them were going ahead. They were ambitious, so I feel Kokoloko was, in a way, a cure, something that could be possible, that I could do with my hands, my colleagues, friends. It took me four years to finish it because of that. It’s been an ongoing passion project. In my eyes, the origin [was when] I talked to [actor] Noé [Hernández] about doing a violent film that would explain the emotional education of a killer. We were talking about how we see so many stories about dead people. I was like, “What if we try to [show] the heartbreak that one of these killers had—Chapo, if you want?” Noé, in the movie, is not Chapo, but in the end he’s a killer, a soldier who has no heart.

Filmmaker: What was it like to be your own cinematographer again for the first time since [Azazel Jacobs’s 2005] The GoodTimesKid [on which Naranjo was one of three DPs]?

Naranjo: Oh my god! It’s harder and harder for a director to be in touch with the camera. It happened to me on the TV shows. There were instructions from above for the director not to get close to the cameras, because [otherwise] I would put my fingers on it, you know? I grew up like that: touching the camera, moving it, operating it. That was my formation as a filmmaker. On a certain day, something happened in the digital revolution that suddenly I cannot get close to the camera. I don’t want to work in a place where I can’t touch the camera, I think that’s ridiculous. With this, I wanted to be definitive about it. I’m a technical person.

Filmmaker: How long did it actually take to shoot?

Naranjo: The main shoot was in 2016. Imagine. It went for a long time, many times I felt lost. It was looser. The nature of the freedom I had, I wanted to use it to be poetic, to not be completely narrative at times. I’ve been editing slowly. There was no production company—Dinatron is a company with my partner, Gabriel [Garcia Nava]. We didn’t get funded by anybody, not that we went out. We did four shoots, then a lot of editing. At some point it was going to be a long piece, then I decided against it—it was going to be more difficult to distribute. It has been sitting on the computers in our houses forever, so there was no rush until somebody loved it. We had Match Factory, who were excited about the movie but told us to be very patient, because we needed somebody who really liked the movie, because it would divide opinions. Then we showed it to [Tribeca programmer] Frédéric [Boyer]. When Frédéric saw it, we knew it was time to finish it, to take it out of the computer. You know, we had some interesting reactions to the film. Certainly you cannot be in the middle. You like it or hate it.

Naranjo: I don’t know! There’s skin, there’s an interest in the human body, and I feel we were very concerned about this being OK in today’s world. So, we paid attention to not exploit the actress’s body and look more toward the body of Noé, the male actor, and hopefully to neutralize the exploitative side. I hope no one sees the film for the nudity side. I don’t know if it’s even pleasant to look at.

Filmmaker: Drama/Mex and I’m Gonna Explode both had a good amount of sex, but what’s changed since those films is having intimacy coaches on set. Did you have those?

Naranjo: There was no nudity rider. It was more in the old style, where a number of filmmakers get together and are trying to be respectful of the process. I had the great benefit of having Noé; I don’t know if US audiences know him, but he’s [won] the Mexican Academy Award I don’t know how many times. He’s a great actor. Noé’s generosity was truly towards the process. We knew there was going to be a sex scene, and we would have to go very strictly about it. There would be no playing around. So, in that sense, I distanced myself from talking to the actress specifically about it. I didn’t care what would happen, I just told her I really needed something that came out of her. The sex scenes were a gift from the actors to me: something I asked [for], something they did. I think they planned it very much between them. They knew I wanted to go in one take, to go chronologically, and we wouldn’t stop. I adapted to whatever they told me: “We are going to start here and go like that.”

Filmmaker: Can you explain the 16mm and 4K split that’s noted in the end credits?

Naranjo: We didn’t want to showcase the 4K, we wanted to be honest and say that our raw stock ended. We ran out of film, and we had to sacrifice and shoot certain things in 4K. I didn’t want to go out and say “This is a 16mm film,” and then some wise person says that there were two shots in 4K, you know? We built two PCs. The whole idea was to make the film ourselves and not go to a post-production company. So we built the computers, naively—I will never do that again—and did post in our house. [The film was scanned] by a lab in HD. We didn’t want to go 2K. They offered to upgrade, but we were so in love with the HD version that we just bumped the HD to 2K. The negative looked different in 2K. They showed me a number of filters that you do when you scan, but when we went to 2K I didn’t want it. The motion was better in HD.

Filmmaker: I have two more questions and they’re both obvious. The first is, what’s going on with Viena and the Fantomes?

Naranjo: I heard it’s coming out.

Filmmaker: Are you done with that?

Filmmaker: Do you know why it’s coming out now? Is there anything else you want to say about that?

Naranjo: No! No, no. I feel when the movie comes out, the producers will tell a lot of things.

Filmmaker: Got it! The other question is, this film was going to premiere at Tribeca. At some point, you realized that wasn’t going to happen, and now we’re in a phantom marketplace where I’m interviewing you to help, in part, generate publicity for a film that very few people can see except for sales purposes. How are you adjusting to that? Are you letting other people make decisions about how best to handle this, or do you have a strong feeling about what should be done?

Naranjo: Listen, I have a very strong point of view on that. Festivals and film-lovers in general betrayed film. I feel film was dead before this. People are reflecting that they are watching trash, so hopefully they can come back to the good stuff that is film. There’s never been a better time for good craftsmanship. I’m just optimistic that this whole thing will take the sense that we can go into a black room and dream together. I feel we’ve been forgetting that for a long time already.