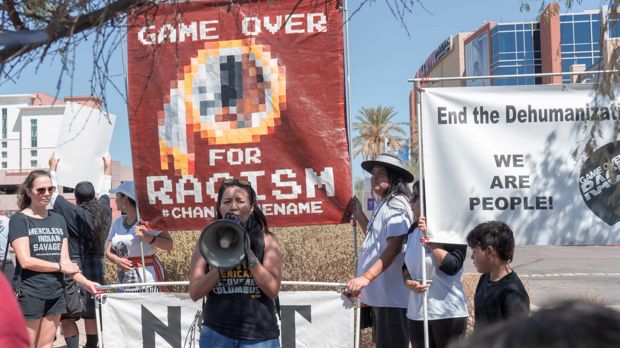 In the past few days trademarks and brands like Aunt Jemima, Uncle Ben’s and Eskimo Pie have been discontinued or altered in a long overdue reevaluation of racist stereotypes and iconography in American consumer culture. And the broader groundswell of change that finally got these brands removed — along with numerous other changes in everything from Congressional legislation on police reform to NASCAR banning the Confederate battle flag — seems poised to challenge one of the most infamous cases of corporate use of derogatory imagery, the Washington Redskins.

Activists have long protested the use of a racial slur as an NFL mascot in the nation’s capital, but team management — and many fans — have resisted calls to change. This prompted a diverse team of filmmakers, led by co-directors Aviva Kempner and Ben West, to create a feature-length documentary called Imagining the Indian to make the case that it’s beyond time for a new mascot. West is a Cheyenne filmmaker and Kempner a storied documentarian whose films have dealt extensively with anti-Semitism and baseball; together the pair recently completed a narrative screenplay about Navajo activist Larry Casuse, which helped prime them to work together on this nonfiction project. Rounding out the producing team are filmmaker Sam Bardley and Washington Post/ESPN contributor Kevin Blackistone, with the Yocha Dehe Wintun Nation in California functioning as executive producer.

And the timing, apparently, could not be better. Last week a small monument to George Marshall, the team’s original owner, was spray painted with the words “change the name” and had to be removed from RFK Stadium where the team plays, and the public seems increasingly aware of the issue. Despite the extreme setback of the coronavirus pandemic, most of the production was already finished, placing the team in a good position to finish shooting and editing in time to take advantage of the present moment with its increased public willingness to dismantle instruments of systemic racism. Early buzz about the film is that it could have a similar affect on the NFL that Super Size Me and Blackfish did on McDonald’s and Sea World, with a change to the team’s name as an ultimate goal.

Accordingly, a trailer was released last week, and the film has begun exposure in forums like California Native American Day and the Sundance Institute’s Inaugural Indigenous Filmmakers Lounge. The filmmaking team is currently raising funds for finishing and distribution.

Filmmaker: The use of Native American mascots has been an issue for a long time. Why was it important to you to make this film now?

West: It is, and has been, important to make this film, and now is as good an occasion as any. The issue is centuries old and, though the needle has moved in some instances, it has not in others. In the wake of the murders of George Floyd and many other Black men and women, the time for change in general is ripe, and my hope is that real, substantial progress on numerous fronts is on the horizon. Native American mascoting is one of a multitude of cultural problems that must be addressed, and that is what we intend to do with Imagining the Indian. We hope to gain the support of other social justice movements, just as we support others in this time of collective reflection.

Filmmaker: How did the project come together in terms of the team, financing, and sponsorship?

West: Producers Kevin Blackistone and Sam Bardley brought this project to Aviva Kempner a few years back and Aviva, in turn, brought me into the fold. At that point Aviva and I were working on a feature script about the life of Navajo activist Larry Casuse. Kevin, Sam, Aviva, and I all had our personal experiences with race and discrimination, and are all sports fans, so the team gelled immediately. Aviva likes to point out that it is likely no coincidence that the four core members of the filmmaking team are all minorities with genocide or slavery in our pasts. I then had the idea to approach friend and Native advocate Marshall McKay, who is Chairman Emeritus of Yocha Dehe Wintun Nation, a tribe in Yolo County, Northern California. Marshall was instrumental in connecting us with others there and that is where our partnership with the tribe was born. In addition to a generous seed grant to get Imagining the Indian started, Yocha Dehe has been unwavering in its support of both the overall cause and the film. We could not have asked for a better partner and Lead Executive Producer on the film.

Filmmaker: With that team, can you talk about your experience collaborating as co-directors? It seems like you may each have an expertise that complements the other.

Kempner: Making films is always a result of solid collaborative efforts. When my friend, sports columnist Kevin Blackistone, asked me to join him and filmmaker Sam Bardley to make this film about the insidious use of Native American imagery, I immediately said I was game if Ben West was part of the team. The two of us has already had a great experience co-writing a dramatic script on Navajo activist Larry Casuse, who I had done political work with when I was in VISTA in New Mexico in the early ’70s.

We had already established a great rapport in developing this dramatic script and bridged that positive working relationship into making this contemporary political film. Ben brings a talented dramatic screenwriting viewpoint and a lifetime perspective of being brought up sensitive and respectful to Native American issues. And I have 40 years’ experience in making historical documentaries about under-known Jewish heroes fighting anti-Semitism, fascism, racism, and sexism.

Our shooting logistics benefit from the fact that we live on two different coasts — Ben in LA and me in Washington, D.C. If both of us cannot make all the shoots we trust the other one to conduct the interviews after all of us producers have collaborated on the questions. Thanks to Zoom and phones we are all able to confer before shoots. Also, we both travel often to each other’s coast for some of the shoots. The same is true of going over the edited material with the editor and assistant editor.

It also helps that Ben and I share a wicked sense of humor and that all four of us strive to provide an honest depiction of the movement charged to stop the insulting depictions of Native Americans.

Luckily, we are covering the cultural abuses in all the sports because the three male producers and one male associate producer are all devoted football fans, which is not a sport I follow. But I have observed through the decades the movement to change the Washington football team’s name. And I make up for it by being a baseball aficionado and having made two baseball-themed movies. That expertise is important because at least two MLB teams have been called upon to stop using insulting mascots. The Atlanta Braves are proving to be stubborn about stopping the use of the tomahawk chops as cheering vehicles at their games.

Filmmaker: Your production got caught in the coronavirus shutdown. How have you responded to the pandemic?

Kempner: We are all saddened to read about those who have passed away from the virus, especially the large numbers in the African American and Native American communities. As we already had a trailer and work in progress completed when the virus hit we have directed our efforts to constructing a website to inform the public to the issues and as a conduit to fundraising. The website not only features information on the film, but we also include a news section that highlights developments in the mascoting movement and current events, especially as they pertain to what’s going on with Native communities.

In addition, we are consulting with our director of photography about how to go about shooting once we raise some more funding. We are focusing on fundraising now so we can complete the film for entry to the Sundance Film Festival, which features docs on Native Americans.

Filmmaker: So Sundance is a goal, and given the uncertainty but also the political importance of this moment how else are you hoping to manage the film’s release?

Kempner: We are working 24-7 to raising the remaining funding so that we finish and release the film in early 2021 when there will be a heightened consciousness of the negative effects of mascoting, and what we hope is a continued push in the direction of change.

Filmmaker: The coronavirus has hit the Navajo Nation and many other tribes especially hard; what have you thought about its press coverage and the broader nation’s awareness of the crisis? I ask because it feels, from my outside perspective, like a similar dynamic with the NFL: that public engagement with the issue is far below what it could or should be.

West: COVID-19 has indeed affected many Native communities disproportionately, Navajo Nation especially, not to mention other minority groups. A word that we have heard repeatedly in making Imagining the Indian is “dehumanization.” That is what negative stereotyping does — it dehumanizes people — and it is something that has been happening to Native Americans since Europe set foot on Native soil centuries ago. When you do not think of your fellow man or woman as a true human being of equality, be it consciously or subconsciously, then it follows logically that it would be hard to think of their problems as real ones that need solving. As a result, it is not surprising that coverage of the coronavirus, or mascoting issues, or any other, might not be as extensive as the topic warrants. I would add to this that it is essential to keep in mind that Native Americans are a living, breathing, contemporary culture. Yes, there are rich and important histories to be explored there, but we must remember to think of Indigenous people in the present as well as the past tense. So often we are portrayed as relics, artifacts. We have had multiple interview subjects relate stories in which someone they encountered was stunned because he or she “didn’t know Indians still existed.” Just think about that for a second.