Hirokazu Kore-eda on the Lightness of Catherine Deneuve, Long Takes and Shooting The Truth 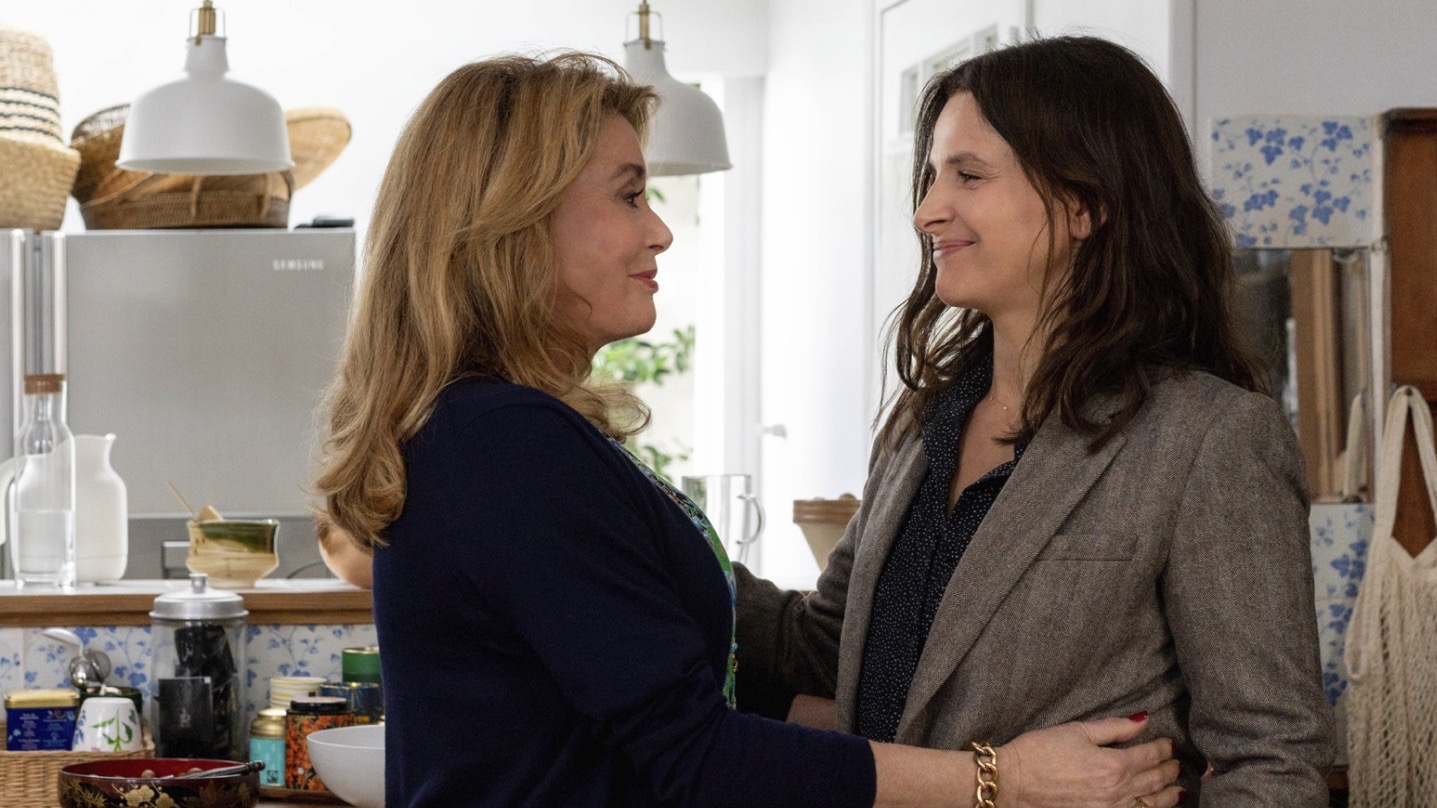 by Daniel Eagan
in Directors, Interviews
on Jul 3, 2020

Hirokazu Kore-eda became one of world cinema’s leading directors in a series of films that over 20 years have examined family life with uncanny insight and sensitivity. After winning the Palme d’Or at the 71st Cannes Film Festival for Shoplifters, Kore-eda wrote, directed and edited The Truth (La Vérité), his first foreign-language feature. Starring Catherine Deneuve as Fabienne, a renowned French movie star, and Juliette Binoche as her daughter Lumir, a writer, the movie explores their relationship during the shooting of an art-house film. Ethan Hawke plays Hank, Lumir’s husband, an actor and recovering alcoholic.

The Truth screened at the Venice Film Festival in 2019. It screens virtually starting July 3. Filmmaker spoke with Kore-eda by phone earlier this spring. Thanks to Linda Hoaglund for translating.

Filmmaker: Can you talk about how this project started?

Kore-eda: It began 17 years ago. At the time I was just starting out as a director and I didn’t have an extensive career yet. Originally I wrote it as a play. I was writing to explore what it means to act.

I adapted it significantly in order to make it in France. When Catherine Deneuve agreed to appear, I conducted a long interview with her about her own career. So her own experiences and emotions are definitely reflected in the final film.

Filmmaker: How did casting Deneuve affect the development of her character?

Kore-eda: Catherine Deneuve has a kind of lightness to her as an actress. There’s a rhythm and musicality to her delivery that I hope I was able to reflect in the characterization on screen. That being said, Catherine Deneuve was quite clear from the beginning that she was nothing like Fabienne. So she was able to distance herself from the character and sort of chuckle about her. Right before each take she would say, “If I say this, everybody will hate me,” and then go ahead and do it.

Filmmaker: Fabienne is a fascinating character, self-absorbed but charming, and with incredible skills. How self-aware is she about her behavior?

Kore-eda: I think she’s quite self-aware. She does what she does knowing exactly what she’s doing.

Filmmaker: How much of The Truth is scripted and how much is improvised?

Kore-eda: I took the same approach that I take to all my films. That is, I film and then I edit, and then I go back and rewrite the script based on the day’s filming. In that sense it was entirely scripted, but I adapted the script along the way based on the performances.

Filmmaker: In an interview Ethan Hawke said he collaborated with you in improvising with Clémentine Grenier, who plays his young daughter Charlotte.

Kore-eda: As you know I’ve directed many children, but I never teach them a script. I always just explain the situation to them when we’re filming. With Ethan, I explained to him the kind of emotions or reactions I wanted to elicit from Clémentine and then essentially let him be a kind of screen doppelgänger as a director. I really left it up to him to kind of direct Clémentine while acting his own performance.

Filmmaker: Hawke said you would give him suggestions, like how it felt to cut Clémentine’s umbilical cord.

Kore-eda: That’s absolutely true. And when I did, he would say, “Sure, leave it to me, I’m very comfortable doing this because that’s how I work with Richard Linklater.”

Filmmaker: Juliette Binoche has a difficult role, each person in her life makes different demands on her.

Kore-eda: Fortunately her chemistry with Ethan was lovely. When she was performing with him, she would just get softer and gentler. This was her first time working with Catherine Deneuve, so in the beginning I think she was slightly nervous. Even though they’re totally different types of performers, they also had a lovely chemistry working together.

Filmmaker: You have these complex scenes in The Truth, with several layers of action. Take a family dinner scene with Fabienne’s ex-husband Pierre [Roger Van Hool] and her current husband Jacques [Christian Cahay]. How do you maintain the right tone over several camera set ups, especially when the performers are so emotionally vulnerable?

Kore-eda: It’s a tough question. I wonder what I did. I guess all I can say is that it took two days to film the full scene. And since I knew how important that scene was, I guess all I can say is I did my homework. So it was all shot with just one camera, but first we did a reading with all the characters. And then in the house itself we spent half a day rehearsing and blocking, trying to figure it out. It’s a very central scene, so I really spent a lot of time preparing for it. I think I got it right. What happened was we basically shot the scene on the first day, and on the second day, because I had edited the night before, I was able to go back and create supplementary shots that I realized were missing from the rough edit.

Filmmaker: Can you talk about collaborating with DP Eric Gautier?

Kore-eda: Originally I had thought the camerawork in the film it would be much quieter. Less movement, I suppose, in a way. So that was reflected in the storyboards I initially brought for Eric to look at. But what I discovered is that you can do things in large French houses that you can’t do in Japanese ones, which tend to have pillars and steps up and down to different levels. For instance, Eric was able to have a really nice dolly shot across two large rooms, and do it with great agility. So now I think I’m grateful to him for helping keep the movie from becoming too quiet.

Filmmaker: So when you’re blocking the scene where Lumir and Hank first enter Fabienne’s home, you know they would end up in front of a refrigerator covered with family photos?

Kore-eda: Yes, I did anticipate or plan that the two of them would end there, but Eric was able to pull it off with far fewer cuts than I envisioned. But usually we only agreed to the start frame of shots. Eric was constantly working from there to eliminate cuts, to make all of the camera moves longer than I had felt possible.

Filmmaker: Do longer shots help with your editing?

Kore-eda: Yes, definitely, Eric really helped me that way. It was a new editing experience for me. I had an opportunity to talk to François Ozon before I started production, and he told me his experience making a film in a language he didn’t understand. He said, “I don’t think you’ll have too much trouble while you’re filming, but editing is going to be tough.” And he was absolutely right.

It’s very difficult to judge cutting, especially when to end shots, when to cut in the dialogue, when to introduce the next character’s response. I had my thoroughly bilingual interpreter join me in the cutting room throughout the editing process, because it was so hard for me to judge.

Filmmaker: How long was the edit?

Kore-eda: Well, I edited every day during the shoot. And then it took another six months after we finished filming.

Filmmaker: So you have 17 years for script, you shot for several weeks, and six months for editing, yet The Truth still feels as light as air.

Kore-eda: That was my goal. I wanted this film to feel gentle and refreshing. I really owe that to Catherine Deneuve, to the light touch in her performance.

Filmmaker: Parasite won at Cannes in 2019, Shoplifters won previous the previous year. Do you think it’s becoming easier for Asian films to be accepted throughout the world today?

Kore-eda: I consider Bong Joon-ho a good friend, and I know that he wasn’t well-known in the United States before Parasite. But he’s been a blockbuster superstar in Asia for a while now. So I’m hardly surprised [that he won]. We just hope that Asian films will continue to be recognized internationally.