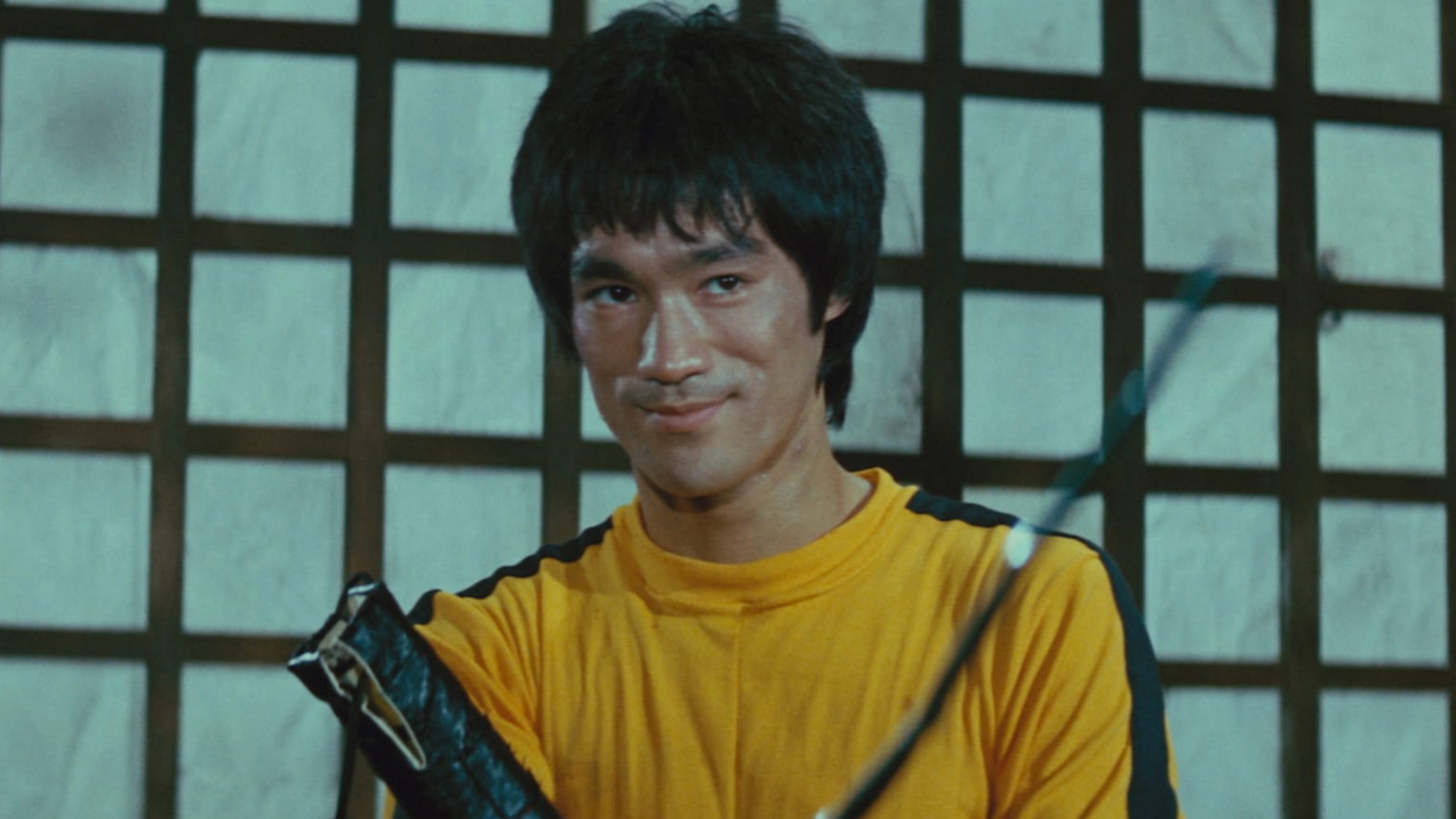 It’s often hard for me to avoid using superlatives when writing about the work done by the Criterion Collection, and they’ve made it even more difficult with their new Blu-ray set Bruce Lee: His Greatest Hits, a seven-disc package that ranks with the company’s best releases – which means it’s one of the best Blu-ray releases ever, period. The box contains the four features martial arts icon Lee made at the height of his powers (The Big Boss, Fist of Fury, Way of the Dragon, and Enter the Dragon) as well as two films cobbled together after his premature death in an effort to capitalize on his enormous celebrity (Game of Death and Game of Death II), plus biographical documentaries like Bruce Lee: The Man and the Legend and Bruce Lee: In His Own Words and well over a dozen hours of special features. Lee’s influence was staggering given his relatively small output; though he was a child star in Hong Kong and had a brief stint on American television in the 1960s (as referenced in Quentin Tarantino’s Once Upon a Time…in Hollywood), the four movies that solidified his iconic status were all released between 1971 and 1973. Yet in that short time, Lee changed world cinema; he revolutionized fight choreography with his more realistic, less theatrical style that borrowed from multiple schools of martial arts, and he paved the way for later stars like Jackie Chan and Jet Li by proving that there was an international market for Asian leading men. Criterion’s supplements, which include multiple commentary tracks, interviews with film scholars and collaborators, and alternate footage and deleted scenes, beautifully convey Lee’s artistic methods and philosophies and provide ample historical context to explain his impact on both movies and martial arts. The films themselves have never looked better, making this the definitive home video presentation of Lee’s work.

Milos Forman was coming off of an Oscar win and major popular success with One Flew Over the Cuckoo’s Nest when he directed the 1979 adaptation of the Broadway hit Hair, and his then recent Hollywood triumph is evident in the supreme directorial confidence he brings to the material. Jettisoning large portions of the stage version and reconceiving major characters and settings, Forman and screenwriter Michael Weller create a screen musical that delivers the traditional satisfactions of the genre in completely new ways; it’s as enjoyable as classic song-and-dance pictures like Singin’ in the Rain and An American in Paris but doesn’t look or sound anything like them. Forman shoots his story (an Oklahoma farm boy on his way to the Vietnam War stops off in New York and falls in with a group of hippies) on location with his usual sense of extremely precise journalistic detail, but the naturalism collides with Twyla Tharp’s stylized choreography and the seemingly limitless exuberance of the performers. Forman mostly ignores the source material’s more overt references to the counterculture and the war (much to the dissatisfaction of the play’s creators), but so carefully recreates the period in the costume and production design that the movie still works as a time capsule but feels alive and contemporary at the same time. It’s one of Forman’s many great movies about America that benefit from his slightly askew visitor’s eye; like Taking Off, Ragtime, and The People vs. Larry Flynt, it’s a celebration of America that somehow manages to be intensely passionate without losing its European sense of ironic detachment. Hair has been available on DVD and Blu-ray in multiple incarnations over the years, but all the previous versions pale in comparison to the new Olive Signature Edition, which contains hours of interviews with key personnel who worked on the picture both in front of and behind the camera. Tharp, assistant director Michael Hausman, editors Lynzee Klingman and Stanley Warnow, production designer Stuart Wurtzel, and most of the significant cast members (Treat Williams, John Savage, Beverly D’Angelo and more) all contribute memories and insights, and filmmaker and Forman student James Mangold provides a thoughtful appreciation of Forman’s directorial sensibility.

My final recommendation this week is Kino Lorber’s Blu-ray release of Bruce Wagner’s brilliant and bizarre Wild Palms, a mini-series that is just as impressive after 27 years of peak TV as it was in 1993 – and it was extremely impressive then, given that David Lynch’s Twin Peaks was really the only comparably inventive, challenging, and audacious program to grace the airwaves. Presumably it was Peaks’ cultural impact that inspired ABC to greenlight Wagner’s hilarious but acutely disturbing five-part limited series, a sci-fi noir set in a then futuristic Los Angeles where show business, religious cults, and politics cross-pollinate to generate equal parts paranoia, euphoria, and terror among the city’s denizens. Viewed today, Wagner’s prescience is so all-encompassing that one wonders if he had a time machine – the series’ foretelling of the ways in which the internet, virtual reality, and other technologies would be harnessed by autocratic individuals and corporations to call the nature of truth into question is positively chilling. It’s also quite beautiful thanks to the exacting and gorgeous images of cinematographer Phedon Papamichael and a remarkable collection of directors that includes Kathryn Bigelow, Keith Gordon, Phil Joanou, and Peter Hewitt, all of whom are in top form here and nicely apply their own predilections to Wagner’s intricate and ingenious scripts. Gordon, Joanou, Wagner and stars James Belushi and Dana Delaney all contribute commentary tracks to the Blu-ray, one of two new Kino releases showcasing Wagner’s work – the other, the Wagner-scripted Scenes From the Class Struggle in Beverly Hills (1989) is also well worth a look. After these screenwriting credits Wagner would go on to become, with novels like I’m Losing You, Still Holding, and Dead Stars, literature’s greatest chronicler of Hollywood mores since Nathaniel West; Wild Palms provides an indispensable early look at his unique blend of savage satire and deep empathy.