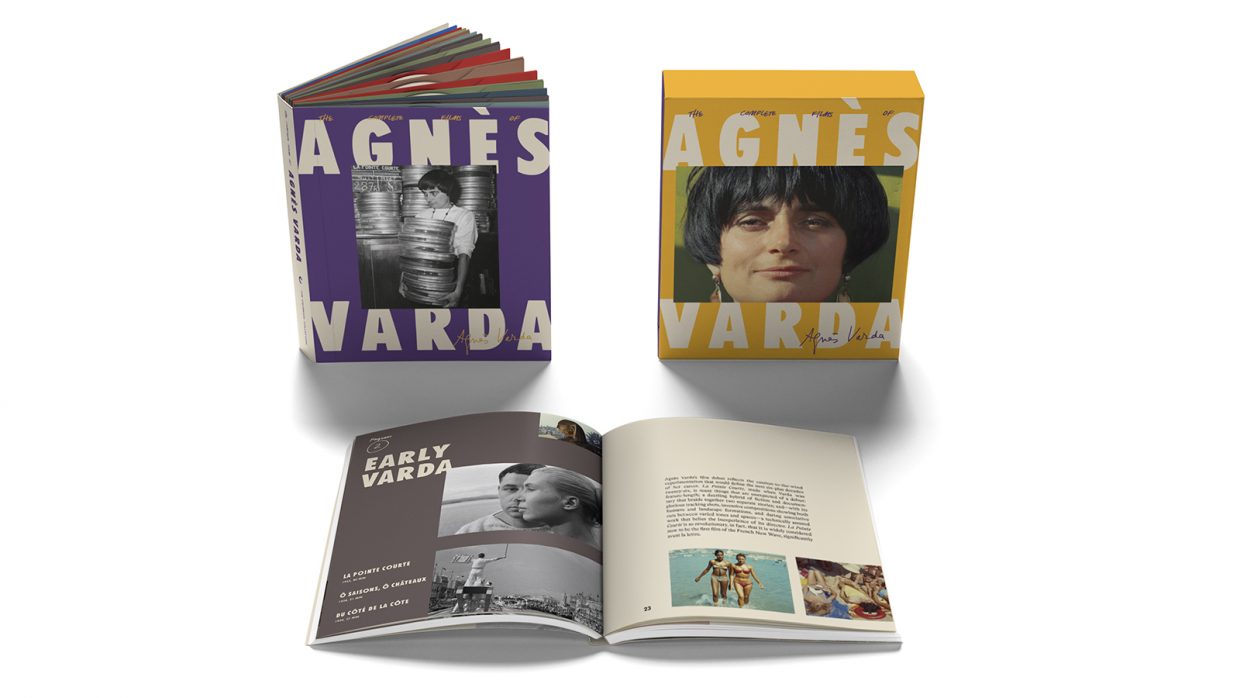 Earlier this year I wrote about Criterion’s Bruce Lee: His Greatest Hits boxed set and declared it one of the best Blu-ray releases of all time. Less than two months later, the producers at Criterion have already topped themselves with the 15-disc The Complete Films of Agnes Varda collection, a comprehensive look at the work of one of the French New Wave’s grand masters. The set contains 39 features and shorts, arranged not in chronological order but in a series of intelligently curated programs, as though the movies were being shown in a public retrospective; there are discs devoted to Varda’s early work, her time living and working in California, films dealing with marriage, and more, with Criterion’s usual bounty of illuminating supplements. In the last few years of her life Varda was showered with accolades, including a lifetime achievement Oscar and an honorary Palme d’Or. Yet watching her body of work in its entirety it quickly becomes clear that she remains, if anything, underrated – the breadth and depth of her output is matched only by its originality and refusal to be pinned down to existing categories. There are very few films here that can clearly be defined according to traditional terms, with the lines between fiction, documentary, and essay films not only blurred but nearly eradicated; the continuities are not those of genre, location, or even subject matter but of more fundamental concerns having to do with Varda’s bottomless empathy and curiosity. In one of the interviews included on the boxed set Varda talks about the impossibility of reconciling our private and public lives, and this is indeed an ongoing concern in her work. The irony is that no filmmaker ever united their private and public selves more successfully than Varda, who examined her own personal and political preoccupations with unwavering honesty and included so many of her friends and family members in her work that her filmography comprises something akin to a 100-hour documentary on her own life. I can think of few directors more worthy of deep study than Varda, and Criterion’s fantastic collection is the celebration of her career that she so richly deserves. It’s also the most satisfying and entertaining home viewing experience I’ve had in 2020.

It might seem like a bit of a leap to transition from Agnes Varda to a network television series based on a DC comic book, but Batwoman is no ordinary comic book show. Like Agnes Varda, Batwoman showrunner Caroline Dries is obsessed with the divide between our private and public selves, and while this is a common theme in comic books, Dries explores the idea in new and richly rewarding ways throughout the first season of Batwoman, which is newly available on Blu-ray. Set in a Gotham City where Bruce Wayne and his alter ego Batman have disappeared, Batwoman follows Wayne’s lesbian cousin Kate Kane (Ruby Rose) as she takes on his mantle and transforms herself into the title character. The fact that Kate is gay allows Dries to dig deeper into the usual questions of identity and social responsibility that are often raised in superhero stories, and she and her writers rigorously explore every ramification of their material. There are a lot of rich metaphors here, as in a storyline about Kate hiding the fact that she’s Batwoman from her powerful father (Dougray Scott) that addresses the complications of coming out with great wit and insight, and whether the show is operating on an allegorical level or a literal one (as in an achingly moving love story between Kate and the woman who got away), it’s always sharply conscious of the complicated connections between the personal and the social. It’s also one of the most impressive series on television in its tonal range, often veering from light comedy to agonizing tragedy and back again within the same episode; the installments written by Don Whitehead and Holly Henderson, whose work I’ve loved since Smallville, are particularly graceful in their juxtaposition of whip-smart comic dialogue and genuine pathos. On top of all of this, Batwoman is as varied in its visual approaches as it is in the writing, with directors like Holly Dale – one of the finest action auteurs currently working – deftly blending imagery from martial arts flicks, horror movies, and the Christopher Nolan Batman movies that remain the gold standard for this kind of thing, reconceiving the elements so that they form something new and exhilarating. The Batwoman: The Complete First Season Blu-ray showcases this work beautifully via gorgeous transfers and includes some nifty deleted scenes and other extras, making it a terrific way to discover the series.

Just as Batwoman breathes new life into the DC universe, Alex Kurtzman’s Star Trek: Discovery absorbs the philosophical and aesthetic sensibilities of the original Star Trek (as well as many of its subsequent incarnations) while striking out in bold new directions, offering plenty of pleasures for the uninitiated without leaving the franchise’s devoted fans behind. When it premiered in 2017 as the first scripted series on CBS All Access, I was immediately taken with both the sleek, elegant look of the show (which I interviewed director David Barrett about for this site), and the psychological complexity and diversity of the characters. Under Kurtzman’s guidance Star Trek: Discovery has gotten better and better and spun off several new Star Trek iterations; one of the more interesting offshoots has been a series of “Short Treks,” standalone 15-minute episodes that expand on the universe and give several supporting characters a chance to move to the center of the story. These short films were initially conceived as a sort of placeholder between seasons one and two of Discovery while the postproduction team worked on the series’ extensive visual effects, but they ended up providing the show’s writers and directors with valuable opportunities to experiment; in “Calypso,” for example, writers Michael Chabon and Sean Cochran tell a quiet, contemplative story that’s essentially a two-hander for actors Aldis Hodge and Annabelle Wallis, the latter of whom is never actually seen on screen. Director Olatunde Osunsanmi, who has directed many of the best Discovery episodes, finds subtle rhythms and nuances in the material and provides both a surprising amount of emotional heft for a 15-minute story and a lesson in how to find visual dynamism using a limited number of characters and locations. Chabon (who would ultimately become the showrunner of the superb Star Trek: Picard series) also contributes the script for “Q&A,” a similarly intimate short that depicts Spock’s (Ethan Peck) first day aboard the Enterprise and the bond he forms with his new colleague “Number One” (Rebecca Romijn). Chabon and director Mark Pellington turn the meeting into a lively sci-fi variation on classic romantic comedies like It Happened One Night; the actors’ sparkling chemistry and Pellington’s unerring instincts for how to visually convey their internal feelings yield a delightfully playful encounter that both invites and rewards repeat viewings. These and seven other “Short Trek” installments are now available on the Star Trek: Short Treks Blu-ray, which includes an outstanding array of extras – Kurtzman, Osunsanmi, Chabon, and many of the other writers and directors of the shorts are interviewed, and Kurtzman and writer/executive producer Jenny Lumet supply a spirited commentary track for the first short.

I want to close out today’s column with a quick recommendation for a movie that will be arriving on all the usual streaming platforms in a few weeks but opens today in drive-ins and theatres. First time feature director Luis Iga’s Murder in the Woods is a smart, funny, and very effective horror movie that recalls classics of the genre like Friday the 13th and Scream but has a voice and style all its own, as Iga takes the old premise of a group of friends trapped in a remote cabin and infuses it with so much enthusiasm and energy that he makes all the old conventions seem new again. It’s a terrific ride for horror fans, so if you are one I highly recommend seeking it out.