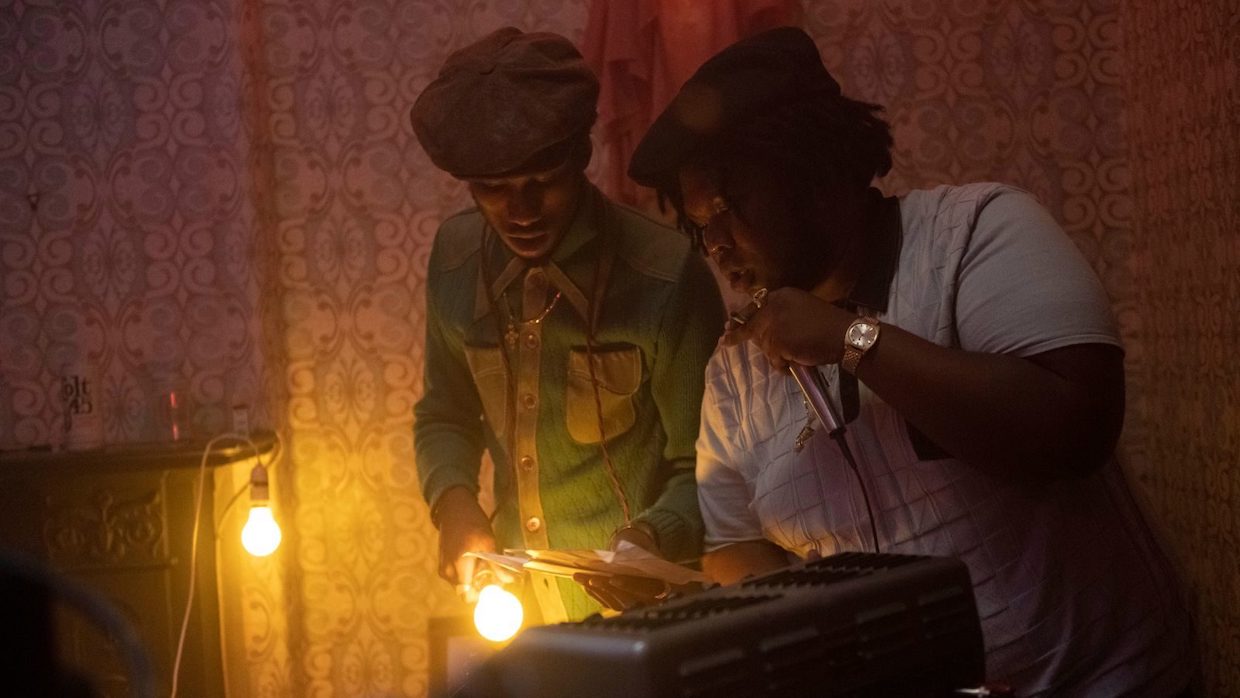 Steve McQueen: now with handheld camera! Lovers Rock is, per its official publicity copy, one of “A Collection of Five Films” about British West Indian life in the ’70s and ’80s drawn from the backgrounds and personal stories of McQueen’s friends and family. This party film is the only one not directly based on a true story but is instead based on collective experience; judging by synopses of the other four, it’s also the lightest thematically. That makes it a good fit for NYFF’s opening night selection (even if no actual opening night party will be following; two of the other films will also be showing the main slate). As a party movie, there are certain generic expectations: hazy good vibes, increasingly drunken punchlines, some kind of romantic coupling, probably a fight. Lovers Rock hits all but one of those—McQueen isn’t known for comedy. The setup is an all-night birthday party at a Ladbroke Grove house, but the birthday girl is rarely at the center of her own celebration, which is really a pretext to rig up a sound system and get down.

Narrative anchors Martha (Amarah-Jae St. Aubyn) and Franklyn (Micheal Ward) meet not-so-cute — while the latter’s friend aggressively hits on Martha’s more skittish companion Patty (Shaniqua Okwok), Franklyn sets in to mollify the waters while making a move of his own. The two wind up bonding over a night punctuated by one attempted rape, the unwelcome arrival of Martha’s drunk/angry cousin she hasn’t seen in years and perceptibly increasing amounts of booze. The first part introduces all its main characters, moves them around the house and plants potential plot arcs, the second is much more experiential and durational.

There are two big singalongs: one where Janet Kay’s “Silly Games” ends but the performers keep singing it a cappella, in flawless unison plus assorted solo vamping, without flubbing a single lyric, for five minutes. McQueen swears in the press kit the sequence was absolutely spontaneous and un-premeditated, but I have my doubts that there wasn’t at least a little ADR to sweeten things: the harmonies and solos are pristinely captured, the mix carefully increasing the volume of feet stomping to keep the beat. I’m also a bit skeptical about how the sequence lands, if only because it so clearly highlights itself as a Big Moment of spiritual transfiguration, where a community’s relationship to a musical object that belongs to them stands in for bigger ideals (tradition, diasporic strength etc.). A considerably later-in-the-AM singalong to the Revolutionaries’ “Kunta Kinte” seems less aimed at being overwhelming, placing more emphasis on near-moshpit etiquette and energy, but McQueen gives both considerable space to unfold—it’s all part of the experience.

McQueen’s unexpected fluidity in capturing an event channels his previous interest in sustained durational coups in an entirely different direction. No more prolonged Steadicam jogging or rigorously locked-in static frames: DP Shabier Kirchner repeatedly circles a dancefloor where the seams of the performers’ choreographed chaos never show: everyone seems legitimately messed up, if (mostly) benign in their rowdiness, as things wear on. The whole interior dancefloor is increasingly bathed in Wong Kar-wai red, the light filled out with lots of weed smoke for extra grain texture. The big dance sequence goes from close-ups on dancers’ upper bodies and midsections in the Claire Denis zone (lots of close-ups of hands) and sticks around for when the dry humping gets going, the camera moving its gaze down to the pelvic tier. There are, per McQueen’s more typical form, a surplus of crucifixes scattered throughout (notably and regrettably in the background of an unexpected moment of non-heterosexual physical affection, the better to emphasize the guilt such an experience could provoke). But the overall goal is clear and achieved: to recreate and celebrate a very particular community ritual, ignoring (as any movie aimed for adults should, really) any obligations to respectability. Other films in this anthology promise to overtly address racism and other topics whose claim to screen importance are supposed to speak for themselves; here, a rowdy night out is commemorated as a valuable formative experience just like any other. Which is how it should be.