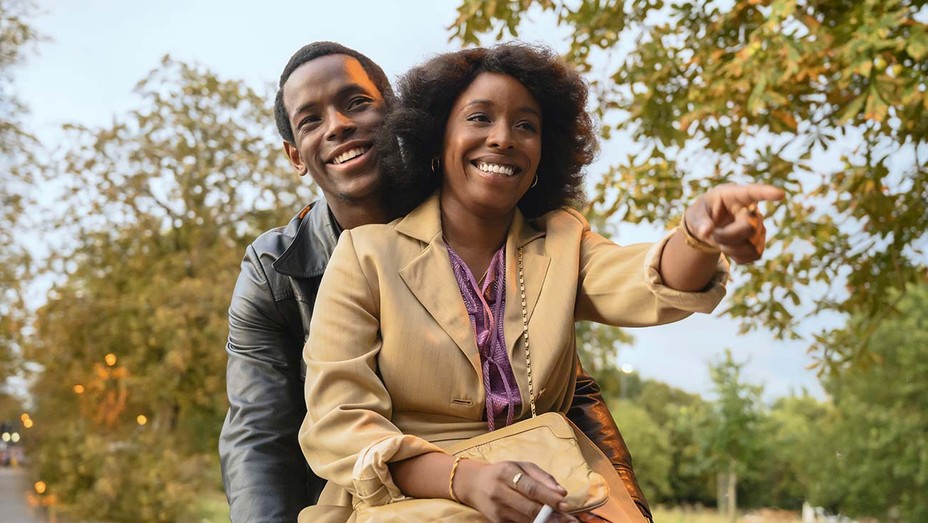 I’m not going to deny it — the dip in New York’s temperature signifying the approach of Fall coupled with the migration of the New York Film Festival from Lincoln Center to my Lower East Side living room has left me melancholy. Other out-of-town festivals I might have skipped this year, but there hasn’t been a New York Film Festival in 30 years that I haven’t attended at least a few screenings, to say nothing of the associated parties and events.

But while I’m missing the casual encounters in the lobbies, the spotlight that shines on the film teams post-screening in their box at the Alice Tully Hall, and, of course, the Tavern on the Green opening night, I’m thankful for the quality — and, yes, the ease — of this year’s necessarily digital event. (That is, unless you have a car, in which case you can attend one of the several drive-in screenings.) Indeed, it was another kind of thrill when the festival’s opener — an exuberant stunner by Steve McQueen — arrived in my in-box yesterday. So, as we all march through this strange moment together, here are a dozen or so titles that we either recommend or have reason to anticipate at this year’s New York Film Festival.

Lovers Rock. In these pandemic times, when most of us attending will be enjoying the New York Film Festival in our living rooms, possibly even on our laptops, the Opening Night picture, Steve McQueen’s Lover’s Rock, is a particularly cruel tease. One episode of a five-part BBC series — two others are also included in the NYFF — set to stream on Amazon in the States, Lovers Rock depicts over one evening circa 1980 the preparation, execution and aftermath of a Ladbroke Grove house party. Amidst the reggae grooves, sweaty bodies shimmering in the smokey haze, and moments of seduction and danger that flicker with every needle drop, there’s lovely romance interlaced with McQueen’s keen observations around politics and race in “Thatcher’s Britain.” And then there are extended passages of just pure visual and sonic pleasure, particularly in two soulful dance sequences that provide a vicarious thrill to all those lonely and housebound. — SM

Fauna. Nicolas Pereda’s ninth feature film takes his stock company and throws them, like a more oblique Hong Sang-soo, into a narrative divided into two related parts. The first part is an awkward family visit as an actor, who’s recently landed a part on Narcos, tags along to meet his girlfriend’s parents and shifty brother. The second part recasts all the actors in a new scenario that more directly engages with cartel narratives in a context so unexpected it’d be a shame to reveal it. — Vadim Rizov

The Woman Who Ran. Hong Sang-soo’s best film since 2017’s On the Beach at Night Alone and Claire’s Camera continues his ongoing trajectory from previous mainstays (heavy drinking, infidelity, pathological male behavior) down a kinder, literally more sober track. Two old friends meet for a reunion lunch and share gentle melancholy, Hong zeroing in on a dynamic that feels, as usual, completely lived-in. What’s new: a nearly De Palma emphasis on split-screens (apartment complex surveillance plays a minor part in the story) and a scene-stealing cameo from an adorable cat. — VR

Nomadland. With Nomadland Chloe Zhao has made a transporting work about a kind of graceful resignation, a road movie where the road represents not so much new possibility but a possible off-ramp. Frances McDormand plays Fern, a widow forced to leave her Nevada mining town home and live out of her van, scoring short-term gigs everywhere from kitchens to Amazon service centers. David Straitharn is a similarly bereft nomad who takes a shine to her, but the rest of the cast features the compelling non-actors Zhao and her crew encountered as they trekked across the West. Anchored by McDormand’s subtle and compassionate performance, the film is a succession of indelible moments that speak to loss and resilience, both personal and societal. — SM

Art Movie Hell. An evening guest curated by John Waters — who has never had a film at the New York Film Festival — completes the witty iconoclast’s one-two punch to the event’s sometimes staid sensibilities. First was his irreverent poster design, which deployed early 20th century fairground graphics to satirize the respectability politics of today’s non-profit film events. And second is this evening, a double-feature of Pier Paolo Pasolini’s transgressive masterpiece Salò — an adaptation of the Marquise de Sade’s 120 Days of Sodom transposed to the final days of the Mussolini era — and Gaspar Noe’s recent Climax (another one-night party film, although with LCD-laced punch that delivers a decidedly much worse trip than the evening in Lovers Rock). Waters isn’t the first to come up the Noe/Pasolini pairing — Noe himself chose Salò to pair with his own I Stand Alone at the IFC Center in 2006. But with Salò a canonical reference for Climax‘s ensemble depravity — its VHS spine can be seen early in the picture — the evening’s is a particularly apt double bill, and one that, given Salò’s extended scenes of coprophagia, you may be grateful to be viewing at home. (Speaking of Salò and the New York Film Festival, this 2020 edition represents a return engagement for the picture; it had its U.S. premiere at Alice Tully Hall in 1977. The New York Times Vincent Canby panned the film, writing, “Salò is, I think, a perfect example of the kind of material that, theoretically, anyway, can be acceptable on paper but becomes so repugnant when visualized on the screen that it further dehumanizes the human spirit, which is supposed to be the artist’s concern.” For others, like Gary Indiana, whose obsession with the film he chronicled in a 2001 BFI monograph, the picture was prescient. He saw it as a parable of late capitalism, where “a limitless choice of gratifications disguises an absence of all choice and all resistance, where nothing can disrupt the smooth operation of a system that turns art into products and people into things…. Salò is the very model of life as most have it in the 20th century, a metaphor of feudalism as reinvented by the multinational corporation.) — SM

Undine. On break from his longtime collaboration with actress Nina Hoss, Christian Petzold’s second film with Paula Beer after Transit is a pleasantly mystifying riff on the ancient legend of the water nymph. Merging that myth with yet another riff circling Vertigo territory, Petzold maps his narrative quite literally on top of lectures about Berlin’s construction and geographical layout history. — VR

Slow Machine. Today’s pandemic production etiquette dictates various production pods, where departments segregate from one another, connecting sometimes just through Zoom calls. But there’s another production model that’s perfect for pandemic times, and that’s the microbudget feature model, typified by Paul Felton and Joe DeNardo’s Slow Machine. With only a three-person crew, the directing duo have made, wrote Giovanni Marchini Camia out of Rotterdam, “a lo-fi, Brooklyn variant of Inland Empire” about an on-the-edge Brooklyn theater actress. Chloe Sevigny plays, seemingly, herself in one scene. — SM

French Exit. Michelle Pfeiffer stars in Azazel Jacobs’s adaptation of of Patrick DeWitt’s best-selling novel about a broke New York socialite decamping for Paris with her son (Lucas Hedges) and talking small cat (voice by Tracy Letts). Pfeiffer was extraordinary in Andrew Dosunmu’s Where is Kyra?, and Jacobs beautifully essayed late-life epiphanies in The Lovers, so this should be an inspired pairing. — SM

The Tango of the Widower and Its Distorting Mirror. The late great Raul Ruiz — who I owe an early filmmaking debt — is represented at the New York Film Festival this year with a posthumously realized work that would have been his 1973 debut if he hadn’t abandoned it following the Pinochet coup. Ruiz’s wife, Valeria Sarmiento, discovered the original 35mm cut narrative and hired lip readers to re-script the lost audio tracks for this tale of a widower haunted by the vision of his suicided wife. — SM

Currents Shorts. NYFF’s slate for experimental-(leaning) cinema is now “Currents,” which includes eight programs of shorts. I’ve only had a chance so far to preview the first, “Remains to Be Seen,” which includes Vika Kirchenbauer’s academically inflected UNTITLED SEQUENCE OF GAPS (a kind of essay film that includes a new visual take on golden showers I’ve certainly never seen before) and finishes strong with Jafar Panahi’s newest short, Hidden, where he finds a fresh new way to position two cameras in one car after the driving diptych of Taxi and 3 Faces. — VR

The Plastic House. Allison Chhorn’s 44-minute debut feature, an Akerman-inflected portrait of a young woman working alone in her parents’ greenhouse after their death, is a timely, formally impeccable portrait of solitude and grief. Serving as her own writer, director, cinematographer, editor, sound designer and main performer, Chhorn makes a strong first impression. More here. — VR