Self Reflection in Theater Two 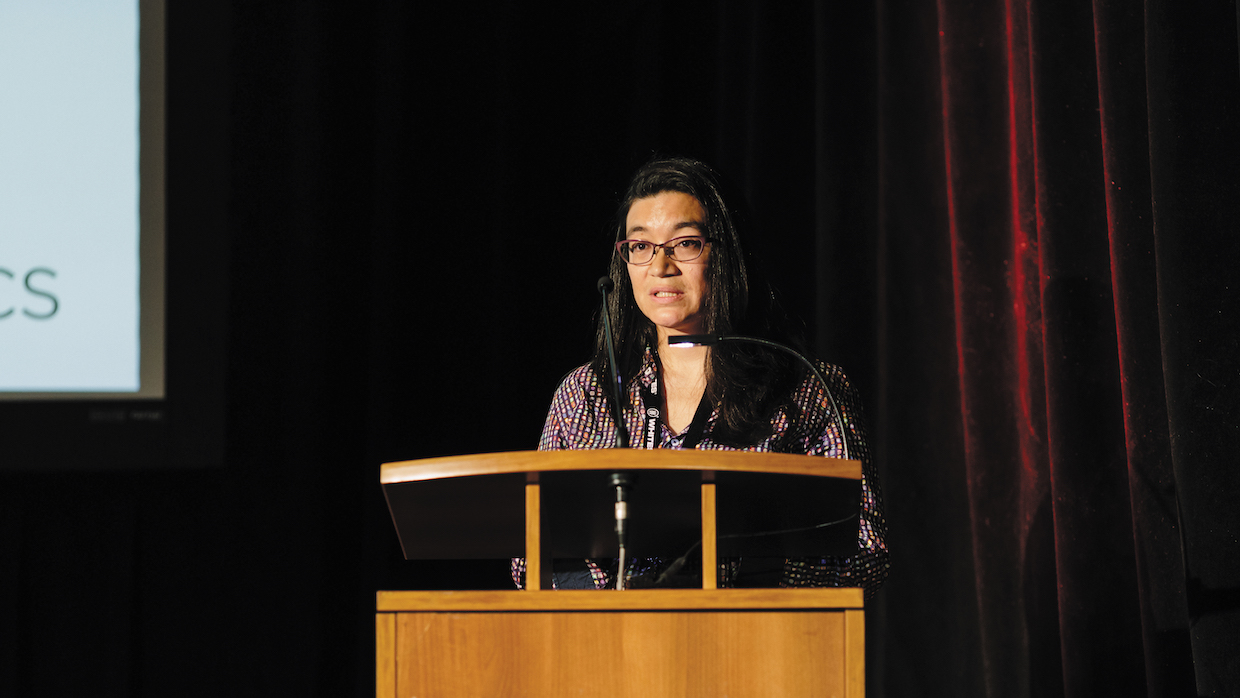 Over the past year, various reckonings—from continued collective and individual action around #metoo to protests against institutions accepting donations from the Sackler family, Warren B. Kanders and oil giants like BP—that media and arts institutions have gone through have brought the weaponization of cultural capital via art-world philanthropy onto the front pages of newspapers. Meanwhile, in the U.S. documentary film field, the way we’re talking about who holds power and how it’s dispensed has remained narrowly focused.

Film festivals have jumped into this fray with public forums, panels and talks at which emboldened filmmakers and a new crop of festival directors and programmers debate thorny questions: how to resolve documentary film’s colonialist origins, advance racial justice in the U.S. documentary field and support female filmmakers. Keynotes by Lisa Valencia-Svensson at Hot Docs, Orwa Nyrabia, Michèle Stephenson and Chi-hui Yang at the IDA’s Getting Real conference and various panels and events at many, many other festivals have critiqued the industry for ignoring the power dynamics shaping the making of nonfiction films. It’s a curious but expected onslaught, resulting in the institutionalization of these critiques and signaling that the powers-that-be are not only receptive to, but seek to embody, #decolonizedocs ideas—without perceptible evidence of structural change.

Publicly announced initiatives in response to #metoo and #OscarsSoWhite (#DocsSoWhite) have hinged on diversity efforts such as large foundations re-committing to funding filmmakers, projects and organizations that purportedly seek to diversify representation in front of and behind the camera. Festival programmers are screening the resulting films and instituting programming quotas for films directed or co-directed by women and people of color. These newly announced quotas are a step toward making the film industry a more equitable place for folks of all genders and races. They are well meaning. They are not enough. The act of publishing festival press releases announcing the exact percentages of very limited demographic information about the directors of selected films is justified by arguments for normalizing these changes and making them industry standards. In practice, however, this publicity amounts to a feel-good exercise for programmers and documentary audiences, both of whom are mostly college-educated, middle-class white people.

In the middle of this churning, this spring I wrapped up three years programming for True/False Film Fest, my hometown film festival. True/False thought broadly about what a festival should and could be, giving me the freedom to execute all sorts of unorthodox anti-panels and start partnerships with organizations advocating for a more inclusive and diverse documentary industry. But even while working as part of that consensus-based programming team, I couldn’t shake the sense that the current framework around how to more ethically and equitably program documentary films—and how to better recognize exploitative filmmaking—is deeply inadequate. If we programmers and festival heads are indeed starting to ask the questions everyone is asking us to ask, but doing it without putting ourselves in the line of questioning, who stands to gain more from these performances of politics: marginalized filmmakers or the festivals?

Public debates about power in documentary film, or colonialist and extractive practices, educate festival and institutional audiences, but rarely is there space for airing out deeper questions about why these problems exist. What are the power structures within the host institutions—which, in documentary film, often do not like to think of themselves as institutions with power, given the supposed inherent goodness and pseudo-activism of programming documentaries—that have abetted these flawed dynamics in the first place? Many of the cries for reform, in turn, call on programmers and other gatekeepers to enact certain reforms and spread them throughout the industry. But we are also the very people tasked with upholding the status quo in often deeply implicit and unexpected ways.

With an eye toward finding other folks and spaces questioning basic industry assumptions, this past year I’ve visited festivals and other industry spaces. Within the United States, these stops included the uber-filmmaker-friendly Maryland Film Festival, the radical celebration of Black and Indigenous voices at BlackStar Film Festival, a short stop at the SFFILM’s FilmHouse residency and a weeklong immersion in the 65th Flaherty Seminar. At Maryland, the attendance for industry panels was often paltry, competing against a plethora of well-curated screenings and other filmmaker-focused social events. At BlackStar, the energetic panels and live audiences, stacked with thinkers and makers and refreshingly open to experimental visions, came the closest to making spaces where challenging conversations could occur, yet the material and labor limits of a single festival operating in a capitalistic society were rarely acknowledged. None of these spaces alone can enact deep systemic change.

Besides the often-conflicting mandates of U.S. festivals to support “crowd-pleasing” work and satisfy a bevy of stakeholders able to pay to play, film festivals have completely bought into the celebratory nature of our events. As one example, the program notes for festivals—even when they aren’t directly cribbed from the film’s own publicity materials or another festival and are written by the festival’s own programmers—unfortunately double as advertising copy for the film, with little room for nuance. I have often been assigned to write blurbs for films I didn’t support being programmed. On festival website archives, my name is seemingly proudly attached to breathless adulations, lauding the politics and aesthetics of these films, that also explain how the film is innovative and new. This approach is dangerous because it often ignores the historicity of the film’s production and references. It additionally erases the thinking that imperfect films might also be worth experiencing (and paying to experience)—and I believe that all films have flaws. But festivals demanding premiere status, as well as those aspiring to such A-list designation, are locked into the current system. There is a very real fear of losing the trust of both established and emerging filmmakers if any official communication from the festival displays less than total confidence in the film.

Beyond the admittedly small example of program-note writing, festivals rely on an opaqueness that, most worryingly, appears to be transparent. This applies to the submissions and solicitations process, decision-making hierarchy around inviting films, premiere jockeying among festivals and filmmakers in high demand, and even the scheduling of films once the filmmakers and sales agents and distributors have accepted the invitations. Granted, there have been some recent peeks behind the curtain, from Nyrabia’s Facebook post on the compromised funding of the newly formed Red Sea International Film Festival to Luke Moody’s statement in Sight & Sound, on his resignation from Sheffield Doc/Fest after three years as director of programming: “[The board’s] anchor is the festival as it was 10, 20 years ago—putting forward colonial forms of filmmaking, annually offering and pressuring to include content only relevant to a domestic market and directed by white men over 40. The chimney needs sweeping before a fire can be lit.” Grumblings about programming and misgivings about individual films are very common in private conversations among programmers, industry gatekeepers and some filmmakers; in the public sphere, there’s a united front.

I fear that this state of affairs makes festivals inherently compromised places to hold public conversations about power in a generative, sincere way because that means being honest and open about how power is wielded. Furthermore, things that are done in public are recorded. We know as filmmakers, writers and curators of documentary film that cameras and the possibility of being on the record fundamentally change interactions—not in an inherently good or bad way, it just is so.

This lack of transparency does create one interesting space for action. Whether in public or in private, filmmakers who are alumni or even those presenting films in the current edition have a great deal of influence with gatekeepers to bring up issues and make demands that those in charge internally cannot see or refuse to see. Often, concerns that outsiders bring up have long been identified internally but not acted upon.

Unfortunately, I look around independent documentary and find that institutional critique by filmmakers about festivals and how they’re run is in short supply. I know of John Wilson’s Vimeo-commissioned short on Sundance, a piercing critique of the exclusionary effects of Sundance’s built landscape and industry-dominated spaces, and Charlie Lyne’s Sight & Sound-commissioned documentary on Sheffield Doc/Fest, which he utilized to investigate the curiosity of an egalitarian festival badge contrasted with the ever-present hotel hierarchy employed by festivals to separate its guests into definable tiers. (Lyne gives out the insider tip that the industry hangout at the end of the evenings is in fact the lobby bar of the Mercure Hotel, the most exclusive and expensive of the accommodations, and that it’s possible to hobnob with gatekeepers and filmmakers without having a pass at all if you know where to go.) There’s also Zia Anger’s My First Film, a scathing live performance about the inherent misogyny in independent film and the flattening language of commercialism, as well as the false promises of film school and a system that supposedly rewards dedication and hard work.

The fact that two of these films are commissioned from within the industry strikes me as a sign that staff inside their respective institutions are looking for help from filmmakers and others outside institutions to challenge, critique and offer alternatives. The recent professionalization of documentary filmmaking, with the overgrowing plethora of fellowships, grants and residencies, makes this mission more urgent: These systems are becoming entrenched without being questioned. We all need to work through what is merely a symptom of a problem—of which documentary has many, just like this world we all live in—and what are the structures of labor, material production and cultural prestige that keep these problematic systems in place.