“I Wanted the Movie to Have a ‘Time Out of Time’ Feel”: Cinematographer Eric Branco on Shooting the Black-and-White The 40-Year-Old Version 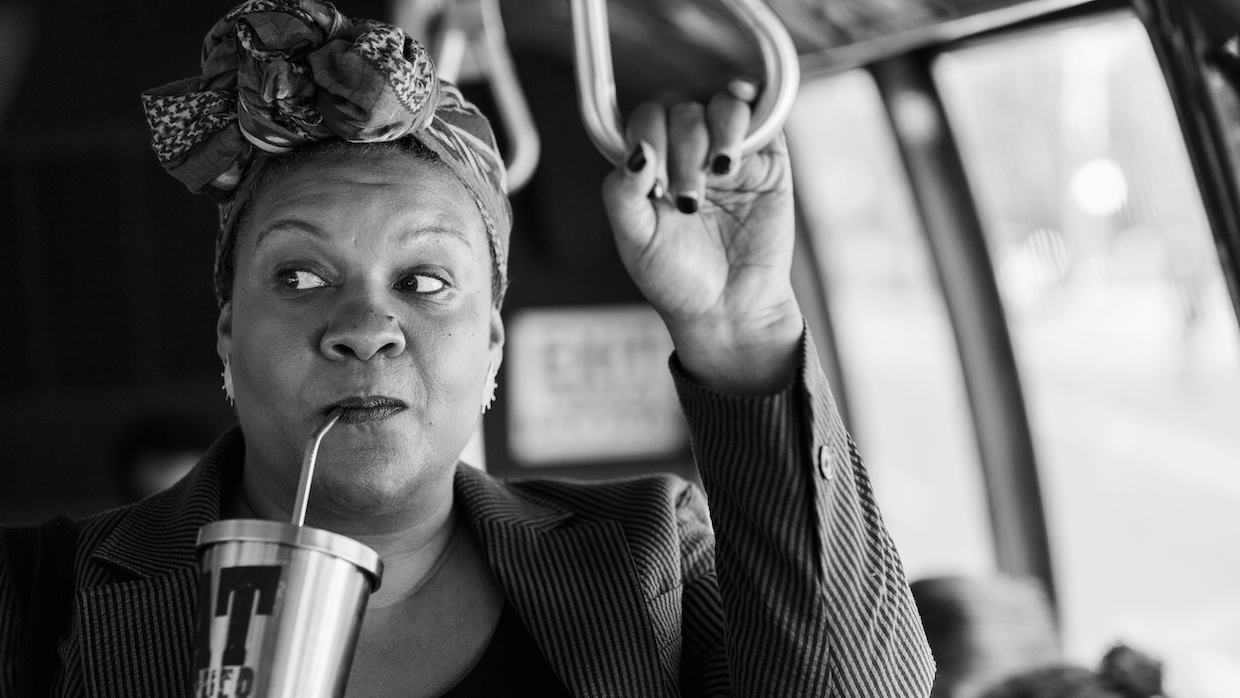 by Daniel Eagan
in Cinematographers, Interviews
on Oct 30, 2020

On the title page of her script for The 40-Year-Old Version, director and star Radha Blank wrote: “A New York Tale in Black and White.” Cinematographer Eric Branco took those words to heart, shooting the Netflix production almost entirely on Kodak Double X film.

In the film Blank plays an alternate of herself, a playwright once named in a “30 Under 30” list of artists to watch, now trying to reinvent herself as the rapper RadhaMUSPrime. Over the 20-day schedule, Branco shot almost entirely on locations in Manhattan and the Bronx, from apartments to studios, clubs, theaters, and crowded streets.

Before The 40-Year-Old Version, Branco shot the short Cap in black-and-white 16mm, and the feature Clemency. He is currently working on a project for HBO Max. He spoke with Filmmaker by telephone.

Filmmaker: How is shooting under the new pandemic protocols?

Branco: I feel like a film set is the safest place I could be right now. Certainly safer than the White House. Everyone’s tested three times a week, even with testing you have to wear masks. It’s frustrating to have a mask on all day, but I’ll deal with it.

Filmmaker: What led up to working on The 40-Year-Old Version?

Branco: A couple of years ago, right before I shot Clemency, I decided I was using color too much to draw the eye. I wanted to focus on drawing the eye using only contrast. So I sold my digital camera, bought a still camera, and loaded it with black-and-white film. I shot that way for about a year, teaching myself how to see the world in black-and-white. That really helped when I shot Cap [directed by Marshall Tyler]. It won a short film competition at the American Black Film Festival. Then I got the script to The 40-Year-Old Version and met with Radha in New York.

Filmmaker: Ms. Blank has a background in theater and performance art. This is her first film. How did the two of you arrive at a visual style?

Branco: Radha felt very strongly about a few things. She wanted to shoot on black-and-white — that was her mandate from the beginning. This film was going to be black-and-white even before I was involved. Also she wanted to shoot on film. And she wanted to shoot every scene in a oner. Every scene was designed to be played that way. Obviously there were some cuts, some scenes stitched together from multiple takes. But we were not doing any kind of cross-coverage or things like that. It was all very carefully blocked so that everything could be presented in one frame.

Filmmaker: What camera did you choose?

Branco: We shot on the Arricam LT, converted for four-perf movement, with Zeiss Super Speeds from the ’70s. For about 90 percent of the film we used Kodak Double-X, a beautiful old stock that hasn’t really been updated since the ’60s. It’s what they shot Manhattan and Raging Bull on.

I wanted the movie to have a “time out of time” feel. We’re shooting on film with old lenses, but the camera movement and lighting style is more modern. Hopefully when all things combine you can’t quite place when the movie is occurring.

Branco: It’s slow by modern standards, 200 ASA. Which meant this film required a lot of light. When Double-X was popular, lighting was a bit more stylized: key light, back light, fill light. More “Hollywood,” more modeled. We were trying to shoot in a more natural style, softer light, not necessarily using fill and back lights.

In another interview they asked how much of 40 was shot using available light, and I had to say, “None of this movie is available light.” It’s quite a compliment if you think I walked in with a camera and found perfect lighting for each character standing there. But there’s not one frame in this film where it wasn’t 150 degrees on the set when we were shooting because of all the lights we were using. 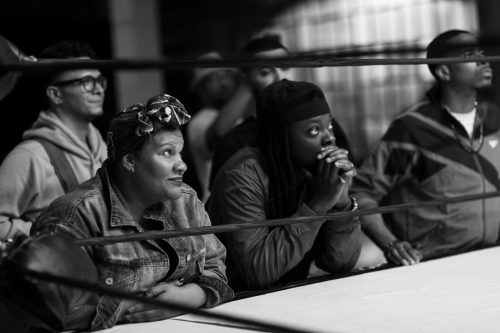 Filmmaker: What was your lighting package?

Branco: Our package was not large. Most days we were just replacing bulbs and building rigs.  I had an amazing gaffer, Tyler Harmon-Townsend, and my key grip was Scott DeAngelo. They were key. In one of my favorite scenes in the movie, Radha meets J. Whitman [Reed Birney] in an Upper West Side restaurant. There were these wonderful lights wrapping around pillars. Tyler built a couple of rigs copying those ring lights that we could angle and arm in on speed rails.

So that was a set without any “movie” lights, but one that was washed in this soft, sort of old Hollywood glam light. There’s a moment when Reed tilts his head back, and in his eyeglasses you see the reflection of the tungsten bulbs. It gives me a warm feeling every time I see it.

Our basic approach was very small lights strategically placed. We threw most of our lighting budget at a couple of days. There’s a big oner argument between Radha and her agent Archie [Peter Kim] where we’re kind of all over his apartment. Sun is skipping in his windows and off the floors, kind of uplighting them a bit. That was a pouring rain, gray day. All that sunlight is manufactured. Six HMIs punching through every window.

Filmmaker: What about shooting in streets at night?

Branco: We could have put big lights up at the end of the block to get an exposure on Double-X, but that’s not what New York at night looks like. We wanted to present New York as it exists, which at night is a lot of different small points of light rather than one big source.

I fought to do some tests on color stock at Colorlab, which we used for processing. So for night we ended up shooting Kodak 5219 exposed for 200 ASA, pushed two stops and with a bleach bypass to help retain some of the silver on the negative to make it feel closer to black-and-white. I think the silver is kind of what gives black-and-white film its magical, ethereal glow. Short of switching out streetlights for 2Ks, that was how it was going to have to be. We converted the color back to black-and-white in the DI.

Black-and-white stock does not have opaque rem-jet backing, it has a slight anti-halation backing. Any bright source of light contaminates the surrounding area in a way that doesn’t happen with on color. There are a couple of scenes where we added some of that glow onto the color stock.

Filmmaker: Radha boards a bus early in the movie, and you film her inside as it travels to the next few stops. How did you light that?

Branco: We rented the bus for a day, and chose a route that headed south. We shot early in the morning so the light was coming from the east, and we chose buildings opposite that were brightly colored, without a lot of windows. We used those buildings as bounce light.

Filmmaker: You shoot several performances, including a “Queen of the Ring” competition among rappers. How do you block those scenes, while maintaining momentum between takes?

Branco: It’s about lighting the space in such a way that I could shoot anywhere I want and it will look good. So I don’t have to pause to say I need to adjust this light or move this stand. For the Queen of the Ring, everything was rigged from above, so we could shoot 360 and know everything in the ring to about six feet out would be exposed the way we wanted. From that point you’re just letting go, shoot until the film runs out, reload and shoot again.

It was kind of a half-documentary. All those rappers were real, Radha was a fan and asked them to be part of this. A lot of them were not used to being on camera. I had a game plan when I hopped in the ring, but also had to go with the flow with what they were doing. We did maybe two or three takes on each, then kept moving. I would pop out and get some reaction shots of Radha and D [Oswin Benjamin] and the other freestyle rhymes that were happening.

Filmmaker: How you frame the rappers, your decision to go in close on them or pull back, that’s contributing to the performance.

Branco: That’s kind of second nature from cutting my teeth on very low-budget rap videos. You develop an instinct for when to push in, or catch a reaction. I think a lot of that on-the-fly shot selection was informed by my background in shooting videos.

Filmmaker: You shot some scenes involving Radha’s play in color.

Branco: We wanted to shoot those on 16mm rather than 35mm, but we just couldn’t afford two camera packages. One day we had a eureka moment, “Wait a minute, why don’t we just close down the gate until it’s the same size as Super 16?” There is quite a bit of unused 35mm around all that stuff.

We shot the interviews with people on the street with an iPhone, and we used Canon video cameras for what was supposed to be a NY1 interview with Frank Dilella.

Filmmaker: When we started this call you were talking about experimenting with filtration at a equipment rental house in Los Angeles.

Branco: When black-and-white was the industry standard, color filtration was used quite often. If you wanted to make the sky in a desert landscape darker, you might use a red filter. Or to shoot a red rose, a green filter would darken the petals, but lighten the surrounding green, pushing it into the background.

These filters were well established to make the skin tone of Caucasian actors pop. They fell into the orange-pink spectrum, say a peach or coral filter to give an actress’s cheeks extra sparkle. Those standards weren’t developed for darker-skinned actors because they weren’t in the forefront.

When I got the call for this film, I was in a rental house trying to come up with filter cocktails for darker skins. My recipes came from older filters, sepia-toned, tobacco or chocolate filters which are these rich browns. They’re not used much these days because that kind of work is done in the DI. If you want a dusty Western, for example, you’re not doing that with filtration anymore, you’re doing it in the color grade. So I went through them all and did a bunch of tests. And so most of the shots in 40 have some kind of color filtration to make Radha’s skin pop.

Usually when I’m shooting digital I will expose for the darkest person in the room. I’d rather bring down the skin tones that are overexposed than lift up the darker tones that might get noisier or blocky. Shooting film is kind of the opposite. I found myself exposing for Radha’s skin most of the time. Most of our filter combos were built for her tone. Through testing we found that if she looked good, everyone else would fall into place.