Here are articles of interest I’ve bookmarked over the last few days in my Instapaper.

Egoyan speaks in a matter-of-fact tone. Able to transcend the pettier concerns of a frequently petty industry, thanks to a sophisticated world view, trenchant sense of humour and healthy dose of Canadian humility, Egoyan sees the shifting business model as the result of technological change and financial trepidation.

“I noticed the shift really started happening in the mid-’90s, when independent movies became the new American dream,” he says.

Egoyan says the romantic ideal of making a movie motivated by personal expression — not commercial pressure — got wound up with the American ethos and quickly became a beacon for wannabes.

“Very quickly, things became oversaturated,” says Egoyan, whose own career rose above the flood with the success of The Sweet Hereafter. “(The movement) made people really excited about independent film, but often without the attendant education (in film).”

At Twitch, Philip Ridley is interviewed about his new film, Heartless, which is said to harken back to the “to the folklore-infused psychological terrain of The Reflecting Skin, and the murky physical terrain of The Krays, which he wrote in 1990.”

In the New York Times, Jonah Weiner interviews Todd Solondz on the release of his new Life During Wartime. From the piece:

Philip Seymour Hoffman, who played Allen, the obscene caller, in “Happiness,” said in a phone interview: “Todd isn’t glib. He’s truly contemplative.” Mr. Hoffman recalled the discomfort he felt on the set playing a character who gruntingly masturbates at one point, phone in hand. “I remember once saying to Todd, ‘People are going to laugh at me.’ Just doing it, there was such a vulnerability that I became really self-conscious. And Todd said, very calming, ‘I think they’re going to feel for you.’ In saying that, he was telling me, ‘I want you to find a way to feel for him.’ He has huge empathy for these characters. He’s not sitting there judging them.”

PsyBlog has seven tips to boost your creativity.

Vice Magazine notes the odd marketing materials of a company called See and Be Safe. From Vice:

See and Be Safe make stickers and slap bracelets (no shit) that make it easier for you to BE seen. My favorite person in this company is whoever’s in charge of their marketing department. Their promotional video is one of the better pieces of avant-garde filmmaking I’ve seen in quite some time. The video begins with an equation: visibility reduced = reduced visibility.

The director then drives stalker-ly past joggers in what looks like Harlem before bringing in a soundtrack that sounds like Cat Stevens with maracas. As the tempo comes alive, the audience is put on the hood of a car driving towards a busy intersection where a lonely senior citizen in a wheelchair rests in the goddamn road with nothing to protect her aside from her trusty See and Be Safe vest and slap bracelets.

The video below looks to me to like an outtake from Trash Humpers.

The great website that chronicles all things East Village, EV Grieve, notes the transformation of downtown hub for physical media, the Virgin Megastore, into the “world’s largest Duane Reade.’ They even have food. 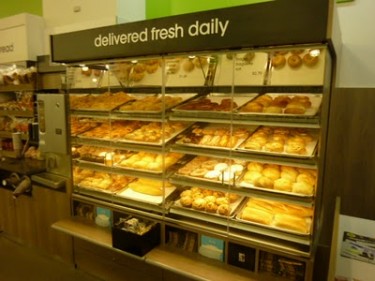 Chuck Tryon has part two of his “Video Games as Art” series up. He also links to Filmmaker and comments on the Auschwitz/”I Will Survive” video I posted last week, noting that the video has actually two more parts. Part Two features the family dancing to Leonard Cohen music in Australia while in Part Three the family journeys to Poland where the grandfather remembers his travel to Auschwitz. Whatever you think of the overall piece, this is a case where the YouTube time 10-minute time limit, which required the video to be broken into parts, probably worked against the artist’s overall intent.

Tomorrow morning on the blog we’re premiering the first of a seven-part series on filmmakers and creativity from the New Breed. Hope to see you back here.